A twin-stick shooter that’s sharper than a cactus spine.

You’d be forgiven for thinking that the title of twin-stick shooter Assault Android Cactus+ wasn’t just randomly generated by a computer. You do in fact control an android police officer named Cactus and assault waves of machines intent on doing you harm. Originally, it released on PC in 2015, but the Switch version features a new Campaign+ mode that remixes the stages of the base Campaign. With plenty of unlockables and a heavy focus on competing for high scores across a variety of online leaderboards, Assault Android Cactus+ makes a great first impression.

In true arcade fashion, the primary gameplay centers on running around compact stages obliterating the onslaught of mechanized minions hellbent on destroying you. Assault Android Cactus+ calls to mind classics like Smash TV and Robotron 2084, but here each stage features new layouts and mechanics that add variety to the basic objective of killing everything that comes at you. As you take down enemies, you acquire energy that improves the capability of your primary weapon, which includes machine guns, seeker shots, spread shots, and shotguns. You unlock new androids up to a total of 9, and each has a different primary and also secondary weapon, with the latter able to deal heavy damage but unable to be spammed repeatedly.

Twin-stick shooters live and die by how well they play and how fun their inherent repetition is, and fortunately Assault Android Cactus+ has a very satisfying hook to it. Each of the 25 stages lasts only a matter of minutes, and many have unique designs that constantly change the playing field. Unlike something like Smash TV where all the action happens inside a single-screen room, the stages of Assault Android Cactus+ provide moments of both being claustrophobically pressed into a corner and frantically running down narrow paths, around pillars, and across shifting platforms. Defeated enemies regularly drop power-ups that temporarily increase your firepower, immobilize all enemies on-screen, or boost your movement speed. At the same time, your android also has a battery meter at the top of the screen that slowly ticks down, so you have to collect battery recharge items to keep the meter up. While taking damage can temporarily knock you down, you only lose if the battery runs out, and this mechanic means you are able to take more risks to collect power-ups without worrying about dying. It’s great to not have to play conservatively in a game this fast and frenetic. 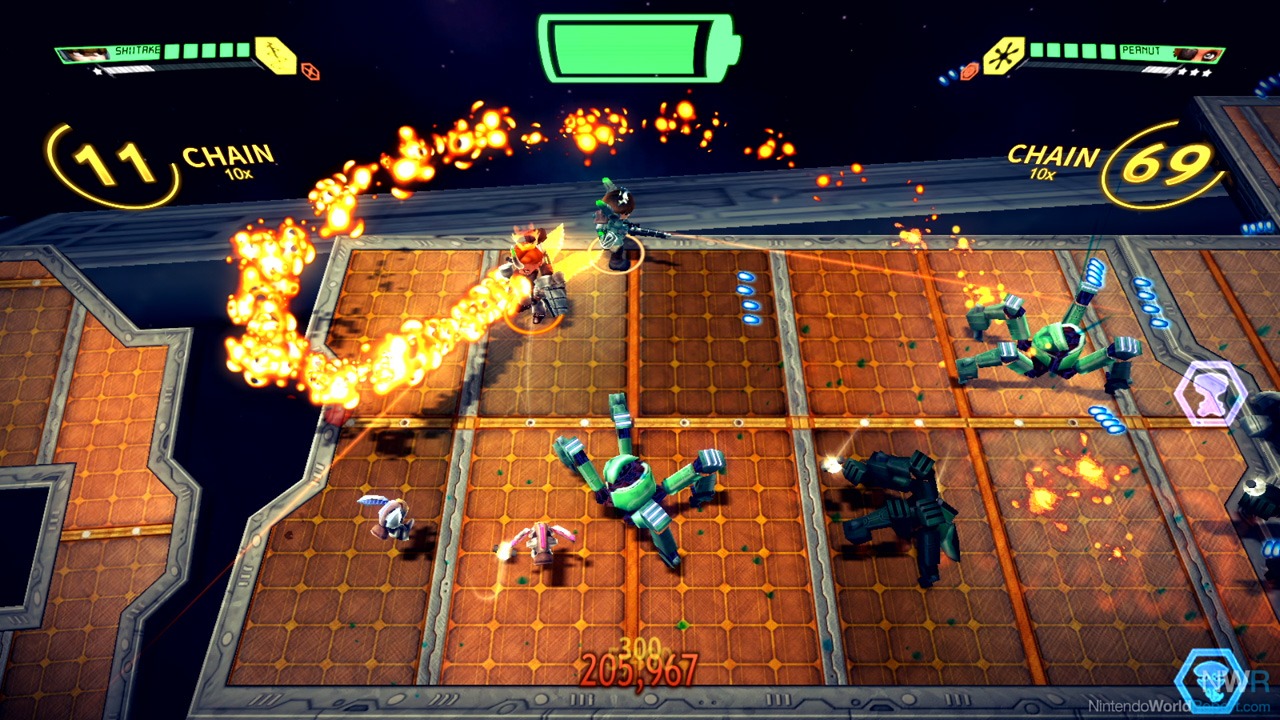 The story sees you guide Cactus or any of the other androids through a malfunctioning space freighter that is under siege by its own robots. The cartoon aesthetic works well with the light-hearted writing and dialogue, but the techno, sci-fi-themed music is largely background noise, with the exception of a few bangers. Assault Android Cactus+ runs well on the Switch and looks clear and smooth in handheld mode, but presentation isn’t what sells the game.

The replay value here is extremely high. Each stage awards a letter grade based on your score, with knockdowns reducing your total. As your grade is determined, your online ranking for each stage is also shown on the right side of the screen, quickly tabulating as your points are added up. It’s extremely satisfying to see all of the results at the end of each stage, and it’s a great motivator for replaying stages to improve your grade and ranking. There is an online leaderboard and local four-player co-op for every level and mode in the game, including the boss rush and the horde mode-like infinity and daily drives. Finally, special options can be unlocked by spending in-game credits earned through gameplay, and the options include a first-person camera, different visual filters, and mega weapons (super-powered replacements for your secondary weapons). 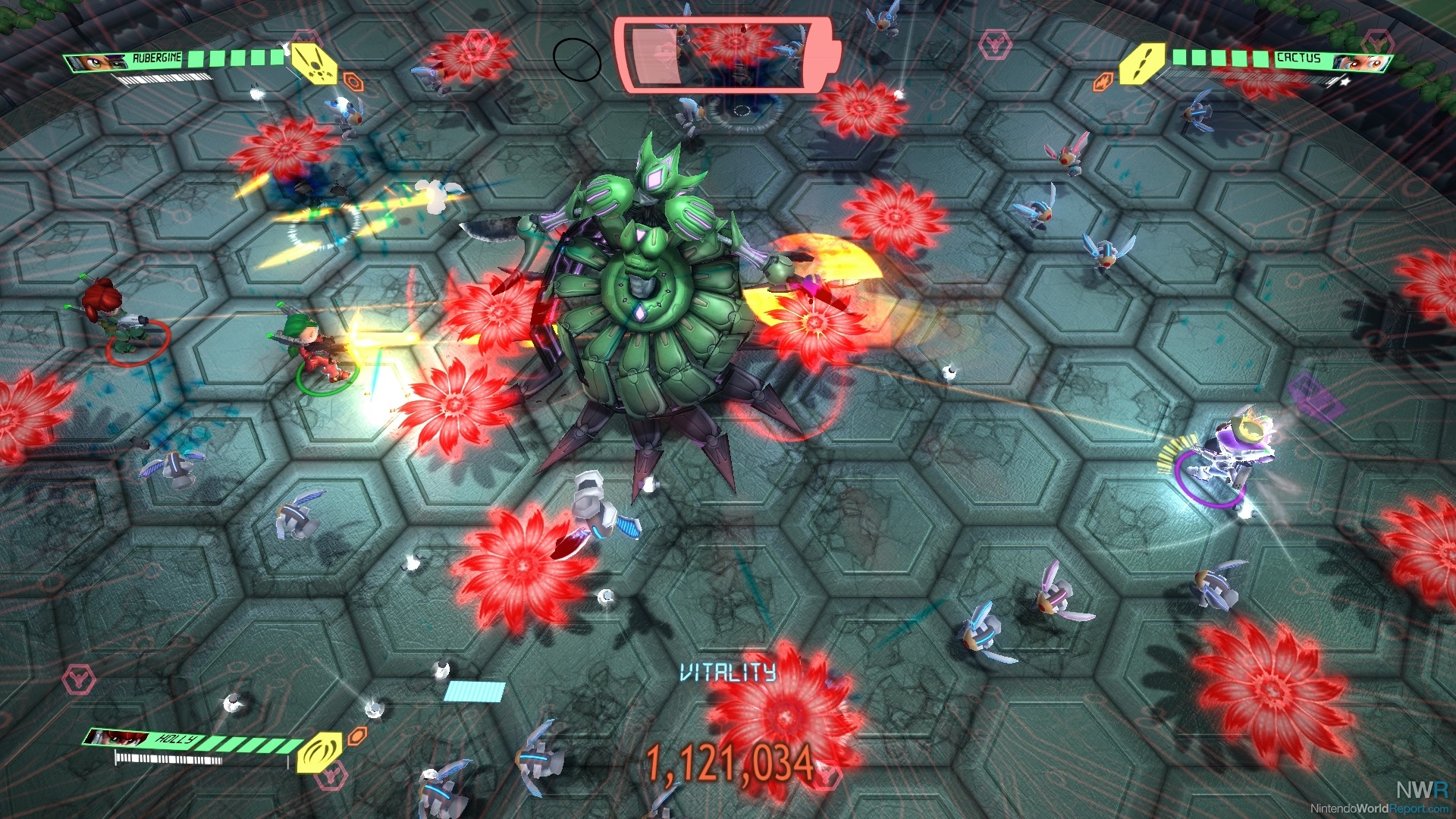 Assault Android Cactus+ doesn’t quite reinvent the twin-stick shooter wheel, but it has a few cool tricks and absolutely does the genre justice. Challenging bosses, fun gameplay, and solid controls make this a tough one to pass up. The remixed Campaign+ might not be enough of a reason for previous owners of the game to jump back in, but the plethora of online leaderboards should entice the high-score chasers among us. The local multiplayer and ease of play are perfect reasons to bust this one out for group gaming sessions, too. Assault Android Cactus+ is an easy recommendation for Switch owners looking for an exciting arcade experience.