Better we got this one remastered than, say, Infinite Undiscovery

The “Tales of” RPG series celebrates its 25th anniversary next year, and despite debuting on the Super Famicom, it’s often associated with the PlayStation family of systems. Surprisingly, two of its most beloved entries didn’t debut on the PlayStations of the day. 2003/4’s Tales of Symphonia launched on the GameCube, while 2008’s Tales of Vesperia debuted at the tail end of the JRPG push of the Xbox 360. Since it was on the Western-focused 360, Vesperia never really achieved the sales of later titles in its native Japan, but Bandai Namco saw fit to bring it back for what was intended to be a 10th anniversary release. And Nintendo fans should be especially pleased, as Vesperia is the best Tales game the Symphonia team has produced. 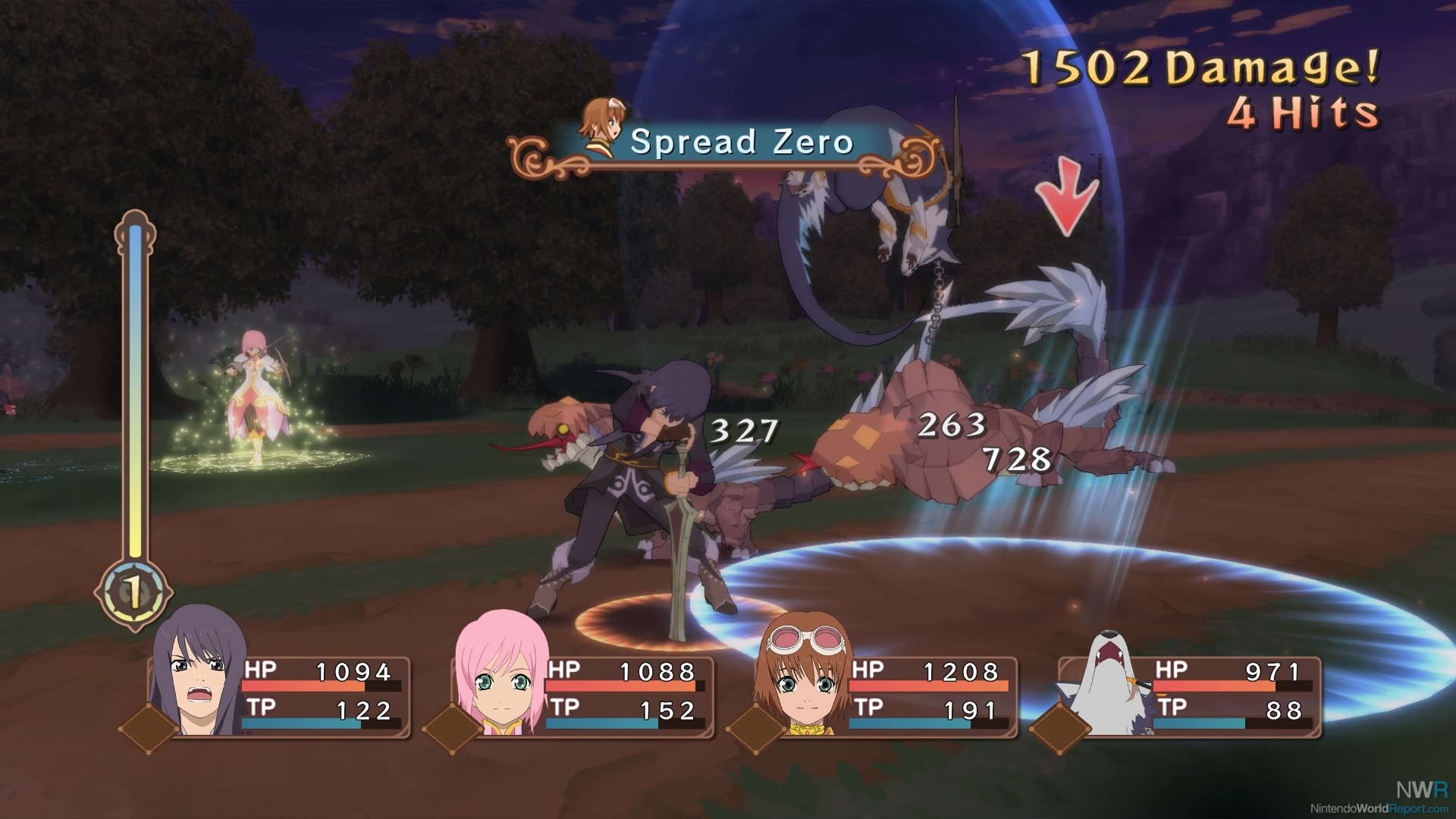 The Tales series combines traditional RPG exploration with a fully action-based combat system. The story plays out over three acts, with a host of optional quests to obtain better weapons and see more of the world. A standard world map connects the villages and other major areas of the game, though there were a few occasions where I spent a lot of time in a central area and got confused as to which way to go when I was done. The enemies are on-screen and an inexpensive item allows for the ability to prevent (or force) encounters on the map.

Crawling over the map is worth it for the story, which is the part of the game I had the most fun with. Unlike the last Tales entry on a Nintendo platform, the main characters Yuri and Estelle are actually likeable, and the rest of the party experience plenty of growth throughout the game. The optional skits that come up throughout let a lot of personality shine through, even if they are literally talking heads 99% of the time. There are some jokes beaten into the ground, mostly involving age or magic obsession, but Vesperia zigzags the tropes enough to keep things interesting and keep me pressing forward. They even manage to make me care about a character who starts as an annoying kid, but who ended up feeling like the little brother I never had. Character development even occurs with the scenes at the end of battle (even if it was an odd place to find out that Estelle wants a bouncier chest).

When getting into battle, it’s all action. There’s a fancy name for the battle system, “Linear Motion Battle,” which essentially means a focus on 2D combat but with the ability to free-run in a small area with ZL. One party member is under direct control while the others acting automatically, with a whole host of options for customizing the AI. About midway through the game’s first act, the ability to unlock the party leader from Yuri gives the opportunity to change your controlling role to that of a tank or healer instead of the melee-DPS role Yuri specializes in. (The item that unlocks this is called a “Special Flag”, which is an unexpected bit of Namco fanservice.) When big boss fights come up, it’s possible and recommended at higher levels to stop the AI from doing something that might heal a boss or waste skill points. For the most part, battles are over quickly, with 30-second battles shortening to 15 and even lower as the party gains experience. 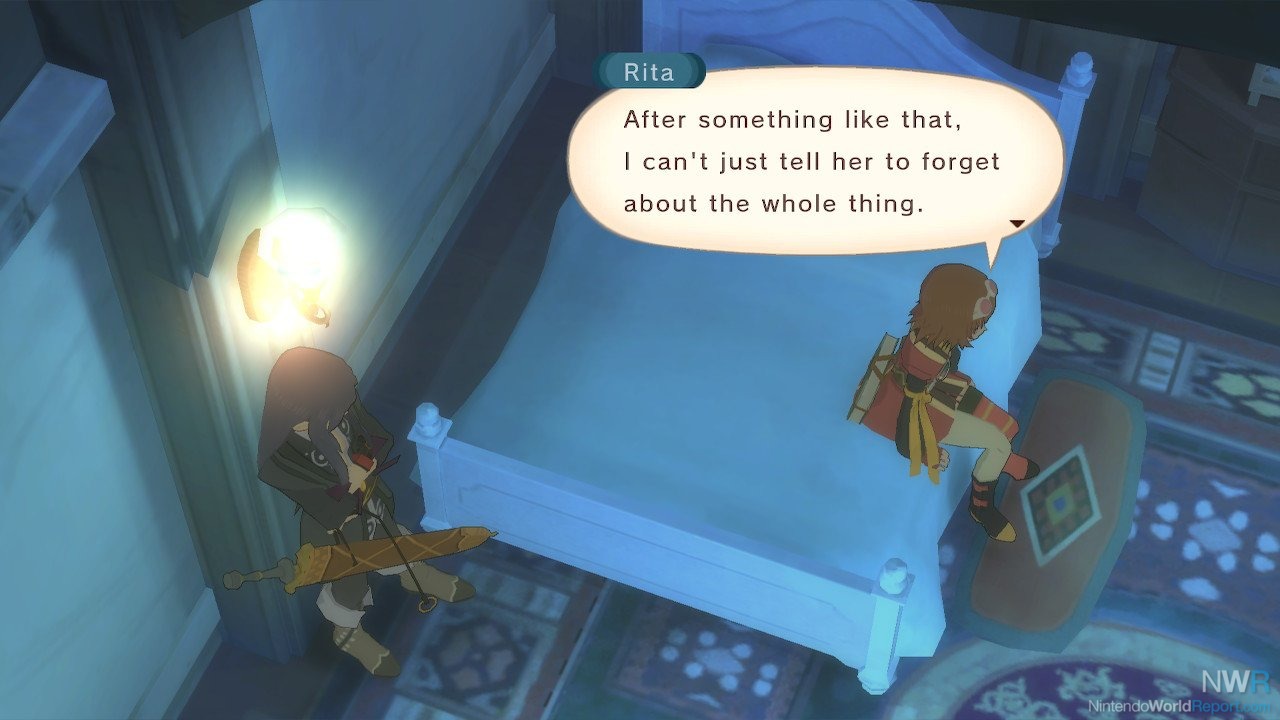 Since Vesperia was originally an Xbox 360 title, there wasn’t a lot of improvement necessary to the graphics, but the anime art style was definitely smoothed out for the Switch. There are clearly points in which “anime is happening,” but those are timed well to avoid overuse and save them for key plot moments. The music is fantastic, with special focus on the battle theme having a really hot opening because in a game where random battles average 10-15 seconds, there needs to be a great hook since it’ll get played a lot. The Switch version includes Japanese and English options for voices, and the voice work in the dub is fine even if different voice actors were commissioned for the Definitive Edition content that wasn’t localized before. An unfortunate side effect of the dub is that there are odd spots where words or entire phrases are voiced, but not written in the character text.

Players who are in it for the story should take note of some of the free content in the eShop: there is a bonus item pack available that can render most of the game incredibly easy. Previously, level boosters and currency (gald) were sold as DLC, but the Definitive Edition offers them as a free download. Having just shy of a million gald and an additional 40 levels midway through the game is a godsend for those who want to just experience the story.

For the last several years, one of my New Year’s resolutions was “beat a Tales game.” I had several of the PS3 entries, including the remake of Symphonia, but they all ran together, so I tended to float away from them after 5-7 hours. Tales of Vesperia is the first Tales game that I’ve put significant time into since the original PlayStation, and frankly the Switch has made it so I can’t finish super-long RPGs without some sort of portability. If you’re looking for a jumping-in point for the series, Vesperia is the way to go.

The copy of the game used for the review was purchased by Nintendo World Report.