A great style fused with boundless ideas and fun makes for an excellent experience.

As I blurred through the levels in FutureGrind, I kept waiting for the tricks to run out. Surely, at some point, the team at Milkbag Games will run out of inventive concepts for their jumping and flipping two-wheeled future bike. Dozens of levels in, the creativity, stylish feel, and surprisingly persistent story progression never faltered. FutureGrind is excellent from top to bottom, bringing forth a slew of novel sidescrolling trick-based gameplay ideas with aplomb.

Every level in FutureGrind follows a simple setup. You control a bike that always moves forward along a course and can jump and flip. Generally the bike has two wheels that can be manipulated to land on rails. Early on, it’s simple. Just survive with your basic ride that has two wheels of the same colors. Then, more bikes and ideas are introduced. You have one with two wheels, both of a different color, where you have to make sure the bike is in the right direction when it touches rails. Even battier is the one with an unusable wheel on one side that blows up when it touches a rail, while the other side has a wheel that changes colors after you ride a rail. 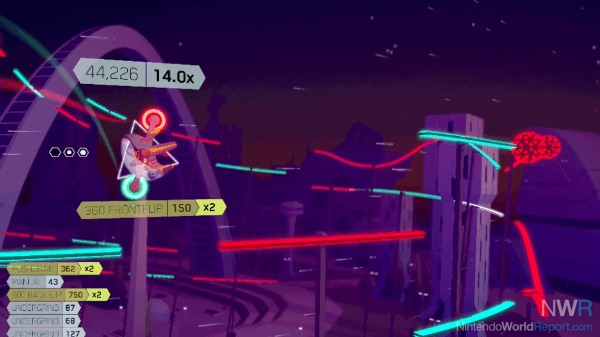 Outside of the scoring system, which is mostly optional your first time through the campaign, FutureGrind is essentially designed as a platformer. The levels all follow an auto-runner progression and the bite-sized nature and quick restarting remind me of games like Super Meat Boy. While extreme sports is definitely a qualifier for this, it’s much more than that.

Five new bikes are introduced steadily over the course of the satisfyingly long campaign and you bounce between using all of them consistently. After completing a run of a level, you open up alternative objectives that require you to do the run again but this time avoiding certain colors or performing a backflip or a grind of a certain length. They’re all good at getting you recontextualize how you approach a level, but they do repeat and at a certain point, I got tired of having every other level have an “avoid the white rails” challenge.

Underneath all this is a story about a potentially nefarious extreme sports sponsor of your player. While it’s mostly skippable, the more you dive into the game, the more secrets you uncover. It adds a nice sci-fi flavor to the world. 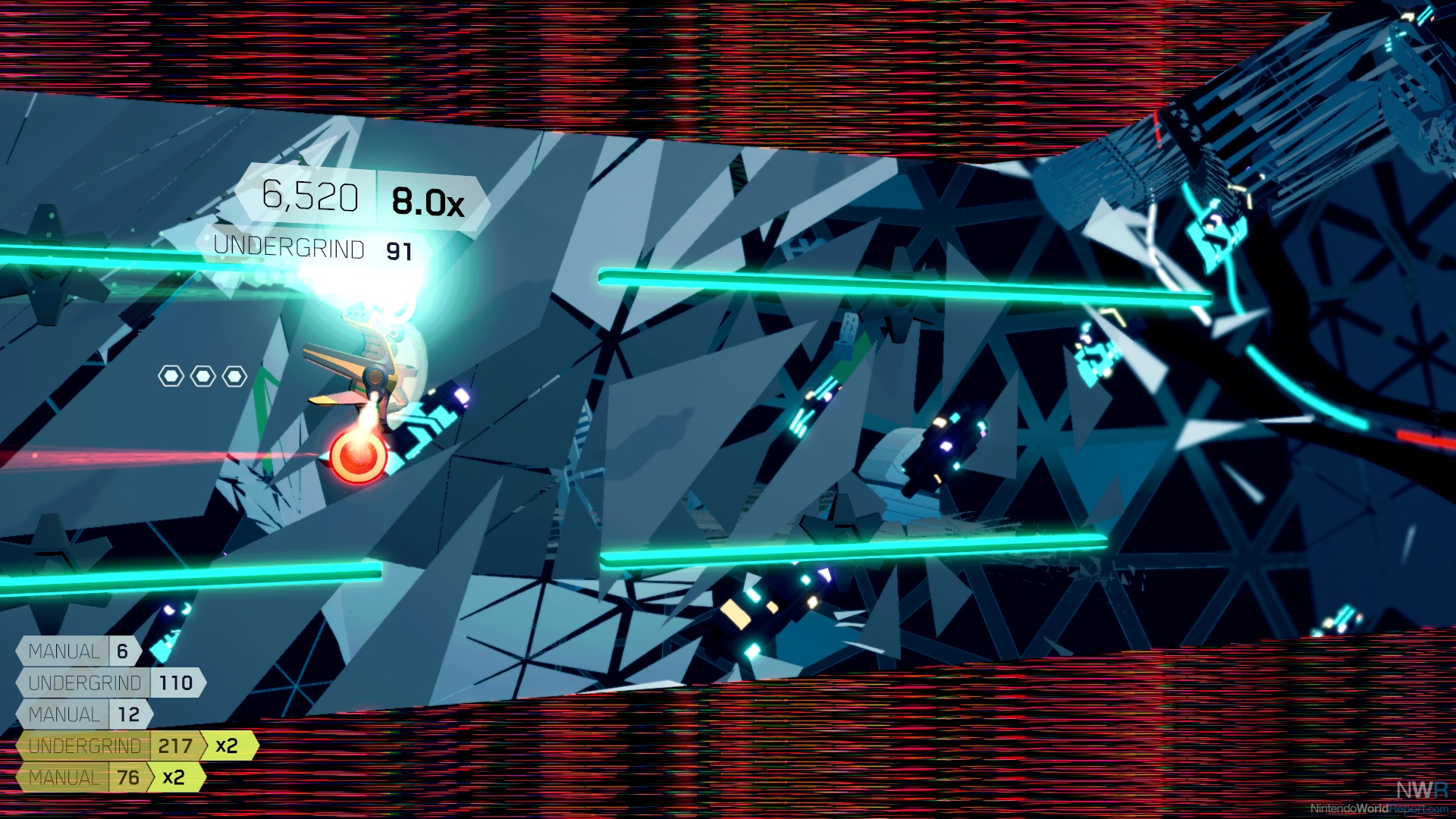 Once the more than 30 levels of the story are done, high scores are the last bastion of FutureGrind’s longevity. The trick system is straightforward but open-ended. Controls are simple - you can jump with a button and spin around with the analog stick. Flipping forwards and backwards earns you points, as does a variety of different grinds on rails, as you go over, under, and hang on them. Combos accumulate as long as you keep landing your wheels on the right color and if you make it through the story, going back to early levels and annihilating your early scores is satisfyingly easy.

But if FutureGrind is too hard for you, which it very well could be (I have experience with similarly styled games and the late stages got rather challenging for me), an assist mode is accessible. It serves the same purpose as the similar mode in Celeste, where the developers recommend you play as they intended, but are totally fine with those who just want to experience the game. I adore this logic and I appreciate that this mode is here even if I personally didn’t use it outside of testing for the review.

FutureGrind is a brilliantly simple 2D application of extreme sports game concepts that offers a lot of variety packed in a relatively lean package. Surprise was at every corner of this game and the engaging trick system and enjoyable campaign made for an awesome time.