Travis’ returns is worth the wait even if it's not quite a true sequel.

By the time Travis Strikes Again comes out on Nintendo Switch, Travis Touchdown’s previous starring role, No More Heroes 2, will be nearly nine years old. It’s been a very long time since the cult classic series from Suda 51 and Grasshopper Manufacture last appeared. The series’ awaited return is no No More Heroes 3, though. Travis Strikes Again is a lot more of a reintroduction of the character and the world in a scaled-back setting, focusing a lot more on side-scrolling or isometric beat-em-up gameplay with bizarre setups and stylistic detours.

The juvenile and meta sense of humor rules the day, as is No More Heroes tradition. Travis is still an assassin as bloodthirsty as ever and the game-within-a-game concept is more charming than it has any right being. The premise kicks off with Travis hiding out in a secluded trailer, avoiding his past life climbing up the ranks of the United Assassins Association. Badman, the father of one of his past victims, attacks him and the pair wind up working together to accrue the Death Balls—six video games from a dark, nefarious never-released console dubbed the Death Drive Mark II. It’s said that when you get all the Death Balls, your greatest desire will be realized, or something to that effect. So begins Travis and Badman’s quest to find these games, play through them, and win the day. 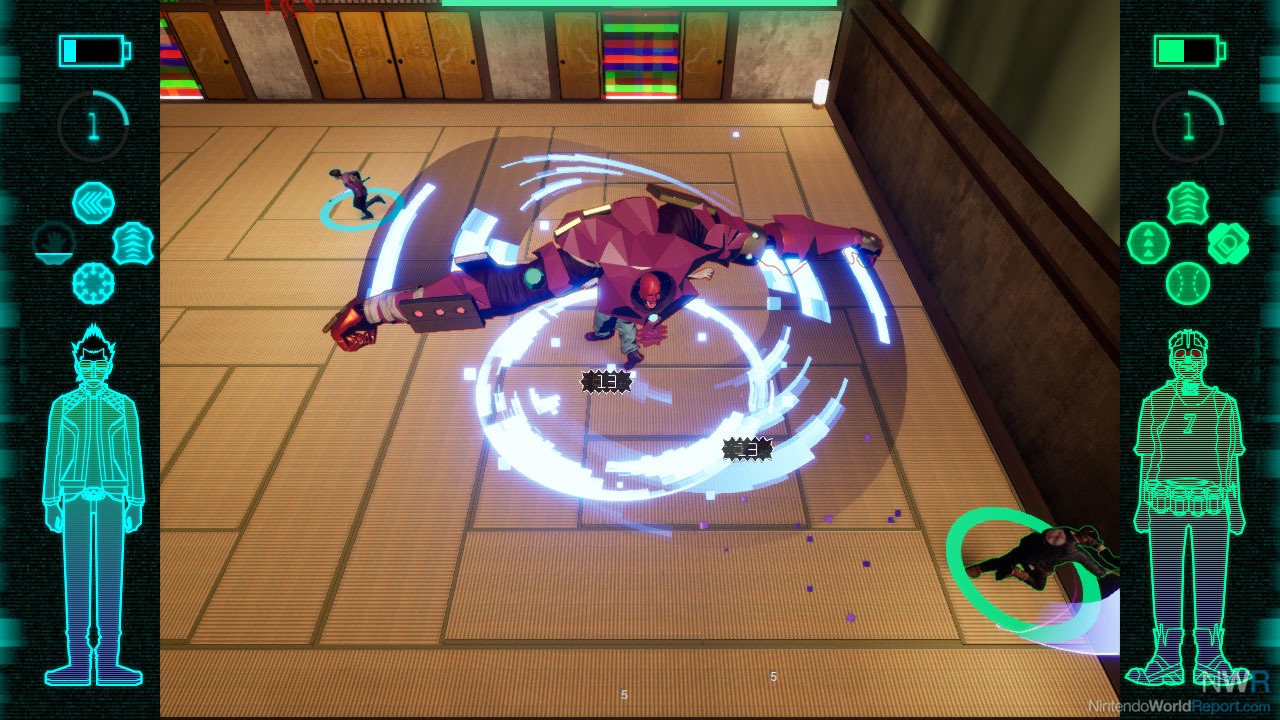 The writing deftly toes the line of being too ridiculous. Lots of jokes are made about the structure of video games, poking fun at tropes like minibosses, palette swaps, and more. A recurring gag also laments the budget restrictions of Travis Strikes Again, which makes some of the corners cut here endearing as opposed to disappointing. A lot of story is handled in a primitive retro visual novel style, dubbed Travis Strikes Back, that can get a little long in the tooth but features some very funny moments. If all this meta humor was the sole thrust, I think the game would fall apart, but everything is peppered by Suda’s weird style. An early level theme of not trusting chain restaurants still rattles around my brain as it’s amusing and also seemingly pointless. Travis Strikes Again does a very good job of reminding me of the bizarre auteur style of Suda’s work; I haven’t played a game that felt like this since No More Heroes 2.

Each of the games-within-a-game play out similarly, with some light universe building setting up the fictional story of the development, usually with some solid jokes paying homage to real gaming history. Each of the six games have different hooks, whether it’s the murder case setup of Life Is Destroy, the mansion exploration of Coffee and Doughnuts, or the racing in Golden Dragon GP. However, the most common gameplay is primarily uniform between all: they are all beat-’em-ups that feel like a slimmed down rendition of the previous No More Heroes entries. Combat is basic, with light and heavy attacks and a dodge, but enough nuance is present to keep it engaging. Skills and special abilities add variety, as you can equip up to four skills that vary from health regeneration to powerful one-shot attacks. On its own, this gameplay wouldn’t hold up over the course of the adventure, but combined with each game’s quirks, the strong writing, and good sense of humor, it all works well, even more so if you have an engaged friend to play the game with in co-op. 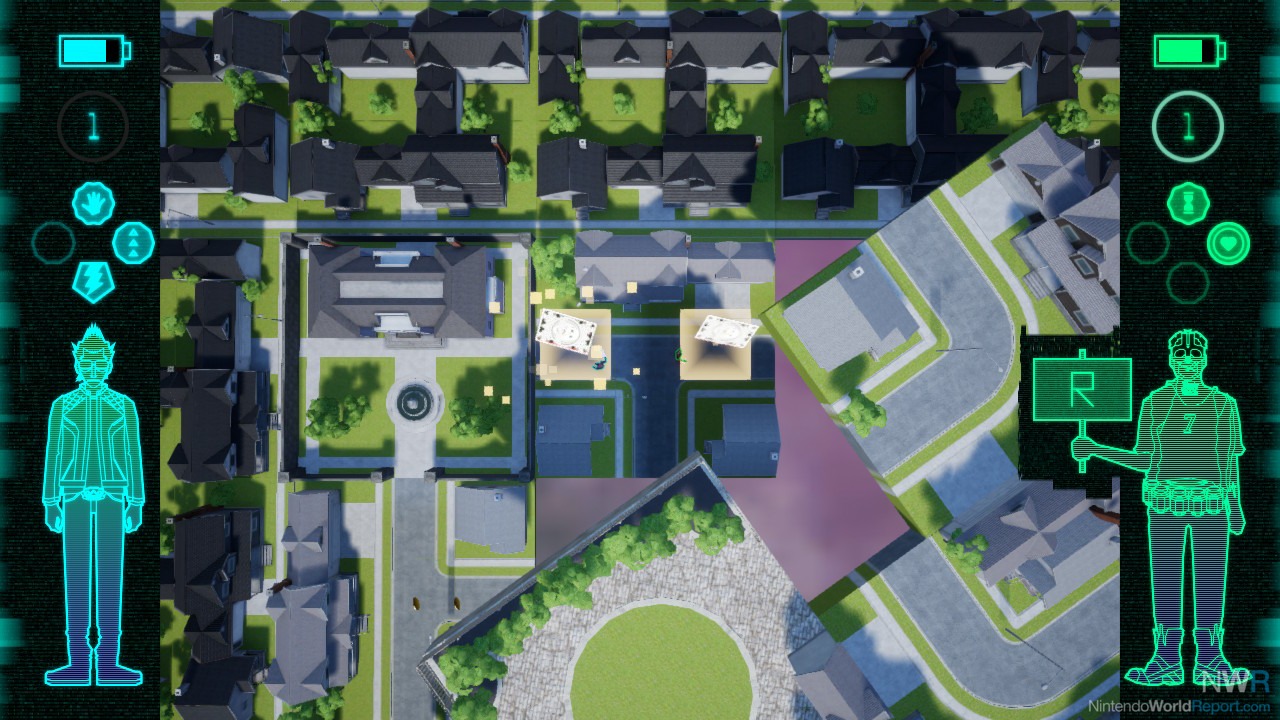 Where it falters is in some of the extraneous twists. It’s thankfully not that long, but the zoomed-out top-down neighborhood exploration segments in the second game Life Is Destroy, well outstay their welcome, especially when a time pressure is added to the last few areas, and it’s often hard to tell what areas can be walked through or not. The isometric camera is occasionally an issue, restricting your view of the action. Also, the platforming never works in any form across the games, but thankfully it’s never that much of a focus.

What struck me throughout the entirety of Travis Strikes Again is that while elements are shallower, the balance between them all is excellent. Each initial runthrough of a game is rarely much longer than an hour, though secrets and unlockables can bring you back for replays. Aspects like the racing mini-game are novel and have the potential to get old fast, but the mini-games never linger that long. The beat-’em-up gameplay truthfully isn’t all that deep, but when it starts to get stale, a puzzle or story beat is usually there to break it up.

Adding more to the whole being greater than the sum of its parts are the various indie game references in the shirts Travis and Badman can wear. My Travis alternated between wearing a SteamWorld Dig 2, Hyper Light Drifter, and The Messenger shirt while I dug the bright blues of Badman in a Bit.Trip Runner shirt. Most of these are window dressing, but the story and gameplay does pay homage to some indies as well as other games from Suda’s past. Truthfully though, I had to look up The Silver Case references to confirm them.

If all goes well, Travis Strikes Again will lead to No More Heroes 3 and Travis Touchdown’s bigger and bolder return to video games. Thankfully, even if it’s a little weird and limited in some respects, Travis Strikes Again is a fun game that makes me excited for the future of the series. Spending time in the punk rock hellscape of No More Heroes isn’t something I thought I’d get to do again. That trip might be through the lens of a bunch of fake video games, but all that does is add a welcome twist to Travis’ escapades and add another quirk to Suda’s legacy.