While JRPG inspirations drip from YIIK, the end result is wholly its own American-made delight.

YIIK: A Post-Modern RPG is an indie game that has long been in development and whenever I’ve seen it before its launch, I’ve always been taken by its style. Made by New Jersey-based ACKK Studios, the otherworldly setup follows hipster-y young adults at the cusp of the new millennium searching for lost kids in a world colored by subtle references to the bizarre Weird New Jersey subculture of suburban legends. The hook drew me in, especially with its heavy inspirations from my home state’s quirks during an era that I remember well in addition to the clear JRPG influences from EarthBound, Shin Megami Tensei, and even some more offbeat stuff like Shadow Hearts. YIIK occasionally stumbles throughout its own promise, but it’s one of the most ambitious indie RPGs I’ve ever played and thanks to an enthralling style and good mixture of story, combat, and exploration, it made for an enjoyable journey with a few tolerable speed bumps.

An array of EarthBound-related reference points could be used to summarize YIIK. Hipster EarthBound is what I first dubbed it to friends initially, but the deeper I got, I settled on Nihilistic EarthBound. Compared to the more hopeful, upbeat tone of Nintendo’s classic slice-of-life RPG, YIIK is thoroughly depressing. The world is rundown and every non-playable character seems to have a scowl. In a way, it’s a quintessential depiction of New Jersey that comes from a place of experiencing how perpetually angry everyone in the state is. Whereas EarthBound draws from an idealistic view of American culture, YIIK pulls from the cynical, realer side of it. Your party of teens and twenty-somethings all have baggage weighing them down, usually centered around how people close to them disappeared and no one around them cares about it. In the world of YIIK, everyone is adrift, clinging to a hope that answers are somewhere. It’s all weirdly poignant given the current state of America. And then the “post-modern” subtitle becomes more dominant and the game takes some out-there left turns that while often overwrought, help color in this dreary world with mystery and charm. 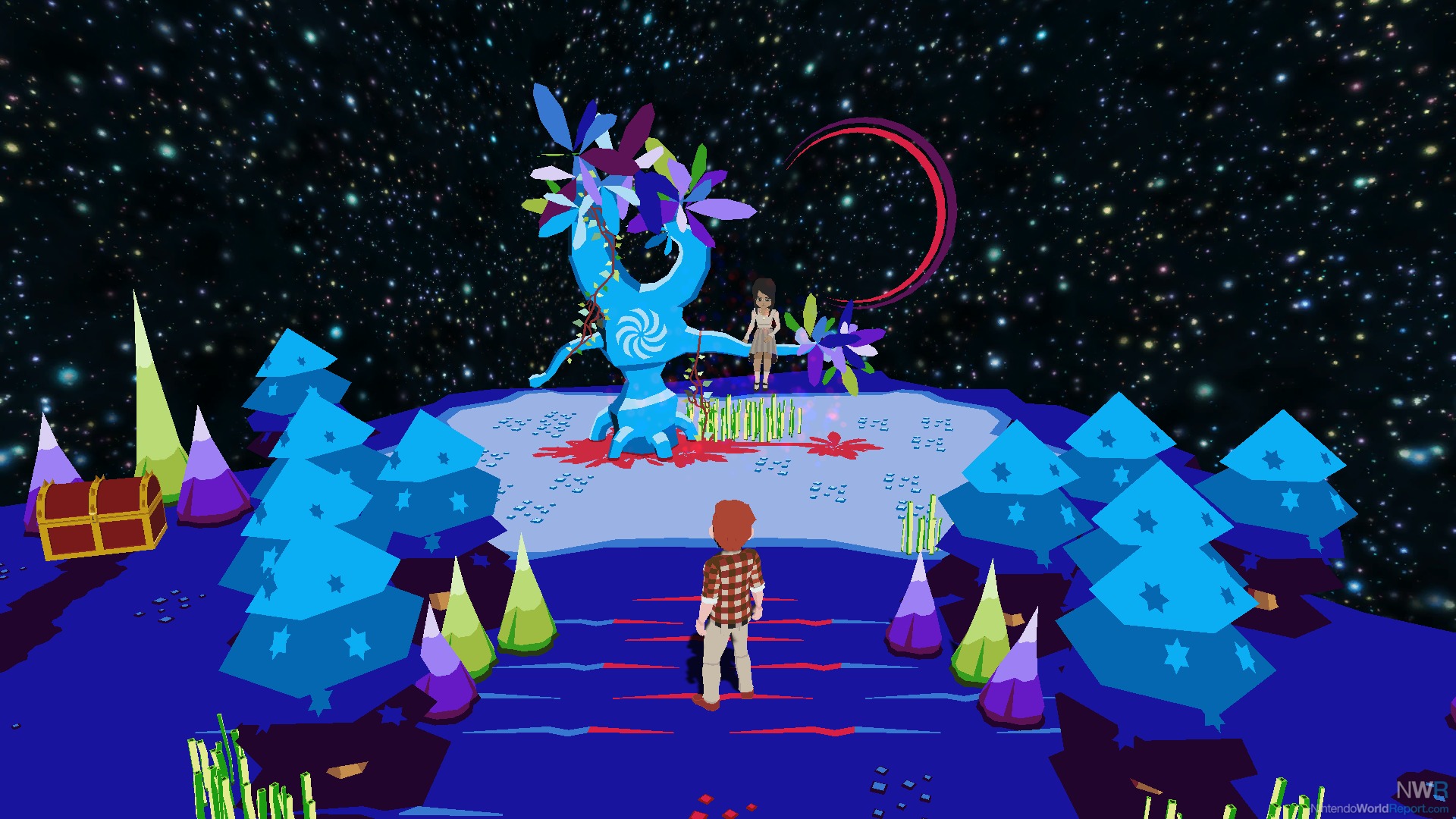 The story is very much in your face, making up a majority of the game. The hero is Alex, a plaid shirt-adorned college grad hipster who comes home and stumbles into a building where he meets the mysterious woman Sammy. After witnessing her being taken away by creatures in an elevator, he is shaken and determined to figure out what is going on. That leads him on a trippy quest where he ends up engaging with an online message board about weird occurences in the area, meeting up with a cast of seeming suburban shiftless layabouts. The dialog is often heavy-handed, overloaded by baffling exposition and weird digressions. Early on, it gets weighed down by too many winking gags, most notably overburdened references to the developer’s past games and several pop culture joke detours that outstay their welcome. Some of these gags do work out, like the side quests being operated via threads on a fake late-‘90s message board. Even if the story can sometimes be a little much, the core thread and mystery is interesting when you get past the referential and expository fluff. A whole lot more gets revealed over the course of the journey and the back half starts to coalesce into something a lot better, weirder, and interesting. YIIK finds its own engaging path as it concludes. Going into much more detail would lessen the punch of the final hours, but the fact I satisfyingly watched the credits roll at 1 a.m. after planning to stop hours before speaks volumes.

The combat and exploration are other featured pillars next to the narrative. The turn-based combat is heavily timing-based with a relatively steep learning curve. However, once you grasp the specific timing of each character’s attacks, specials, and defense, the battles get more thrilling. Most characters have relatively simple rhythm mini-games to play, whether it’s just holding a button and releasing with proper timing or a few prompted button presses. Main character Alex’s basic attack is a finicky vinyl-inspired one where you have to mash a button during specific intervals to get a large combo. Considering it’s the attack you will do most, the fact that it’s consistently difficult makes it frustrating, especially early on. You do earn the ability to slow down time to help out with your timing, but it can be maddening. Even still, the difference between flawlessly nailing attacks and messing them up is slim. Unless you completely flub the mini-game, the difference in damage is usually slight. It just feels off when you nail a 25-hit combo with Alex’s vinyl attack and it barely does more damage than a pedestrian 8-hit combo. I still enjoy the combat system despite these issues, though, and while the battles generally run long, they’re paced well throughout save a few stretches where combat becomes too much of the focus. 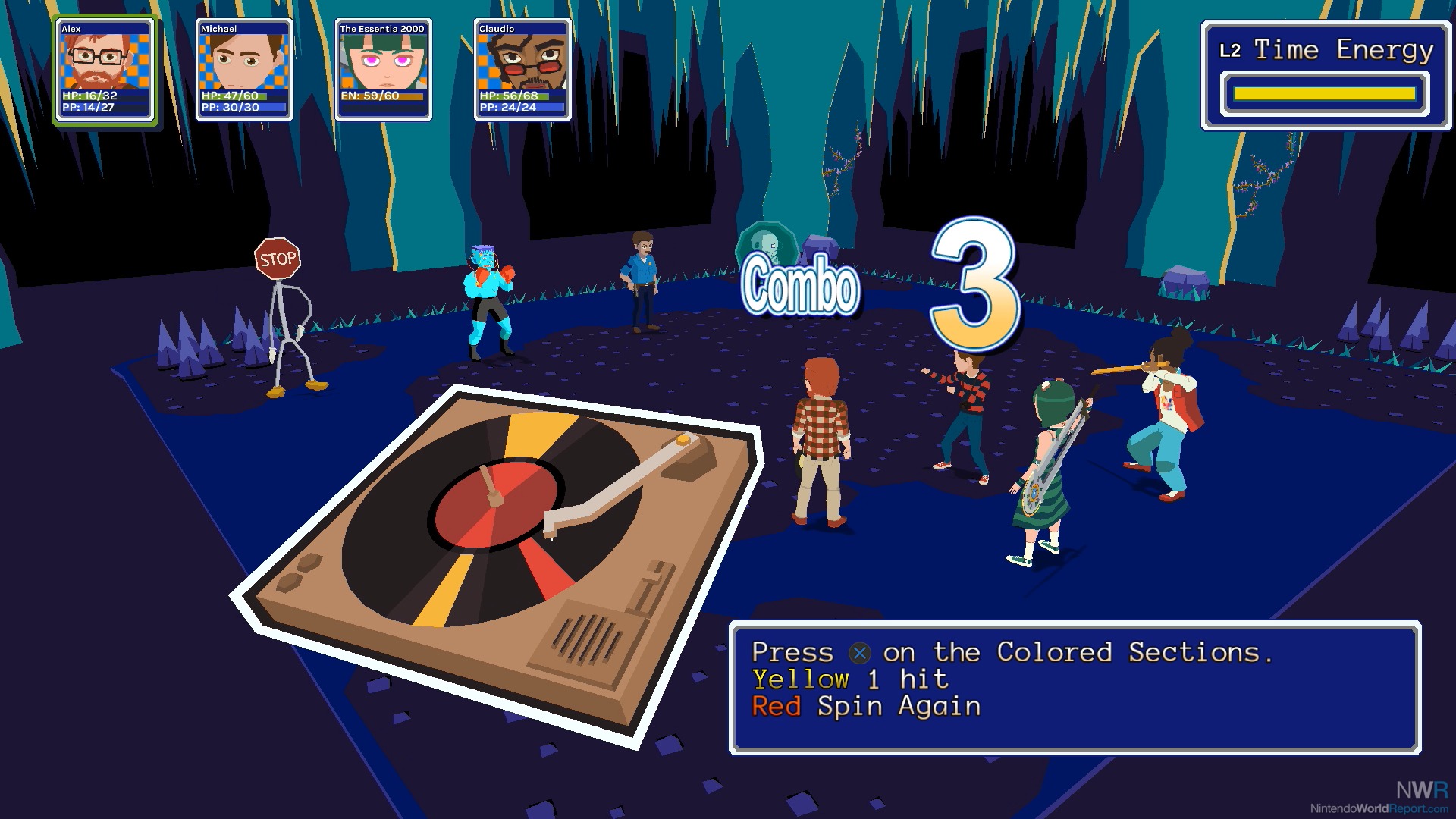 Dungeons pop up regularly and the story usually takes a little bit of a backseat during these portions as light environmental puzzles, battles, and other obstacles appear. Various abilities ranging from a cat that can be thrown like a boomerang to hit switches or collect items to a hair-whip move that cuts down trees can be used to work your way through these areas to find a way forward or unlock secrets. The early puzzles are simple, but later ones start to get more ingenious and enjoyable, helping to add variety to the gameplay.

YIIK handles levelling up in a weird way. The first hour or so, you earn experience points but never level up. It isn’t until a certain point where you can enter the Mind Dungeon at save points. Alex can be leveled up by walking through a dungeon where you talk to a bird and pick bonuses for your stats with every level. To level up other party members, you have to “encourage them” in the Mind Dungeon, which then levels them up automatically. The system is confusing at first, but is totally fine once you can wrap your mind around it. 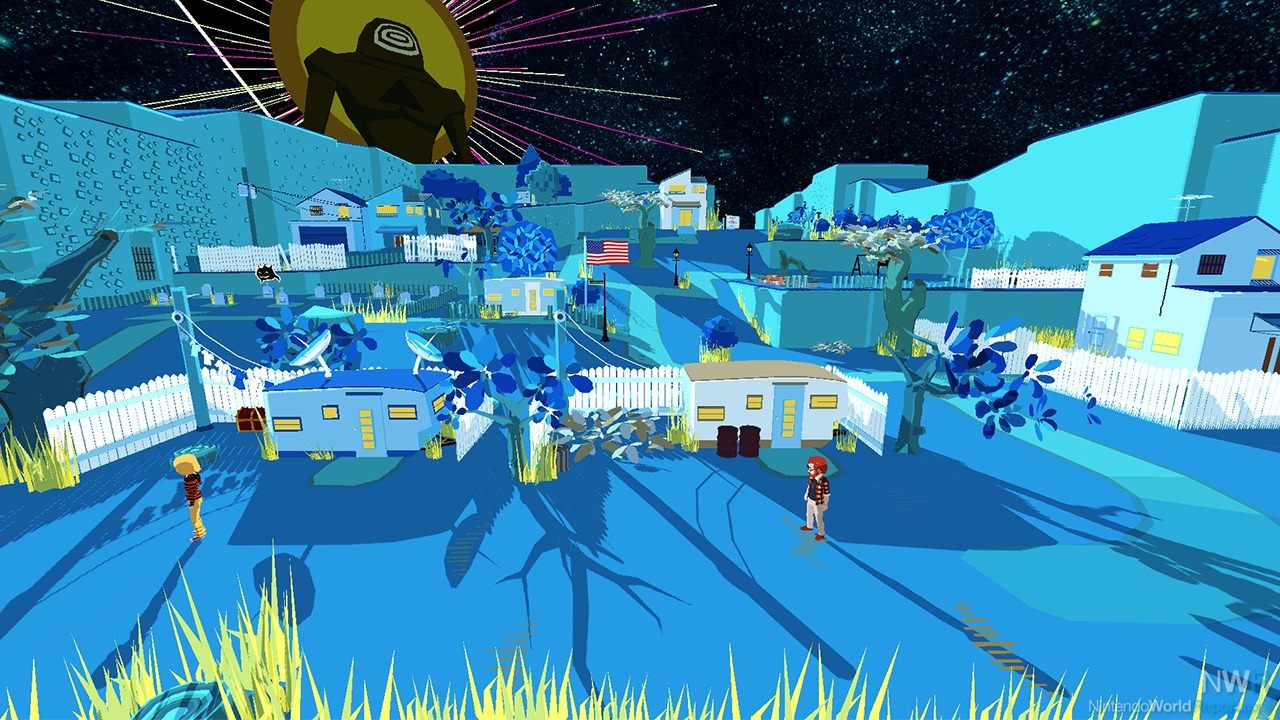 A major drawback to the Mind Dungeon is that it requires multiple loading screens to access. YIIK has a major problem with load times, as entering new areas and battles all consistently take 5 to 10 seconds at a minimum. If that happened rarely, it wouldn’t be that bad, but loading happens frequently and dramatically slows down everything. Aside from the loading, the game is fine technically. The art style looks great in motion, even more so when complemented by the catchy and ethereal soundtrack, which has several brilliant and endearing tracks (including music from Toby Fox of Undertale fame and Hiroki Kikuta of Secret of Mana fame). The overworld themes and battle music all help accent the eerie style. The vibe is very strong with YIIK.

I like a whole lot about YIIK - mostly its distinctive style and noble attempts at timing-based RPG combat. The experience might be muddied by a few rougher edges, like the consistently grating load times and some of the discomforting battle quirks, but more often than not, I came away impressed by how well everything came together in spite of some issues. The ambition and scope of this lengthy indie epic is impressive, taking big swings and, despite the numerous inspirations, carving its own distinct path. If you want your Japanese-style RPG to do to New Jersey what Shin Megami Tensei does to Tokyo, then YIIK is the closest you’ll ever get.