As riveting as actual government work and just as slow.

Never consider Venture Towns. I don’t care how extreme the sale or depth of your love for city building games; Venture Towns is not worth your time. It is mechanically unsound. It is glacially slow. Its economics are inscrutable, and its abuse of English isn’t much better. But, above all else, it is aggressively boring.

Venture Towns should be a perfectly functional city building game. You place roads and buildings, attract new residents, and try your best to expand the city while keeping in the black. However, dozens of decisions erode what fun should be there. 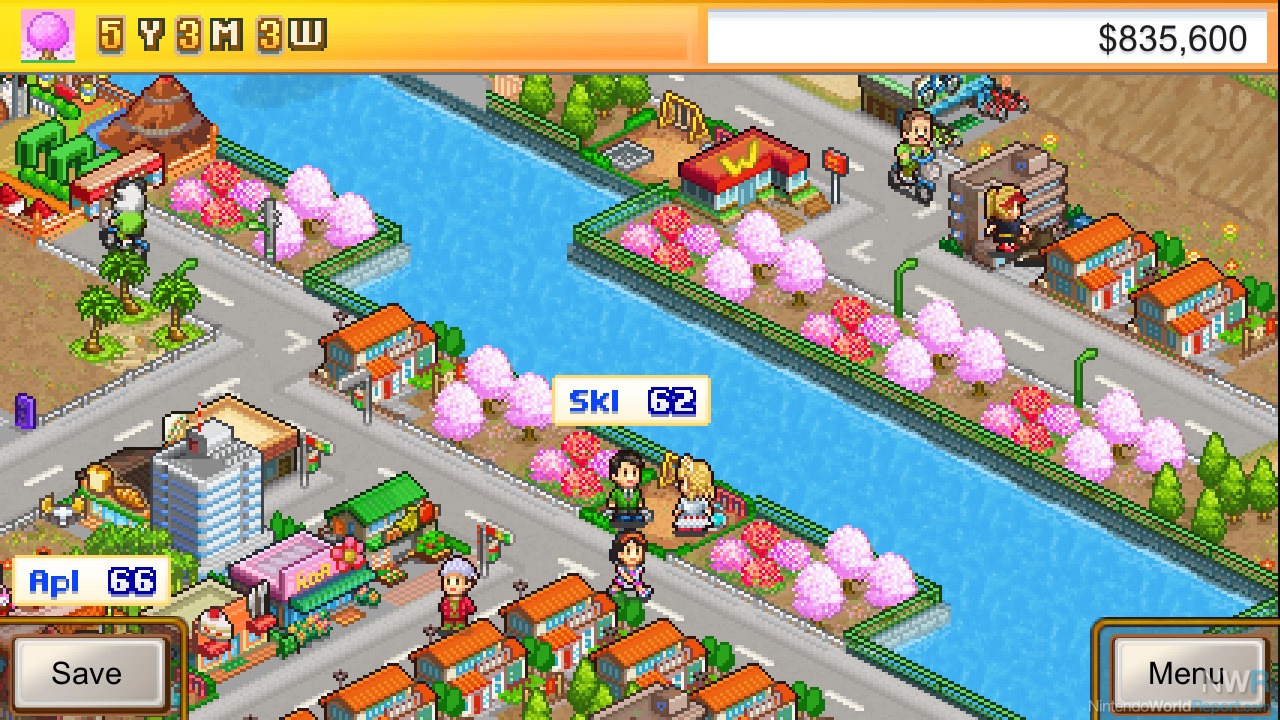 I don't doubt your town COULD look like this.

In what is 2018’s most unintentionally-dystopian game of the year, the “development company” building the town explicitly assigns jobs to every resident. Assigning work is only possible if a character has the right stats for the job. Even having the stats doesn’t ensure success; in a feature that seemingly exists only to frustrate the player, an assignment can fail - leaving the citizen in their previous occupation. As if that weren’t enough, the game makes matters worse by charging money for every attempt.

When your citizens “master” jobs, you get access to new research opportunities. These are paid for with both money and Research Points that are accrued when citizens use the towns various businesses. The mechanic doesn’t add much to the game, except waiting for meters to fill each time your town’s residents use the casino. Often research does nothing more than gate new construction options. This superficially slows progress and is a continuous drain on your financial resources. 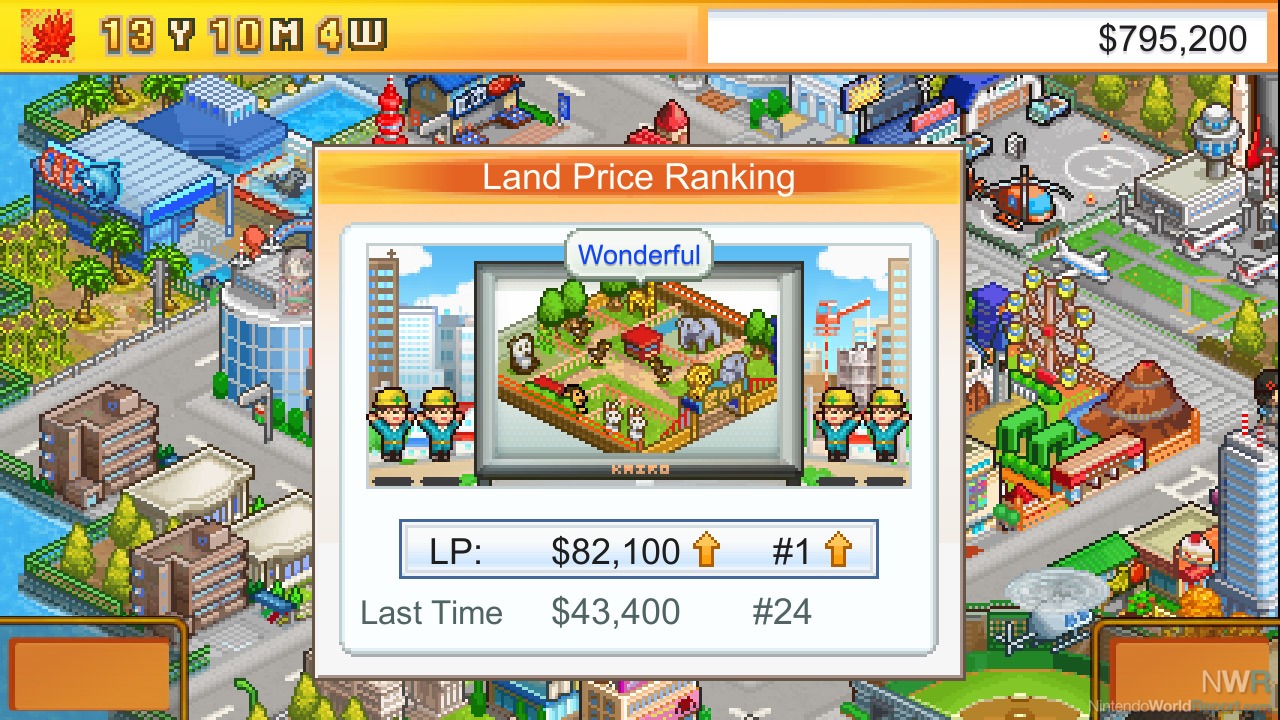 Without speed control, year 13 would require hours of investment.

Expanding the town involves a cycle of assigning citizens, research, construction, and discovering new jobs. Businesses built nearby office buildings unlock new jobs, but it’s not clear how close constitutes “nearby.” It is clearly further than the “next to” standard used when construction impacts adjacent property values. Again, it isn’t clear why I need an office complex near the pet store for the world to have conceived of the job pet groomer, but here we are. Not knowing how close it needs to be results in over-building the offices - and then losing money maintaining them.

Even having a city, full of functioning business and impressed labor, doesn’t ensure economic stability. Bonuses are awarded for combining certain businesses into groups (for example Chinese restaurant sandwiched between a bar and a sushi joint) but I’ve seen the exact same town result in both economic prosperity and grinding debt. Even after hours with Venture Towns, I can’t figure out the economy. I’m somewhat more productive in towns I start now, but I couldn’t formulate that into actionable advice. The lack of any useful “statics,” a feature of every city builder ever created, renders the entire economy a black box.

The worst, most confounding decision, is making a city building game that would lose a race to drifting tectonic plates. The boredom is only made worse by everything taking forever. Most city building games provide speed options, and Venture Towns is no different. However, it insultingly requires you “clear” a scenario before it lets you use them. I cannot see anyone ever replaying a scenario in this tedious game, so I’ll consider the speed option “theoretical.” 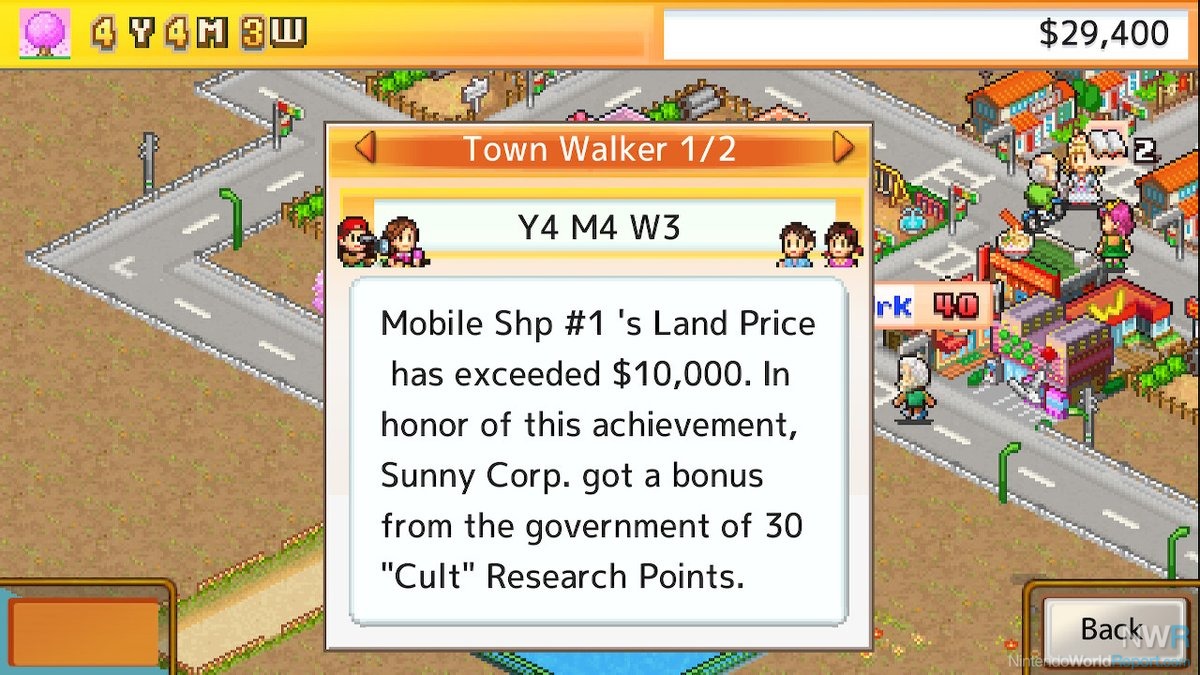 This game is not dressed for a console release. The pixelated art style is fine for a 2D city builder, but looks atrocious when zoomed in and blurry when zoomed out. The interface is a mess of pointers that belie a sloppy mobile conversion; the game constantly uses the word “tap” to describe interaction both docked and in handheld mode. Menus hide basic functionality, making interacting with them unpleasant. The use of English is hilariously marred by a lack of understanding. Nearly every line starts and ends with a broken word, and the game routinely shortens words in ways that are as inscrutable as they are unnecessary (“Cult” for “Culture” “Rest” for “Restaurant”). Even the audio is inarguably subpar. The only song, a 15 second musical jingle played entirely on bicycle horns, can only be improved by turning it off leaving behind an uncomfortable silence.

Venture Towns doesn’t feature any bugs, it does what it sets out to do, and ultimately you could build a city in this game. But the lack of options, the weird way it guides your development, the strange economics, and the unimaginably slow gameplay mean you wouldn’t want to.

At first glance the screenshot looked appealing, but geez this sounds terrible, bicycle horn music and all.

As riveting as actual government work and just as slow.

I was actually kind of excited for this game. I love city builders.