Before we really into it, I need to say something: Sundered: Eldritch Edition really has very little to do with H.P. Lovecraft or even August Derleth, who considered himself Lovecraft’s heir apparent. Sundered is a 2D action platformer with Metroid-like elements and an interesting death cycle. And it’s a very good game, super addictive, and beautifully animated. I just don’t want you going in thinking this is yet another video game adaptation of The Shadow Over Innsmouth, because aside from some aesthetic choices and naming conventions, there's not a lot of Lovecraft here.

You play as Eshe, a lone warrior who uncovers a subterranean world. It is a huge world and features the hostile technology and threatening automatons of a group called Valkyries, a dark, foreboding cavern filled with things one might call “Lovecraft-adjacent,” and the remnants of a once-great, now ruined, kingdom that the Valkyries attempted to overtake. Eshe finds an unexpected friend in an ambiguously demonic entity who occasionally narrates the history of the conflict and encourages Eshe to give in to his eldritch powers so that she may venture further into the labyrinth.

The game’s loop works like this: You run around this enormous environment but are kept in check by locked doors or rune symbols that you can’t activate yet. Your primary goal is cartography, but you’ll also be destroying a lot of test tubes and pottery while defending yourself from hordes of monsters. They appear en masse and more or less at random, forcing you into a prolonged conflict that either has a timer or ends when you find your way through a particular section of the map. Eshe has a few abilities that help her manage the chaos: a Halo-like shield that eventually breaks (but recharges quickly), a short-range but very deadly sword, and a “Finisher,” which is an awkward super attack that doesn’t have the range or longevity that I’d have liked. Killing monsters charges the Finisher so that you can use it multiple times during any one mob fight. If you’re in a mob fight that is wearing you down and isn’t ending, that’s usually a sign that you should explore somewhere else. 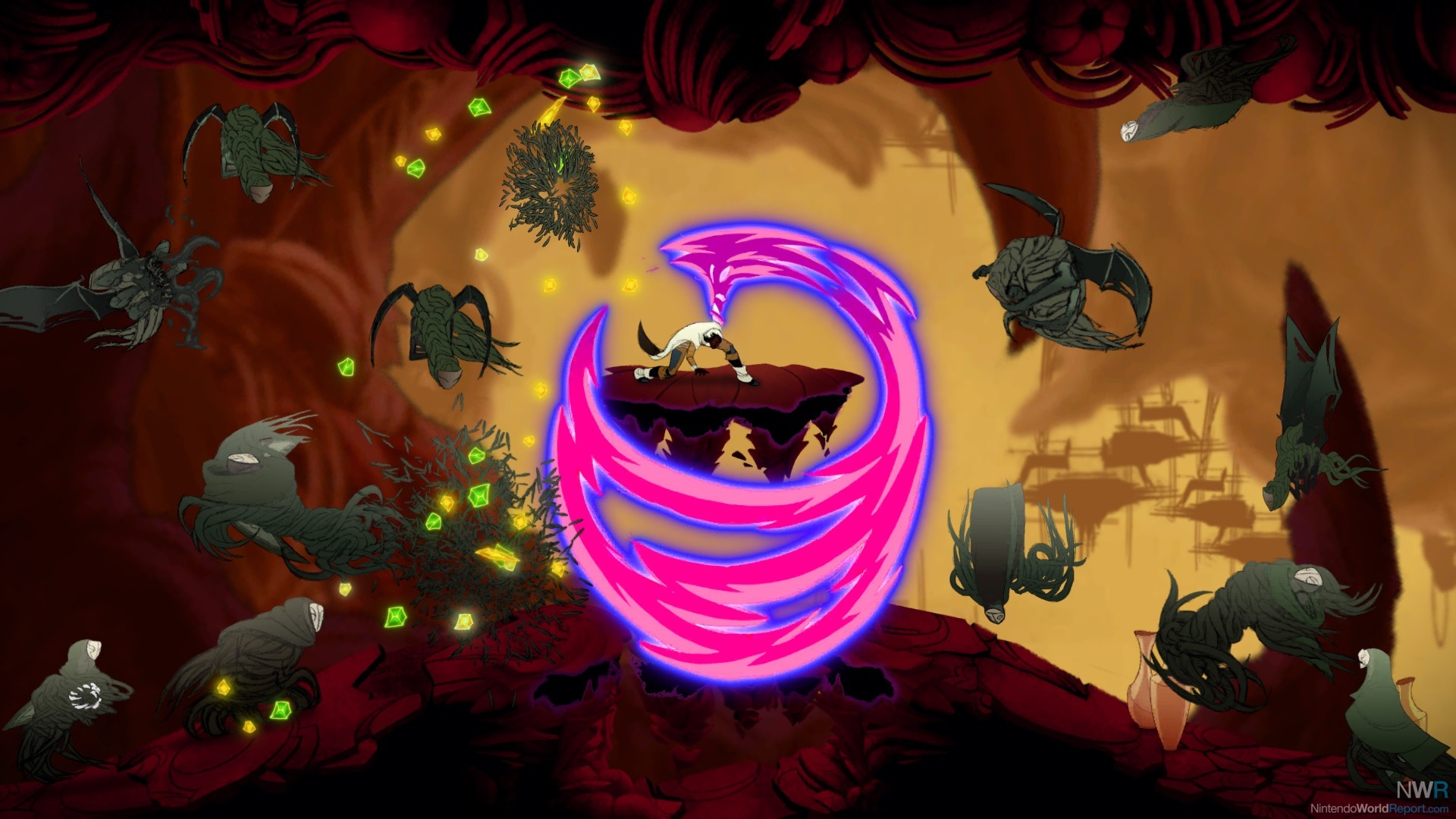 Eventually Eshe will be killed, either by monster mobs, a boss, or environmental hazards. She respawns at the map’s starting point and can use acquired coins to upgrade her shield strength, melee damage, defense, health pack capacity, etc. You can also equip Perks if you’ve found them. Once you buy the ability to equip multiple Perks (up to three total), another section of the skill tree will open up. When you run out of money, it’s back to the labyrinth. Repeat forever.

There are wrinkles, of course. Eshe constantly finds shortcuts between the world’s various regions, cutting down on re-traversal. When Eshe fights a mini-boss or regional boss, the reward (an Elder Shard) can be taken back to a certain area to give Eshe a new movement ability, like a double-jump or a gliding form. Thankfully, she can wall-jump out of the box. But you’ll spend most of your time on cartography and gold farming. You can actually return to the skill tree at any time in the pause menu but it’s like being killed—you’ll restart at the beginning of the maze.

Sundered is a gorgeous game, with fantastic hand-drawn characters and some amazing backgrounds. You’ll spend a lot of time in interconnected subterranean areas, so when you find a giant room, the developers really make it special. The game does a great job of conveying the lost civilization that was interrupted by the Valkyries. The boss battles are amazing, challenging, and really show off the creature design. Eshe’s demonic buddy speaks in his own language (there are subtitles) that’s always fun to listen to. The music is kind of a weak point, though—it’s usually subdued, very much in the background. I never had an issue with the control scheme. 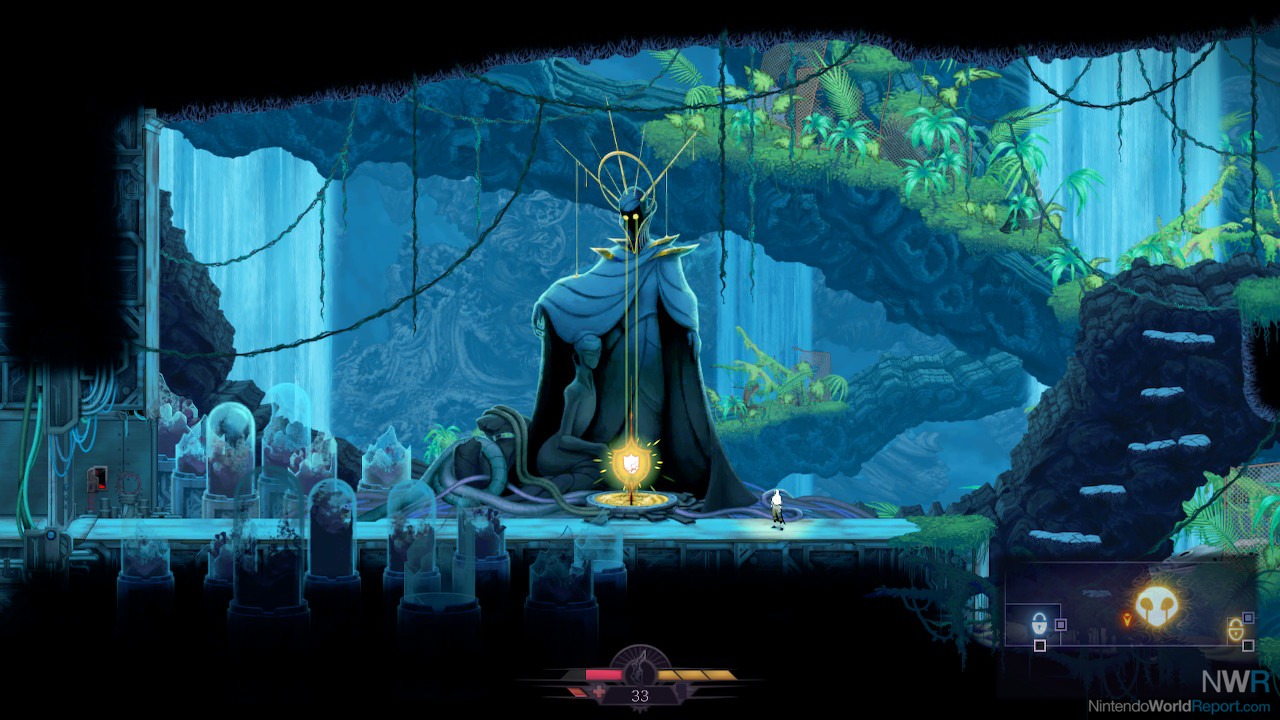 I don’t have too many problems with the game, but here are a few: every time you upgrade a skill, the next upgrade costs a little more money. Combine this with the fact that each skill must be upgraded three times to open the next branch and skills become very expensive very quickly. When it costs 1,500 gold just to upgrade your shield strength, you start to worry about how much the next upgrade will run. Each distinct area has its own enemies, but there aren’t that many distinct enemy types. Tougher enemies are simply palette swaps of existing enemies. The overall map’s layout is misleading: distinct rooms typically don’t have actual doors, and a single room in the overall map self-divides into several much smaller rooms once you get in there, so what you think will be a straightforward journey turns out to be anything but. I literally just realized this is because, while the major landmarks never change, the path to them randomizes each time you die. Finally, and this is a big one: the load times after death (or between major areas) are abysmal--probably because of the proprietary nature of the smaller rooms.

Despite those complaints, Sundered has turned out to be a fun, addictive game that I can’t get enough of. This gameplay loop really works for me, and while I sometimes wish I wasn’t doing so much backtracking, it’s not a big enough deal that I’m dissuaded from playing. If you, too, like this kind of loop, I think you’ll get a kick out of Sundered.