The good news is that deep down it's still Carcassonne

If you are a fan of tabletop strategy games and haven’t heard of or played Carcassonne, I can assure you that you are missing out. A brilliant game that can be played great with two all the way up to six players, it also has a fantastic level of depth underneath its cute medieval exterior. But while the idea of playing Carcassonne on the Nintendo Switch sounds like a great idea, unfortunately, on top of clumsy UI and a dull appearance it also doesn’t make use of the Switch’s hardware to the fullest. 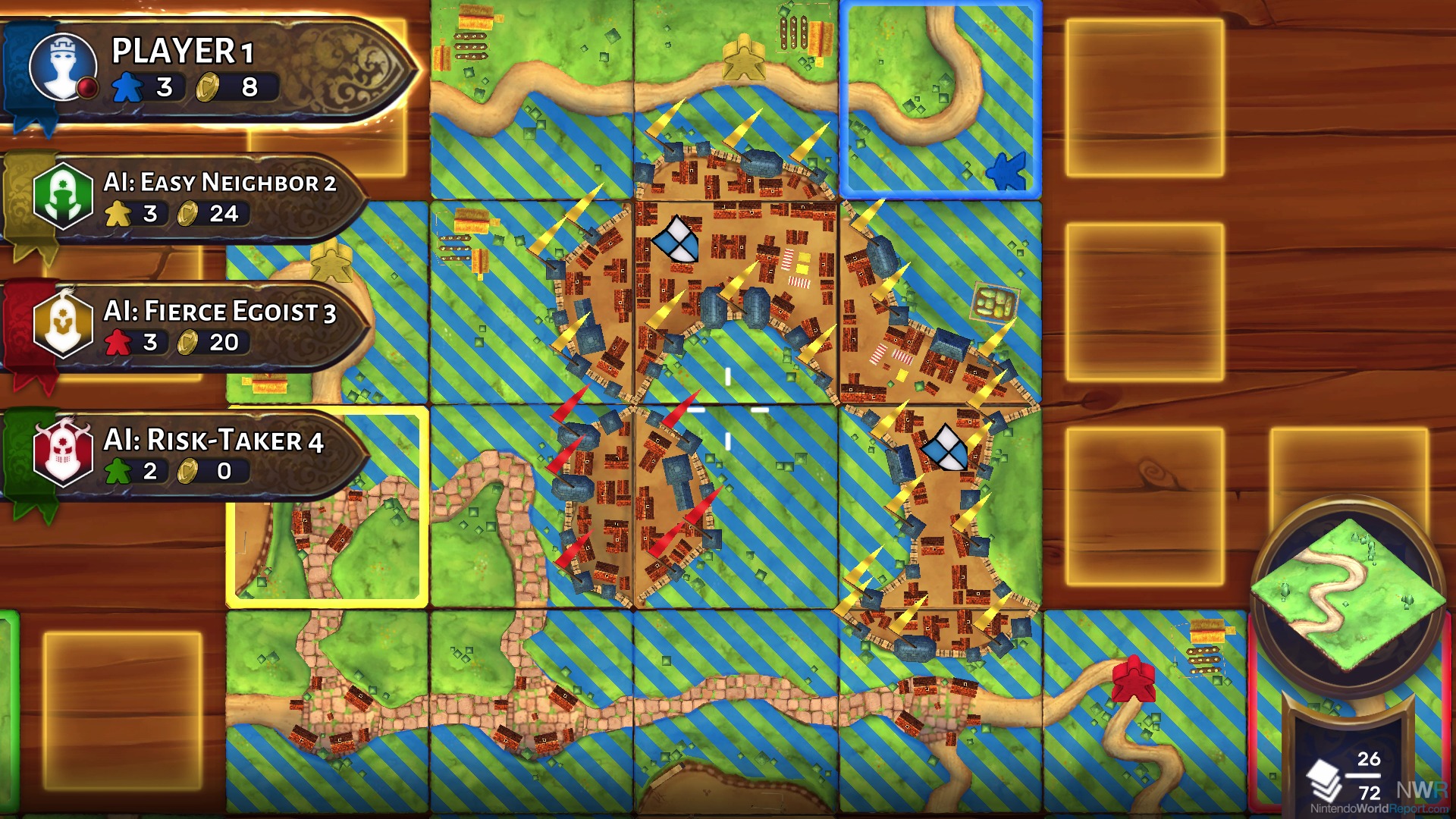 The game of Carcassonne is a wonderful take on the strategy genre. Tile by tile, every player builds a huge world together - with the goal of claiming different structures and scoring points when completing them. By erecting cities, paving roads, surrounding monasteries and farming the fields, there are four different ways to earn points.

Claiming cities and roads work very similarly. When a tile is drawn the player can place it on the map wherever it can fit into the mold. You can claim cities by placing one of your seven meeples (the little adorable humanoid game pieces) on top of it. Once a city is completed (encompassed with walls) the player who owns it gets two points for every tile in the city. This obviously encourages players to build vast cities and rake in as many points as possible. Where things can get interesting, however, is that your cities can get stolen by other players if they connect their city to yours. An ownership skirmish of sorts can happen here, for the player with the most meeples on a city gets the points when it’s completed, with the players sharing points if it’s a tie. All of these rules also apply to a road, with the only major difference being that the player scores one point per tile instead of two. 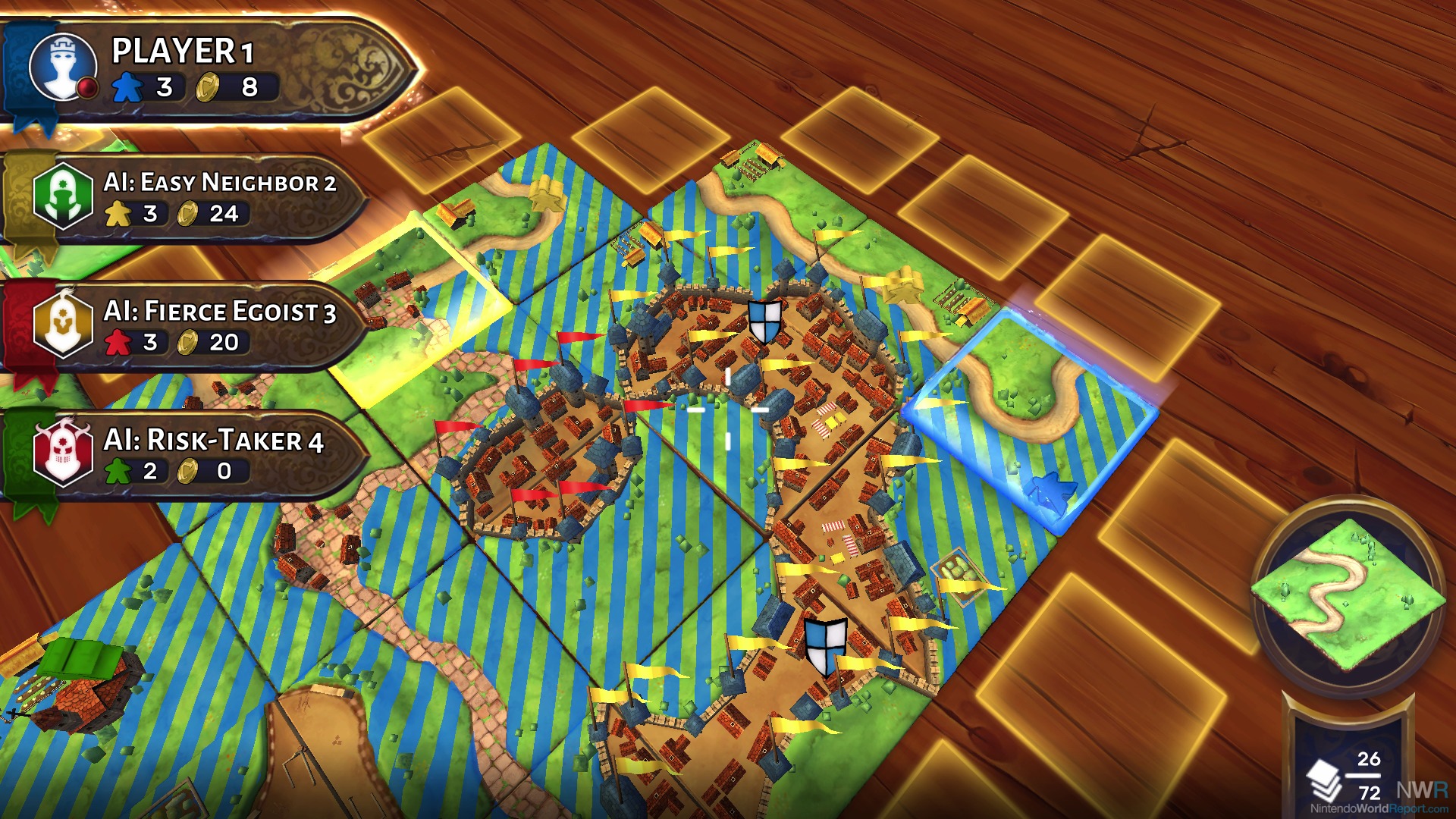 Monasteries are scored completely differently than cities and offer another wonderful wrinkle into the gameplay. In order to score points and gain your meeple back to your supply it must be completely surrounded by other tiles to score a cool nine points. Scoring Farmers on the other hand is quite a different affair. Unlike any of the other meeples, Farmers stay on the map - after they’ve been placed on their back - until the end of the game. They get three points for every completed city that their fields are touching, and can be the ultimate game changer at the finale.

Two of the smaller Carcassonne expansions are included in this version, both The River and The Abbot. The River sets the game up early with a larger map, while The Abbot adds a new special meeple into the mix to help score monasteries and newly added gardens in a unique way. One other expansion “Inns & Cathedrals” is available to purchase as DLC on the eShop for $6.99. 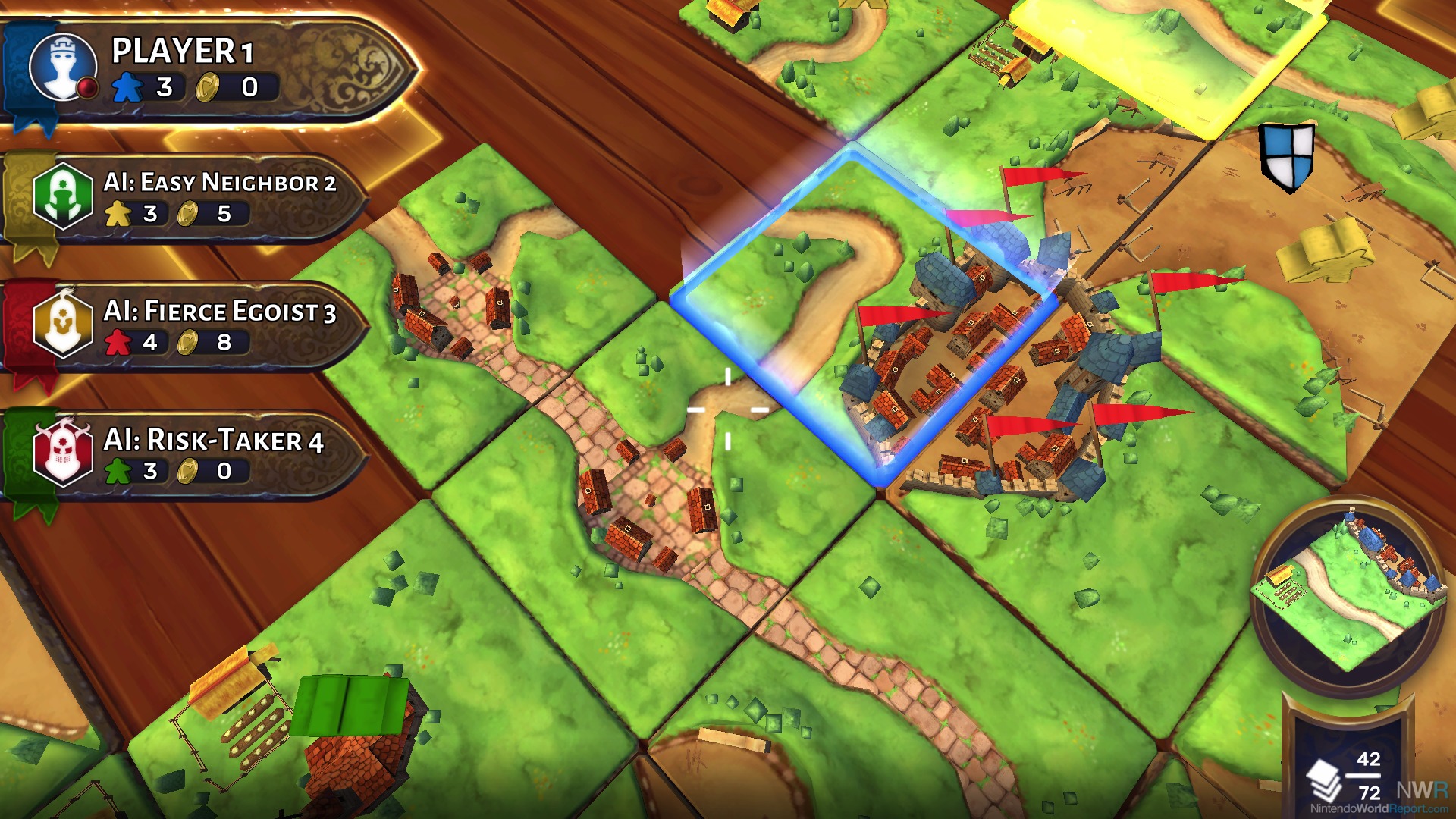 One of the nice things about this version is that some animations are sprinkled throughout the game. Cities and roads vary in appearance depending on if they are finished or not. Meeples hop up and down to help visualize them upon each players turn. A cool option to help players see what fields they own is available to turn on in the options menu, great for beginners and probably best for this iteration. To my pleasant surprise the camera can be moved from the isometric view it sets you in to the standard top-down view, a much better way to understand what is happening on the board.

Which leads me the unfortunate news, that while the game of Carcassonne is one of the best and most approachable strategic tabletop games (and one of my favorite games of all time), this version simply has too many flaws to compare to other digital versions I’ve played. While the menus look great, the music is nice and calming - sticking to a pleasant medieval-folk style - the game pieces just don’t look very good, as I found them hard to even understand what was happening on the board. Everything has a low-polygon look to it. The roads are big and wide and the monasteries are so small that they look like they are part of the roads. All of this wouldn’t have been a big deal, but when it hinders the actual ability to understand everything on the map, it can get quite frustrating. 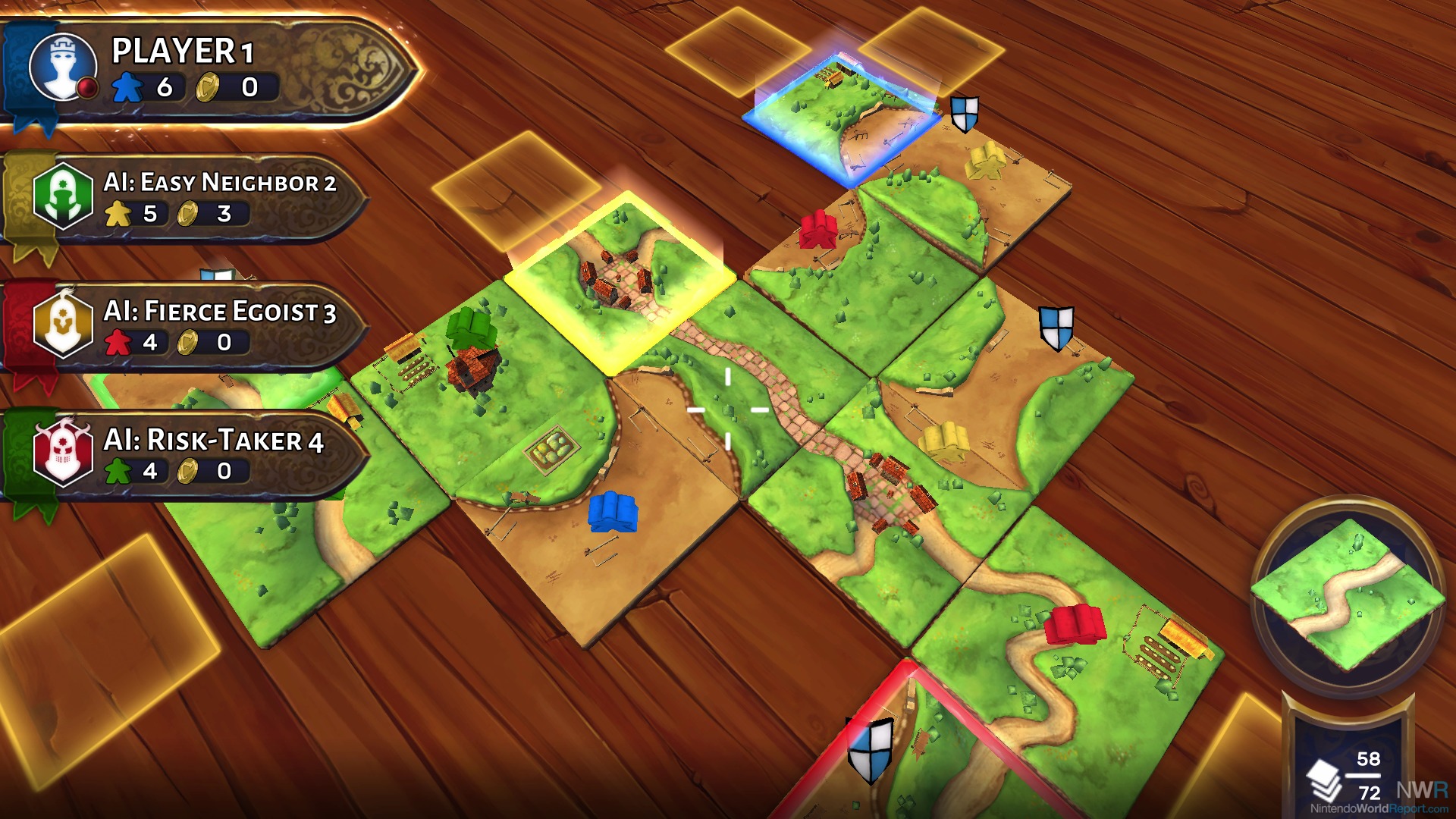 The camera also suffers from other issues. After zooming in to observe a tile you have just placed the camera can get stuck and won’t be able to zoom out while the computer is making its move. Unfortunately there is no option to use touch screen controls on the Switch’s big beautiful screen in handheld mode, and to top it off, the on-screen cursor replacement is just slow enough to be aggravating when moving around with. Placing a meeple on your tile is mapped to the same button as ending your turn, so there were a few times where I accidentally placed a meeple when I didn’t want to - and I ended my turn abruptly after thinking I was placing a tile. For the final sour cherry on top, there seems to be no way of shutting off the loud and obnoxious rumble consistently showcased during the game.

The nice thing about Carcassonne is that at its bare bones, it’s a fabulous game. The war and tension that can happen between players as they try to take over others’ features can be exhilarating as they pray and hope for the perfect piece to be drawn. Unfortunately, this version does have too many ugly blemishes to recommend over other digital versions available on other platforms. But if your only avenue is playing on Switch, you can still get definitely some enjoyment out of playing locally against your friends or against the varying difficulty levels of the computer. And hey, at least you don’t have to clean up the game pieces when you’re done!