The game's entertaining coaster editor can't save an underwhelming experience.

Rollercoaster Tycoon is one of the greatest video game series ever made. The originals, made by Chris Sawyer and his team, kept me hooked for hours on end and are my fondest memories of a video game. Everything that happened during the gameplay loop felt raw and instantly required a reaction from the player. This is why Rollercoaster Tycoon Adventures, a title based on the mobile version, doesn't exactly leave an impression. The connection between you and the world is extremely minimal, which quickly made Adventures boring to look at. It has the general idea of a Rollercoaster Tycoon game, but it fails on plenty of fundamental levels.

If you are looking for what Rollercoaster Tycoon used to be, you won't find it here. Instead of hiring employees and actively following your customers, this version of the theme park simulator focuses on the building aspects. No longer will you hire employees to do your bidding or really feel you are steering the day-to-day operations. Instead, you are building attractions and facilities to keep your guests happy. Your numbers will go up and down, and with statistics you will find out what needs to be changed. Adventures doesn't really offer fun indicators as there are no longer lines at the attractions, nor can you see the costumer's thoughts in any coherent way. 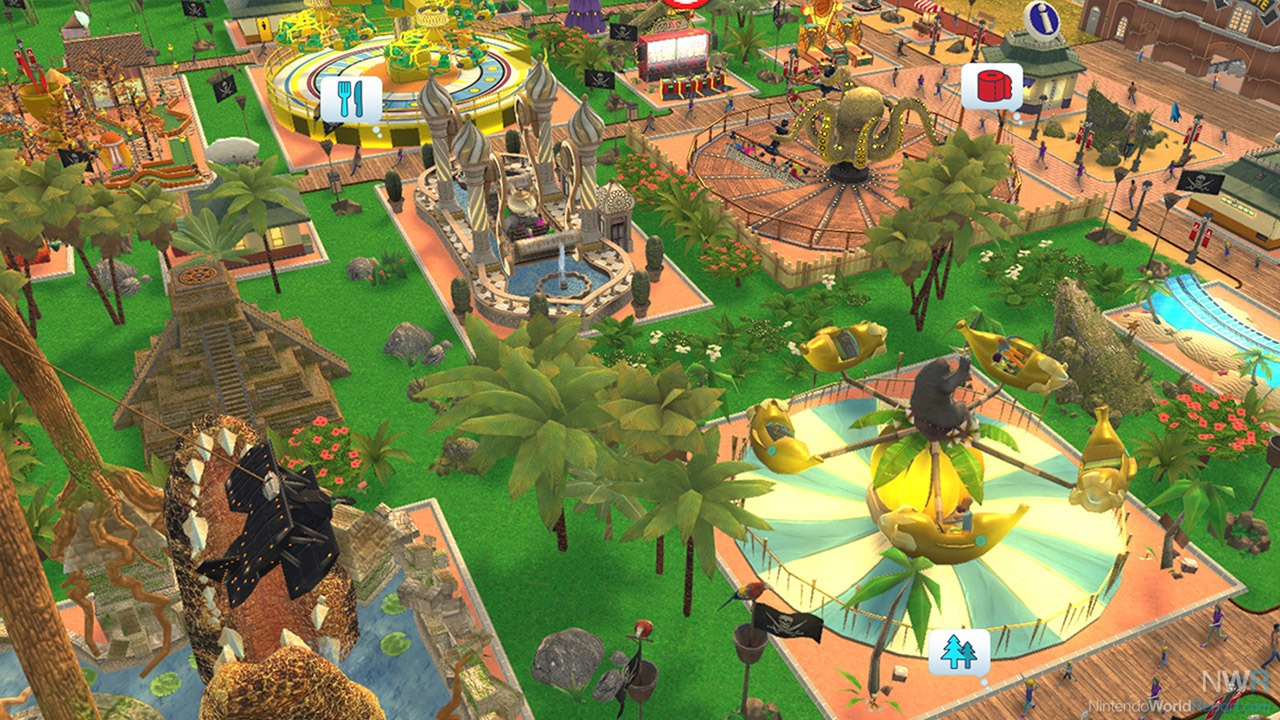 Rollercoaster Tycoon Adventures was set on building a wall between me and the game from the outset. For the first two hours, I tried to make it fun by making neat arrangements and building up a park that I would love to be in. The problem is that it felt incredibly empty after those initial moments. Once again, I would put an attraction down and see how customers would barely touch it. This is what made the originals so good: you got the instant feedback you needed to push forward. Now and again, you will get some feedback, but that mostly comes down to something being simply good or bad. When I tried to solve a problem, the customers would remain negative. A good example of this is how I would place additional arcade machines to satisfy the crowds, but it almost seemed like only one cabinet seemed to exist for them. It felt discouraging.

The greatest interaction that the game offered was with the coasters. Within the coasters, you can change up the individual nodes and change the structure the way you want. I was able to change the height, alter the curve or move it further in and out. It was possible to make your own simple coasters, which worked surprisingly well. In particular during the sandbox portion of the game, I would go for the full two kilometers and build something absolutely massive. This is literally the saving grace of the package, and even then, you can't really do anything outside of further tweaking what you made. You can't hop into the ride or get any strong feedback for a future project.

Outside of the Sandbox mode, where you can build the park with everything unlocked, there are two more ways to play Rollercoaster Tycoon Adventures. In the Adventure Mode, you will build a park from absolutely nothing and try to earn everything over a longer period of time. You won't have much money to do whatever you want with, and new attractions need to be researched before you can use them. In addition, the game throws you curveballs that can have an impact on sales or the hygiene levels within your theme park. This is how likely how I experienced the game the most, and it suffers from all the problems mentioned above. The player will, at least, encounter some unique situations that need to be dealt with swiftly. 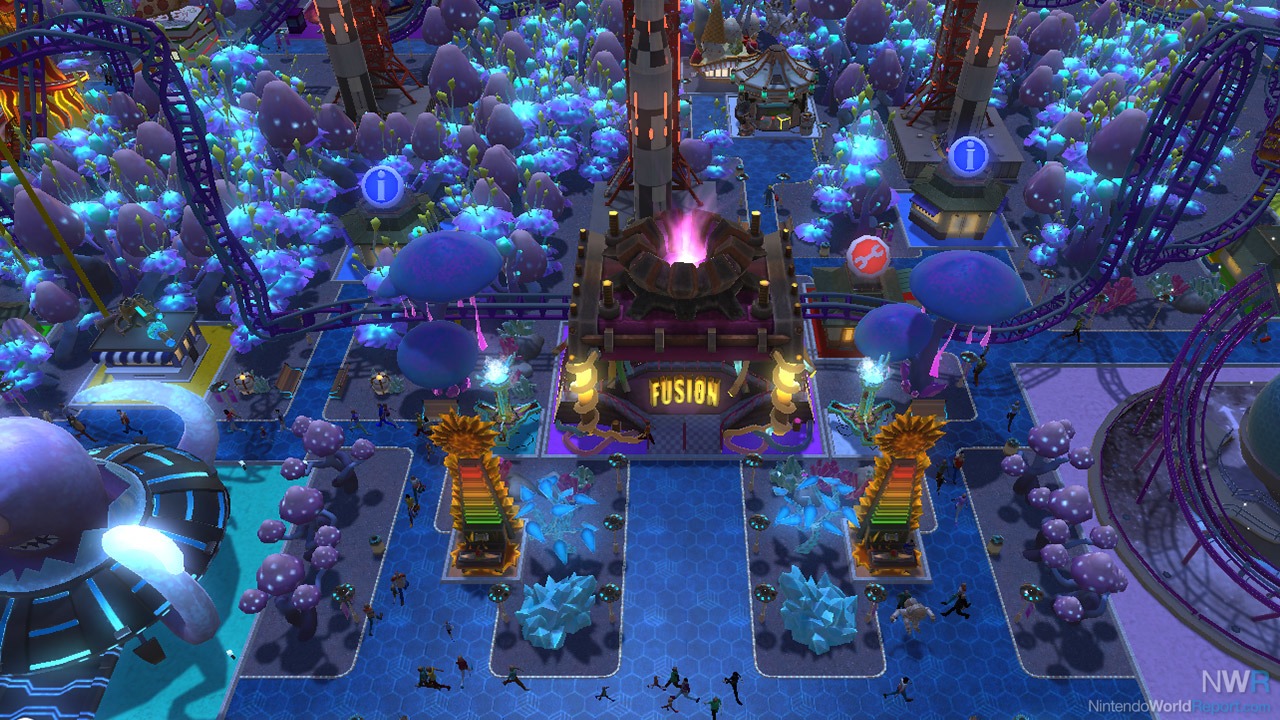 The most fun I had was in the Scenario Mode. Here, you have to deal with restrictions that are placed on you from the get go. Within these restrictions, you will need to react speedily and get the job done fast. There are three awards to shoot for on each of sixteen stages, depending on your performance. While it works within the boundaries of Rollercoaster Tycoon Adventures, it benefits quick play sessions and knows to not waste much time. This content is very appreciated and offers a more traditional video game challenge.

Rollercoaster Tycoon Adventures doesn't run fantastic on the Nintendo Switch. When you really start building, the frame rate is the first thing being sacrificed for the sake of playability. It slows down the general movement more and more to a halt, the more you continue to build. At the end of building a massive park, the movement couldn't keep up with my button presses and stopped registering sometimes. In an ideal world, the game would've restricted the building space to maintain a decent performance. While you won't keep building into infinity during Scenario Mode, it heavily impacts how you approach the other modes. Regardless of that, Adventures is at least a colorful endeavor that isn't visually draining by any stretch.

Rollercoaster Tycoon Adventures is somewhat of an underwhelming game. While a younger player could find potentially some fun in building attractions and coasters, it will feel absolutely flat for most. The placing of buildings doesn't continue to entertain, and the feature set is remarkably slimmed down. There is some fun to be had in the Scenario Mode, but even that has its fair share of limits. The worst thing about Adventures is its performance. There were plenty of instances where the game slowed down for no apparent reason. While Adventures absolutely looks the part, it doesn't stack up to any of the older games. This game doesn’t quite deserve its moniker.

i paid £39.99 for this game and feel like I've been robbed no employs cant seem to fix rides its just putting down buildings so disappointing wish i could get my money back