Contrary to its name, not an unwelcome guest.

Party Crashers is what you get if you mix a multiplayer racing contest with collectable weapons and power ups and lather it with a fresh coat of multicolored neon. A top-down racer at its heart, in elimination mode you compete against AI-controlled cars or your friends in the room on a cramped race track with Mario Kart-style item pickups that help you knock out or destroy your opponents while a red line follows the pack that eliminates you if you lag too far behind. A match constitutes 10 rounds, awarding points based on placement and a winner is determined by who has the most points at the end. 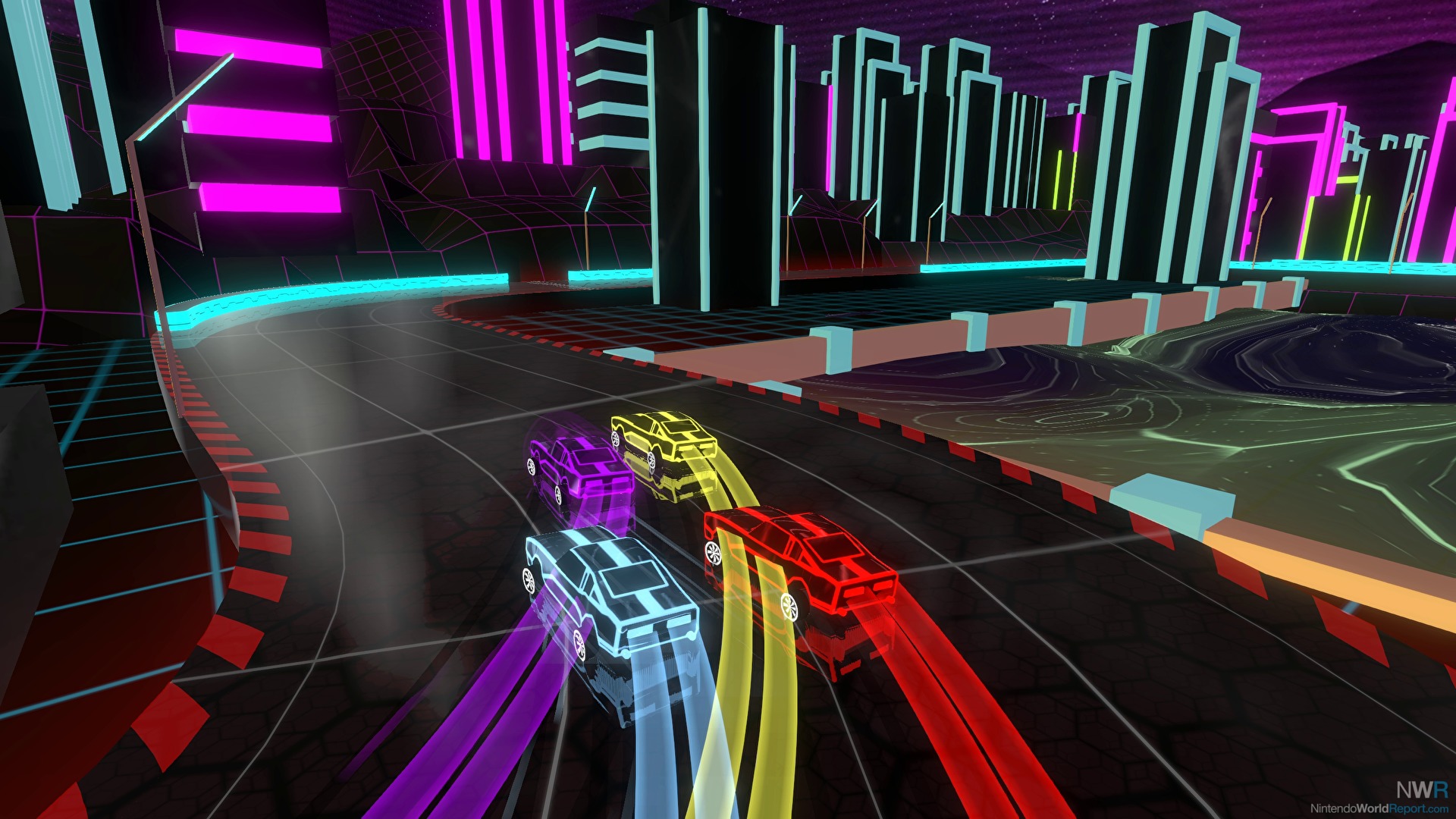 This is the exact kind of fun I’m looking for on a weekend night in with a few friends. The party atmosphere in Party Crashers is coupled with an experience that is quick to grasp and allows just about anyone to be competitive from the outset. Matches are brief enough to keep a brisk pace and not let a loss sting too long. Additional modes that unlock after 10 matches of elimination (race, time trial, and battle), along with loads of customization options when setting up matches, add some variety to the mix, though I expect most of the time will be split between elimination and battle. 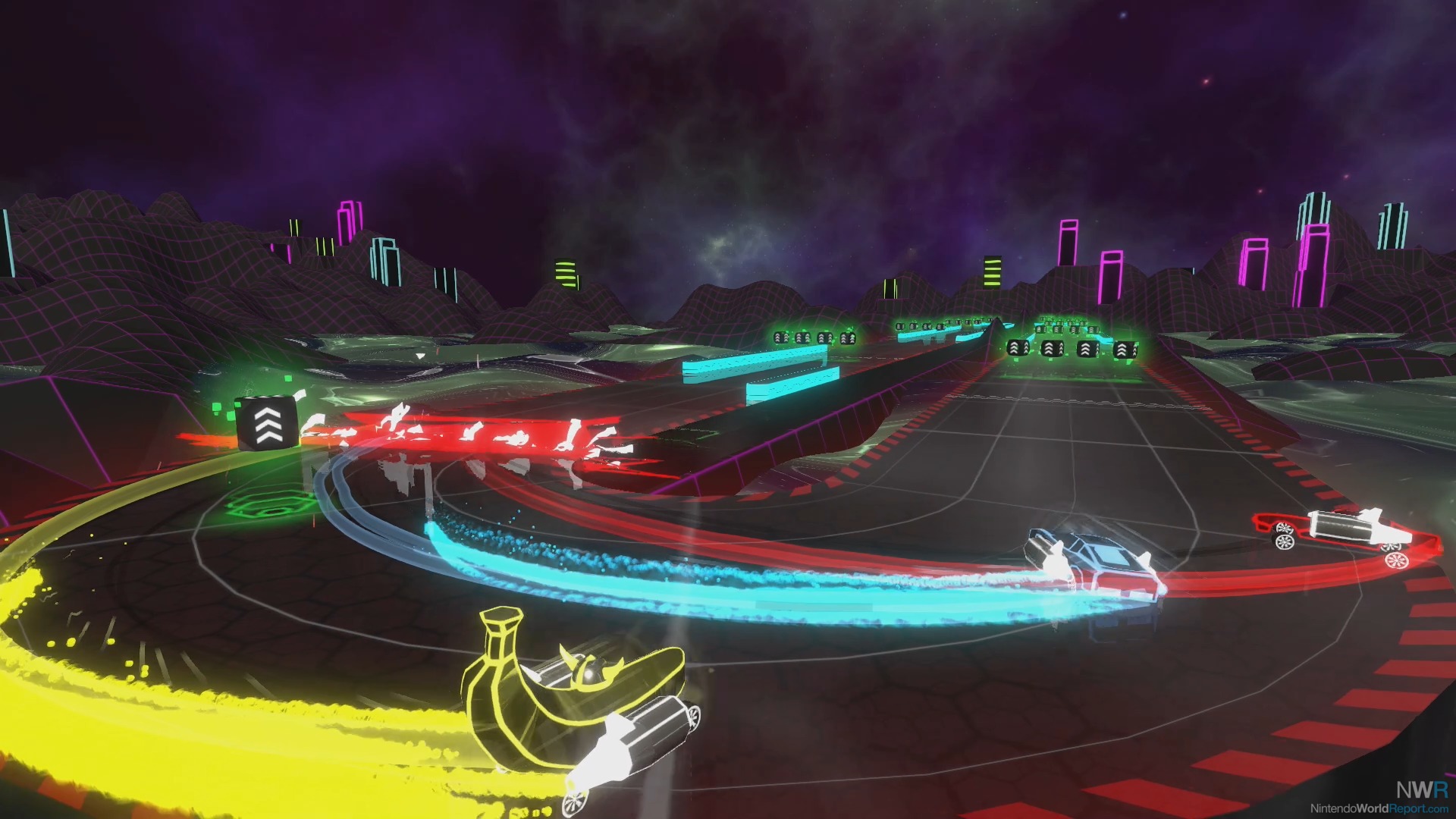 That’s not to say there aren’t bumps in this road. I noticed some rubberbanding playing against enemy AI when they didn’t have any power-ups that’d let them gain an appreciable speed-up. Additionally, at times the framerate skipped and stuttered in a way I wouldn’t have expected for what I don’t think would be demanding to the Switch, mostly in turns and when multiple weapons are being fired off at once. This was more noticeable in elimination mode than any other, and while predictable when it’d happen, still was aggravating. Finally, when you start, a decision was made to lock everything except elimination mode until you complete 10 matches. Mercifully, there is an option to unlock everything in the settings, which makes this a minor quibble.

Those fault lines make it more difficult to give a recommendation quite as glowing as the cars and Tron-like gridlines, but Party Crashers earns its keep with its simple, self-confident gameplay, variety of choices given on how you want to play, and concise match play that encourages passing the controller. For those not extra sensitive to framerate hiccups or occasionally cheap AI and have some buddies to play with, Party Crashers has enough tread on the tires to warrant several runs around the track.

I played an early version of this a year ago at PAX Aus. It was fun, but didn't make me want to buy it. However, I did buy their other game, Party Golf, very soon after playing it at PAX.

I played an early version of this a year ago at PAX Aus. It was fun, but didn't make me want to buy it. However, I did buy their other game, Party Golf, very soon after playing it at PAX.

I haven't played Party Golf, what are your thoughts on that one?

I have a soft spot for games like Super Off-Road and Micro machines, which Party Crashers does a great job of scratching that itch.  I can see why it may not be enough for a buy for those who don't though.

Party Golf gets repetitive, but is a lot of fun when playing with other people. You can play it alone with CPU players, but its not quite as fun.
There is also a huge amount of different modes and settings to change up the gameplay.