When I first heard Crayola Scoot’s name, I laughed. Crayola and video games aren’t exactly the chocolate and peanut butter we’re all dreaming of. Frankly, I didn’t expect Crayola Scoot to even really be on my radar. Then I got curious when our E3 2018 coverage showed off that it was clearly inspired by Tony Hawk games and Splatoon. And after I played Crayola Scoot, I was pleasantly surprised to discover that, while not without its issues, it was a dependable extreme sports-styled video game with a good deal of gameplay variety and a nice trick and combo system.

The entire vibe feels a lot like Splatoon, from the character and arena design to the fact that there’s colorful ink oozing everywhere. The flow and control is all Tony Hawk and Skate, though. Push off to get your scooter rolling while using the right stick to jump into the air with a combination of buttons and analog sticks to grind, flip, spin, and trick. A tutorial helps cover the basics, but it definitely took me a little adjusting before it all clicked. From my time playing, it didn’t appear to be quite as deep as the beloved extreme sports games of the past, but with more complex tricks tied to analog stick flicks and combos, it’s a little more nuanced than the atmosphere would suggest. 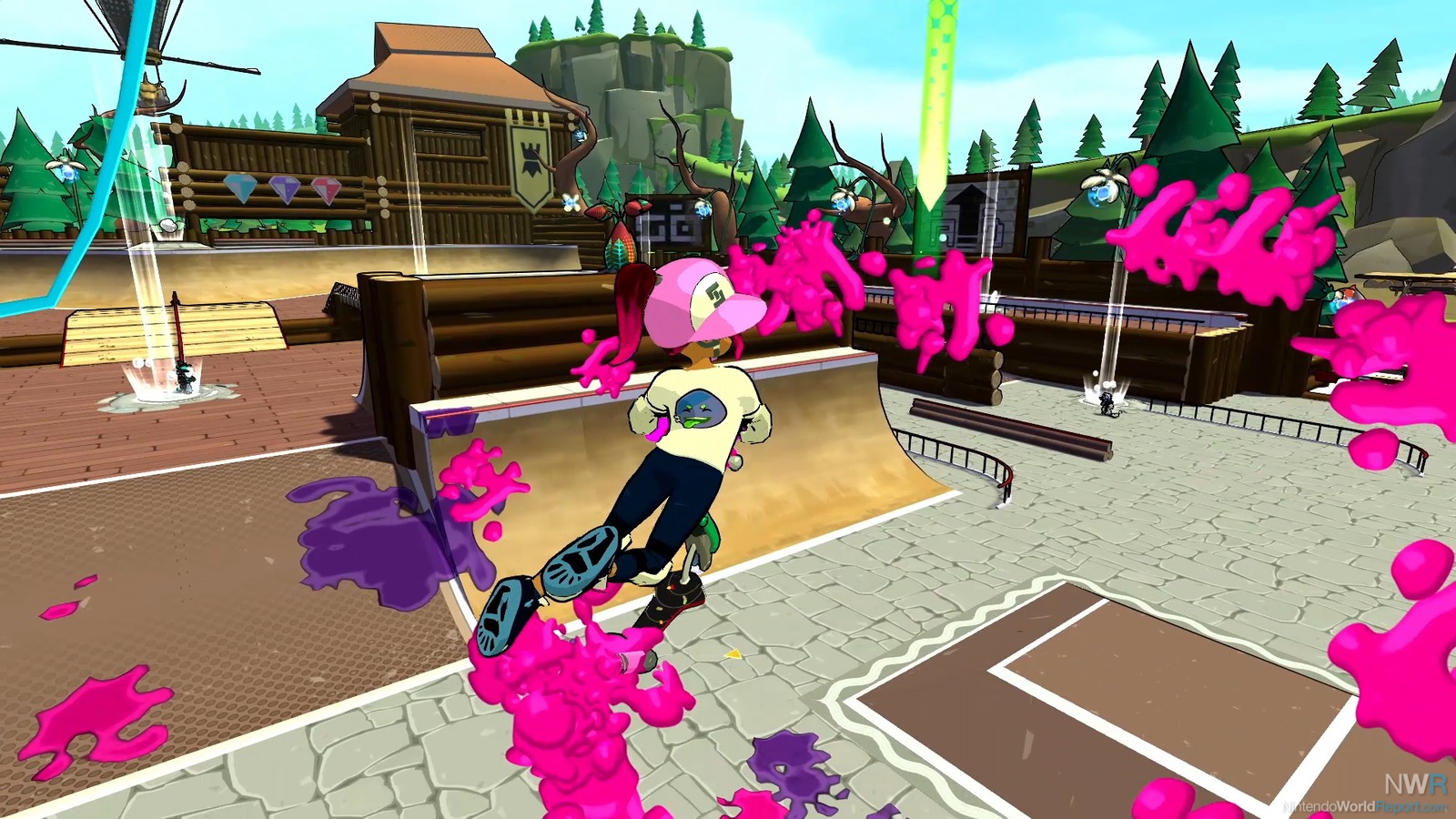 My favorite tricking mechanic is how combos are handled. Once manuals and reverts were introduced into skateboarding games, infinite combos were the expectation for high-level play. In Crayola Scoot, your combo ability is tied to your boosting and your ink. When you boost, ink shoots out of your scooter and as long as you have ink in your reservoir (refilled Splatoon-style by riding through your color), you can keep on tricking. It adds a defined end to your trick, while also setting up a push and pull of needing to refill the meter before you can try to land another huge combo.

Tricking was my favorite aspect, with all the modes that emphasized combos and high scores being my preferred ones, whether it was a high-score run or the combo competition of S.C.O.O.T. (aka S.K.A.T.E. from the old Hawk games or H.O.R.S.E. from playground basketball). A number of other modes keep the gameplay varied, but the Splatoon Turf War-esque Color Frenzy wasn’t that much fun. Imagine if instead of you shooting the ink in front of you in Splatoon, it just trailed behind you or splashed around where you landed on the ground. Color Frenzy doesn’t have a great feeling of progression because of this. The team variant is much better, likely because it evokes the camaraderie of Turf War a lot more. Other modes include Splat Tag, where you try to avoid or catch other scooters, and Crazy Crayons, where you and every other player frantically roam around a map trying to collect crayons. I wasn’t wild about any of these other modes. 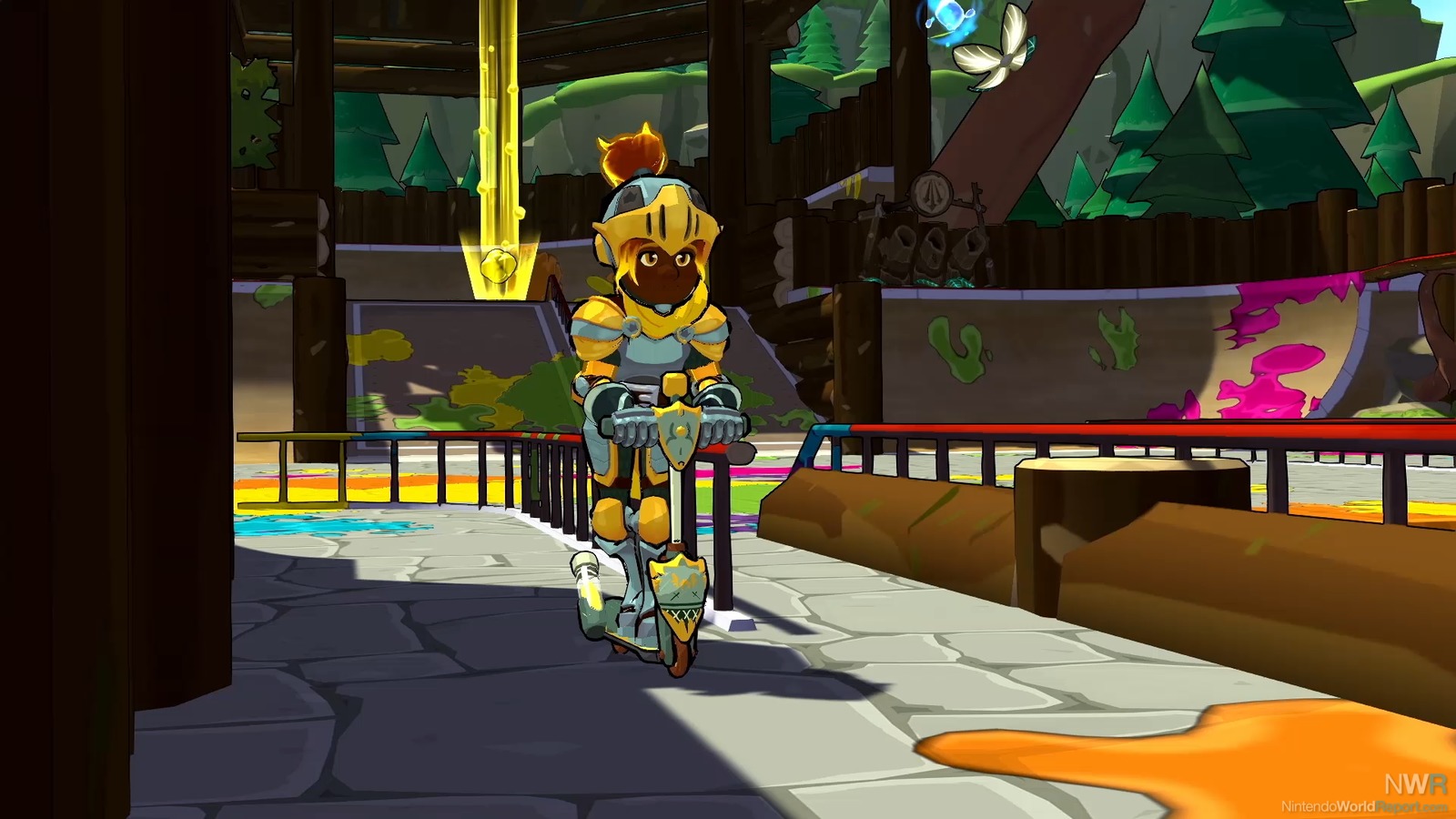 The single-player portion involves participating in a variety of challenges across three areas while leveling up and unlocking one-on-one challenges against scooter legends that in turn unlock more content. Items can be purchased at an in-game shop, with new scooter parts adding stat tweaks and a variety of cosmetic outfits adding style to your custom character. The single-player gets demanding, but completion of each specific challenge isn’t required for overall completion; progression is primarily tied to just playing and earning experience points. That’s cool because it provides a gentle experience for the children the game is primarily aimed for but also doesn’t make the whole game an infantile walk in the park.

Crayola Scoot also has four-player split-screen, playable in a separate “arcade mode,” where you can mess around and compete in the various modes and levels. In my experience, split-screen ran fine and reminded me a lot of the multiplayer modes present in older Tony Hawk games. While the ideal is to use a Pro Controller or dual Joy-Con, the game can successfully be played with just a Joy-Con on its side, making multiplayer a little easier to pull off. 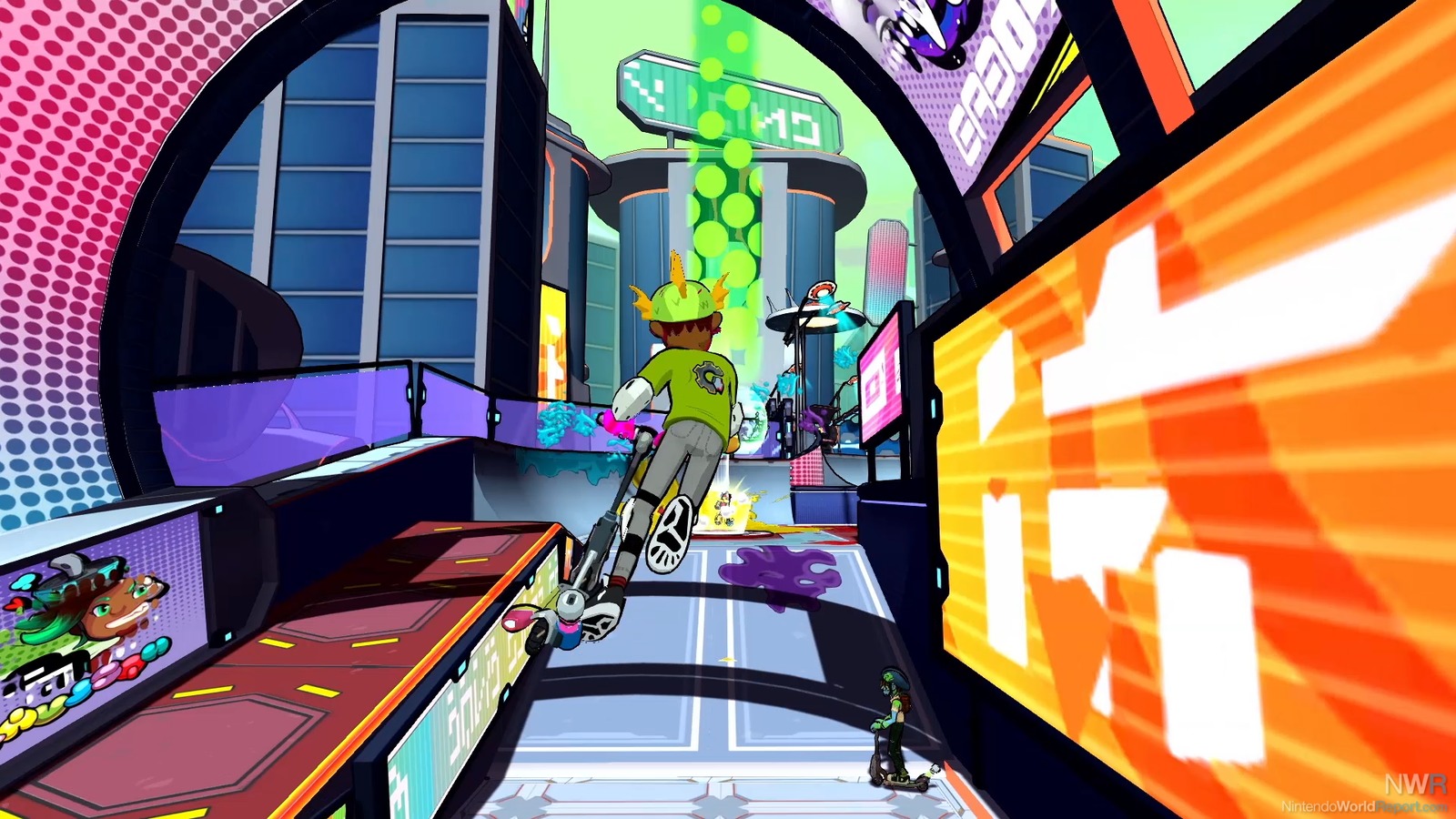 While the fact that there is a game called Crayola Scoot is still funny to me (just say it aloud; you’ll probably smile or grimace), it’s no joke that this game is actually good. This isn’t a trashy cash-in or a poor licensed title. No, Crayola Scoot is a totally fine kid-centric extreme sports video game peppered with some nice touches, like the Splatoon-esque combo system or the gentle progression nestled within a harder series of challenges.