Put away those Pro Controllers and grab a Joy-Con, it’s party time!

Nintendo’s never been afraid to tinker with the formula of their flagship board game series; however, changes over the years have shifted this once-beloved franchise to a mere afterthought. Outcry for a return to the more classic style and the addition of online play have has been heard for years and with Super Mario Party, those calls have finally been answered, sort of. We do see the classic Mario Party comeback, but the online is limited to a mode featuring a series of five minigames. Despite that, there are plenty of other modes that keep the party going.

Recent installments in the series have made some significant changes to the main Mario Party mode, but unfortunately these changes were not met with positive response. Instead of traveling the board as individuals, everyone was placed in the same vehicle, which would then move around the board at the same time. Luckily this is a thing of the past, as the classic Mario Party play is back. Players traverse the board aiming to collect as many coins as possible and in turn use those coins to get the ultimate prize: stars. Whoever has the most stars at the end of the game wins, with coins being the tiebreaker. Along the way are a number of different spaces that throw kinks in your plan to reach the Star Space. Whether it be a Bad Luck Space, which sees Kamek unleash different punishments upon the player, or an Event Space, which varies depending on the board, you always have to be on your toes and expect the unexpected with each roll of the dice. There are a total of four different boards, each promoting different outcomes. One of the boards is more tight knit where many stars can be collected, while another requires you to travel longer distances, resulting in a smaller star count. I found the downtime between your roll and the minigames could be a bit drawn out when playing against computers, but the pacing feels better with friends. 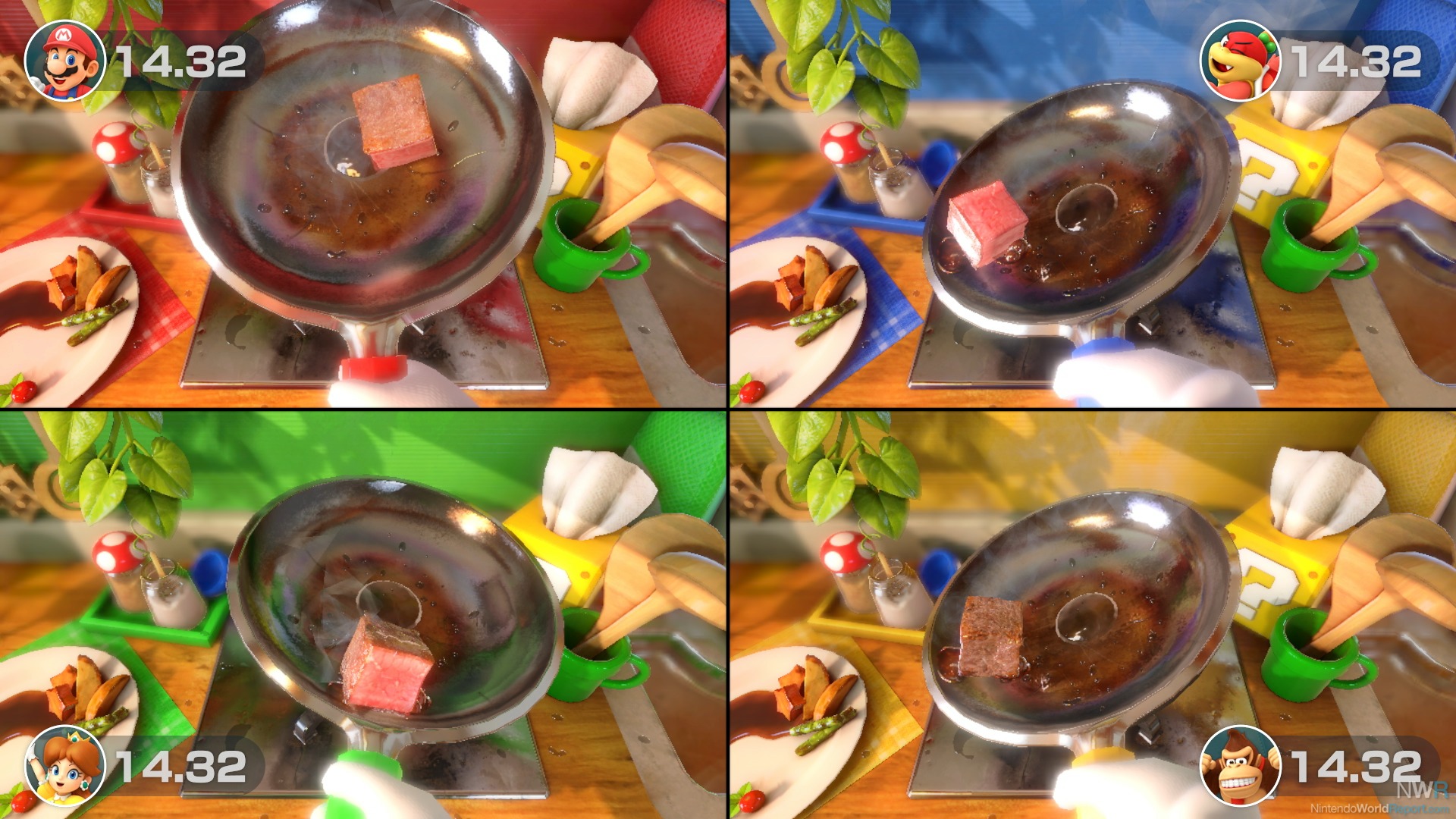 After everyone has taken their turn, the round ends with a minigame. These bite-sized competitions pit players against one another, or sometimes break them off into teams to see who can come out on top. Super Mario Party has over 80 minigames featuring a wide range of playstyles. Some are dependent on fast reactions, others on memorization, but almost all will be sure to get you talking smack to your friends. There are a large number of games based on motion controls or the Joy-Con HD Rumble feature, but don’t let that scare you. These games are actually a ton of fun and are pulled off very well. Sizzling Stakes was one of my favorites, where you must brown all the sides of a cube of steak using the rumble to feel when it was done and a flick of the wrist to flip it. Candy Shakedown is another good example of moving the Joy-Con around to drop all the candy from a jar. There are plenty of minigames that use traditional controls as well, like Slaparrazi, where you must get closest to the camera while slapping opposing players out of the way. I found the balance between the different styles to work really well, and for the most part I really enjoyed the assortment of games. There are a few stinkers, but the good far outweigh the bad. An interesting thing to note is you must play with a single Joy-Con, which means no handheld mode outside of tabletop play.

For anyone that’s played Mario Party Star Rush on 3DS, you’ll be familiar with the concept of allies. On each map there are Ally Spaces, which add a different member of the Mushroom Kingdom to your team. This will net you an additional dice roll of 1 or 2, but also give you that character’s dice block. From that point on you’ll have the option of rolling the newly acquired ally’s dice as well as the dice you begin each game with. Each character’s dice block is different, with some being high-risk, high-reward and others being more conservative, but it gives a sense of strategy that feels really satisfying. The best part is you aren’t limited to just one ally, and you can even find an item called the Ally Phone, which summons one to your side. 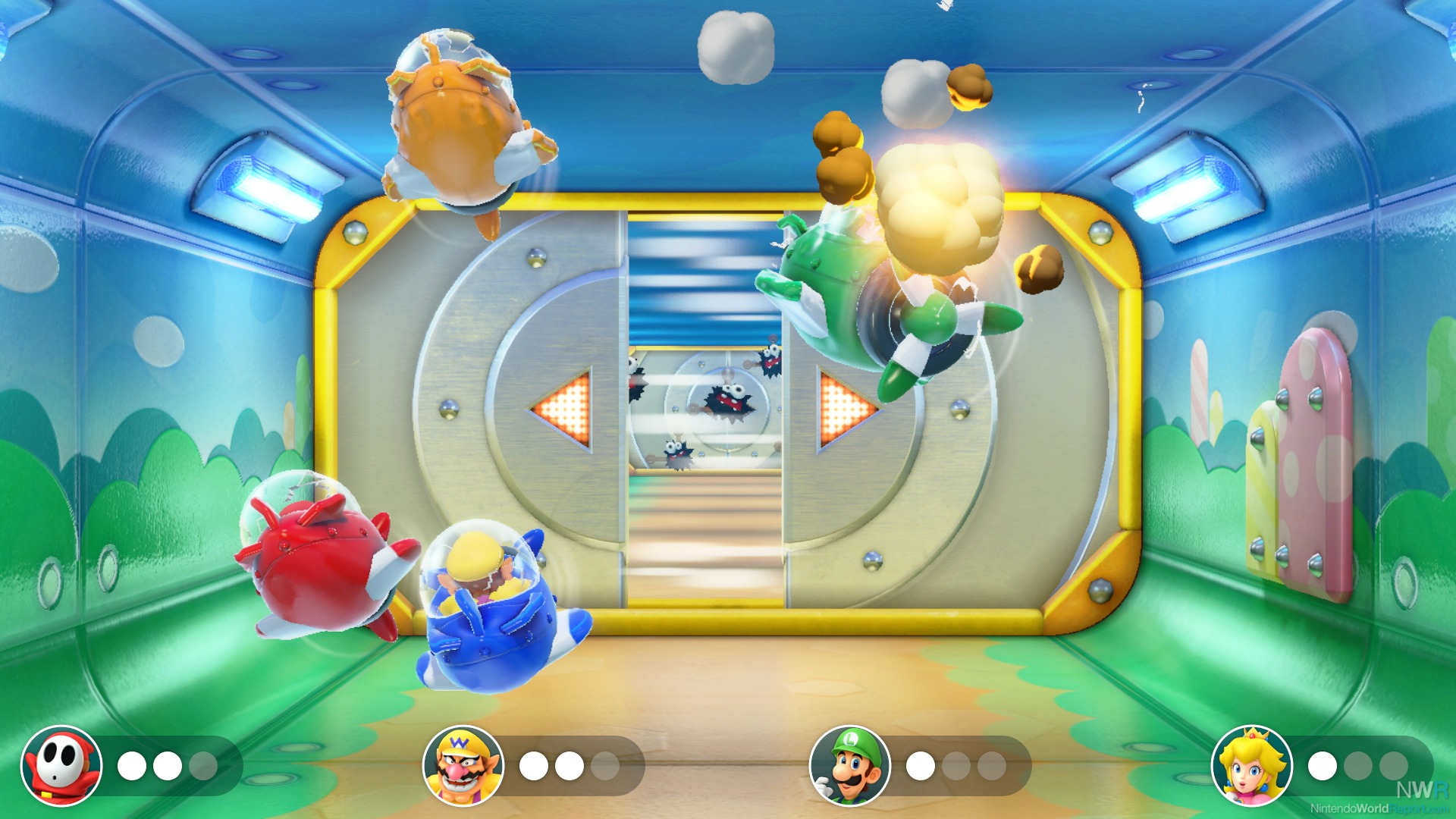 Another carry over from Star Rush is Partner Party mode. Instead of traveling on a mostly linear path, the entire board is a grid to travel freely upon. The goal is similar, as you want to collect as many stars as possible, but a huge component is picking up the partners scattered around the map and forming large teams. Dice rolls become shocking large as you collect more allies, but the trick is you must land exactly on the star spot to be able to buy it, which can become challenging. Often you’ll find yourself patrolling around a star for a few turns waiting to roll just the right number. Luckily there are other spaces that yield benefits in the area for you to aim for in the meantime. There were a few instances where the AI opponent would literally circle in the same path, which was a bit disheartening as they completely avoided getting some allies or coins. Originally I thought maybe it was just the difficulty level, but even the harder opponents fell into this trap. But don’t be fooled into thinking this is just a side mode, as a game of Partner Party will often take just as long as classic Mario Party.

River Survival and Challenge Road are two other new modes that provide different twists. River Survival is a co-op mode where you and up to three friends go rafting down a river by rowing the Joy-Con, all while racing the clock. Doing well in minigames along the way will add seconds to your timer and working together to avoid obstacles is critical. This is a surprisingly fun mode with multiple branching paths, but the minigames tend to repeat since there are a smaller number of 4-player co-op games. Challenge Road is a single player adventure where you’ll play minigames, but need to achieve a certain goal to move onto the next. Sometimes it’s just winning the game, but other times its hitting a certain score or rank. The difficulty ramps up as you continue to progress deeper down the road, offering a nice challenge when you need a break from the regular boards. 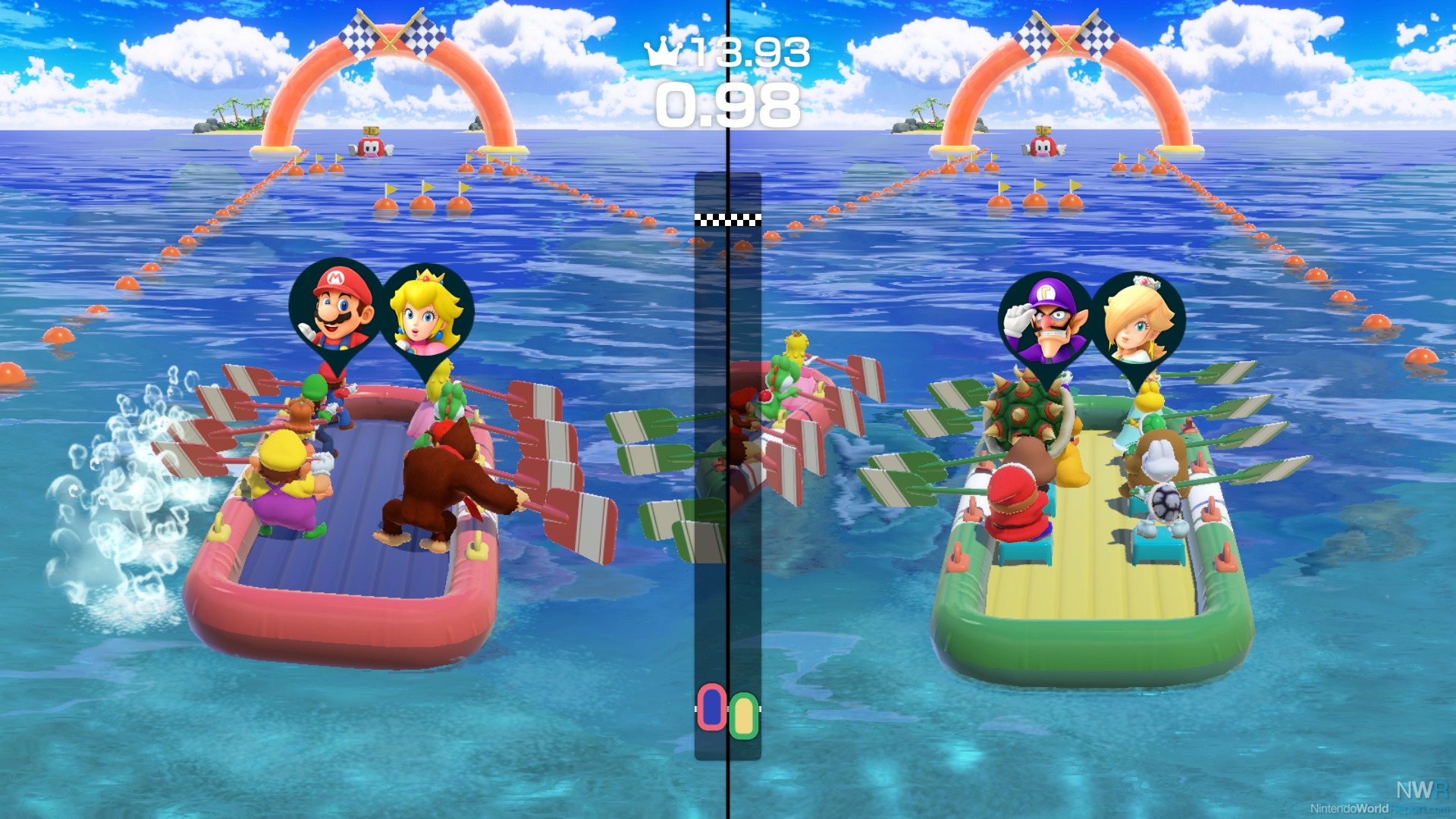 While those are the most hefty modes, there are a few other areas to check out for when you need a quick gaming fix. Sound Stage is wonderful to jump in and play for five to ten minutes spurts where all the games revolve around rhythm. The music is bumping and the games have you move your Joy-Con to the beat as you rack up points. Toad’s Rec Room is where you can find the cool multi-Switch games and there’s a minigame free play area to fully enjoy any and all minigames. Mariothon is the newly touted online mode which is a series of five minigames, but sadly servers aren’t live until the retail launch. We will certainly update this review with details about how this mode performs in the coming days.

**Update** As promised, we have an update for the online mode, Mariothon. Diving in I was pretty upset to see you can only connect with others online, allowing no option to have another person join locally alongside you. What’s even more upsetting is there are just 10 total minigames to play. These games are sorted into three different cups consisting of five minigames, meaning games are repeated in multiple cups. On top of that, there is only one active cup at a time, on a rotating basis, when connecting with random players. Aside from these major setbacks, the games themself run well, having no noticeable lag whatsoever. A cool feature is how the scoring works, awarding points for how quickly or how long you last depending on the game. Normal games that would end once three players are eliminated, continue on to see how far the remaining players can go, rewarding more points the longer they last. Overall, although the mode is fun, it won’t likely see much playtime as you repeat the same few games over and over. It’s a tease of what could be, but ultimately fails to add much value to the overall package.

Mario Party has seen its fair share of good and bad over the years, but Super Mario Party swings the pendulum back in the right direction. The return of the classic style is a welcome one, and the plethora of different minigames hit the mark more often than not. It would have been nice to see another board or two, but the assortment of other fully-fledged modes helps to mitigate that feeling.

The lack of boards is really disappointing, and honestly it could affect my decision on whether to buy it or not.

Recent installments in the series have made some significant changes to the main Mario Party mode, but unfortunately these changes were not met with positive response. Instead of traveling the board as individuals, everyone was placed in the same vehicle, which would then move around the board at the same time. Luckily this is a thing of the past, as the classic Mario Party play is back.

Except Kamek is taking over for Bowser spaces apparently.

Put away those Pro Controllers