A mega sequel that deserves its own series.

First announced in December of 2017 and long hoped for, Mega Man 11 has finally arrived. Its predecessor, Mega Man 10, came out in 2010, so it’s been quite some time since a new game tried to carry on the jump-and-shoot tradition. Reactions to the initial reveal of Mega Man 11 were mixed: you could hear “What happened to the classic 8-bit aesthetic?” or “The 2.5D hand-drawn style looks cool!” Comparisons were drawn to the ill-fated Mighty No. 9, but I am happy to report that Mega Man 11 is far better. I don’t think it’s the best game in the series, but it manages to hold its own, so let’s rock and roll.

Mega Man 11 sees the greatest departure from its predecessors in its visuals. The game looks much better since we first saw it last year. Rough edges have been smoothed over and the overall appearance is clean and crisp. If you hate the 2.5D look, this game won’t change your mind, but really neat details can be found in the background, enemies, and stages that make each level fun to go through multiple times. I didn’t find it as frustrating to have to replay a stage after losing all my lives or when playing on a different difficulty because the art style grew on me. Torch Man’s stage, for example, really evokes the feeling of a campsite with mountains, city lights, and trees that appear in the background while enemies like mechanical bunnies hide under destructible tents.

Players can choose from four difficulty modes: Newcomer, Casual, Normal, and Superhero. The easiest by far is Newcomer, where you have unlimited lives, frequent checkpoints, and your bird buddy Beat who retrieves you when you fall into a pit. Spikes hurt but don’t kill you in this mode, too. Casual Mode starts you off with five lives and similarly frequent checkpoints, but no avian assistance or toothless spikes. I started with this difficulty on my first playthrough and still found it plenty challenging due to the length of the stages. Normal Mode gives you two lives and significantly claws back the number of checkpoints in each stage. You also take double damage here, and I had to rely more on the in-game shop to purchase E-tanks to refill my health during sub-boss and Robot Master battles. Superhero is truly a test of skill and patience as you take triple damage and deal half as much damage to enemies compared to the other three difficulty modes. Perhaps most punishing of all, enemies do not drop health or weapon tank items to replenish your gauges. That said, I really appreciate how there is a difficulty settings for all levels of players, and the variety also adds replay value. 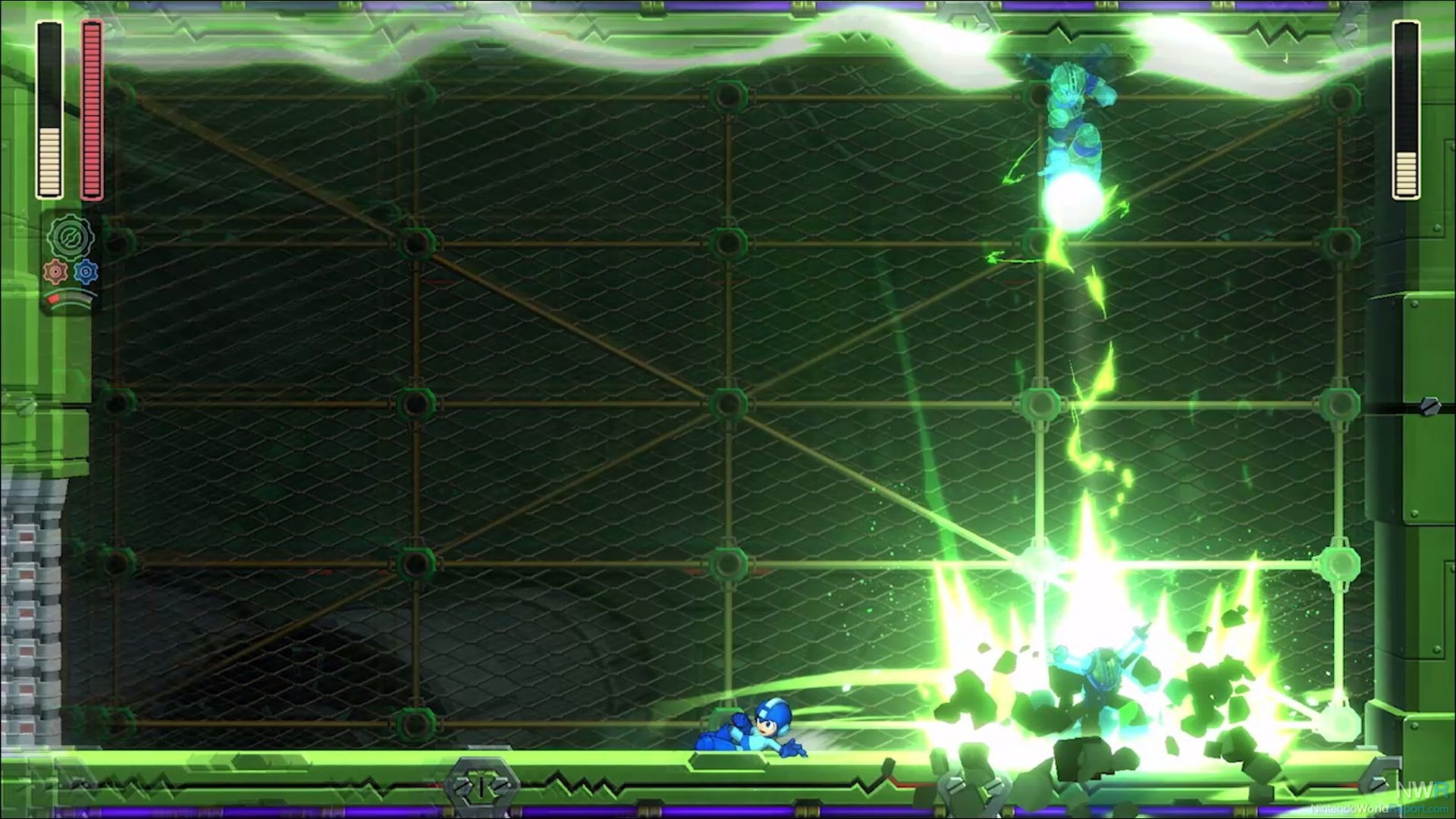 The physics and gameplay feel both familiar and different at the same time. The jumping and movement remind me of Mega Man 7 in that there is a little more weight to Mega Man, but in this latest game he falls more slowly. Figuring out the timing of precise jumps took more practice, and even after multiple playthroughs I still haven’t quite mastered it. Shooting and charging up the Mega Buster feels great and the Switch controls (whether on Joy-Con or Pro Controller) are really responsive. As I noted in my preview of the PAX West demo, the damage impact on the Robot Masters is still a little too subdued and it can be difficult to see when their invincibility has worn off after taking a hit. That said, the fights themselves are challenging and engaging as each boss either transforms into a different form or uses the Speed Gear or Power Gear to strengthen his attacks.

The Double Gear system is another major departure from previous games in the classic Mega Man series. With it, Mega Man can either slow down time with the Speed Gear or power up his Mega Buster with the Power Gear. Every stage in the game features areas that lightly or strongly encourage you to use one of the Gear abilities. I found myself regularly using the Speed Gear to slow down impending dangers like the walls of flame in Torch Man’s stage or give me more time to avoid Fuse Man dashing across the screen. An odd and somewhat frustrating choice with the Power Gear is that when you activate it, any charge of the Mega Buster resets. Since I’m often holding down the charge button, I would regularly turn on the Power Gear and fire my Mega Buster only to realize I needed to charge it again. It’s a small issue but one that kept me from using that Gear ability more often.

Video game music is my preferred choice for long drives, gym workouts, and JRPG grinding sessions, and my playlists always include a large selection of remixes and original tracks from the Mega Man series. Ultimately, in my mind, the Mega Man 11 soundtrack isn’t bad; there are a few stand out themes (Fuse Man’s, namely), but none of the music in the game approaches the greatness of the Dr Wily’s Castle theme from Mega Man 2, Magnet Man’s theme, or Splash Woman’s theme. On the topic of sound, I also have to mention the character voices. A few cutscenes shed light on the story, and I think the voice work is pretty good in these story segments. Call me a purist, though, but I don’t think the Robot Masters should be voiced. Their introduction and death speeches are cheesy, and they shout out their attacks as they use them. All of this noise makes them less menacing and less threatening. Give me the silent power poses of Quick Man and Heat Man any day. Launch Octopus was more intimidating with a downward thrust of his tentacle than any of the bosses in the Blue Bomber’s latest adventure. Do yourself a favour and turn off the voices in the options menu after watching the opening cutscenes. 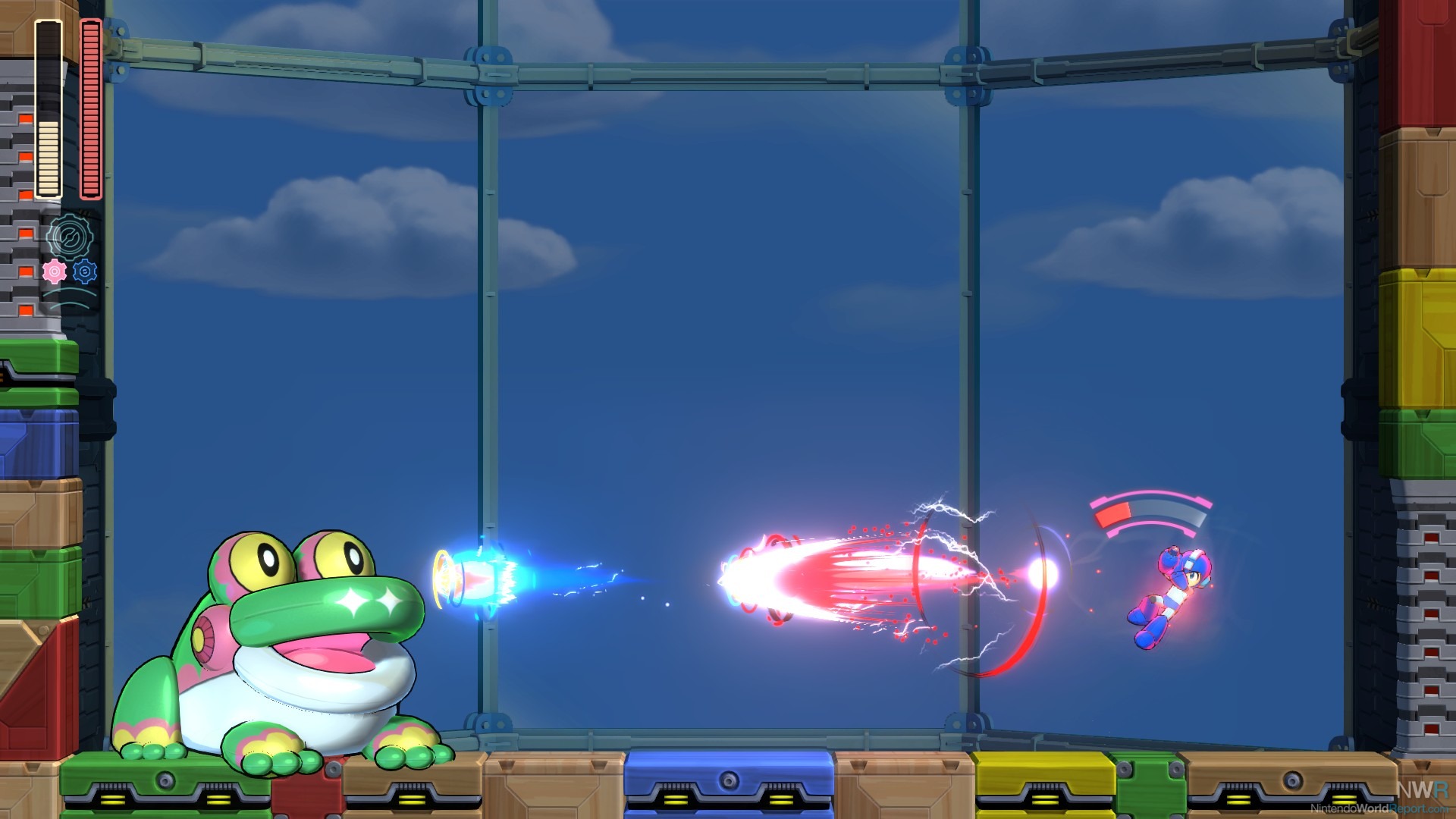 Adding to the replayability of Mega Man 11 are Challenges with online leaderboards and a list of in-game achievements called “Records.” Nine types of challenges are available ranging from the simple Time Attack, where you complete a stage as quickly as possible, to Balloon Rush, where you must hit all the blue balloons and avoid the red ones while progressing through a stage. One of the more interesting and difficult challenges is called Dr. Light’s Trial, and here you fight your way through 30 deadly screens to see how far you can get. In total, there are 50 achievements to earn, some as simple as purchasing five parts from the in-game shop, others as demanding as completing the game on Normal or harder in under 60 minutes. Frustratingly, many of the achievements are hidden, so you can’t always know what the game wants you to do to unlock them.

Mega Man 11 is a fun and challenging game, but it’s a departure for the classic series of games. Mega Man 7 and 8 were different, too, and fans and critics mostly resisted the changes to the formula brought by those two games. Mega Man 9 and 10 returned to the 8-bit style and for that reason, along with awesome soundtracks and traditional gameplay, they found success. This latest game in the franchise may have been better off as a separate series, like the Mega Man X or Zero games, because heavy is the head that wears the crown; few game series reach an 11th entry, and by then expectations and nostalgia have been built up across decades. The Final Fantasy series continues to struggle with this issue, with each new game carrying the weight of previous titles.

I could type out some string of greater than, less than, and equal signs to give you an idea of where Mega Man 11 ranks for me, but everyone’s experience with the series is different, and these experiences will colour and shape their feelings about 11. One specific comparison that stuck with me is that the stages are significantly longer, but I also found some of them more memorable and engaging than ones from previous Mega Man games. With Mega Man 11, Capcom is catering to new players and hardened veterans, and satisfies both to a degree, but it will likely disappoint some players, too. It might not be the Mega Man game we need, but on October 2 it will be the one we get.

Eep... I still haven't beaten Mega Man 10, because it seemed like a step down from (the truly excellent) Mega Man 9.

This sounds like a solid addition to the series though. Nice to see the Blue Bomber live on!

I'd argue it's less that the composition is weak in that it's the instrumentation and other noise pollution int he form of ambient noises, the voice clips, and some other things that muddle things and make it hard to latch onto the compositions. Many folks who work with famitracker have made efforts to cover block man and fuse man's stages in that classic 2A03 chip style.


I actually got worried when you mentioned the bosses "talking too much" because I was thinking we were in for some Mega Man Powered Up style dialogue or Mega Man X5 style Alia breaking up the action, but that would also be a curious thing to exclude from the demo. still, I'm loving it so far, even if I can see a couple of spots where the design gets questionable.