I’m not out to throw this in a volcano, but if I did the Gods might be too bored to continue their rampage.

I’ll be blunt: I didn’t finish God Wars: The Complete Legend, and I likely never will. This despite being in the final chapter and clocking about 30 hours. It’s not a question of “can’t,” investing more time in the game assures me an eventual victory. I just don’t want to, and it’s a shame. I generally enjoy these kind of tactical games, but despite being structured like a Tactics Ogre or Final Fantasy Tactics game, God Wars just failed to capture my attention. God Wars is mechanically sound but just not compelling.

If you’ve played games like Final Fantasy Tactics, God Wars will feel immediately familiar. You collect party members, guide their progression, and equip their gear before setting them on a grid-based battlefield against an untold number of enemies.

The battles aren’t engaging in the way I would have hoped. The large stages are usually stocked with 15 - 20 enemies, and the overwhelming majority of the stages have the objective of “Defeat all enemies.” 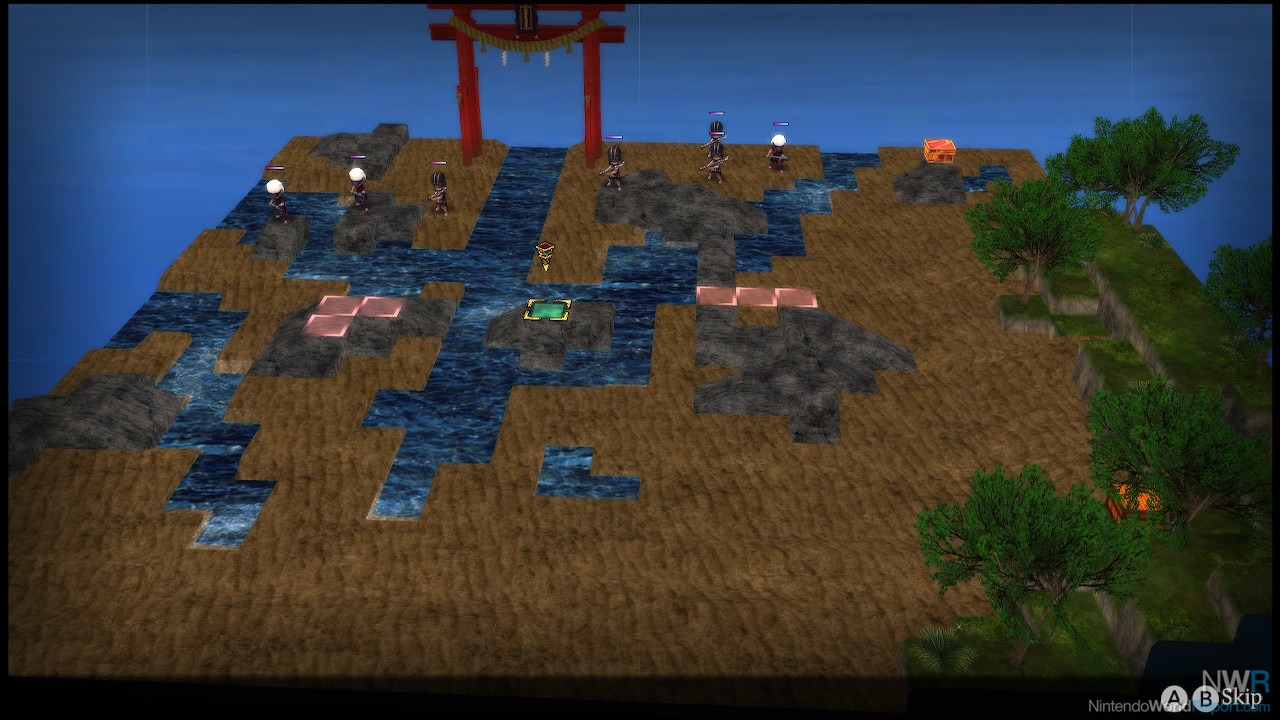 Look at how stupidly big this stage it.

Your comparably small, usually six, unit team has to move across the battlefield, slowly, to defeat each of the enemies. Even fast characters don’t move more than six spaces in a turn when traveling over even ground, but most stages are mountainous slowing you even further. Other quirks in God Wars also slow the game: enemies tend to evade attacks at rates that seem far higher than one the game predicts, all character start the battle with 0 MP - meaning many turns spent waiting for it to generate, enemies can chain status effects that make it impossible for much of the party to move for multiple turns, and enemies high HP/low damage take mean they often take 2 - 3 turns to kill. This game desperately needs to move faster, even after turning off all animations and turning up the speed, battles still feel like they drag on. It’s not uncommon for a dozen or more turns that amount to nothing more than walking to enemies or waiting for enemies to walk to you.

That is exacerbated by the second issue with the battles: waiting for the enemy to come to you one at at time is almost always the correct answer. Many stage layouts allow the enemies to hit you while they are unreachable. Trying to run to them usually results in a frustrating combination of debilitating status effects and a half-dozen turns of withering fire. The easiest way to handle these stages is to advance just far enough to draw out one or two enemies, kill them, then advance. The AI never really accounts for this tactic, and in missions it seems like the only really effective way to proceed without blowing your entire supply of revival items. The only times where aggression is required are escort missions, which provide a different kind of tedium: AI controlled allies who run headlong into death. Thankfully, you can revive any dead character within five turns, but their recklessness usually means it’s better to let them die and then wait till turn five to revive them. 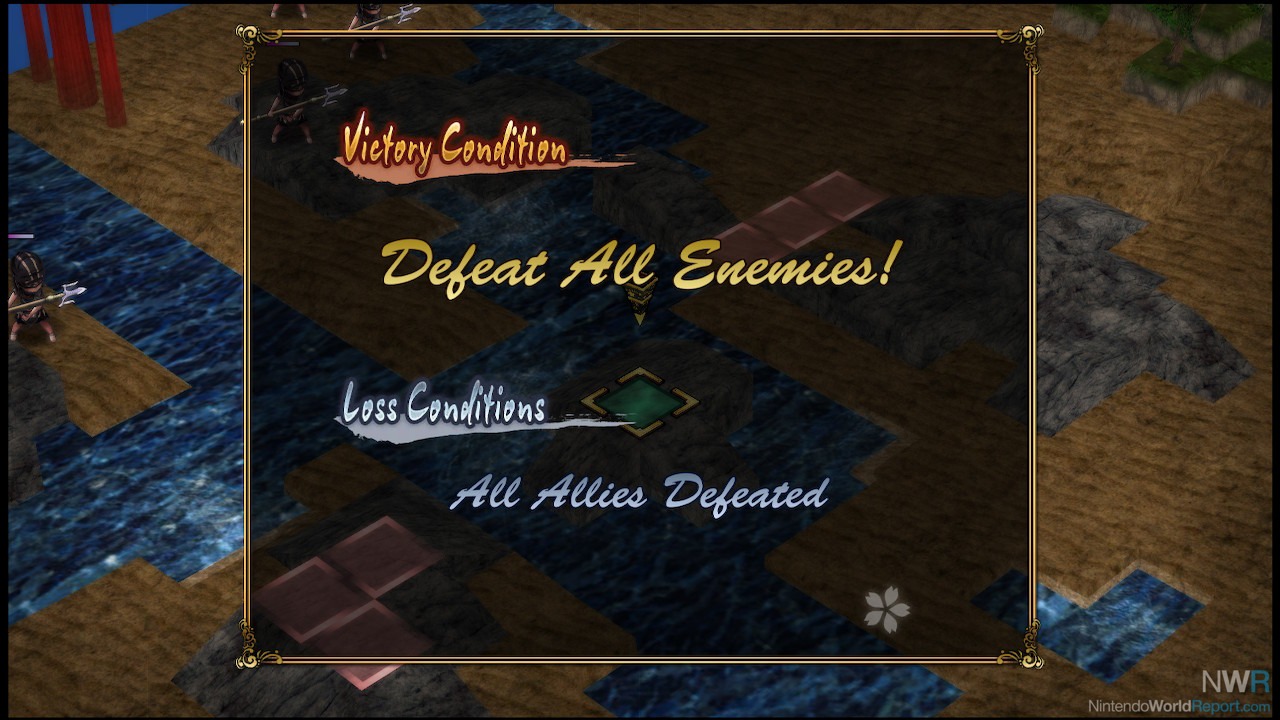 Please, literally any other objective.

If the battles had some more variety in objective, I would argue “kill all enemies” stages should be the exception, and they moved faster, the combat would be fairly enjoyable. There are a ton of classes and skills available and this format is a proven winner. It just takes too long to do anything, and saps my will to keep going. Missions that ask you to take out bosses fare better, but they’re often placed in such a way that elimination of all the enemies is a prerequisite to reach them. If the stages were more open, you could in theory find ways to get to them while bypassing danger.

The other main thing you do is develop your characters. Throughout the story, new party members are continually added, ranging from woodmen to priestesses, princes to gods. Each character has a distinct class, as well as two selectable classes. Each class has its own skill tree, and points to develop it are earned by actions in battle. By not tying experience to outcome (did you hit the enemy, did they die, etc) it is fairly easy to get characters up to speed. However, every skill earned from the class skill tree is lost once a new class is selected. This makes the process of changing classes unnecessarily painful, taking away useful skills while the new class is being advanced. If the game were to let you keep only the skills you had mastered, this would be a fair trade - otherwise all that progress is completely lost. 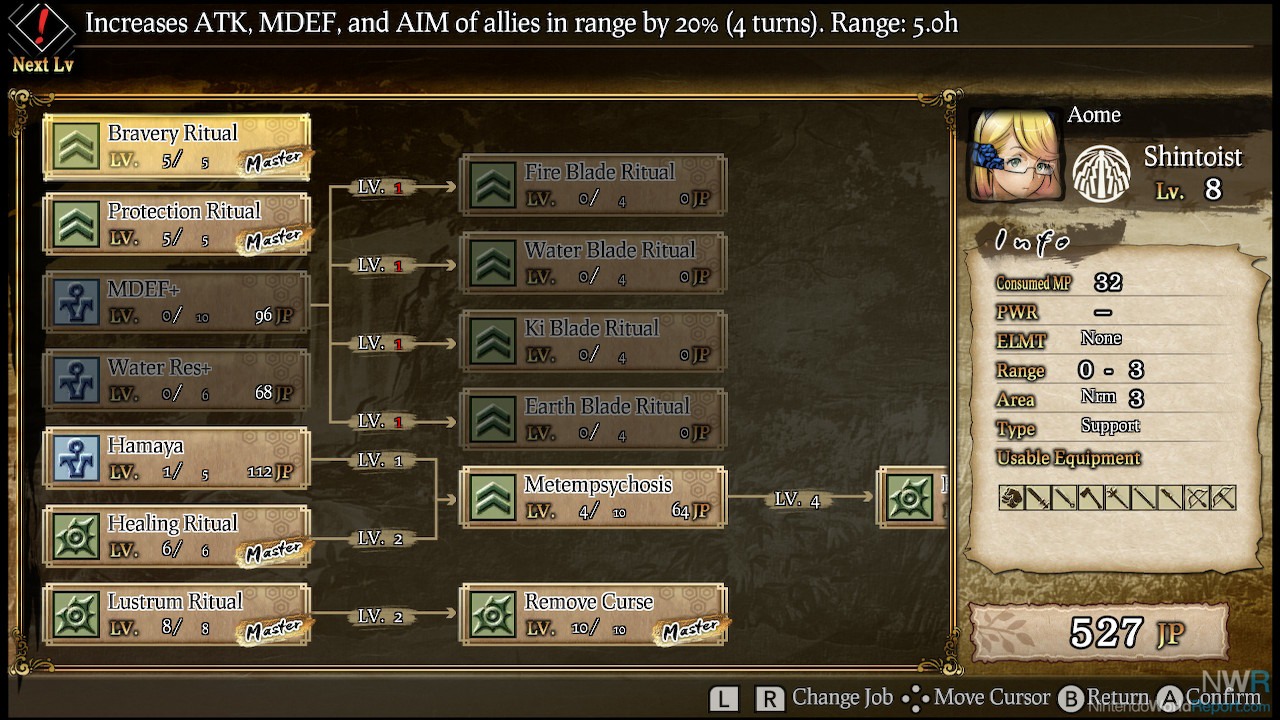 Aome is going to up everyone's AIM, because they're blind.

Passive skills, such as increased health or accuracy, stick around, giving some flexibility in building characters. However, I found success with three basic formats: pure offensive magic user, healing/offensive magic user hybrid, and pure physical attacker. It would be good if the game helped create good builds. It does attempt to tutorialize this by adding new characters with unique class combinations but the highly-specialized late classes seem to push homogenization into one of of those roles. It got to the point where I had my six characters and effectively ignored everyone else.

The best gear can be automatically equipped for character’s roles, and this is a huge time saver when you’re equipping a dozen characters. However, I noticed that story-critical superpowered weapons were ignored by the auto-equip option. Not a big deal, considering how much it helps overall, but a weird omission. 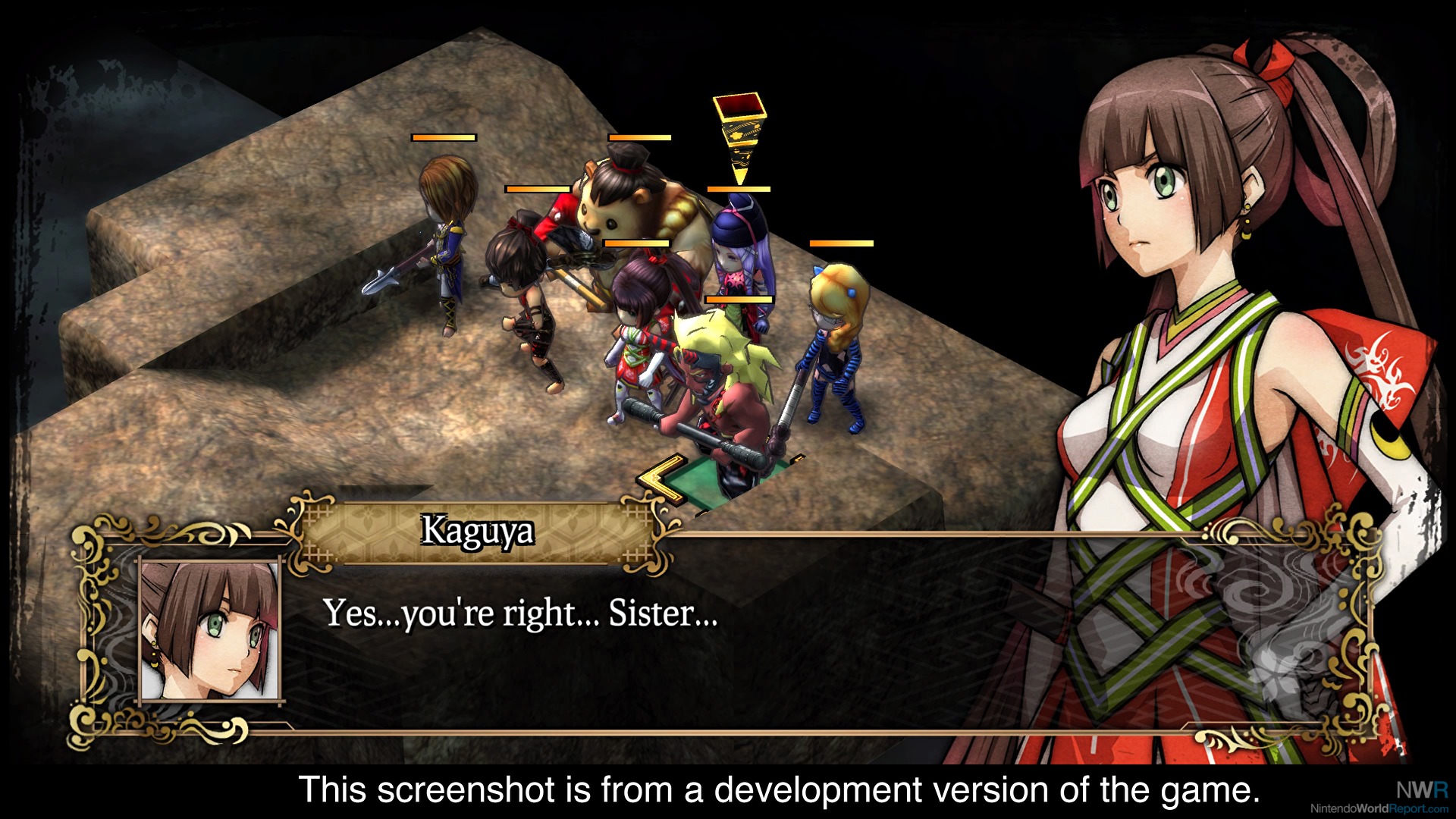 The art isn't bad, but the battles look very primitive.

God Wars is not a looker. Originally released on PlayStation Vita, the visuals don’t seem to have received much of an upgrade in the port to Switch. Simple character models and stage geometry are workable, but don’t show off the unique character designs. The character profile art isn’t especially attractive, but that’s more of a stylistic complaint. Some of the mythological characters are fun, and the costumes of each character are colorful and distinct. The game’s 3D map requires constantly rotating the camera to see where things are, something that would be easily avoided by tilting the camera to a more overhead view. That camera management is totally manual, and is not available during enemy turns, meaning you can actually be unable to see some enemy actions just because of the camera.

The audio needs some refinement as well. Some of the music is pretty good, but all of it repeats ad nauseam. The sound effects don’t add anything, to the point that I turned them way down in the mix. The voice work is provided by veteran actors, but some delivery is pretty weak. In battle, their grunts are tuned way too loud, and had to be slid way down. That said, the inclusion of a volume mixer was greatly appreciated. 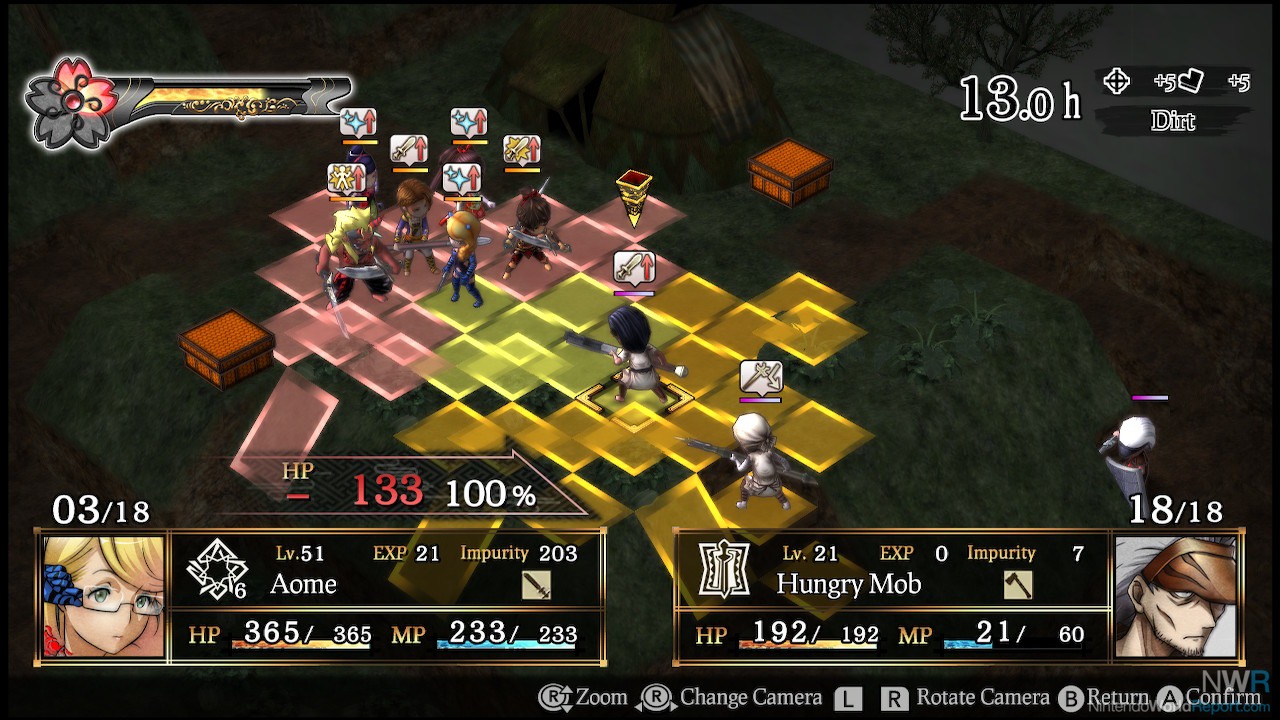 This encounter may take a week to resolve.

The story lacks any real hook. Despite being set in the colorful mythology of ancient Japan, it doesn’t seem to do much with it. It tells a fairly standard JRPG story, just using Japanese proper nouns. Our hero, Kaguya, is looking for her mother, who imprisoned Kaguya a decade ago as a literal “Break Glass in Case of Emergency” volcanic sacrifice to appease the gods. I struggle to find myself motivated to see where her story is going. In the few moments where I’m actually interested in the next story beat, the game has a habit of inserting a twist that delays the beat’s resolution. At least twice we nearly get to see the fate of Kaguya’s sister, only for the game to shunt us away for “story” reasons. Most of the stops on the map don’t contribute major beats to the plot, making the experience feel bloated. Arguably, the same is true for the cast - there are too many characters and many end up fading into the background. If I’m hanging out with a literal god I want to know everything there is to know about them not just ask them a question every third chapter.

It might seem as if I’ve been really negative about God Wars: The Complete Legend, but I’m not. I’m apathetic. This is a totally functional tactical RPG, on a system whose portable mode provides a good home. However, it fails to provide the hooks a game of this length absolutely demands. If the plot was more compact, and delivered more compelling story beats, the slow battles would be more tolerable. If the battles presented unique challenges and were more expediently resolved then the story could afford to be less engaging. The fact of the matter is neither is compelling nor are they offensively poor. Despite logging dozens of hours, I don’t care about these characters nor do I feel like the battles have changed dramatically in a very long time. A fan of this genre would get some fun out of God Wars, and I would be lying if I said I didn’t, but the fun to tedium ratio is just far too low. Instead, take a look at better examples of the genre, such as the two Disgaea games already on Switch.