Who knew that breathing and blinking could be so challenging...

You may have played some weird games before, maybe even some with strange physics, but I’m not sure anything could prepare you for Manual Samuel. It seems that this wealthy douchebag in life has come to the afterlife with an abundance of Hell’s currency, which catches the attention of Death, who is apparently a gnarly skater dude. In order to earn a chance to go back to the land of the living, Samuel makes a deal to try to survive 24 hours with an impediment of Death’s choosing, putting his precious shreds of life on the line. Of course he didn’t anticipate that Death would have a nasty one in mind, Samuel would need to live his live quite literally in a manual fashion, and that’s where you come in. 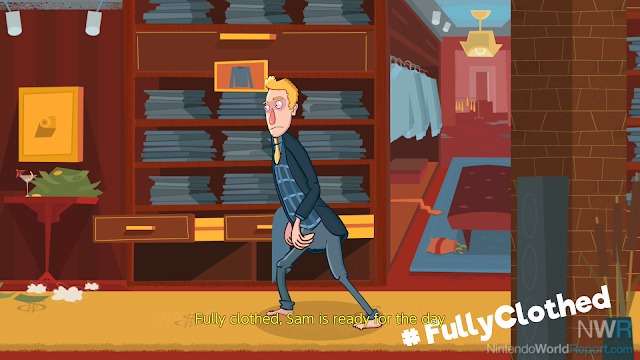 Being clear, you’ll either be amused by the very funky control challenges this game presents you for performing the most mundane of tasks (including breathing, I kid you not) or you’ll want to curse whatever horrible people put it out on the eShop. This takes the normal physics game model and really pushes the limits. Trying to coordinate a variety of button presses, taps of the joystick, and moving between shoulder buttons absolutely gets confusing, but it’s also a kind of silly fun if you’re open to the experience.

What story there is over the handful of hours you’ll play tends to be odd as well, but the strange characters and the ever-present narrator commentating on what you’re doing (complete with celebratory hashtags for mundane achievements like taking a leak) do a good job of rewarding your continued efforts. If you can see the amusement of nearly killing yourself while simply trying to drink some water or narrowly avoiding running over little old ladies while struggling to control your car (of course complete with a manual transmission) the experience has its silly rewards. 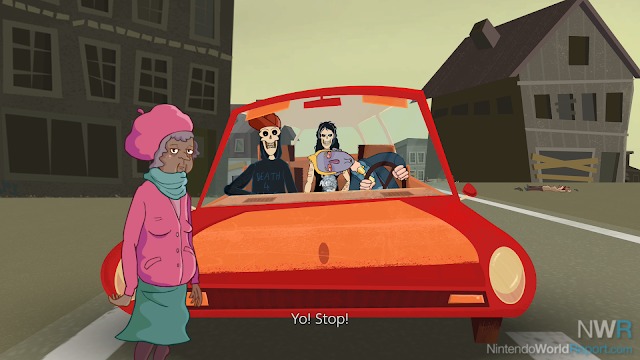 Given the likely polarizing nature of the game’s controls, Manual Samuel gets a highly conditional recommendation. If you’re willing to roll with the punches, there’s definitely a unique good time to be had here, just be very aware of its intent to make controlling just about anything more challenging than you’d ever imagine.