Princess Solange teams up with friend and foe alike in this accessible indie fighter.

Cast your mind back to E3 of 2017—Nicalis announced a 2D fighting game called Blade Strangers, which featured characters from Code of Princess and Umihara Kawase (which we know as Yumi’s Odd Odyssey). More news was slow to come, and it wouldn’t be until after E3 2018 that I’d know significantly more about Blade Strangers. A lot of that knowledge came from our interview with director Toshinobo Kondo (LINK). More characters were announced, including a raft of indie characters, and I was genuinely excited to play this game. What I found was a fun, accessible fighting game that straddles the line between something like Super Smash Bros. and an SNK fighter. 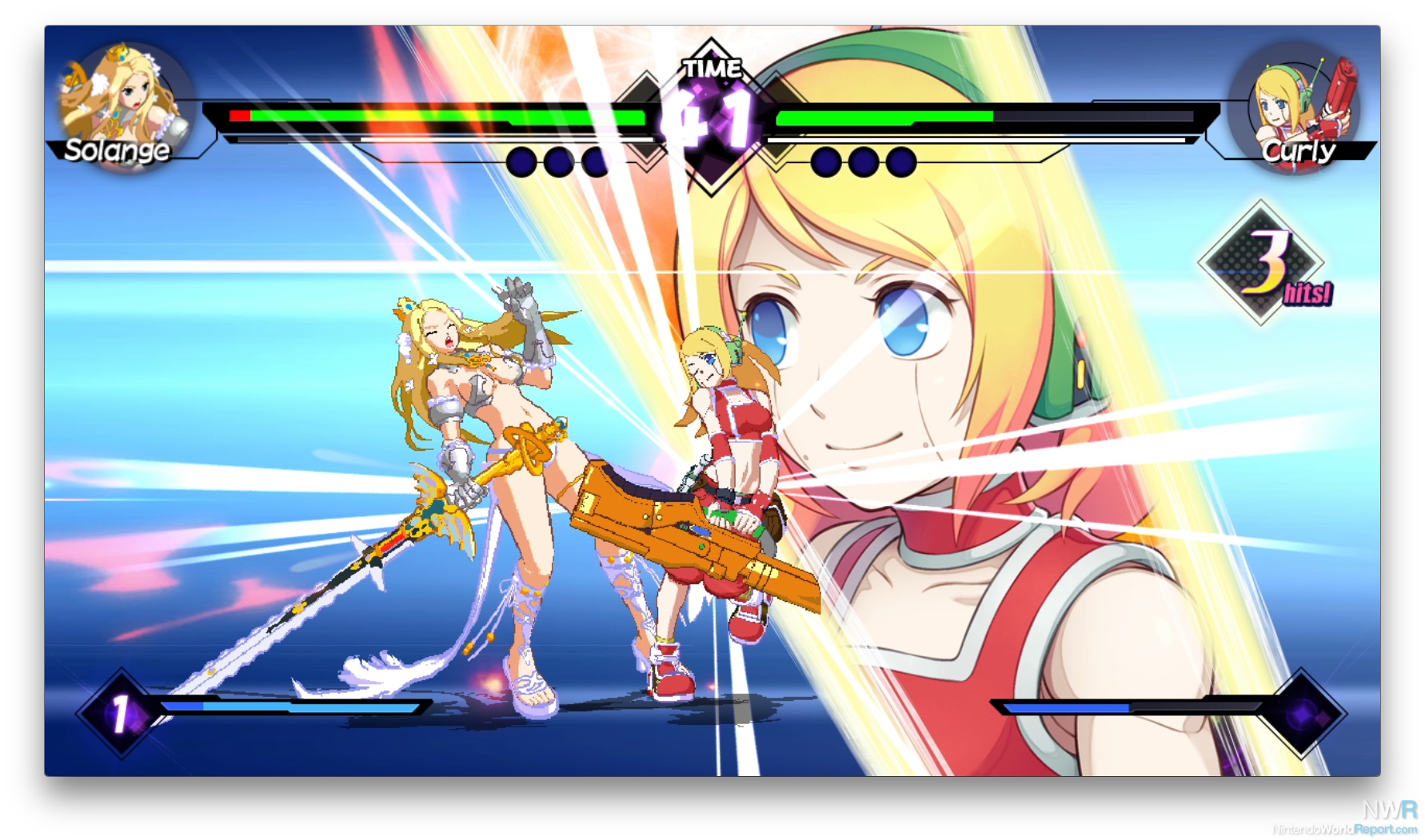 I say that because of the control scheme. Rather than forcing you to memorize a number of complex directional inputs and buttons, Blade Strangers simplifies things to a single direction combined with one or more buttons. It’s more like Smash that way, and while each character has unique attacks, they all control more or less the same, which is a refreshing change for a more traditional 2D fighter. Your options are Light, Heavy, Skill, and Unique attacks (one for each of the ABXY buttons). Pressing Unique and another attack button can result in a new or powered-up attack at the cost of draining your super bar. As you land hits, your super bar charges to three levels. Pressing the Heavy, Skill, and Unique buttons at the same time and a direction will result in a super attack that drains one bar. Press it twice in rapid succession to drain two bars for an elongated attack. The controls are fully customizable and you can even assign multi-button attacks to shoudler buttons.

The learning curve is slight—things clicked with me pretty quickly once I realized I wasn’t playing Street Fighter V or Skullgirls. Some characters play with the standard pattern. Gunvolt, for instance, has to power up his own super bar while Quote and Curly Brace’ super attacks are less theatrical and more based on ammo type. Blade Strangers is all about the characters. This is essentially Indie Fighter 2018:

· Cave Story has Curly Brace and Quote, who play similarly.

· There are two original characters, Lina, the final boss, and Helen, an Athenian warrior.

· Finally, the indie scene is represented by Isaac, Shovel Knight, and Gunvolt from their self-titled games.

They’re all wonderful to play as, although Isaac seems undercooked and Gunvolt is pretty technical. My favorite might be Emiko & Shakemaru, who must be a play on Waku Waku 7’s Mauru & Mugi. Their victory animation is too adorable for words. You’ll unlock five of these characters by playing through Story mode with everybody, which doesn’t take very long.

In fact, my biggest beef with Blade Strangers is that single-player content is pretty limited. Story Mode is fun for the humorous character dialogue before and after fights, but the overall narrative doesn’t really change (only Lina gets her own totally unique tale). Challenge Mode is not Soul Calibur’s “Mission Mode,” which is disappointing. Instead, it just tries to teach you several combos per character in a sort of remixed Training Mode. The Arcade and Survival Modes are exactly what they sound like. Thus, Blade Strangers is going to live or die based on its online performance—which is why I haven’t scored it yet. 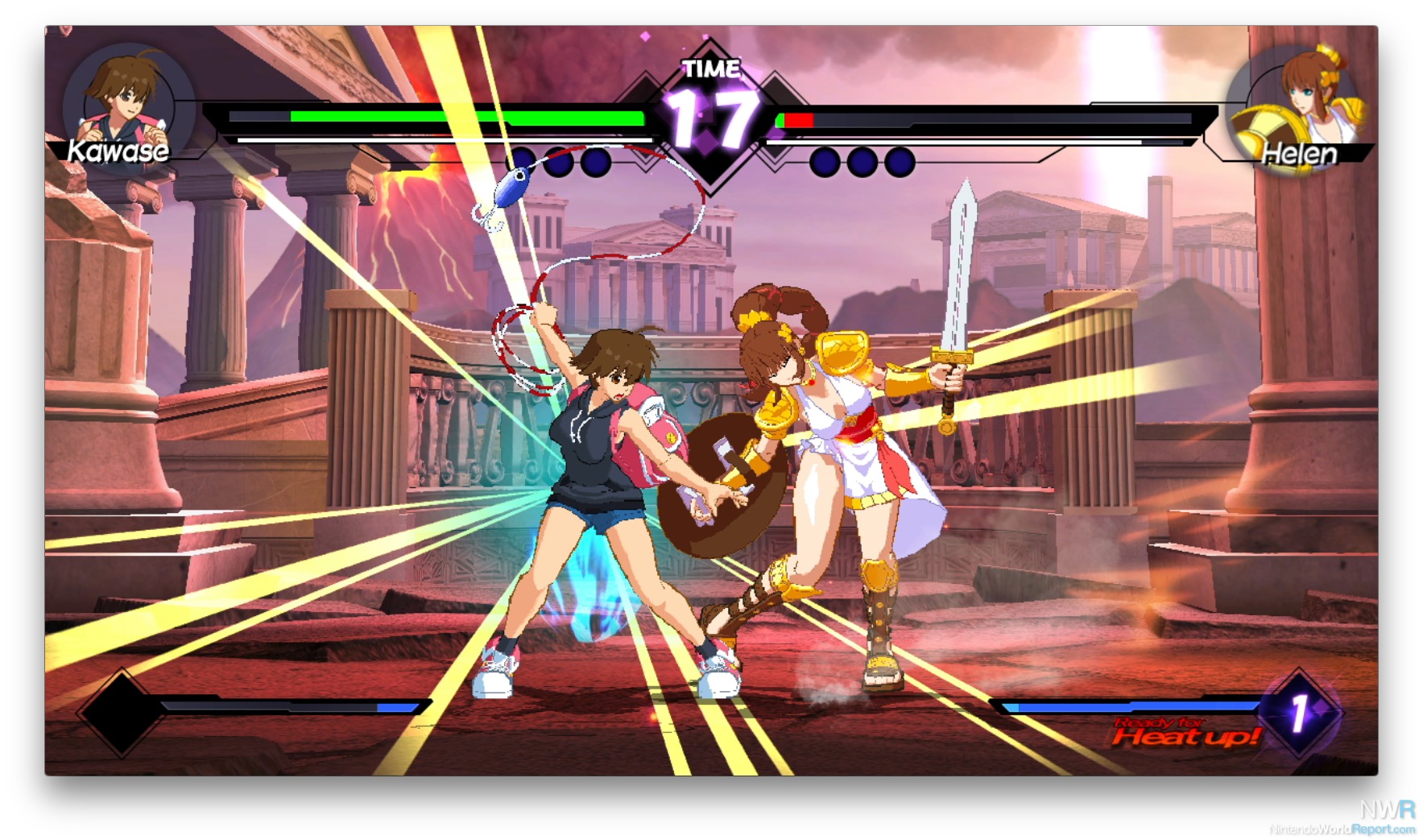 The game looks great. The character models are very detailed and animations are lovely. It’s very strange seeing Quote and Curly Brace as anything other than squarish, big-headed pixel characters, but here we are. For the most part, everybody has a good range of character-specific attacks. For example, Shovel Knight uses the War Horn, Isaac can toss bombs and troll bombs, Gunvolt can repeatedly “tag” enemies with his blaster, and Quote has the big white sword that he got from King. I kind of wish there was a way to view animation frames on their own in some kind of gallery mode because they really are pretty but it’s hard to appreciate them during a fast-paced match. Blade Strangers has voice acting, but it’s in Japanese; there doesn’t seem to be an option to switch to an English dub or turn on subtitles, which is a little disappointing. The characters say things before each match begins--I’d like to know what!

This is a fun, accessible fighter that casuals can jump into that also has depth that more seasoned fighting fans will appreciate. It’s definitely worth checking out.

Does she kick high?

Little inside baseball on this.

The score is still pending because literally the day Blade Strangers came out and the servers went up, I was admitted to the hospital--not with a brain abscess this time--just a normal respiratory infection. Anyway, the WiFi at Providence is terrible. Neal sent me another game to review (involving an all-female cast) and it took TWO AND A HALF HOURS to download.

So yeah, the WiFi is not up to the task of online play. However, I did have my PHONE, so maybe I can TETHER, right? MY PHONE DIED ON DAY #2. Like, forever. I need a new phone. So next time my wife comes in (due to work, her presence has been spotty), I'll try tethering to HER phone and playing online.

Re: kicking high, Solange doesn't, but Helen does. :-D

Geez! wishing you a speedy recovery!