You may not want to push all your chips in on this one.

The idea of crossing a traditional card game with one of the most iconic fighting games of all time is one worth salivating over, but outside of the presentation Super Blackjack Battle II Turbo Edition - The Card Warriors does little more to pay homage. The visuals look great and the music is downright incredible, but with features like online play absent, it makes the already paperthin gameplay feel even more pronounced. That being said it’s a good representation of blackjack, but with fake chips on the line and at times poor AI opponents, it just doesn’t capture the suspense nor thrill of the real thing. 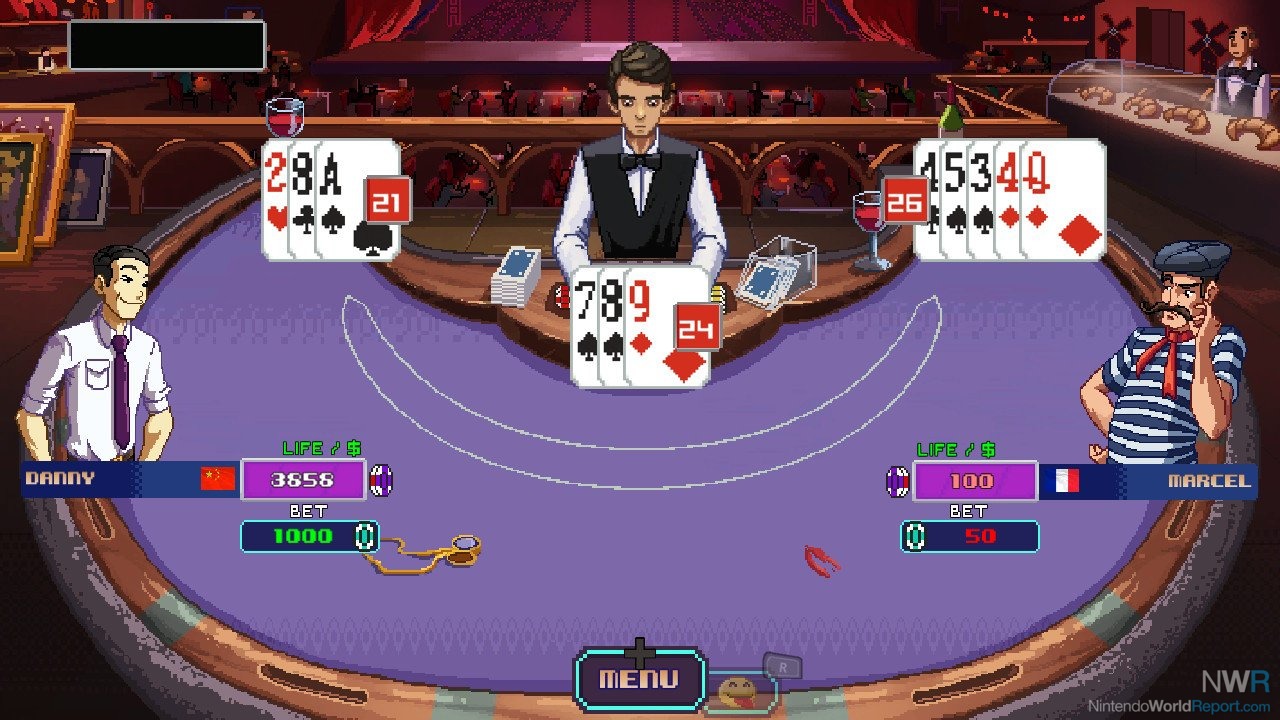 When push comes to shove Super Blackjack Battle II is a standard take on the traditional card game. Each player at the table plays their hand against the dealer trying to get as close to 21 as possible without going over, while trying to stack as many chips as possible. There are three game modes to choose from, Single Player Combat, Simply Blackjack, and Party Mode. Single Player Combat mode relies on trying to recreate the Street Fighter feel by introducing a number of characters from different areas of the world. Each player travels a unique path along the map in an attempt to defeat each opponent in a 10 round battle of blackjack. Winning is achieved by having more money than the other player when the 10 rounds have concluded or if your opponent loses all their money before that point. Conversely losing all your chips or having less at the end will result in a defeat and gameover, but with unlimited continues it is never too punishing. 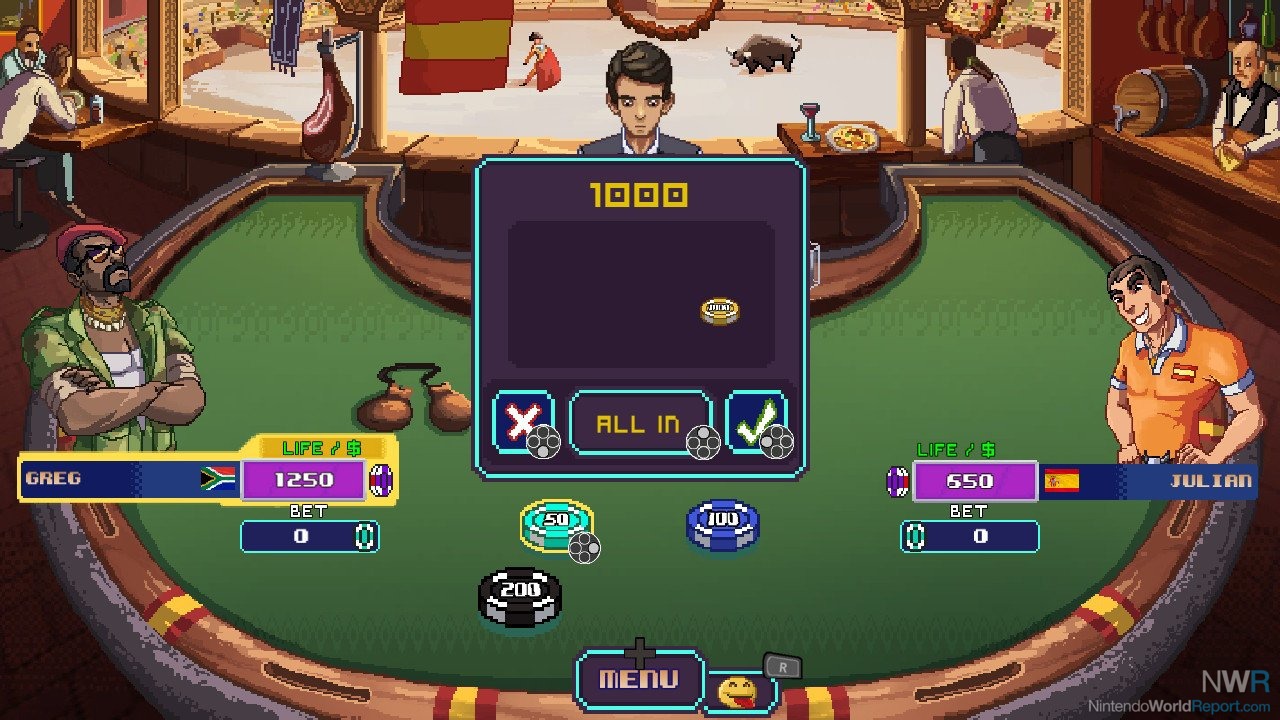 Party Mode is the local multiplayer option that allows up to four people to play. It plays almost identically to Combat Mode, but instead of playing against a single computer opponent, you’ll play against up to three friends with any remaining spots being filled by computers. Simply Blackjack is exactly what it implies, an endless string of hands against the dealer. The problem with playing against AI opponents is that they aren’t always making the best decisions; there was an instance where they held on 11, which is downright foolish. Making calls this poor isn’t the norm, but overall it leaves much to be desired in terms of AI difficulty. An avenue of relief could have come in the form of online play, making it easier to hook up with friends for some cards action, but sadly multiplayer is limited to local. 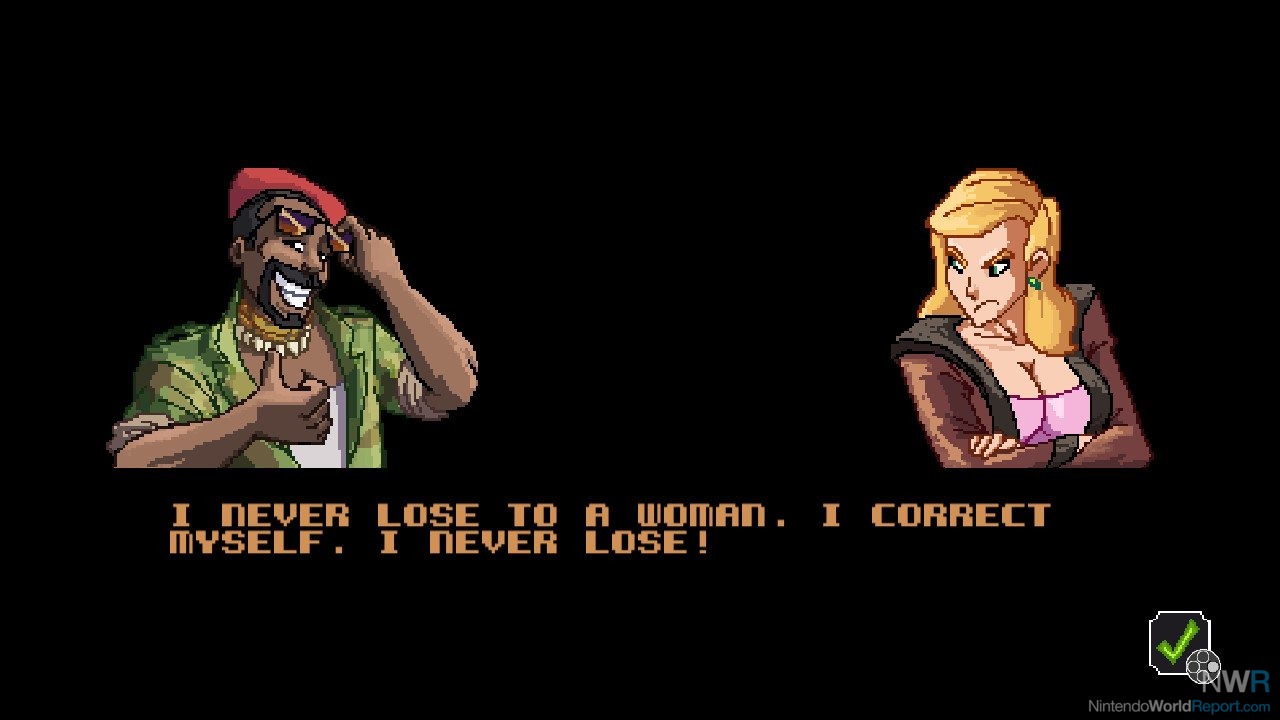 Arguably one of the highlights of Combat Mode are the storylines for each player. In between battles and after defeating all foes there are dialogue bits and interaction between characters, but usually the attempt at humor fell flat and I found myself just rushing through them. While I wasn’t personally offended by any of the jokes, some certainly toe that line and could ruffle a few feathers depending on the person. Despite that, the visuals look fantastic especially the many different casino locations. Even more impressive is the soundtrack. Each of the 12 tables has its own look and specific soundtrack, which always got my head bobbing. It was nice to see each location have its own personal look and sound, making bouncing between tables a joy.

Blackjack is a timeless classic, but when it comes to its virtual representation, it generally doesn’t offer enough to keep things interesting with nothing on the line. I thought Super Blackjack Battle II Turbo Edition - The Card Warriors had the potential to spice things up to add longevity, but sadly it failed to do so. With poor AI and no online play, the only truly redeeming factor are the visuals and superb soundtrack. However that just isn’t enough to keep your attention for more than a few hands.