I bought the GBA version of Dreamcast cult-hit Chu Chu Rocket on a whim. In it, players place arrows on a grid to guide mice into mouse holes and away from pursuing cats. I was obsessed. When the Android version mysteriously disappeared from my library, I went searching. It was then I first met BlobCat on mobile.

BlobCat balances unique and homage by adding a new mechanic to each of its six worlds. The desert has minecarts on rails, the forest has swinging signposts, and space has buttons locking doors. The dice mice even get themed costumes. These mechanics help set BlobCat apart from its inspiration. In each level, players can drop a limited number of arrows before watching the level play out. Beat the level with two arrows to spare and you unlock a sticker.

Stickers highlight the best part of BlobCat: the art. Every hand-drawn sticker puts a blob cat or dice mouse in a new situation, like dressed as pirates or businessmen. The characters are cute enough to pillar a cartoon or at least a merchandise empire. On other platforms, players could put stickers on pictures taken with the device, but the Switch is cameraless, so the stickers are just kind of here. 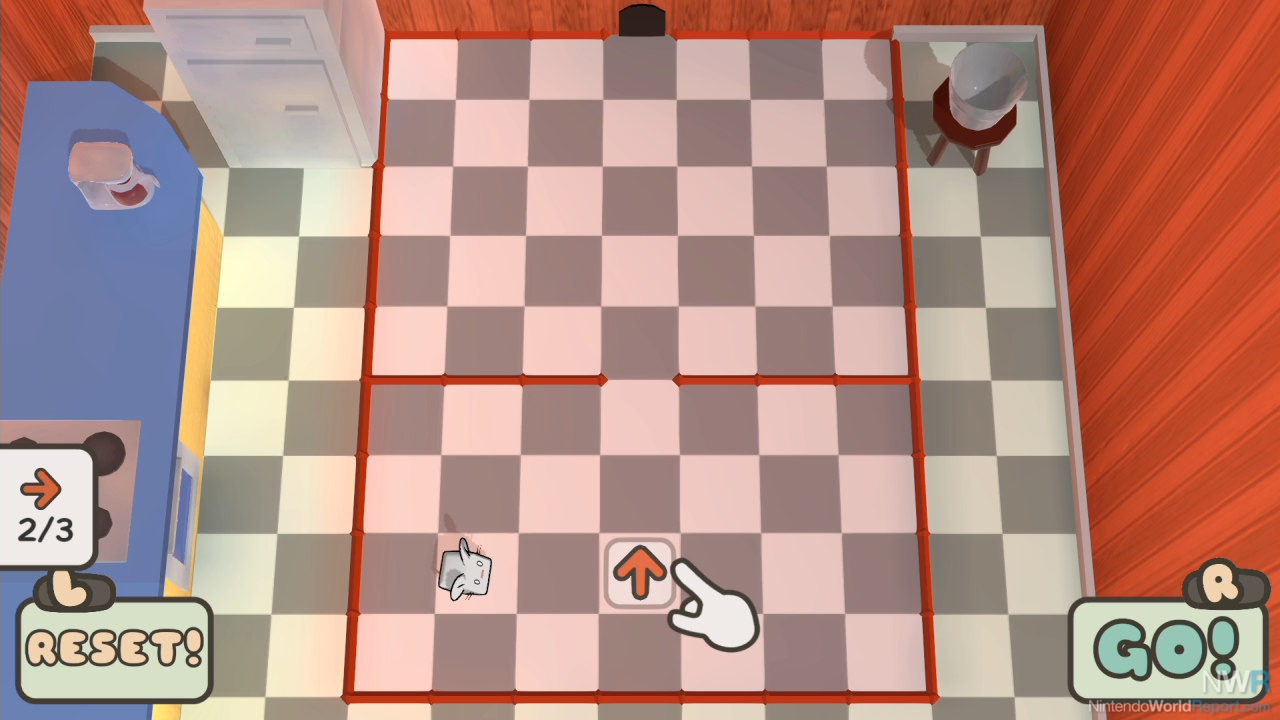 The music is bouncy, Kirhopian, and infinitely relistenable. However, songs are muffled and quiet during the planning part of each level, only blasting in their full-throated glory as the level plays out. Some levels are really short, and other runs are quickly ended by a cat eating a mouse, so the music never gets its time in the spotlight.

I only had trouble hitting three stars on a few levels in the first four worlds, but the fifth Snow world and sixth Halloween world have me stumped. I plowed through levels much more quickly on a big screen in my comfy chair than I did on my phone in a moving train. The upgraded graphics and lighting definitely deserve a full console experience, but the puzzles seemed somehow more fulfilling when played in short bursts on the go.

Cross-play multiplayer is here for some reason. I was hoping for user-created puzzles to pad out my playtime, but instead found a party game in which mice and cats are shot out rapid-fire. The goal is to guide mice into your own hole and cats into your opponents, but everything was a bit too busy for me or my player 2 to get a solid grasp on. I couldn't find an online opponent, even on launch day.

While BlobCat on Switch does capture the essence of Chu Chu Rocket’s cat-and-mouse gameplay, it doesn't do quite enough to replace the original in my heart. It’s worth grabbing for on the go, but I’ll be here hoping the original pops up again.

I loved the GBA ChuChu Rocket due to the tremendous number of puzzles in it.  It's a shame this game doesn't have the same scope.  Like you said, being able to share levels online would be awesome. :(