It’s a horrible day in the neighborhood.

Hello Neighbor is a first-person horror game with puzzles and stealth elements. The main character, a young boy, kicks his ball down the street, and this is where the player takes control. Walking down the street after the ball, the colors and brightness of the environment give a false sense of security. There are no cars or people in sight, and “Simming” signs, a play on “Missing,” hang from the trees you see as you meander, or sprint, down the street. Your ball has stopped in front of a large house where you can hear glass breaking and see the titular Neighbor at the tail end of doing something sinister. The objective is made as clear as it is ever going to be at this point: Investigate what is happening in this house. Unfortunately, that’s much easier said than done.

Moments after regaining “control” of your character, you are likely to be fighting the unchangeable controller setup, which moves the most frequently used actions to the two R and two L buttons, which isn’t horrible on the Pro Controller, but can certainly be uncomfortable in handheld mode. The game is divided into three acts and a brief finale, and runs 5-10 hours in length, but mostly because of its obtuseness and lack of direction. It is possible that much of the time that you spend figuring out where to go and what to do will be interrupted by the evil Neighbor, who upon catching you sends you back to where you began each act. The unique element, that the computer-controlled Neighbor learns your patterns and attempts to thwart your specific style of playing, is a neat trick, but his presence ends up eliciting more annoyance than fear in that the repercussions of him catching you are so minor. You lose no items or progress when he finds you, and I would often purposely seek him out if I wanted to quickly return to the starting area. 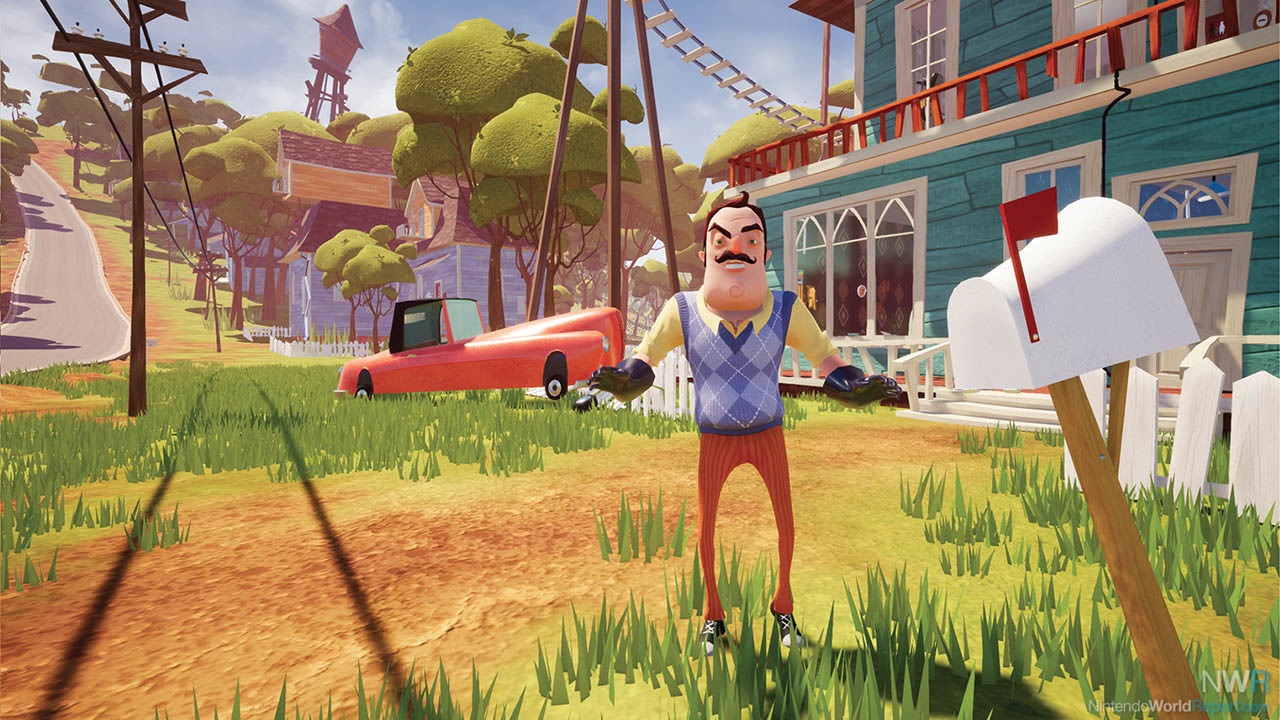 One strength of Hello Neighbor is that there are opportunities to complete each act in different ways, so there is some replay value in finding all of the possible solutions to the three acts. To its detriment, the gameplay and puzzles themselves can be frustrating and broken. For example, a number of situations call for precise movements, jumps, or object placement, but the controls have to be fought with to accomplish any of these. From my actual experience playing the game, while standing beside a breakable window, I threw a vase at the window and rather than shattering it, the vase went clear through the window and into the room, forcing me to retrieve another item for the purpose of breaking the glass. I also used a shovel to uncover a coffin buried in the Neighbor’s backyard, but it wouldn’t open; only by dumb luck (button-mashing anger might be more accurate) did I throw the shovel at the coffin causing some type of physics glitch that made the object inside the coffin obtainable. Even if you do figure out what you need to do and how to do it, the game might not always oblige. 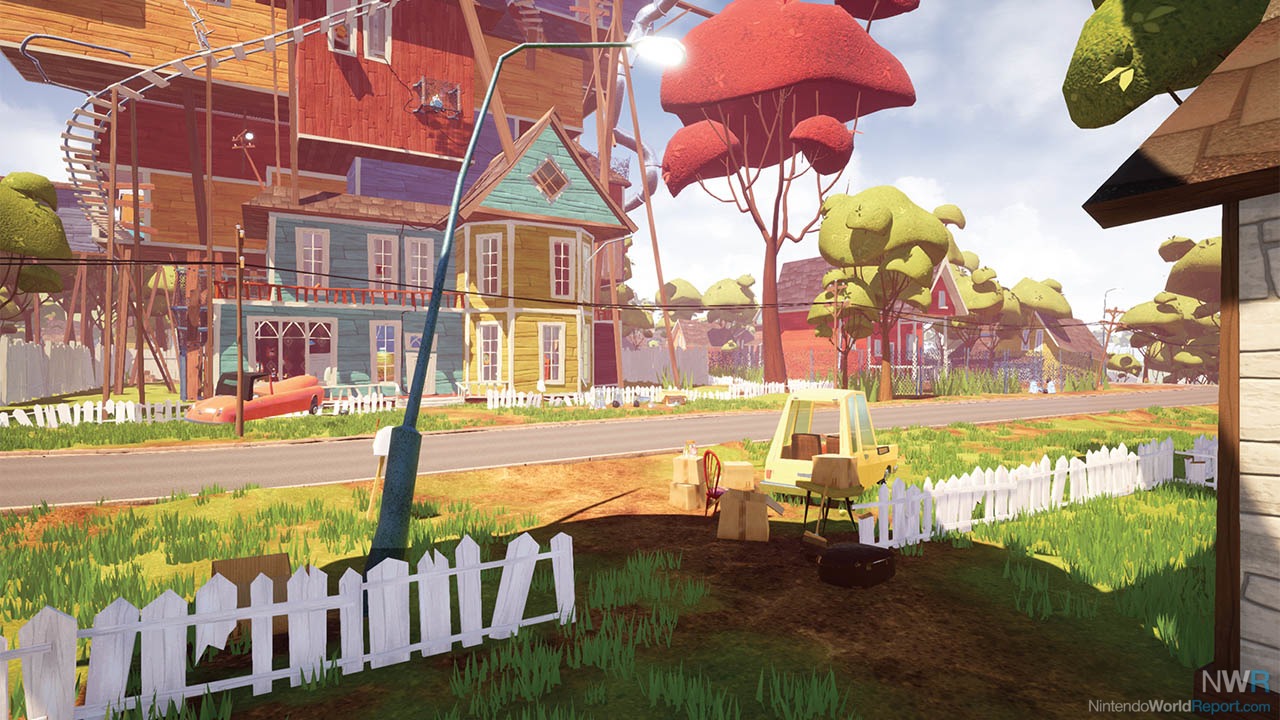 As you progress, the Neighbor’s house grows in size, and this change in environment helps each act feel fresh and different, but the extra space means more possible items to pick up, many of which won’t help you solve the puzzles, and more questions about how to proceed. In terms of the game world, you might look around the neighborhood and think about exploring all the individual houses, but there are only ever two houses at most that you can enter; sandbox this is not. In the somewhat more open point-and-click adventures games of the mid ‘80s and early ‘90s, some puzzles would require you to combine objects and perform actions in unfathomable ways and places, and the specter of those games haunts Hello Neighbor. I am exaggerating a little, but I experienced the same feeling of being lost in the early King’s Quest games as I did here.

For the sake of immersion and sometimes to develop the unease and discomfort that we need to feel fear, horror games can choose to tell us little about how to play them and what we should be trying to do. Sometimes this works. Other times, you end up with Hello Neighbor, a game that can feel like a tech demo or the humble beginnings of a unique and brilliant experiment. There is a story here, told in a fragmented way, and the allusion to the grumpy and mysterious neighbors we all had as kids evokes powerful emotions, perhaps even nostalgia. However, this game is more frustrating than fun, more superfluous than satisfying. The visuals make sense given the genre, but they are still bland and boring to look at. You might be able to derive some enjoyment from this game, but it requires overlooking absolutely essential elements gone awry, making Hello Neighbor very difficult to recommend. If you don’t mind solving abstract puzzles and throwing everything (including the kitchen sink) at your objectives all while constantly avoiding a particularly annoying antagonist, then you might give this game a try.

Please won’t you be my neighbor? I’ll pass.