An immaculate fusion of platformer, roguelike, and Metroidvania.

Mixing and matching ideas from roguelikes, Metroidvanias, and Dark Souls seems like a way to win the gaming buzzword Olympics, but when the balance of all those aspects is so thoughtfully crafted, as is the case with Dead Cells, it doesn’t matter how many marketing boxes a game checks when the end result is so spectacularly good. Motion Twin has struck pure gold with their Switch debut, a sublime side-scrolling action platformer that is filled with creativity, challenge, and a dynamite gameplay loop, making it not just one of the best games on Switch this year, but also one of my personal favorite roguelites of all time.

Dead Cells is played in roguelike runs, where your mysterious hero is reborn with a new body ready to try to escape the dismal island he’s imprisoned on. To start, you only have two weapons, generally a combination of sword, bow, and shield. From there, you must explore the labyrinthine areas, defeating enemies, finding better gear, and searching for the level exit. It’s straightforward at first: just keep going and try to survive.

The stages are all procedurally generated but in a way that makes them still feel familiar each time. They all contain the same types of rooms and rough layouts but often hide distinct secrets and unexpected challenges. For example, the opening of an early level is always the same and features a straightforward linear path that mostly only varies in enemy placement. Underground areas in that level are where it varies in shape and layout, but even those still follow a similar pattern. One will hold a shop, while another holds an area that can only be accessed by a specific unlockable item. 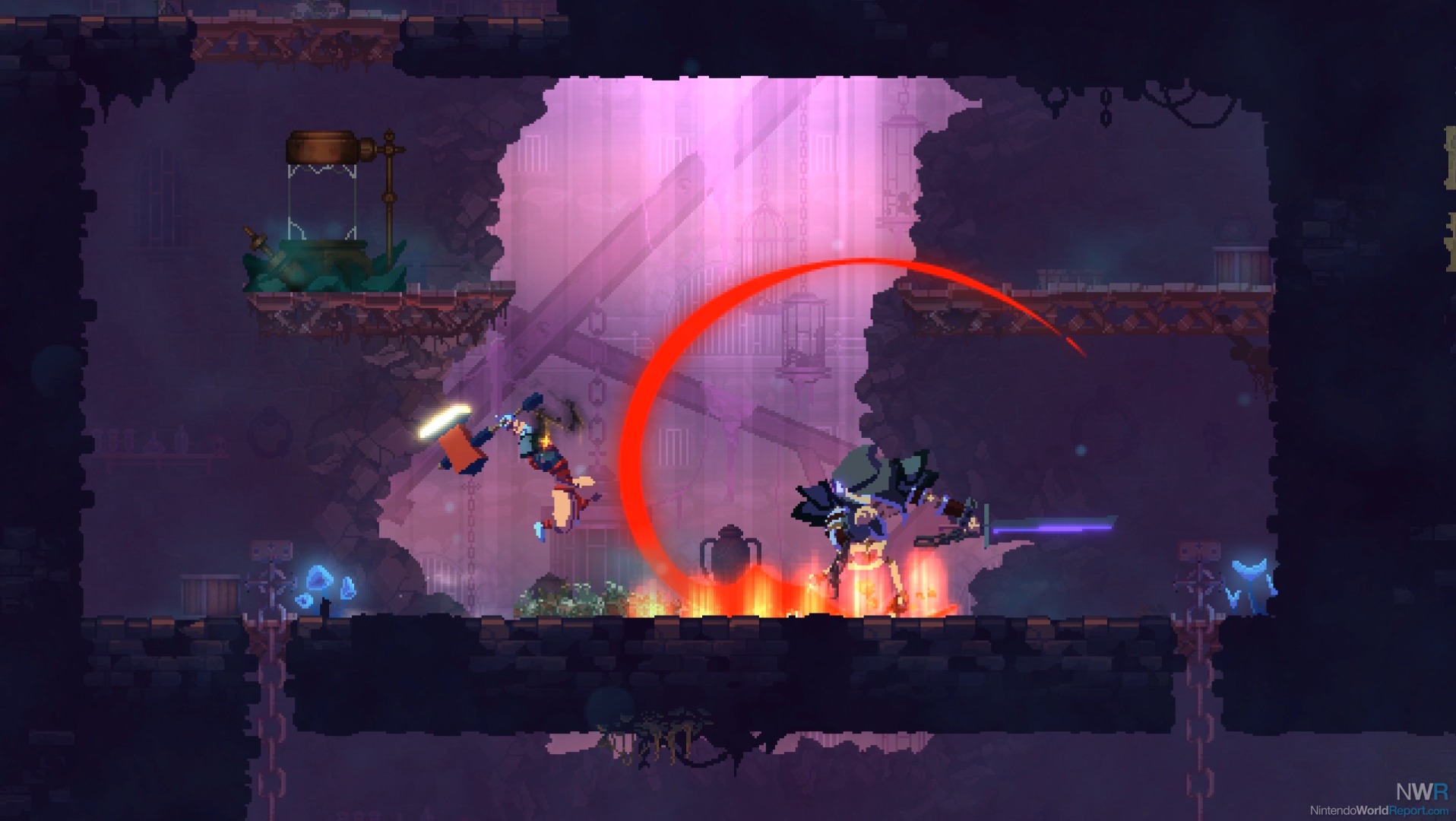 That claws at an aspect of Dead Cells I adore. On one hand, it just follows a similar roguelite design where you play as far as you can before you die and then restart, making use of an accrued currency to upgrade and update your abilities and pool of weapons. On the other, key-like items can be found throughout the world that open up alternate routes throughout almost every single level. For example, after getting the vine rune to grow climbable plants in specific areas, an alternate sewer area can be accessed in the first level. This helps give Dead Cells a firmer narrative gameplay throughline as it’s not just about reaching the end, but reaching the various bosses and mini-bosses to open up the ability to access a wider set of levels and areas. As you progress, almost every single level will have multiple exits to completely different areas.

The levels themselves are visually distinct, usually with a specific hook or style of enemy. The sewers are rife with poisonous enemies while a later level has an entire mechanic of making sure you stay in the light. Because of enemy attack patterns, it’s usually better to stay back and attack from afar. Melee weapons are mostly at a disadvantage here because oftentimes multiple enemies are on the screen and close-range attacks open you up to too much damage. The better route is to make use of the bow for ranged hits and the shield for well-timed parries that can stun enemies. Grenades and traps are also very important and most of my best runs involved having a pair of powerful traps that I would toss at groups of baddies from afar and then watch them get sliced up by arrows and saws. When the going gets busy, I ran into some slowdown and graphical hitches. It was never anything that was majorly detrimental, but it happened often enough that it should be mentioned.

The variety of ways to go about playing Dead Cells is vast and excellent. You could just keep pushing forward to reach the end, or methodically track down the runes to unlock more secrets and find new areas. You could get really good at parrying attacks with a shield and following up with well-timed sword strikes, or you can master the ability of cheesing it from afar with a focus on traps and grenades that inflict burning and poison status effects. Even grinding for the currency to unlock more weapons and upgrades has multiple options, as you could methodically clear out enemies in levels or speed-run through to reach timed gates that offer big rewards. 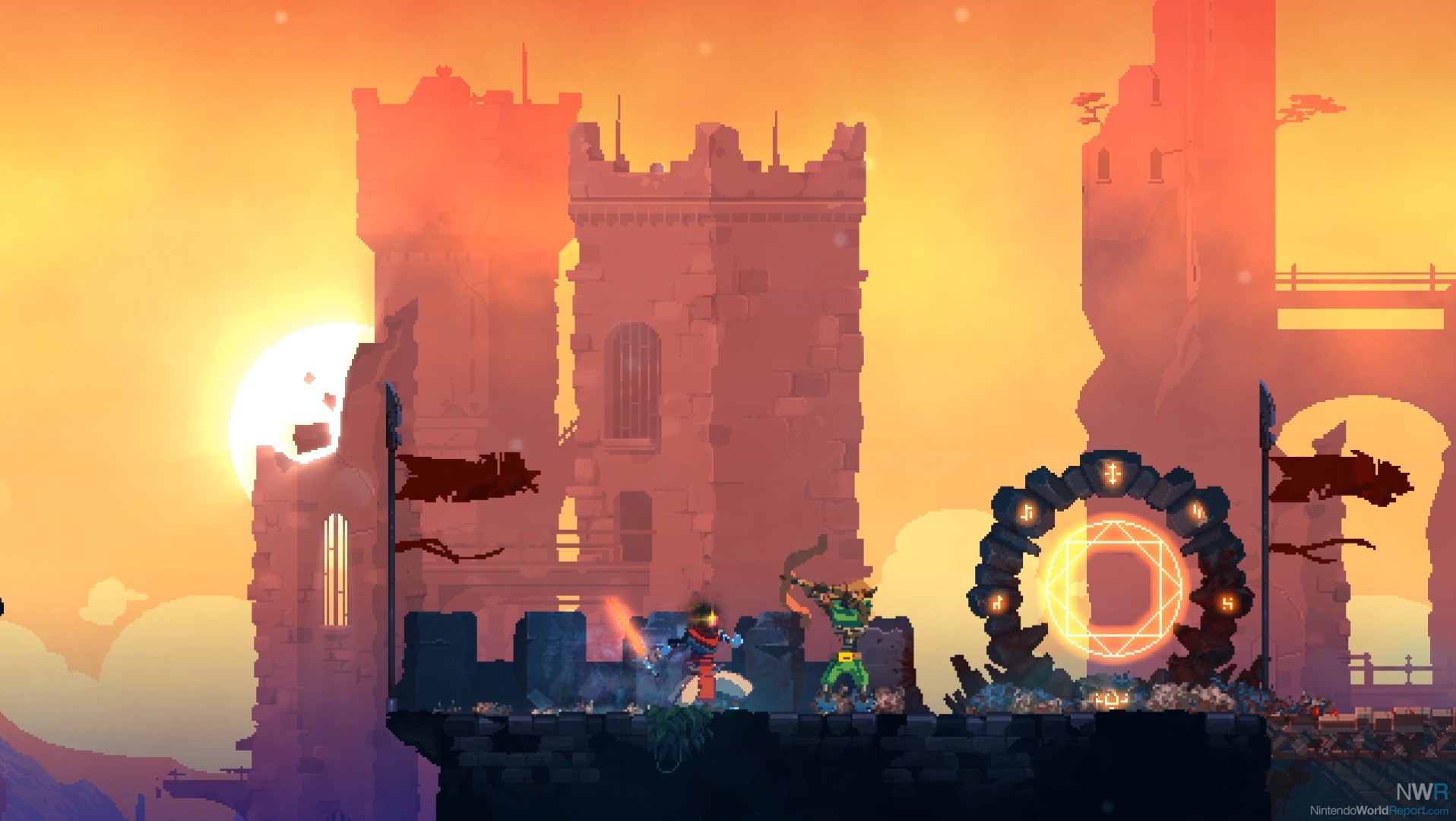 The pool of gear starts small and grows as you find and unlock more blueprints. As you get deeper into the levels, the gear you find will have modifiers, such as a shield that fires an arrow when used or a sword that causes poison damage. It helps make every single run feel distinct and while some loadouts built up during my travails were better than others, I rarely ever felt like I was powerless. Not to say Dead Cells is easy; it very much isn’t. Just that even in its difficulty, it still makes you feel like a bad-ass.

Dead Cells is packed with levels and challenges, though the true length depends on how good you are at surviving. If you do get your teeth kicked in, building up currency can help unlock more health potions, more carry-over gold, and other benefits that can give your regenerating fella a leg up. Building those up can be a grind, but hey, maybe during that grind you will get better at the game, too. A Daily Challenge also unlocks after you beat the first boss, which lets you compete in a more deliberately designed level, generally holding a greater variety of weapons than you have unlocked. I prefer the normal runs, but it’s a nice respite to have yet another alternate way to play.

In the lineage of the indie roguelite revival, Dead Cells might be the new zenith. Not since Spelunky have I been so completely taken by the play and craftsmanship of this style of game. Every run is engrossing and fun and when I die, the only thought rushing through my brain is to start over and try again, pushing as far past my previous run as I can. This is a tremendous newcomer to the Switch indie scene and as long as you’re up for a challenge, Dead Cells is spectacular.

I picked up this game and it certainly is spectacular.

one thing I've noticed is that it doesn't handle switching from docked to handheld mode very well. the game only accepts inputs from the Pro Controller when I switch to handheld mode instead of automatically putting up that menu that lets me switch to the joycons.