Jupiter Corporation is at it again, chuggin’ on the non-stop Picross locomotion. Over the last 23 years they’ve been in the Picross business developing these little picture-decoding puzzle games, dating way back to Mario’s Picross on the original green-screened Game Boy. Their latest series, dubbed Picross S, has gotten its first sequel in the form of S2. But have the years of refinement grown more tasteful, or stale? 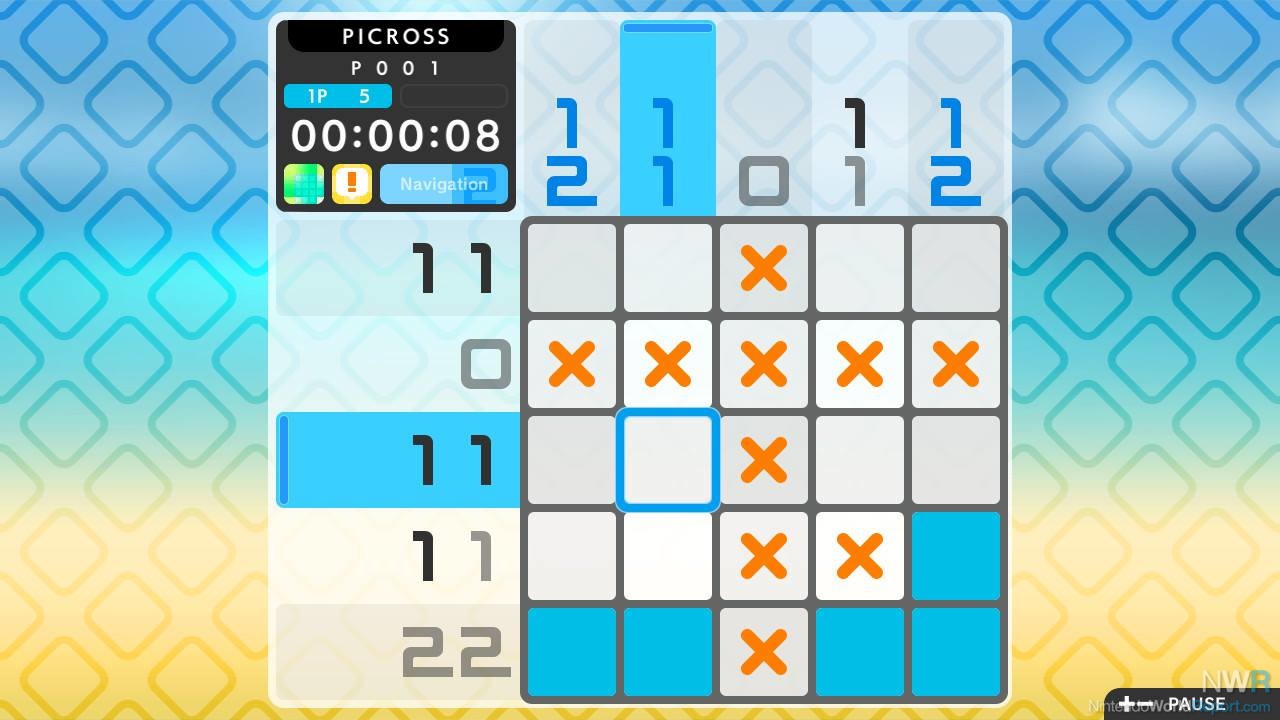 If you haven’t fallen victim to the allure of Picross, the way it’s played is similar to the popular newspaper puzzley-number game Sudoku. Using sets of numbers lined along the rows and columns, the goal is to decipher a picture out of the blocks - almost like chiseling a flat sculpture out of stone. Using both the process of elimination and a little close observation will get you to the solution, and the more you play the more tips and tricks you learn to help you become a speedy puzzle solving machine.

Packed within the game are 150 Picross puzzles times two, that meaning playable in both regular and Mega Picross modes. Mega Picross takes the normal rules of Picross and adds in a fun twist on things that makes the player think in a completely different way. A new mode was added to this sequel, that comes in the form of Clip Picross. These meta-puzzles feature multiple differently sized smaller puzzles within them. By completing normal Picross pictures the player can unlock new puzzles in Clip Picross. While only five of these gigantic are included in the game, they can feature up to 60 smaller puzzles, adding a vast amount of bonus content to the base game. 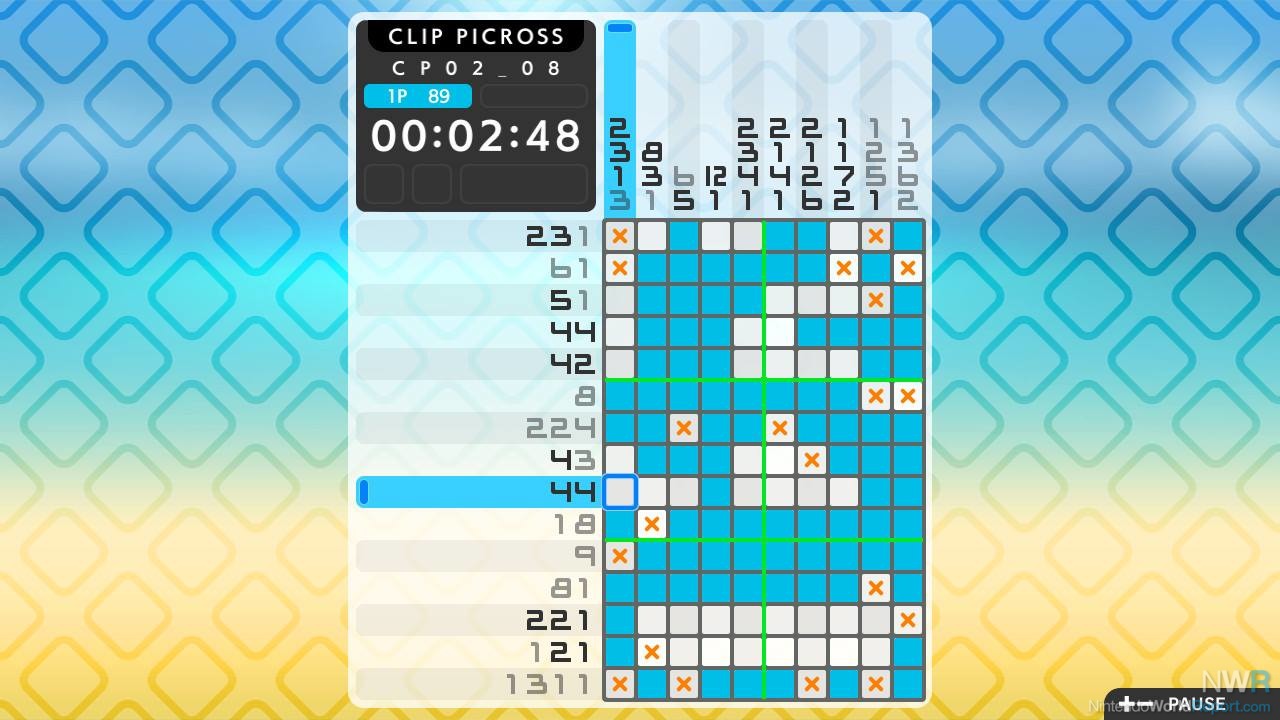 The music, graphics, and menus all could best be described as simple, clean, and pretty - a staple in the recent releases from Jupiter. Having previously played almost solely on DS and 3DS, it came as a bit of a surprise that the use of the touch screen was implemented on Switch for handheld mode. After playing for a little while, however, the button control scheme worked extremely well and honestly seemed to feel faster and more precise than using the capacitive touch screen ever could have been.

While Jupiter has made dozens of games in the Picross series, one unique hook of its newest Switch editions is that they are now featured on the TV screen. To take advantage of the situation they have included a very smart and cool two-player cooperative option to allow a couple of pals to tackle each puzzle together. While not super revolutionary, it’s a pretty neat addition to the normally solo experience, and a great way to teach and show people how to play. 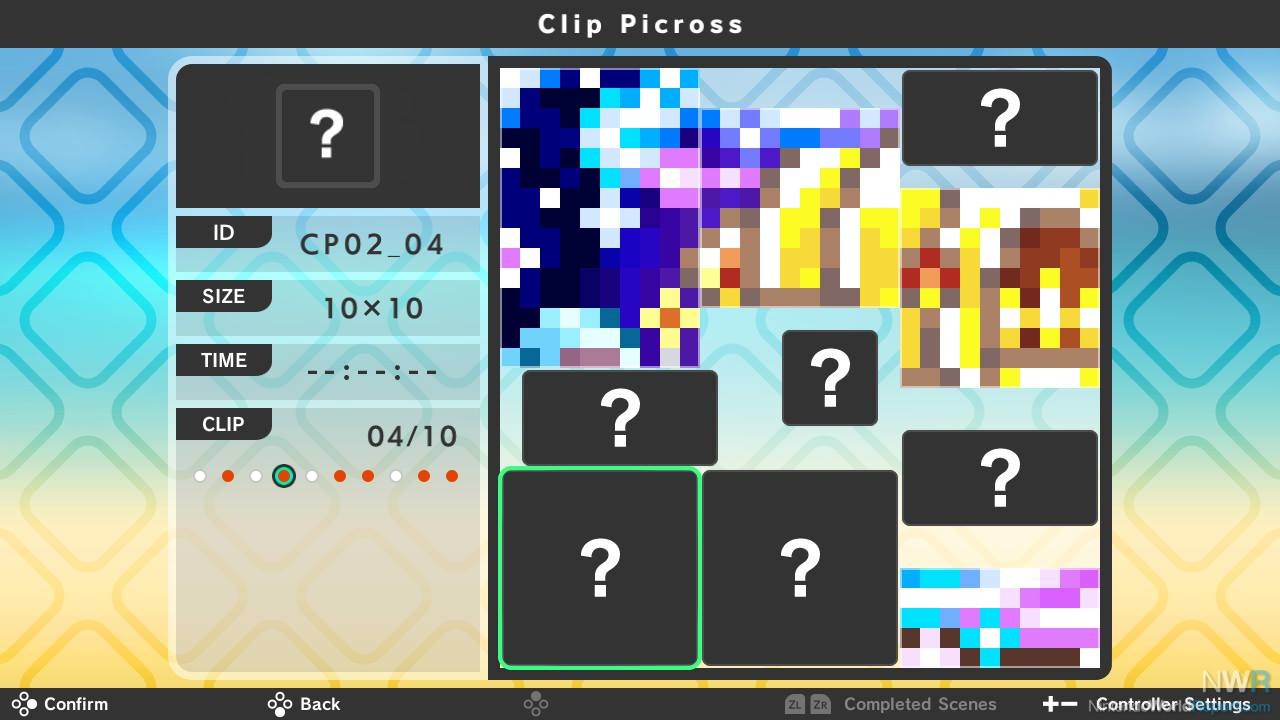 Whether you’re new to Picross, or you’ve played it since the Game Boy days, Jupiter’s excellent and refined gameplay experience in Picross S2 is the perfect way to unwind and relax in short or long bursts. The vast amount of content available between the regular, Mega and Clip Picross modes are also very impressive - and will have you deciphering pictures for hours upon hours, either solo or with a friend. From the hundreds of hours I’ve personally experienced with Picross, and also by other experiences of many friends, my only warning I’d give to new players is this: It can be very addicting, and the life you once knew before may be changed forever. So if you’re a fan of games like Sudoku, you won’t want to miss out on Picross S2.

Does this version also cap out at 20x15 ones?

The SNES NP ones had 25x20, and I'll never not be angry that they don't do any that large.