I’ve always thought that chickens were inherently funny creatures. The dead look of seriousness in their eyes combined with their chubby, flightless bodies has always made me chuckle in any sort of encounter I’ve had with them. That being said, going into Bomb Chicken I was immediately charmed by the pudgy waddle of a seemingly innocent hen laying endless amount of explosive weaponry, as opposed to precious little eggs. 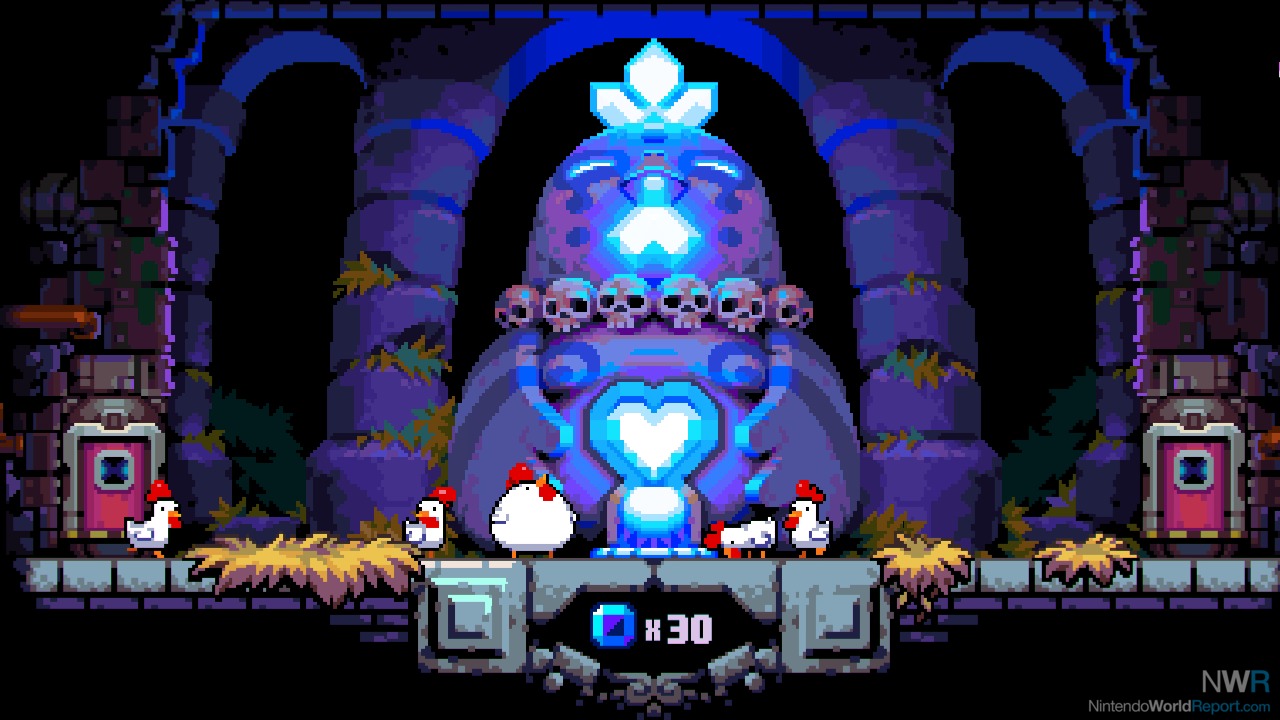 The gameplay is exceedingly simple throughout the entirety of the game. From the get-go, the player has the ability to lay infinite amounts of bombs underneath the chicken, allowing different ways to both decimate various objects and lift the chicken higher to reach other areas. Sticking to the ultra realistic nature of the chicken, players aren’t able to jump like they’ve come accustomed to in the platforming genre. Learning how to utilize stacking bombs fixes this lack of natural verticality, and really is the basis of most of the challenge throughout the game.

Each level is separated by different rooms that act as check points. One of the things I wasn’t expecting when I started Bomb Chicken was the brutal challenge lurking in the deceptively, straightforward campaign. One hit from a stage hazard or enemy and you’re toast - it’s back to the start of the room with you. To top it off, (unlike their bomb spawning ability) the player doesn’t have infinite lives at their disposal. If they run out, it’s game over and all the way back to beginning of the level, channeling the spirit of old-school, hard-as-nails gaming. Difficult as it may be, I found it refreshing to have some pressure to get through the levels knowing that the penalty could send me clucking back to the beginning, leading to some pretty tense situations on to my last life. 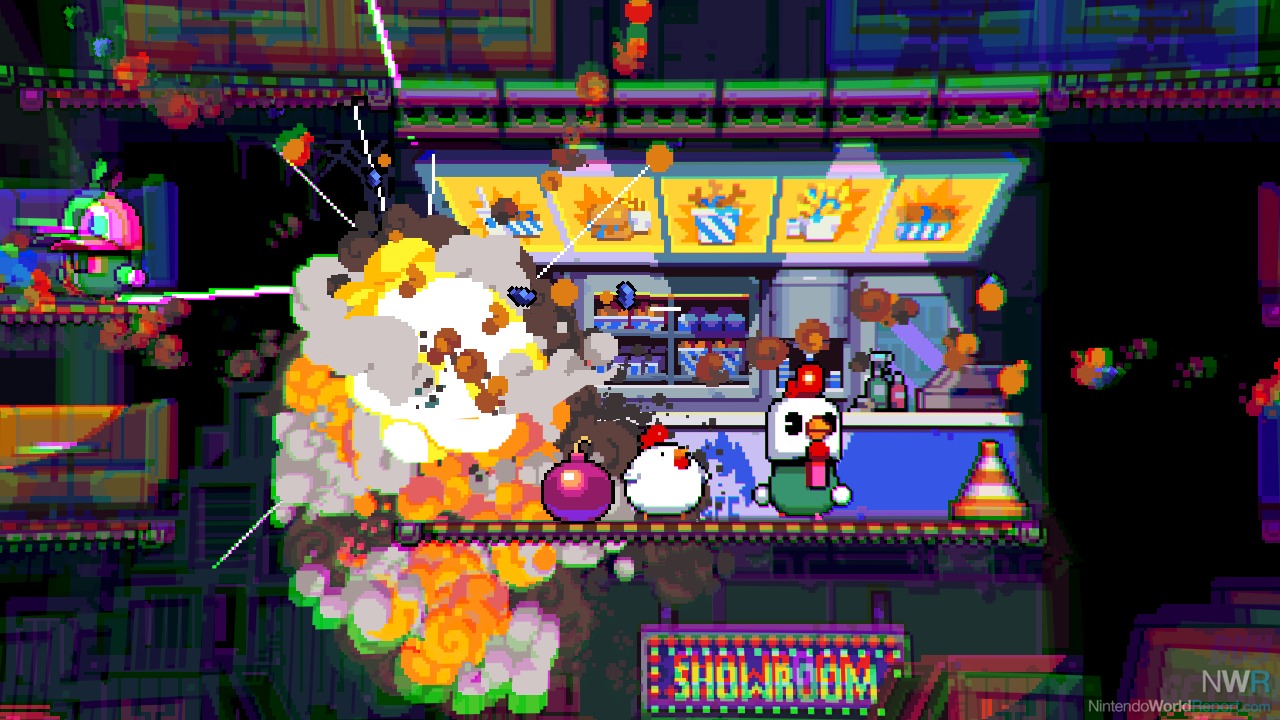 Though nary, an upgrade to your arsenal is found throughout the whole adventure, you do however get to upgrade how many hearts (or lives in this case) you can stock up on while waddling through each level. By collecting little, blue gems hidden throughout the level, these hard-to-get tokens serve as both a currency to obtain more hearts and also an elevated challenge for completion; always pushing me to step out of my comfort zone to nab them from a hazardous area. Light exploration is encouraged, for sprinkled about the world are many secret areas to discover that are filled with little challenges and blue gems.

Like previously mentioned, another fantastic part of the whole experience of Bomb Chicken is the wonderful and quirky design of both the world and the creatures that live in it. Taking place in a sort of underground industrial factory, the setup for what is going on is trickled out the further you adventure. Factory workers are strewn about, bumbling around and sometimes even slacking off playing video games. An array of enemies inhabit each area, and getting around and/or defeating them grows difficult as you press on. The sound quality is also superb, with comical foley and enemy shrieks as they are exploded into oblivion from the crushing talons of a chicken. 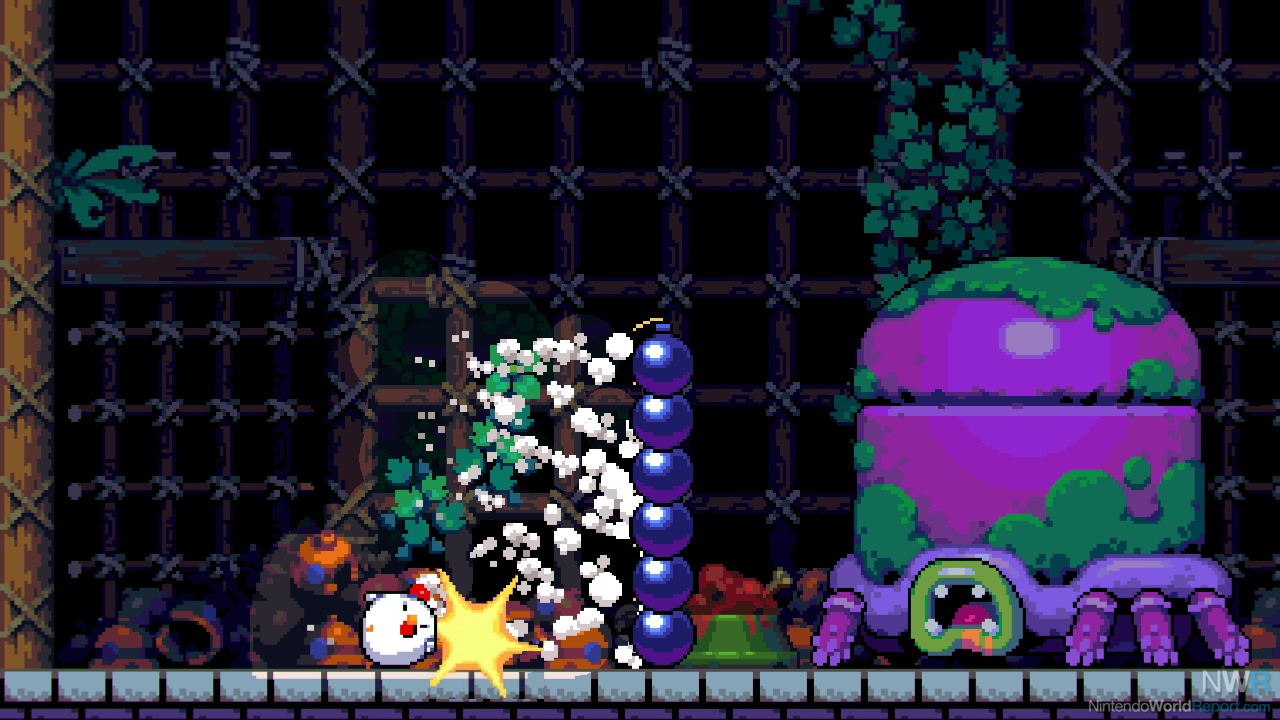 Bomb Chicken is an expertly crafted experience inside and out. Every single part of it is just so dang charming, from the audio and visual composition to the design of each level packed to the brim, delightful collectibles and hidden areas to explore. The only potential problem I could see with certain players is the overall difficulty, so consider this a fair warning - this game is very difficult, and can be quite punishing (but also very fair). If that sounds like it’s up your alley, you won’t want to miss out on this wacky and explosive platformer.