Don’t let the cute exterior fool you, this is a demanding sim.

World War II was the biggest worldwide conflict in history, accumulating an astronomical amount of casualties over the span of six years. Strategic bomb simulator Bomber Crew, aims to capture the tense and devastating feeling of war with this punishing simulator that focuses on micromanaging a crew to turn the tide. Just like in real conflict, crew members will be lost and planes will crash, but rallying and pushing on is the name of the game. With some roguelite elements thrown in, there’s a lot of manage, which turns out to be both satisfying and frustrating. 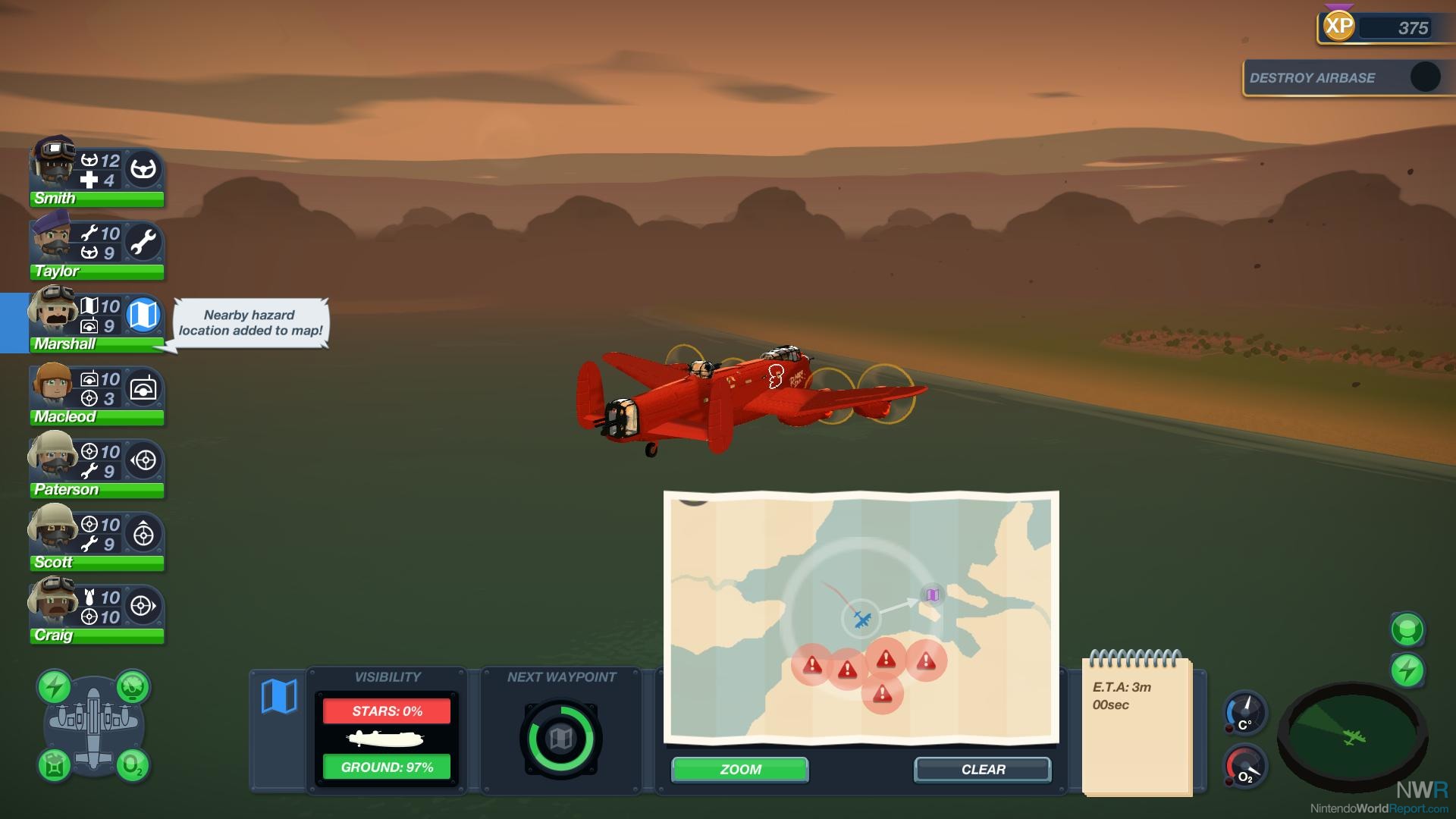 One might imagine Bomber Crew would rely heavily on flight simulation and while you’ll certainly be controlling the aircraft, though not exactly how you’d think, the majority of the game will be directing crew members to achieve different tasks. Crews are assembled of seven members, each with a few different roles to fill. Missions start by selecting the pilot and choosing to take off, from there you’ll then raise the landing gear, and tag a location set by the navigator. Tagging is critical to any given mission as it’ll be used to not only navigate the ship, but also locking onto enemies for the gunners to attack. This is done simply by pressing the ZL button which brings up a viewfinder and then hovering over icons will tag that location or enemy. This is an easy task to monitor while the action is light, but as missions progress it becomes a much more daunting task when enemy planes litter the sky in all directions. That’s only compounded once the plane starts to break down in different areas, requiring a shift in attention.

When in the heat of battle, things usually don’t go according to plan, and being quick on your toes is vital to success. As your ship begins to break down while under enemy siege, it forces you to micromanage each crew member as new problems continue to arise. Electrical and hydraulic failures are commonplace and require immediate attention because when not functioning properly, other important abilities such as navigation, gunning, bombing, and landing are impossible. Much like tagging, no one task is too difficult to manage, but only becomes problematic when juggling everything at once. There were instances when the engines were on fire, the electrical system failed, a crew member was on the verge of dying and needing medical attention, all while rapidly approaching the mission target. You’ll need to immediately decipher what’s most crucial to the task at hand and delegate the responsibilities accordingly. Orders are given by selecting the member then pressing the ZR button and moving around the control stick around in a side profile view of the ship. I found this to actually be a bit difficult when things got chaotic, but fortunately using the D-pad snaps onto objects and areas of interest, making it much easier to quickly dish out orders. It’s a rewarding feeling to properly managing everything as it comes, but I found tagging enemies to be difficult since the radar often isn’t helpful enough. Fortunately for those struggling, you can slow down time by pressing R, making it easier to manage, but comes at the cost of forgoing an extra bonus. 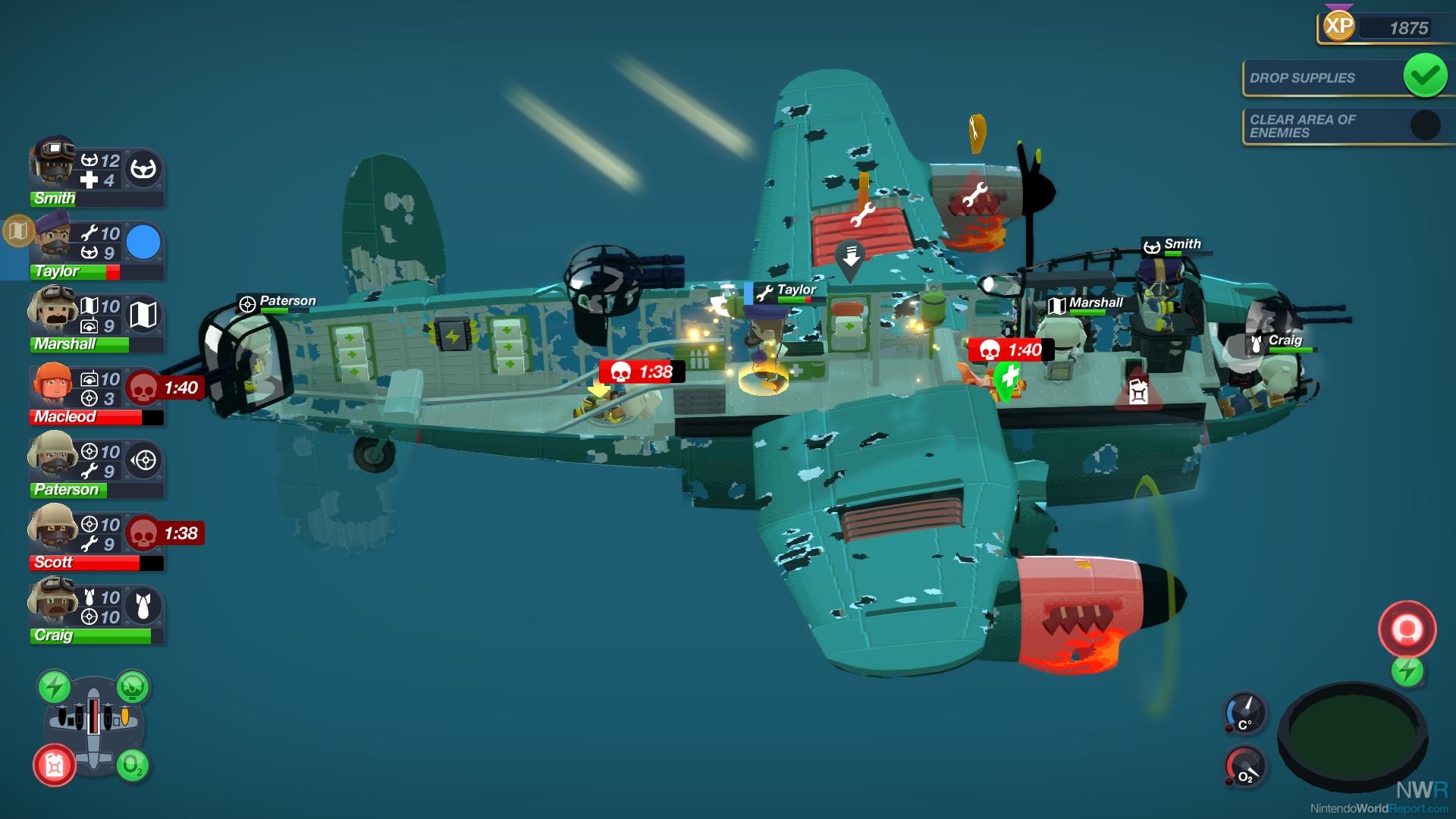 When it comes to selecting a mission, you’ll head to the briefing room and have a few different options to choose from ranging in difficulty and length. Completing a number of normal missions will open up a critical mission, which is how the story campaign pushes forward. The more difficult the mission, the bigger the rewards, which come by way of cash to upgrade your crew and plane as well as research points which unlock more powerful upgrades. Most missions require you to fly over enemy territory to drop bombs on buildings and ships, but some are recon focused, which end up playing almost identically. Despite the similarity, they are enjoyable, but do become repetitive even when managing the crew properly is exhilarating. There are times when an unexpected objective is thrown at you mid-mission, such as taking out an opposing ace pilot, but aren’t necessary to complete the main objective. The problem I found with most missions is it just takes too long to get into the action, leaving a relatively mundane intro and conclusion to each. A fast-forward option helps to elevate this a bit, but it’s only accessible for the very beginning and very ending, still leaving plenty of ground to cover in regular speed. It does give a sense of anticipation leading up to when things get hectic, but after a few missions it wore off and became more of an annoyance.

Arguably the most interesting aspect of Bomber Crew is that it tosses roguelite elements into the fray, which turns this seemingly cute looking game into a brutally tough endeavor. As you complete missions, each of your crew members will gain experience and level up. Leveling up unlocks abilities that will greatly help on the battlefield, even allowing a crewmember to pick a second occupation once hitting level five. Having a crew filled with abilities and second jobs comes in handy, but if they die while in action whether it is from enemy fire or the plane crashing, they’ll be lost forever. Once back at base, new recruits will be waiting to fill their spot, but never with all the abilities the previous member had. As you progress the recruits become stronger, so you won’t lag too far behind for a death, but it’s usually a good idea to run an easier mission after a crash to regain some experience and money to outfit each crewmember with the proper gear. Deeper into the game, I found myself grinding out some easier missions to help prepare myself for the demanding missions. While it was fun to upgrade the crew, I found it far more fun and interesting to upgrade the plane. There are a bevy of options to tinker with, including upgrading turrets to automatically reload, the choice to go light or heavy armor, and even the option to change the color and decals to give it a personal touch. Much like the crew, if you crash you’ll get a new plane to work with, but with seemingly random upgrades just below the level of your previous plane. 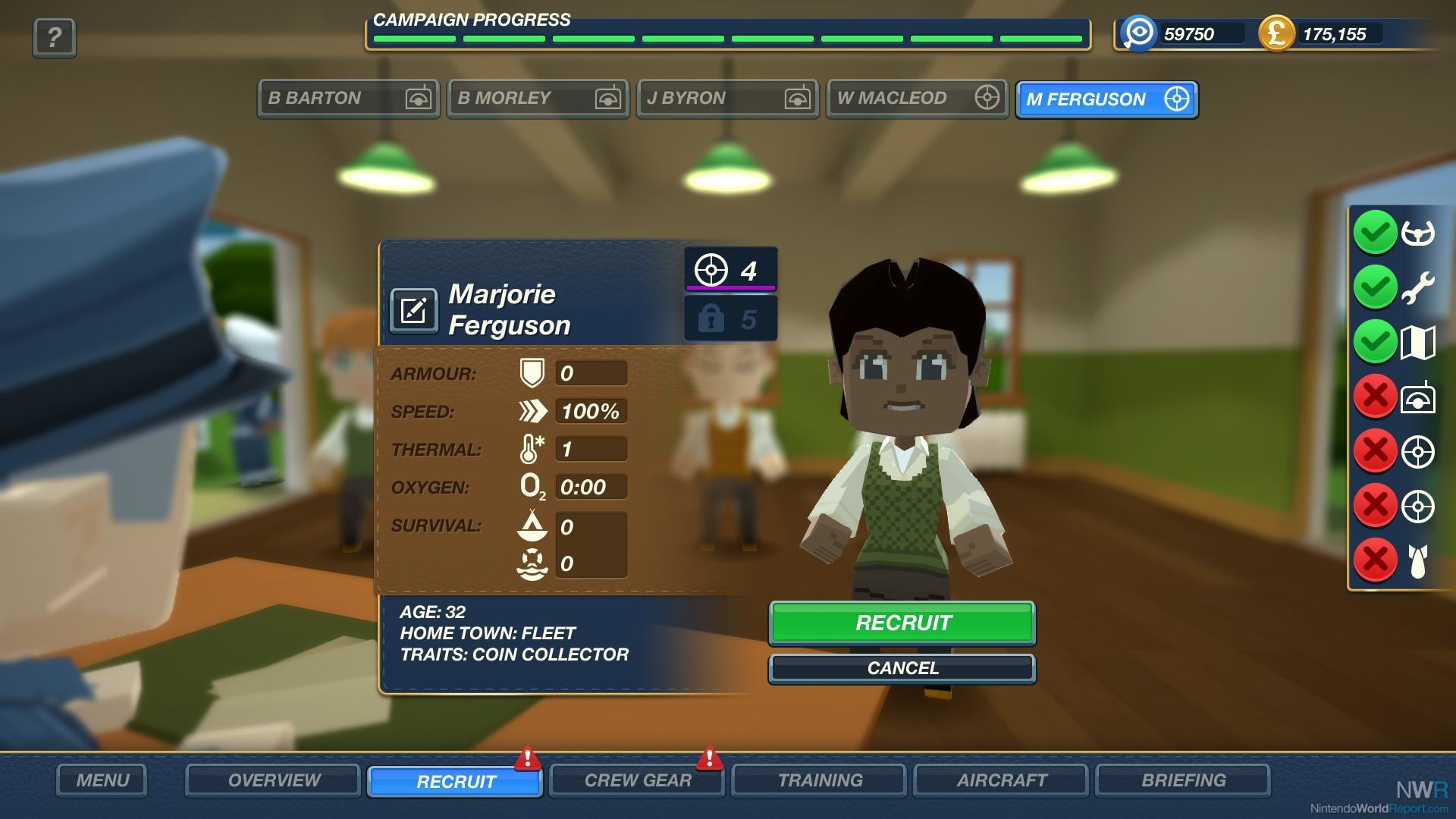 I always find it amusing when a cute and bubbly art direction is paired with a brutally tough game and that’s exactly the case here. The cute art style for the crewmembers gives off an innocent feel to the game, which is ironic when considering it’s about flying a bomber plane during WWII. Despite that, the relatively simple art style helps to keep the plane uncluttered, making it easier to move keep things organized during the mission. The space in the plane is small, so in handheld it can be a little difficult to tell which seat is which, and it doesn’t do a great job of labeling them. In fact a lot of things are either mentioned once or left up to the player to discover. There was an option to add a brown bag item to my supply cabinet, but I only found out that it was a parachute after looking online. Landscapes are sparse, but there is something tranquil about flying over the areas looking off to the distance. There are a few camera angles to play with, but when I had downtime I found the zoomed out free range camera to be the easiest and most enjoyable.

While on its surface, Bomber Crew appears to fun romp through the life of World War II bomber, underneath its cute exterior is an extremely challenging management simulator. Missions tend to be repetitive, but the thrill of executing them flawlessly is equally as satisfying as it is devastating when a crash whips out your entire crew. Roguelite elements throw a great wrinkle to the gameplay, but do come at the expense of light grinding when losing members of the crew or plane. Although not without blemishes, it presents an interesting and challenging take on simulator that requires quick thinking and even faster reactions.