A hide and seek for the digital age, Invisiballs delivers intense moments of fun but needs four for optimum play

Local-mutliplayer-only games are a bit of a risk, even on the Switch. Relying on the availability of some friends, and with no way to enjoy the game solo, when the planets align and you have people available and willing to play, the experience needs to deliver. In its real-world form hide and seek is certainly a classic kids’ game that can’t be enjoyed alone, can only be so good with a single friend, and gets better the more people you add. That makes it fitting that Invisiballs has been sort of billed as a next-gen hide and seek; it has the same limitations but can also be quite a lot of fun if you’ve got four people to play with. 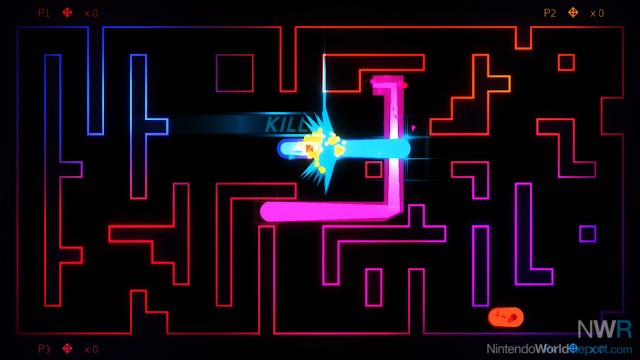 Visually the game is simple but has a somewhat futuristic look to it that reminds me most of a TRON lightcycle grid. The playfields are maze-like, wide open, or some fusion of both. The characters really aren’t anything more than a dot typically, though when you attack it will leave a color trail. Since, for the most part, you’ll want to be incognito the majority of the the minimalist appearance makes sense.

The hook is that everyone is, at once, both a hider and a seeker. You can only move in straight lines until you hit a wall. At the point you make contact with the wall your colored dot will temporarily be visible. When in plain motion or sitting still you’re invisible though, and that’s where strategies begin to form. For the most part, it is all about knowing where your opponents are and trying to deceive them about where you are when possible. You want to try to sneak up on them and then attack, if you hit them while you’re creating your lines you score by taking them out. Of course your attack has a limited charge so care is needed. The result is a game with quick bursts of intensity followed by a general sense of tension as people try to keep track of where people are and set up for the next attack. 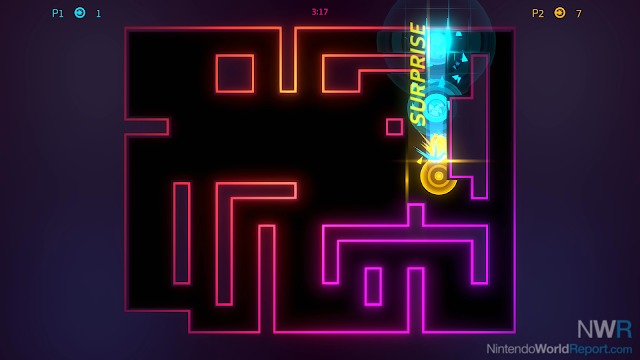 Aside from requiring other people (the more the better) to play, it suffers from a lack of overall variety. Aside from the main deathmatch-ish Free For All mode there’s currently an alternative Gold Rush mode as well where a gold gem gets placed on the playfield and whoever gets it first then has to try to avoid getting hit for a set amount of time in order to score. This is a great alternative and changes things up in fun ways, somewhat driving to keep intensity up rather than everything being quite so cat and mouse. There’s a slot on the menu for an additional mode saying it is Coming Soon but until that’s in place you only have those two options to work with.

Overall I was surprised how positively my family reacted to Invisiballs. They’ve become pretty jaded with mutliplayer action games so when their initial skepticism melted away quickly to be replaced by whoops and yelling about who got who it was a sure sign the game was onto something. That said there’s also no getting around the limitation of really needing four people to be an optimum experience. A two or three-player match can be done but it is far more of a cat and mouse game followed by quick bursts of attacks until someone gets a kill. Only when you have a full roster do you have enough going on that you begin to see a wider variety of strategies in play and the game hitting its stride. A great option if you regularly have some friends or family around to play with though.