Skeptical going in but it made me change my tuna. 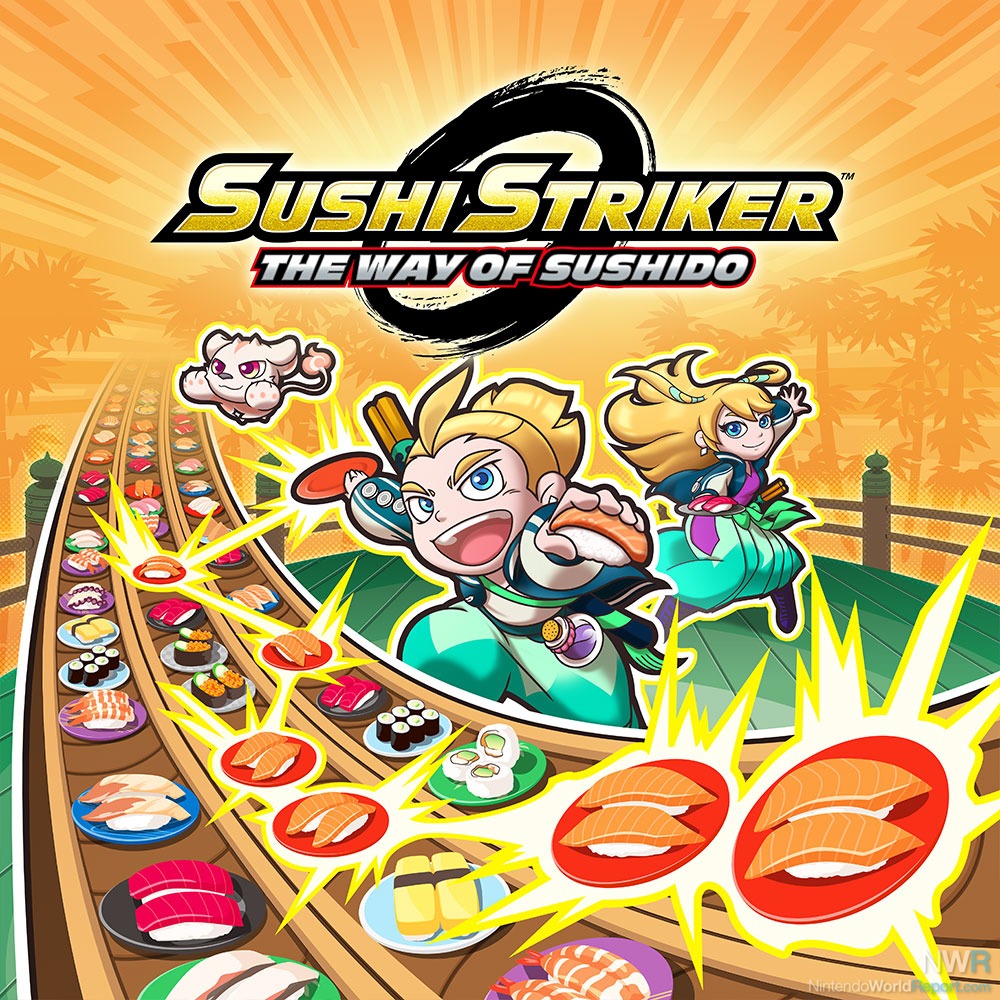 Over the years, Nintendo’s library has become flush with weird, out-there experiments. Sure, Mario’s name is on multiple games a year, but every so often they put out a Pocket Card Jockey or a Tokyo Mirage Sessions. And then sometimes they toss out a Sushi Striker. This Switch game (also available on 3DS) is co-developed by indieszero, best known for NES Remix and Electroplankton, and takes place in a world without fish where sushi have become some mythical instrument of war. After the sheer looniness of the setup, Sushi Striker settles into a novel style of quick-paced puzzle game draped in a wealth of RPG-esque depth. It is a thoroughly brilliant adventure that is smartly made, filled with surprisingly high production values, and packed with content.

Aside from story sequences, most of the time is spent in puzzle battles with seven rows of sushi conveyor belts, three for each player with a shared lane in between. The belts provide an endless amount of sushi on colored plates that can be matched together and eaten to create stacks of empty plates that can be thrown at the enemy. The basic gameplay is dense but simple. At its core, success can be found by just selecting random plates and matching up chains as quickly as possible. To obtain mastery of the art of the sushi striking, achieving the zen-like state where your matched stacks are piled high and skills are used in smart ways to accent your favorite dish bonus. 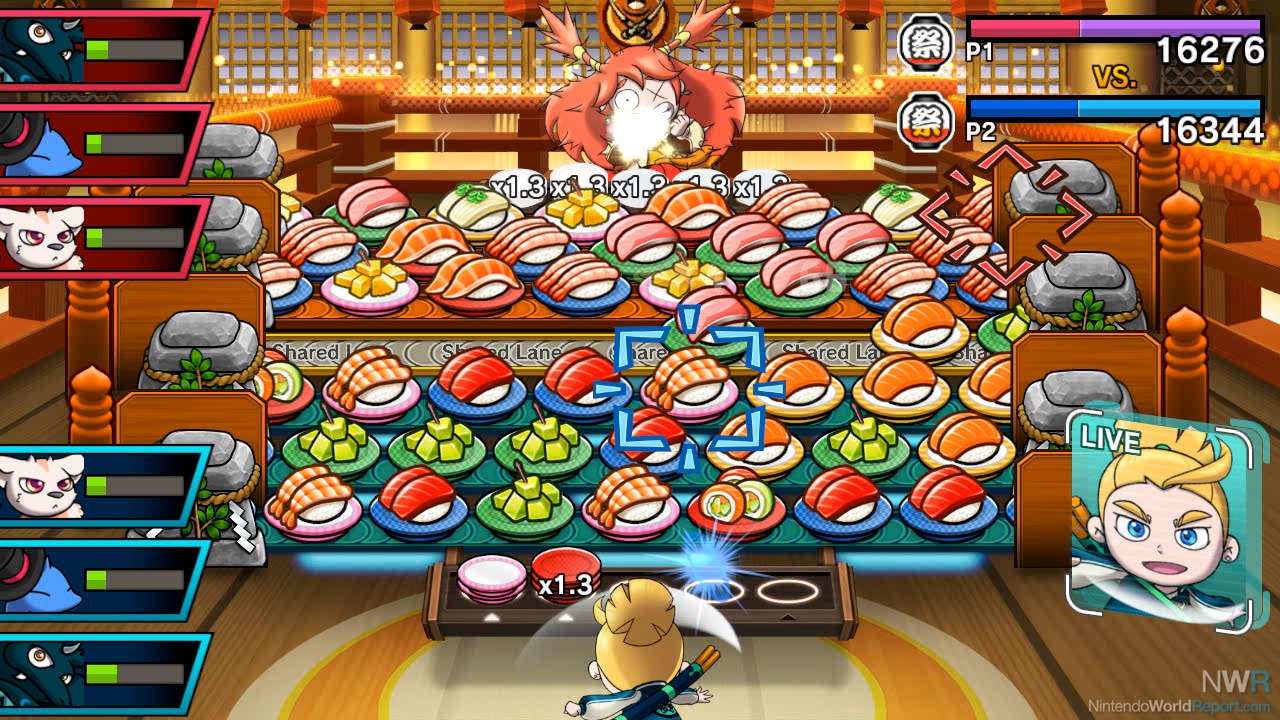 That’s where Sushi Striker excels. While it’s hard to wrap your head around at first, once it clicked with me, it became second nature to zoom around the board and through experimentation, I found the right set of skills that suited my play style the best. Skills come from Sushi Sprites, little Pokemon-like critters that are the embodiment of sushi. They can level up and evolve when used. Skills are used by eating sushi and I’d often use Electrozap to boost my attack power and unleash a stockpile of tall plate stacks. The Plate Jumper skill was also a favorite, as normally you have to connect plates that are next to each other but Plate Jumper allows you jump all over the board.

Moving around the play field can be done using the analog stick or the touch screen. While the stick is sometimes slow to go around the board, it became my preferred way to play. The touch screen feels like it should be better than it is, but my fingers would obscure too much of the screen and I didn’t feel like the slightly quicker movement was worth that trade off. 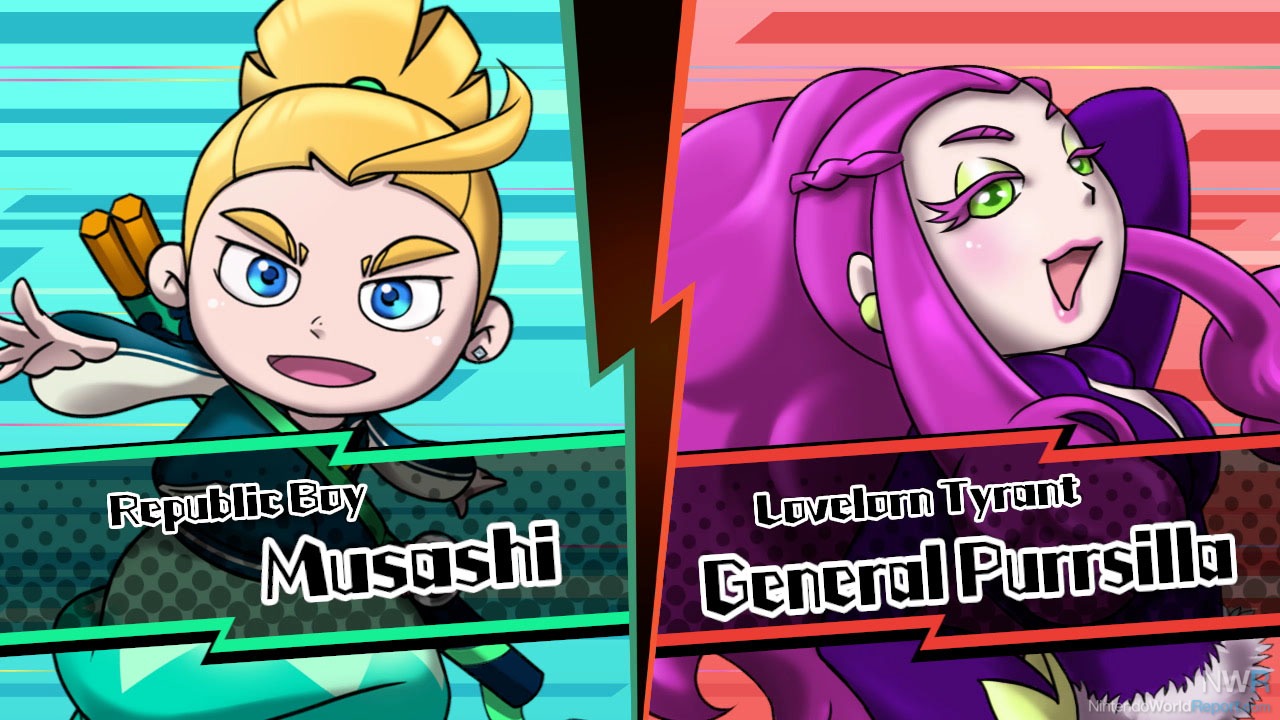 The story is the showcase here, split across multiple chapters and regions with close to 200 levels to satiate your sushi hunger. New ideas are introduced constantly, whether it’s stunning wasabi plates or bombs that need to be matched quickly before they go off. Each stage has three challenges that offer an experience bonus and unlock more levels that point you to different play styles, whether it’s focusing on healing a lot or chaining together massive combos for lots of damage.

A wealth of animated cutscenes have astonishingly high production values and feel like they could be straight out of a Saturday morning cartoon show. It’s a very silly and tropey adventure, but it commits so thoroughly to the nonsense concept that it remains engaging and funny throughout. A lot of mileage is squeezed out of the idea of food being a cause of war and also a weapon, and when it starts getting into stuff about enemies hating salmon and a sect of warriors wasting parts of the sushi by only eating the fish, it’s positively delightful. 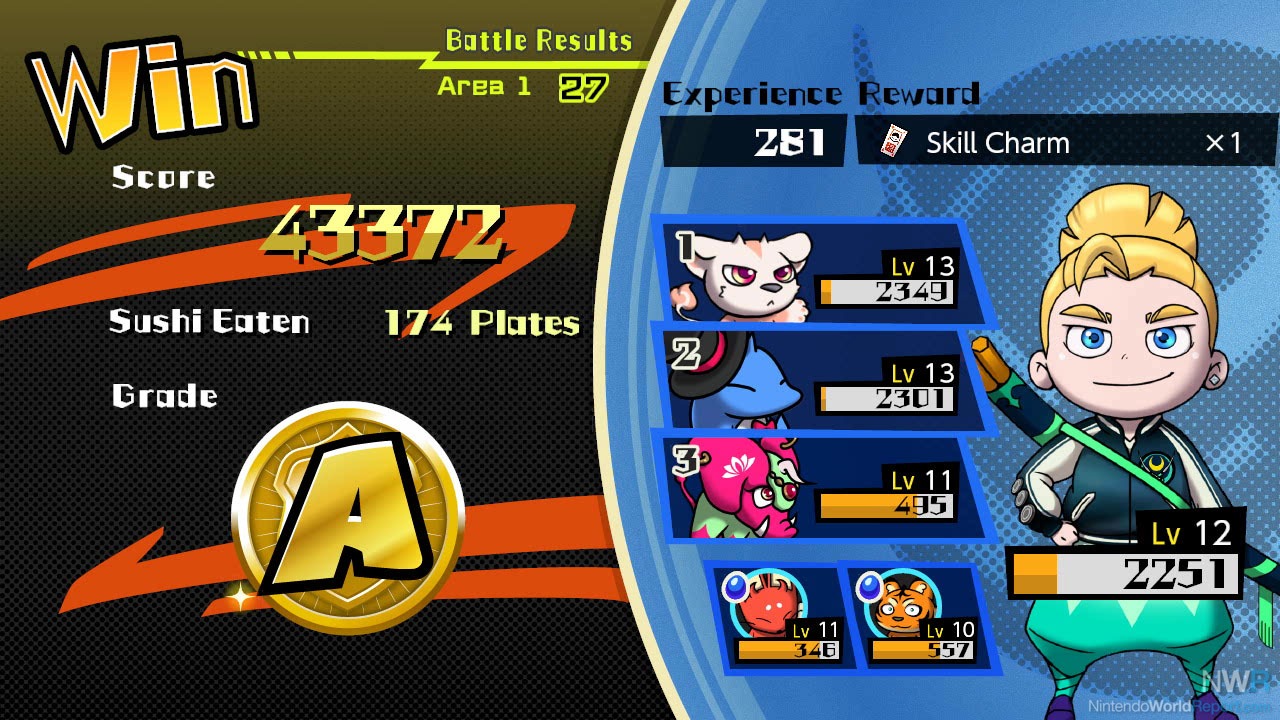 Two-player battling is also a part of Sushi Striker, but it’s more of a bonus afterthought. Local is weirdly done on a single screen where the more experienced player is advised to play on the top since it’s a bit of an obscured view. This isn’t a game designed for easy pick-up-and-play multiplayer, but if two players understand the basics, the matchups are intense. Online is just simply one-on-one matches but I wasn’t able to find an opponent in the pre-release period. I worry about the longevity of the online, but if a crowd develops, it has the potential to be enjoyable.

But even if an online community doesn’t develop, the single-player experience is bursting with substance and depth. A straight run through it is still around 10 hours, but the puzzle gameplay is nicely soothing and varied so I was encouraged to retread past levels to get S ranks, complete the star challenges, and uncover bonus levels. A slew of Sushi Sprites and favorite dishes can be discovered as well. Everything is tied to an achievement system that rewards you for hitting different plateaus, such as eating a lot of health-regenerating sweets or earning a certain amount of S ranks. I got sucked into trying to complete all the available objectives and most of the rewards are more levels and Sprites. It might not be the most enticing goal especially when you’re done the story, but that didn’t bother me because I was having so much fun along the way.

Sushi Striker is a diamond in the rough in Nintendo’ Switch lineup. This offbeat and peculiar puzzle game takes a ridiculous concept and manages to shape it into a shockingly deep, balanced, and varied low-key masterpiece. I was looking forward to checking this game out since it was shown off, but I never expected it to be this good. Don’t sleep on Sushi Striker, but be mindful that you’ll probably really want to eat sushi after playing it for a while.

I hope the 3DS version is just as good