The legendary Treasure-made shoot-’em-up returns to a Nintendo platform.

Here’s an interesting factoid to start things off: “Ikaruga” is the Japanese name for the masked grosbeak, a finch that lives on the eastern seaboard of China and the surrounding islands (including Japan). It’s not a particularly noteworthy passerine so I remained unsure of why Treasure Games decided to name their seminal vertical shooter—now praised as one of the best in the genre—after said bird. Ikaruga (the game) got its start in Japanese arcades before being ported to the Dreamcast in Japan, and then later to the GameCube in all regions. Here in North America, Ikaruga launched in 2003. Now it finds itself on the Switch, and Ikaruga brings a lot of expectations to the table.

While the core gameplay of Ikaruga is still vertical shooter bullet hell, Treasure implemented a unique “polarity” system that makes things simultaneously more approachable and more stressful. Your ship can change colors from black to white. This is key because every enemy ship is either black or white, and their bullets and lasers are color coordinated. If you’re the same color as the bullets, your ship can absorb them and build up energy towards a missile barrage attack. If you get hit by the opposite color bullets, though, it’s curtains. Critically, enemy ships are dealt double-damage by your opposite-color attacks, so Ikaruga becomes an exercise in risk/reward gameplay. 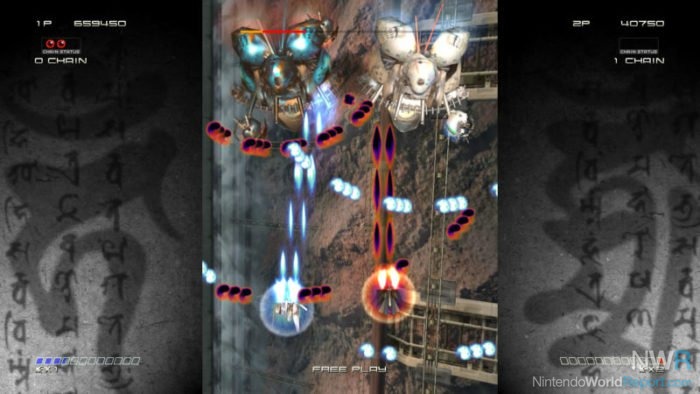 You’re not just avoiding enemy ships and their attacks—Ikaruga gleefully throws you into tricky situations where you’re avoiding environmental obstacles too, and the game seems to enjoy funneling you into tight spaces while also dealing with bullets and polarity. Boss battles are typical Treasure fare: big, complex, often multi-stage, and always stressful (but in a good way). I haven’t experienced that old giddy feeling during a boss fight in a long time. Interestingly, if you take too long to destroy them, bosses actually LEAVE and you get a bad grade for that level.

This is a punishingly difficult game, even on Easy (learn to love your missile barrage). Thankfully, a number of features let you tailor the difficulty to your ability somewhat, like setting the number of lives and continues you’re allowed to have, although doing so may void your ability to set a high score. You can change the visual layout as well, including flipping your TV (or Switch) into “Tate” mode, changing the text and icon size, and choosing where certain icons are displayed. You have the option of unlocking “Extra” content the first time you turn the game on (usually locked behind beating it), which is something I eagerly did, as there’s a very good chance I’ll never beat Ikaruga without nerfing it as much as possible. The Extras don’t amount to much—a gallery of concept art, a music player, and a “Prototype” mode in which you must absorb bullets in order to gain ammunition. 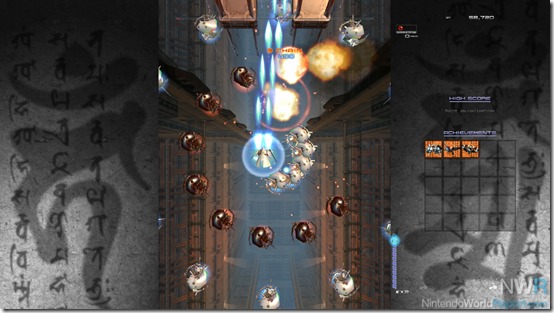 The game features online leaderboards, though this is one thing I dislike: after you inevitably die, it takes a weirdly long time for your score to update. Some might criticize Ikaruga’s short length—there are only five levels. However, each level is an order of magnitude more difficult than the one before, so you’ll be spending a lot of time practicing by selecting a level from the main menu before diving back into Arcade Mode to try and get through to the next level (you must live to see a new level in Arcade Mode before you can practice it in Level Select mode). Ikaruga also features two-player co-op, which is about as frenetic as you might expect!

Despite everything being one of two colors, every ship looks distinct and every background is beautiful in its complexity. And the music, my god, the music. Turn the volume up!

Ikaruga is great—everyone should play it unless you’re fundamentally opposed to the genre. It can be frustrating but I found that I got a little farther almost every run. Maybe someday I’ll even try to get through Arcade Mode with the default settings (on Easy) so that I can actually post a high score!