Saving an empire is a lot harder than ripping one apart.

I’m tense, my fingers are getting tired, and I’m watching my odds of victory slide from near-certainty towards impossibility. I’ve been playing for an unknown number of hours, it’s now well past bedtime, and I’ve been hammering on this crystal golem for 10 minutes. I’m sending my three units into the fight over and over - like a machine, issuing the attack pattern X,X,A,B,X,A,B,A,A with a meter maximized for effect. Keeping the beat is getting harder; this thing hits like a tank so I have to interrupt my patterns to defend, and now the game’s framerate is regressing into a slideshow. I can’t see what’s going on - I’m playing this thing only by feel. It’s time to finish; I’m going all in. 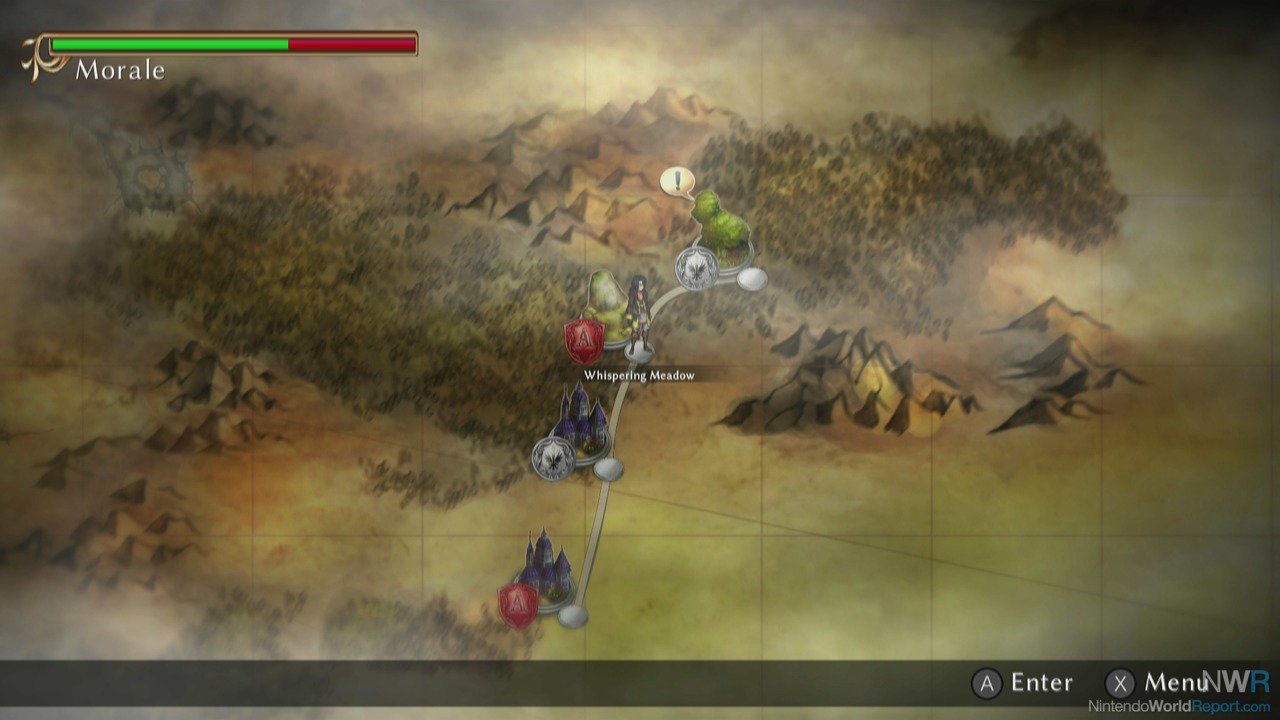 So the plan is we just march in there and make me emperor.

Fallen Legion a bit difficult to succinctly summarize. You play as one of two claimants to the recently vacated throne of a fraying empire, a title neither previously desired. Your race to secure the crown has you moving your army across a map, stopping at nodes along the path to either do battle or to receive plot.

Both claimants, Cecille, the late Emperor’s daughter and Laendur, one of his finest generals, have come into possession of the power to summon the “platonic ideal” of weapons. This magic has the weapons take the form of dead heroes, called Exemplars, in order to fight for their new master. In battle, that means selecting three such units and leading them into a series of fights. The would-be emperor and their retenue run through a hall, stopping intermittently to either clash with a group of foes or to answer a moral question. 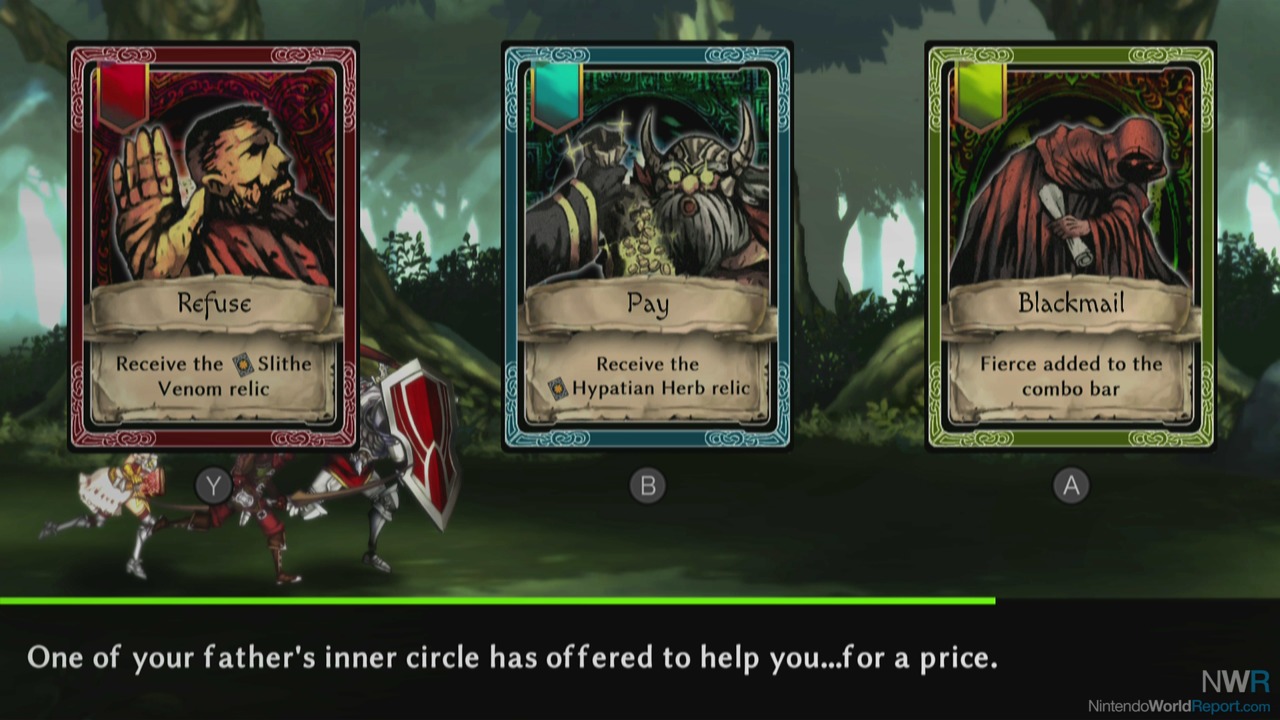 I vote blackmail. I always do.

The questions are scenarios, such as a captured spy or a disloyal division, and each presents three choices. At a minimum, these choices will change the stats of some of the units in your party for the duration of the fight. Some choices are larger, asking the “emperor” to take sides in conflicts in their army or to wade into the politics of the empire. These choices create branching plot lines, and impact the role of secondary characters in the larger plot and can change the circumstances of battles.

The combat reminds me just a little bit of Xenoblade Chronicles 2. You can absolutely get by most of the time by hammering out buttons mapped to each of the three party members as their relevant meters fill, but there are layers of complexity to it all. Each class has a specialty, be it the hulking knight Zulfiqar, or the petite riflewoman Winchester. Creating the right combination and layout of three characters allows layering their strengths.

One of my go-to configurations involved Zulfiqar in the front, the speedy spearwoman Longinus in the middle, and the mortar-wielding Dardanelles in the rear. Zulfiqar protects the team, Longinus hits frequently and builds the combo chain and meter, and Dardanelles has a skill that draws the enemy’s rear character (usually a mage or a healer) out from behind the protection of their front line. Learning how each character reacts, how fast they can attack, and how to combine them to build up combos - denying enemies a move while increasing a damage multiplier - can let you absolutely steamroll enemies. Learning to block, and how to use blocks to launch other combos keeps the party going deep into some of the longer engagements. It can look like chaos, and often feels like it, but there’s an art to keeping it all going.

Exemplars themselves grow, but not via normal RPG leveling up. They unlock stat modifiers and evolve into new classes based on the decisions you make during battles. Overall, they get stronger as the game goes on, but it isn’t a straight line. Change can be halting or sudden, and requires assessing how the change impacted optimal use.

When things are tense, and the enemies difficult, managing all these systems is absolutely mandatory, and the game often does a very poor job of explaining it - offering the briefest of tutorials and no “gate” to check that you learned the lesson. Instead, I learned through failure and experimentation. 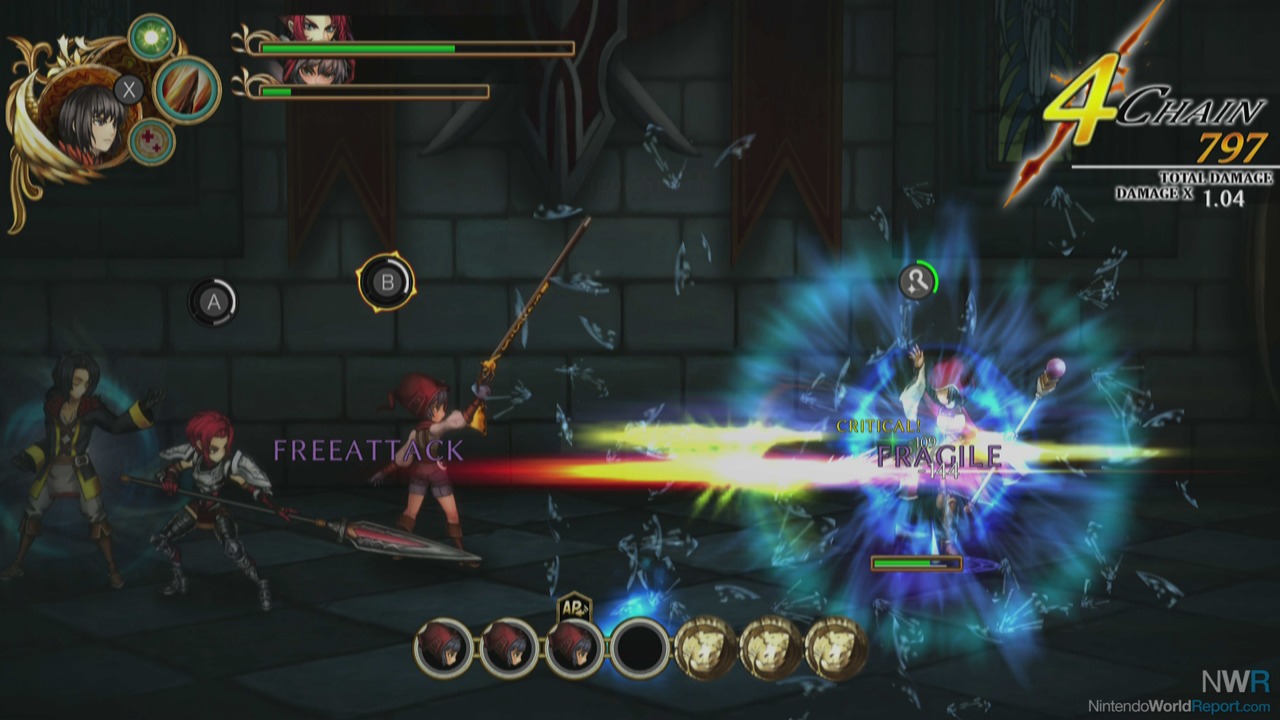 Count all the indicators. I'll wait.

The bosses have a devious power: slowdown. In moments, it is the worst I have ever seen - with the action on screen coming to an absolute halt, a trait that apparently showed up on other platforms. Under normal circumstances Fallen Legion performs without issue. The animation of both enemy and ally characters are smooth and planning to execute a guard is totally an issue of skill. However, against bosses the game can very suddenly turn into a slideshow, with one-quarter of a second or more of dropped frames.This means boss fights, which require mastery of combos and blocking, have to be done without any visual cues and with timing impacted by an inconsistent game clock. I usually was able to hit the timing based on feel and sound, but more than one failure can be attributed to the slowdown.

The way Fallen Legion tells its story is really enjoyable. This world has lore and a history. This war isn’t the first over this now-ragged empire, though there’s a sense that it might be the last. Reports stream in of the actions of minor factions and aspiring politicians. I stepped into this world by first picking the campaign of the once-confident, affable, and broadly loved Legatus Leandur. Reluctantly recruited into a campaign for the throne by his brother and a devoted subordinate, the stress of war unwinds both his confidence and morality. His evolving mistrust impacts his relationship with his allies, turning what looked like rule by acclamation into a struggle for survival. 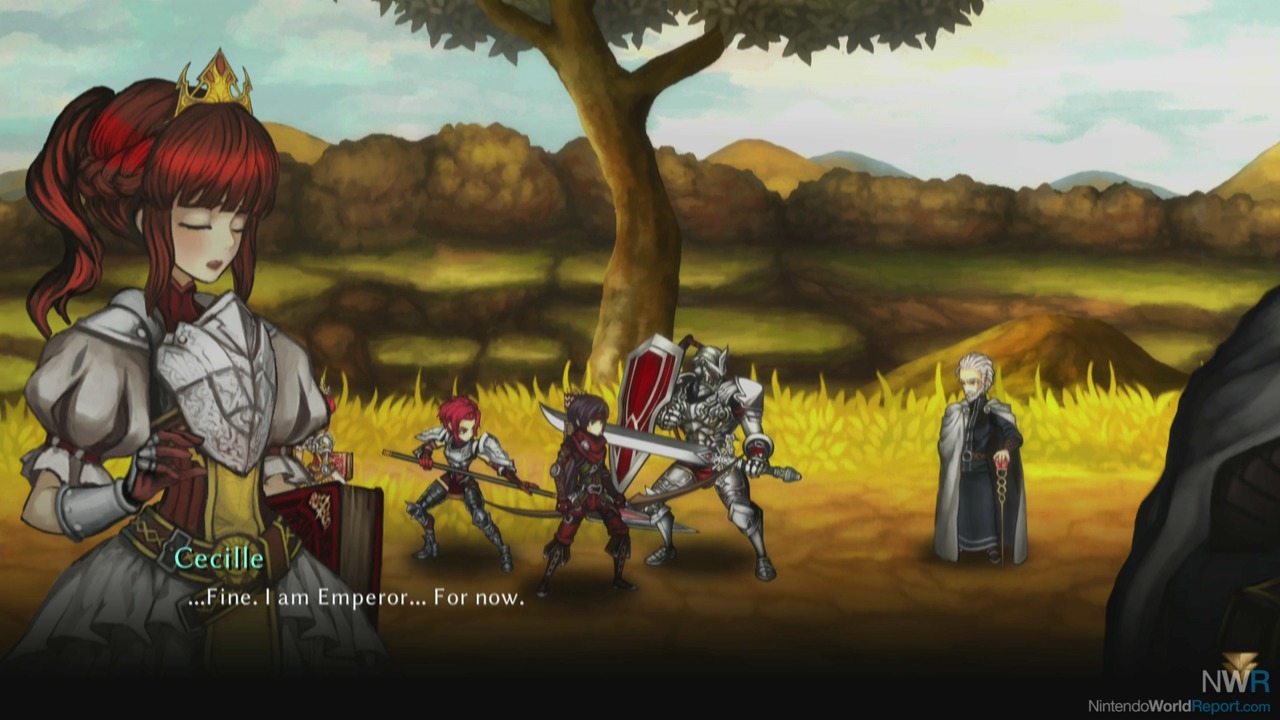 I detect a lack of sincerity.

Difficult decisions have repercussions for his relationship with his subordinates. A long-running subplot constantly demands Leandur decide how to inject himself into a dispute between a blood-thirsty centurion and a cowardly quartermaster. In an effort to prevent his rival from launching more ill-advised adventures, the coward invented fake supply “shortages.” Already distrusting the centurion, I partnered with the quartermaster to stimey his ambitions, and the story made me live with the consequences.

The game looks nice, even though the art style isn’t always to my personal liking. Dialog is presented using well-drawn 2D character portraits. Combined with the writing, the cast is able to stand-out. The sprites and 2D game world they run through look good, though the attack animations sometimes looks a bit like paper puppets. The performance issues dramatically impact the visuals - in that they’re not moving. Story sequences overuse some of the same backgrounds, even when they’re not the most appropriate (using the war-tent setting inside a castle, etc).

The sound work in this game is really strong. The music is fantastic. The game has a relatively small, but varied, soundtrack that sets the mood for each sequence. The boss battle theme, “Blood and Roses” explodes with bombastic instrumentation, quick changing parts, and shifts in tempo and volume. Away from the intensity of battle, the game’s soundtrack can range from triumphant to the somber tone of a song like “Rain.” The sound effects are good at cueing timing during battle, especially when the game’s visuals are taking a few frames off. Some of the voice acting isn’t great; there are attempts at accents that just don’t work, but there’s not much narrative voice over, so it isn’t a big deal. 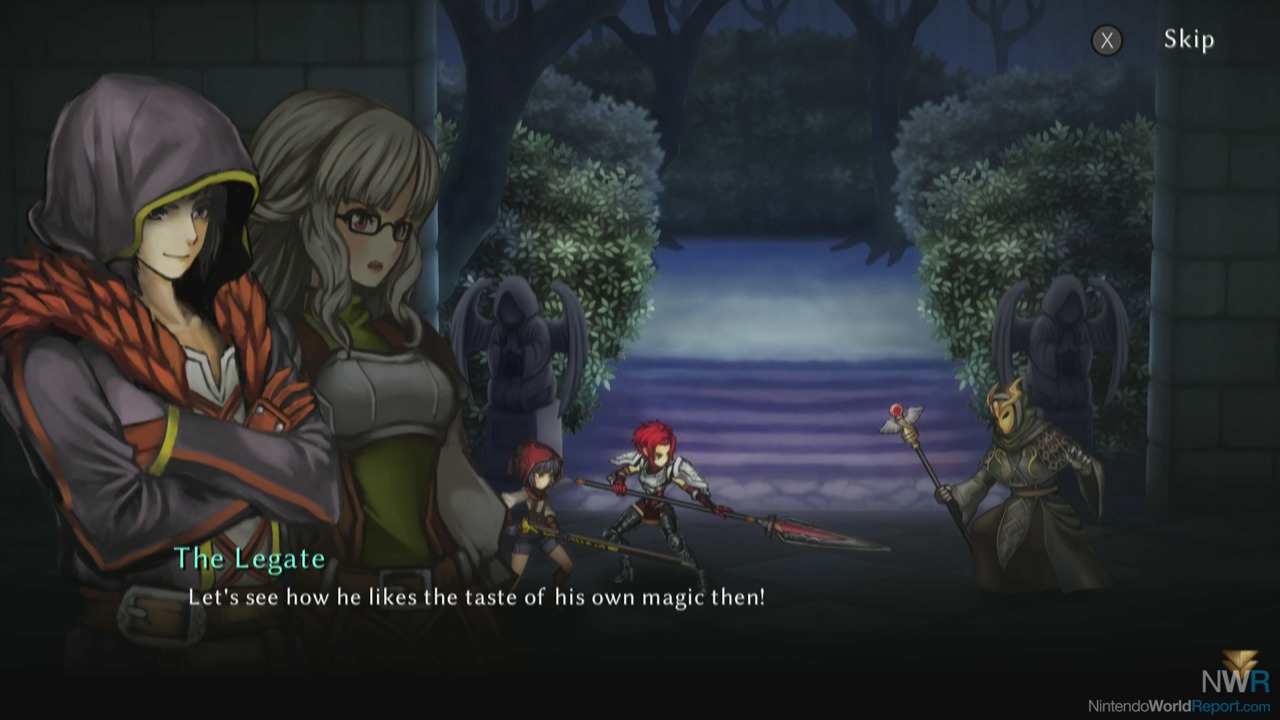 Leandur (left), and his enabler (right).

Fallen Legion is a neat game, but one that’s tough to explain. The combat is fairly simple on its face, but has a lot of intricacies that are fun to learn and execute, which makes it a shame only boss battles really take advantage. It features strong player-driven storytelling and a compelling cast of characters that evolve with the situation. It looks good, and sounds great. However, the slowdown can’t be ignored. At the worst of times it renders you blind. It can gate progress, and occurrences are is so predictable that this should have been fixed. Fallen Legion is a fun, but flawed. If you have the patience to learn these systems on your own, and a willingness to put up with moments of “play by instinct alone,” this game is worth picking up.

I am commenting for the benefit of James Jones, because he was lamenting on Twitter. I honestly have little interest in this game. I think it's a port from the Vita? The music sounds nice. I hope it finds success.