In the garage, where I belong, no one hears me sing this song.

It disappoints me to no end that I can’t recommend Garage. When it was first revealed in the Spring 2018 Nindies Showcase in March, I had very high hopes. It looked like it had the same fast-paced, top-down gameplay of Hotline Miami, only with more setpieces, boss fights, and a stronger narrative structure. Unfortunately, the end result is a disappointing mess. 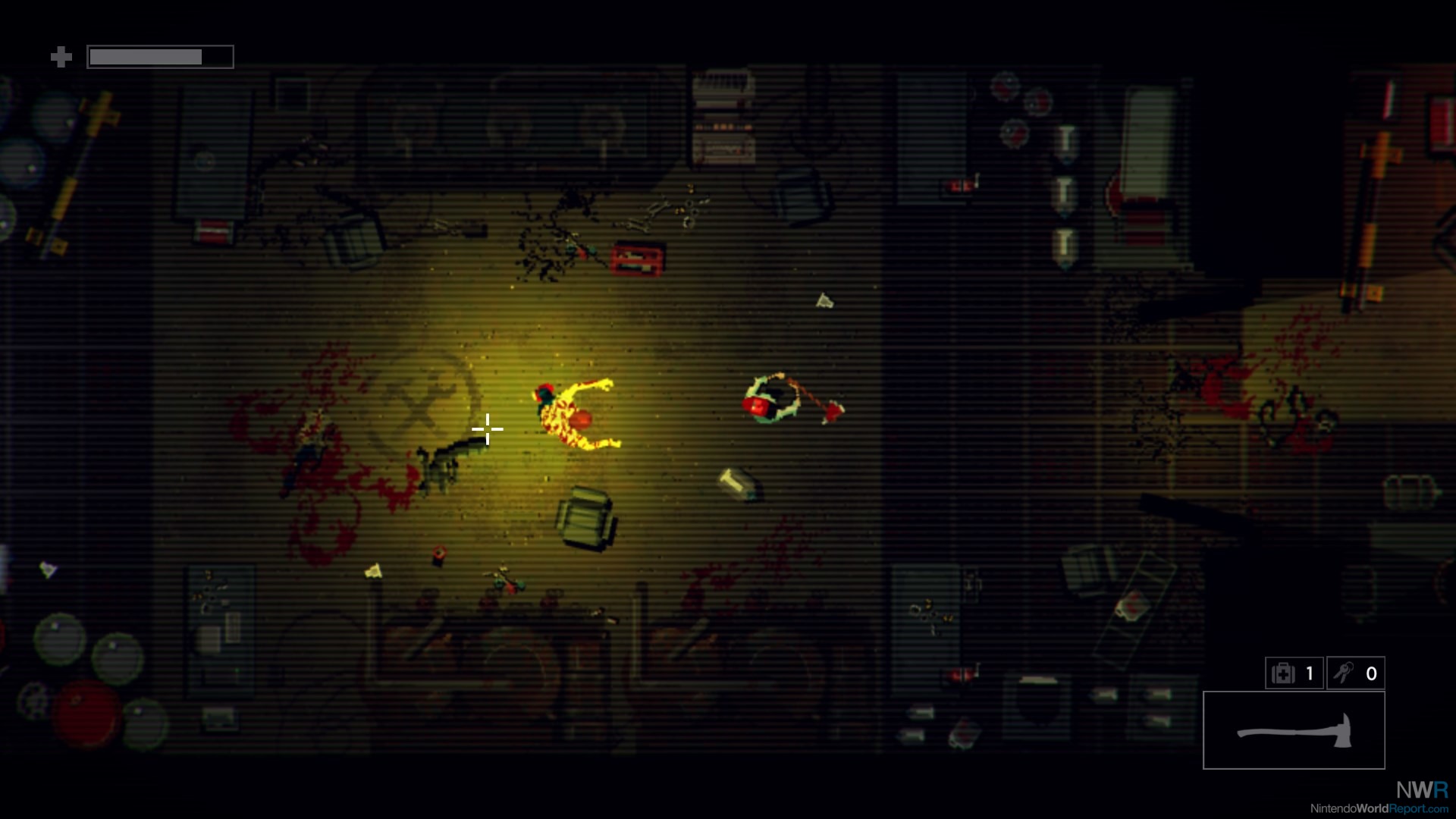 If you’ve played Hotline Miami, you have an idea of what the gameplay is about. Garage is a violent top-down, twin-stick shooter where you turn enemies into mush through a selection of guns and melee weapons. But while there are similarities here, it differs from Hotline Miami in a number of key ways. Instead of constantly picking up weapons and throwing them away, for instance, you have a persistent weapon wheel with guns you pick up over the game’s “13” chapters.

Garage also has a completely different setting and gameplay structure. Rather than going for an old-school Miami vibe, Garage takes cues from zombie B-movies. You play as a janitor (and ex-drug dealer) named Butch who gets into a zombie situation and has to murder tons of zombies (and zombie-like creatures) to get out of it. It also has a linear story progression, a number of one-off setpieces (cool drug trips and motorcycle jumps among them), and boss fights featuring big life meters.

The best parts of Garage are the ones that are all its own. The boss fights, which include a Human Centipede-like beast and an arena fight against a giant mutant general, are a lot of fun, and require consistent strafing and ammo management. The setpieces—special shout-out to one extremely trippy sequence at the end—really gives Garage a heart and personality I wasn’t expecting. Even the story, which is very dumb, has an enjoyable, movie-like charm in its dumbness.

Unfortunately, that’s where the praise ends.

Garage is extremely hard. Its easiest difficulty, which I played on, is probably equivalent to a “hard” difficulty in most other games. I’m convinced part of that difficulty came from its imprecise aiming. Its reticle is constantly moving back and forth (probably to simulate a PC-like control scheme), but it doesn’t work well with the right joystick at all. It feels like one in every three bullets hits its mark, and I say that as someone relatively experienced with this genre. The guns, as a result, don’t feel very good to use (barring the shotgun and energy grenades).

Garage also has a feature where enemies will only appear visible when your character has the ability to see them in-game. In other words, if you’re standing in one room, there’s a closed door in front of you, and there’s a room on the other side of that door, everything in the room will be visible to you except enemies. I appreciate developer Zombie Dynamics trying to do something different here and focus on the moment-to-moment action, but in doing this, it eliminates nearly all of the strategy that makes these top-down twin-stick shooters so much fun. Moreover, it’s confusing (and frustrating) to see a room’s layout, but not the enemies within that room. 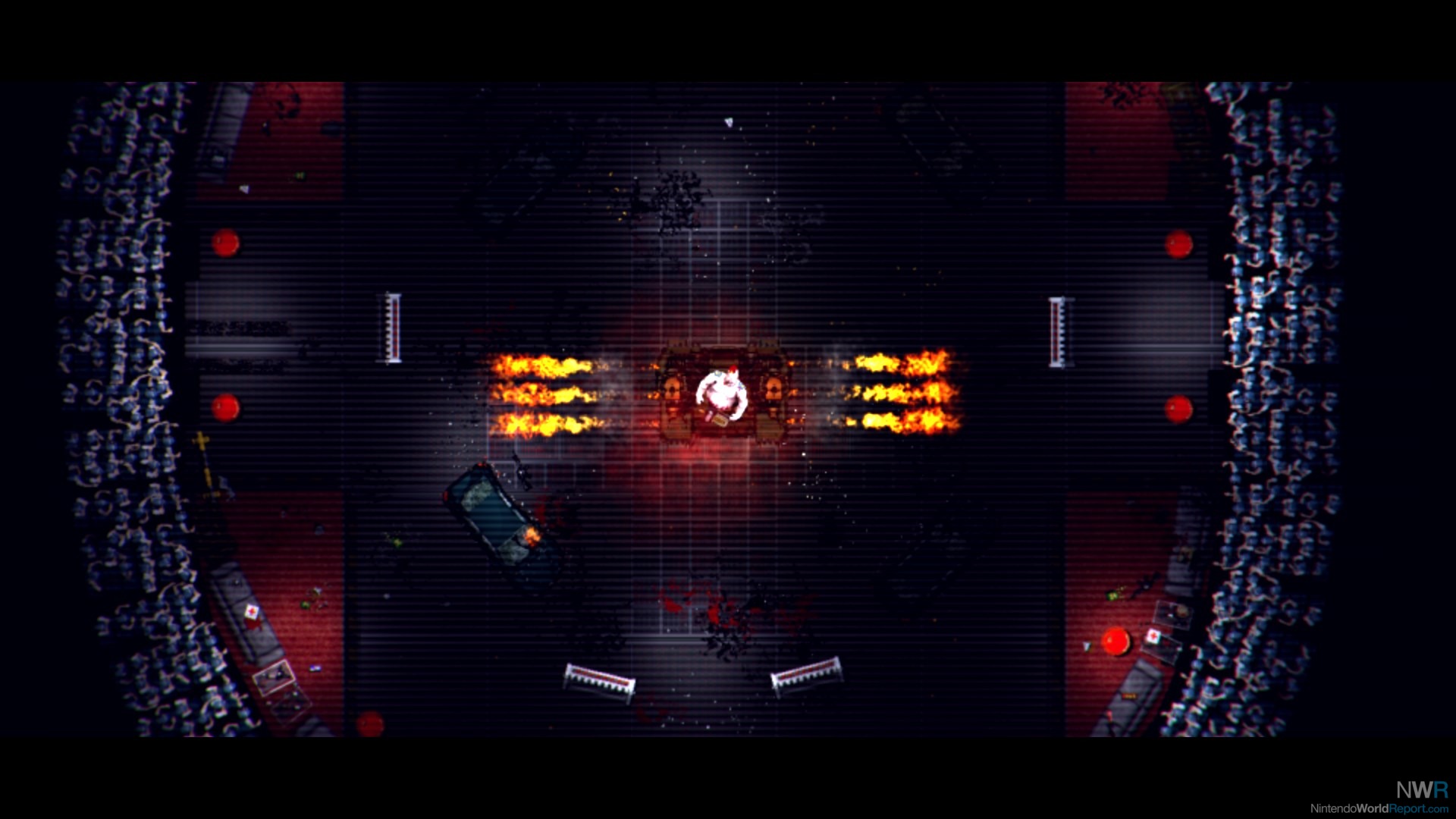 When I said the game had 13 chapters, you might have noticed that I said “13.” That’s because Chapter 10 is, and I mean this in the most literal way possible, missing. After beating Chapter 9, one of the bosses you recently beat corners you and begins to engage you in a chase sequence. At that point, a black screen with a letter from the developers pops up explaining that the code for the chapter was “irretrievably lost,” all the while promising what would have been “the best chase you’ve ever seen in your life.” I expect this from a game released on Early Access—not a video game with publisher backing.

Lastly, a couple other small issues. The game hitches for a second every time it autosaves, which really takes the wind out of the room when there’s a one-second pause in the middle of an intense scene. Then there are the load times, which are usually 20-30 seconds in length (regardless of whether the Switch is docked or not). Neither of these are particularly major, but when taken with the game’s other issues...it adds up.

Garage is a game that, to put it bluntly, feels unfinished. Everything from the less-than-tight gameplay (in a genre all about tightness and control) to its sloppily-missing Chapter 10 makes me feel Garage could have benefitted from more time in the oven. And it’s a shame the game came out this way too, because it has multiple positive aspects and the (missed) potential to be something greater.

Wow, I couldn’t disagree more. This game is dripping with atmosphere and is super tense. I also don’t find it that hard at all on easy. Have I died a few times? Sure but not nearly as often as Hotline Miami or Mr. Shifty. Frequent checkpoints help as well. I am at Ch. 8 and loving it! Right up there with Butcher as my favorite indie games on Switch.