Have you ever thought "I wish Super Metroid was a roguelike?"

A recent study [citation needed] found that 87% of Switch games are roguelikes. For reasons I can’t begin to fathom, the genre is experiencing a major revival on the platform, but with so many choices, it can be difficult to stand out from the crowd. Enter A Robot Named Fight, which Nintendo fans in particular should get a kick out of: it’s a 2D Metroid game, but in roguelike form. Like most entries in this category, A Robot Named Fight is at once intriguing and infuriating. It does not rise to the hallowed heights of The Binding of Isaac Afterbirth+ but it still manages to be a fun time. 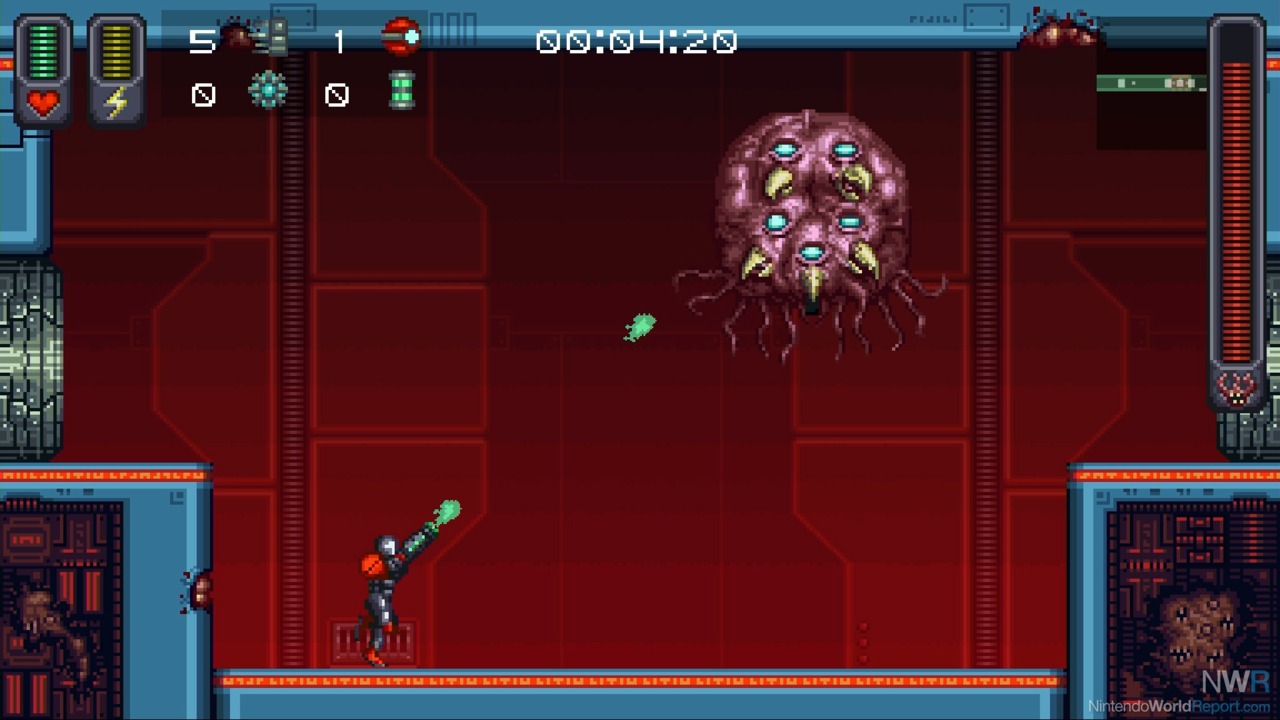 The story is simple: a planet of robots has been decimated by the arrival of a moon-sized orb of flesh that has produced a vast array of gross meat-based enemies. You play as a robot named…Fight (I really don’t like this game’s title) as it attempts to single-handedly stop the fleshy invasion. You start things off with just a normal arm cannon that’s not particularly powerful. You can run around, jump, and aim up or down with the ZL/ZR buttons. Rooms are randomly generated but the zone-by-zone flow appears to be fixed. A minimap in the upper right corner of the screen looks a whole lot like the minimap from Zero Mission. Rooms occasionally harbor upgrades to your speed, health, rate of fire, etc., much like the upgrades from Metroid.

Those upgrades are, of course, randomized, as are the major movement and weapon upgrades that make up the backbone of any halfway decent Metroid imitator. Sometimes you’ll find a rocket launcher, which is a great alternate weapon but can also open certain doors. You may also, instead, find a lightning gun or flamethrower. There’s a device that lets you shoot through walls. There’s a slide move and a surprisingly imaginative Morph Ball analogue. Most environmental barriers can be overcome by at least two separate upgrades, and although the rooms are randomly generated, they do seem to work with the upgrades you find along the way. 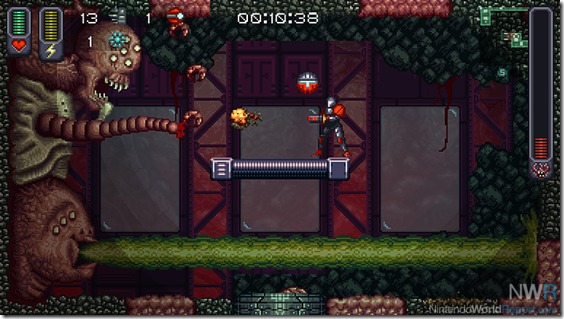 You will also find bits of scrap left by enemies and colorful relics that can be traded to infrequently encountered robot oracles who will either be pleased with your offering, offended by your offering, or won’t care either way. I haven’t worked out how their mood is determined—if they’re happy, they sometimes give you a useful item. If they’re offended, you tend to get a temporary or permanent stat drop in one or more areas. In general, I learned to ignore the oracles because the cost of displeasing them was too high. You’ll also find item and weapon-building allies and the extremely rare one-time-use save room.

One thing I do appreciate about A Robot Named Fight is that you are constantly unlocking new equipment, which is then added to the item pool. This is one of the main reasons I fell in love with The Binding of Isaac as I always felt like I was being rewarded for playing. It’s a similar feeling here, and motivates me to continue playing, fighting (sigh) to get farther. However, this game is missing something that Isaac does extremely well: the incredible feeling that comes from becoming an unstoppable force of destruction in maybe 10% of your runs. Maybe I just haven’t unlocked the right items yet, but I never feel especially powerful in A Robot Named Fight. I have yet to go into a boss fight knowing that the battle will be over in five seconds. It’s a feeling I miss. 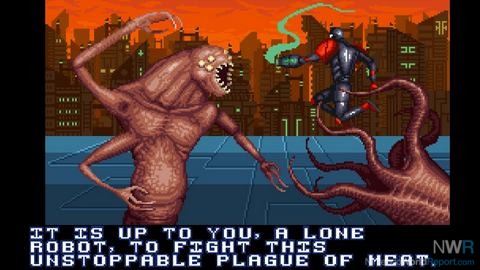 One problem is that game is not balanced very well. Health upgrades are woefully rare so I agonize over every hit. Boss encounters are rare, but I usually feel like I’m going in underpowered. And truthfully, I die a lot, not just from boss fights but also hard-to-see enemies, spikes, rooms with high temperature, that one bullet that I didn’t notice, and my personal favorite—complete darkness. Certain rooms are completely black, and trying to move through them just results in a lot of unavoidable damage and (eventually) death. Now, there is an item you can eventually find that acts like a lantern in these areas but if you don’t have that lantern, you’re kind of screwed, so maybe turn around if you enter a blackened area.

The game looks great, with a similar aesthetic to an SNES game. The robotic protagonist, who I refuse to call “Fight,” changes a bit with certain upgrades, which is cool. The meat monsters are interesting and generally gross, but their designs tend to repeat before too long (with minor differences). Bosses are a real highlight—typically large amalgamations of body parts. Thankfully, each zone has its own pool of bosses, again like Isaac, to keep things fresh. The music, while catchy, isn’t on the same level. Tracks tend to have short loops and since zone-specific music doesn’t change, you’ll be hearing the same tracks more often than you might like.

A Robot Named Fight is an interesting roguelike, combining that genre’s pros and cons with what’s essentially a Super Metroid framework. While I suspect your mileage may vary, I can’t deny that it’s a fun, if imperfect, experience.

Stacked attack speed upgrades, triple shot and usually some big, piercing or fragmenting shots can turn the whole screen into a wave of death that crushes everything in your path. It's certainly gotten rarer since the introduction of bullet speed upgrades (which are apparently meant as dud upgrades to dilute the pool a bit) but sometimes you do end up with a combination that makes the screen look like Bangai-O.