A memorable and fun remaster of a SNES classic that is mostly worth diving into.

Wild Guns Reloaded is an oddity. The original incarnation dates back to a 1994 Super Nintendo release that was generally well received and over the years, fell firmly into cult classic status. Thanks to Virtual Console, the game resurfaced on Wii and Wii U, which led to members of the original development team at Natsume to update and upgrade the peculiar blend of shooting gallery and action with out-there space and western theming. 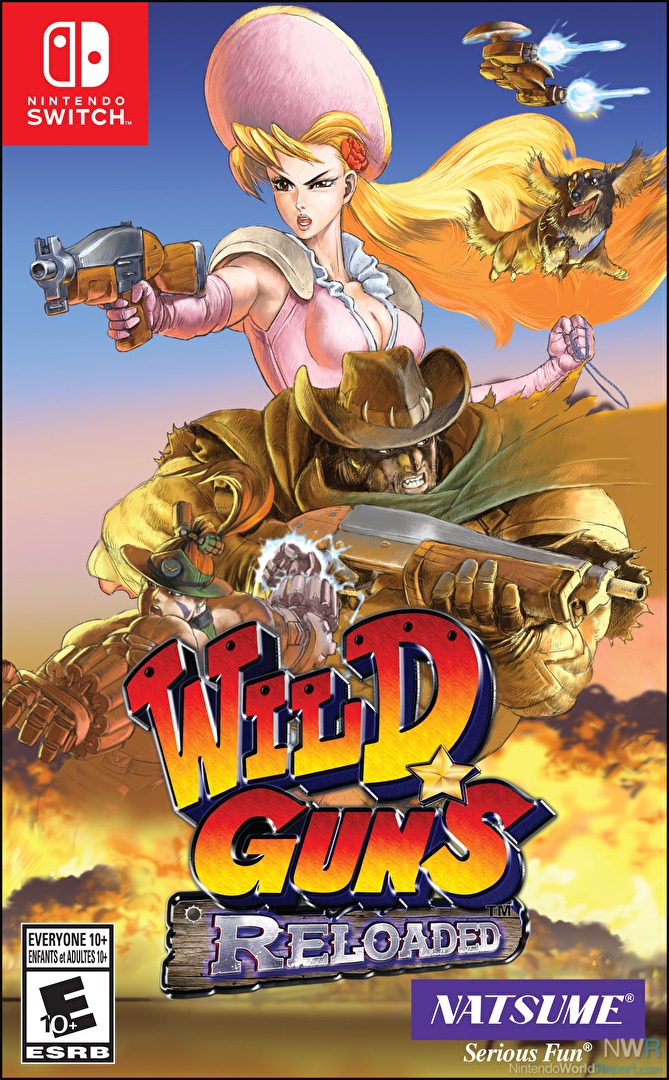 The way it works is you pick your gunslinger, from the original duo of Clint and Annie or the newcomers bomb-wielding Dorris and spacedog Bullet. What follows is a series of single-screen stages where you fire at the enemies in the background while deftly avoiding fire in the foreground. Each stage is made up of a few different settings, generally consisting of two screens and then a boss fight. It’s hard to grasp at first, especially as the game lacks any firm tutorial. Attacking the game initially without prior experience led to a whole lot of deaths, even on easy difficulties since it’s a punishing one-hit death type of game. Wild Guns seemed to demand too much from me and I wasn’t having a great time, even in the four-player co-op. Then with some help from the game’s attract mode, it all started to click.

Making liberal use of the dodge roll, I started to slam on the fire button and danced around the screen when enemy fire started raining down. I learned the mechanics and level patterns and got over the hump of figuring out how to progress in this weird arcade-influenced adventure. The battles became tense and the large screen-filling bosses were fun challenges. Wild Guns does a very good job of layering types of enemies on top of each other. Throughout the eight stages, the enemies are a wacky mix of standard cowboy fare and ridiculous sci-fi-influenced robots and machines. They’re all well designed and as you face them, it’s easy to learn their attacks and tells. The end-game relies heavily on using all your accumulated knowledge to ward off massive onslaughts of foes. Speaking of the end-game, the lack of any kind of saving means this all needs to be beaten in one sitting. It's not terribly long, but the difficulty makes the stage repetition whenever you come back to the game irritating.

As for the playable characters, Clint and Annie controlled similarly, as they stop moving when firing but nimbly dodge with the press of a button. Dorris can be a bruiser, as holding down the fire button builds up multiple bombs to throw. She does more damage but at the expense of mobility and expediency. Bullet is a dog with a spaceship partner that can lock onto an area of the screen and fire while freely moving back and forth. Bullet is the easiest to get used to, especially since the dog’s design seems to break some challenges in the game that were meant for the stationary shooting of Clint and Annie. You have three solid character archetypes, which helps alleviate some of the frustration because sometimes picking a different character will make a level a little easier.

Reloaded sticks to its old-school roots, often to a fault. You only have four one-hit lives before you hit a game over, which can be brutal as you’re learning the game. Multiple difficulty options, including a gentler Beginner mode, helps make it a little more palpable, but it’s still tough. That degree of difficulty combined with the peculiarity of the controls and design makes it a harder sell for co-op fun than I hoped. Pair up with a group of players who know how to play and it’s great. Team up with neophytes and it can end in tragedy. If you are of the hardcore Wild Gun ilk, Reloaded is spectacular and a great fit for Switch. The game ran smoothly both docked and undocked and also includes a hard-as-nails Boss Rush mode.

Wild Guns Reloaded is a great revival of a lowkey Super Nintendo game in a genre that you don’t see much anymore. The game might be dated in some respects, with a punishing difficulty and steep initial difficulty curve, but it’s worth powering through to learn the intricacies. Aside from that, since it does have an arcade background, it’s a tiny bit on the short side with the only carrot on the end of the stick being online leaderboards. Wild Guns Reloaded might still sidle into cult classic status on Switch, but at least if you do dive into it now, it’ll be with the novel new characters, stages, and polish.

Already have the original 3 times over. Might grab this on a sale.