A roguelike Bomberman? Why hasn't anyone ever thought of this?

The elevator pitch for Bombslinger is simple: it is a roguelike take on Bomberman gameplay with tons of weapons, abilities, and upgrades to collect and utilize on every playthrough. Not necessarily being a huge Bomberman fan myself, I didn’t know what to expect when I started the game. Five minutes in, however, I had a smile on my face that wouldn’t go away. Through it’s fantastic and rewarding upgrade system, hard but fair gameplay and charming aesthetic, Bombslinger ends up being a fantastic roguelike - and one of the best on the system so far. 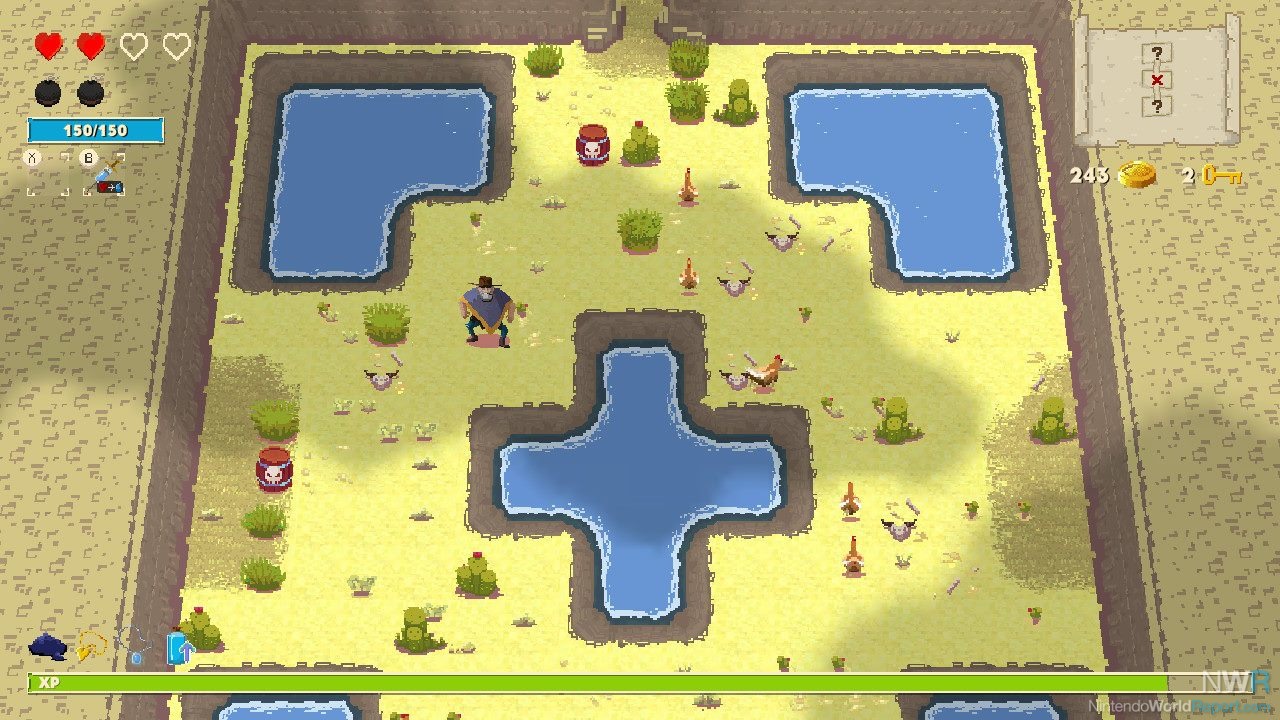 The story definitely adheres to the classic K.I.S.S. (Keep It Simple, Stupid) approach to design. The titular hero’s house has been burned to the ground and unfortunately his wife was killed in the act. Now, with the aid of infinite bombs at his disposal, the appropriately named “Bombslinger” is out for blood to avenge his deceased spouse. Along this journey you’ll meet funny characters and outrageous bosses, all that are nothing a few bombs can’t handle.

Keeping to a western theme, the visuals have a cool look to them. By cleverly using 2D sprites on top of 3D models, the game for the most part looks like an old-school top-down Zelda. Upon entering shops and boss rooms, the camera moves and zooms - showing that everything is actually all in 3D. The music is your typical tumbleweed-western style (complete with low electric guitar riffs and harmonica) with some hard rock mixed in that can get pretty intense. While not amazing, it gets the job done and sets the mood well for a cowboy pursuing a vendetta. 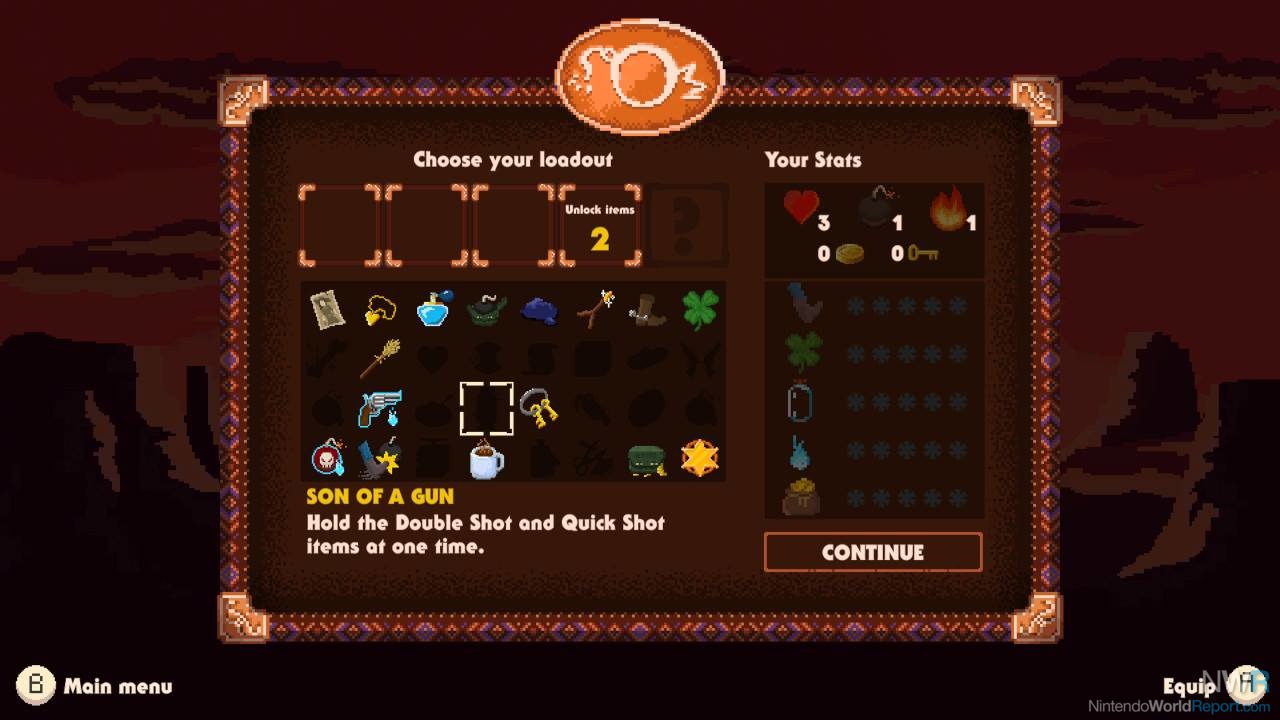 The best part of Bombslinger hands down is the aforementioned upgrade system. At the beginning, you have the option to choose just one enhancement to aid you on your quest. These range from adding an extra heart to your health to an extra life. However, when completing certain tasks during a play through the player can unlock many other and more powerful enhancements that can be real game changers for each round - and the best part about the whole system is just how simple, clean and intuitive it is. The more little achievement-like challenges the player completes, the more slots are available to use before starting a game. As you might imagine, this can make the Bombslinger a powerhouse before even the game begins.

But the upgrades don’t end there. Throughout each bomb-slinging run the player constantly gets random upgrades either in treasure chests, in shops, or by leveling up using experience points gained by killing enemies. The combo system helps you rack up more XP by killing multiple enemies at once, and this can be made much easier by the use of certain upgrades. When leveling up, the player has a choice of three enhancement options, letting them tailor their gameplay to their own style. Some of these upgrades even give you straight-up new abilities that completely change how you can play the game, along with the discoverable subweapons.

Yes, besides using your trusty bombs, sub-weapons are also randomly scattered throughout each of the four areas. These vary greatly from simple obstacles to trap enemies to amazingly powerful weapons to help gain the upper hand. Discovering each of these and experimenting with them was very exciting for me, as I never knew what was going to come up next. 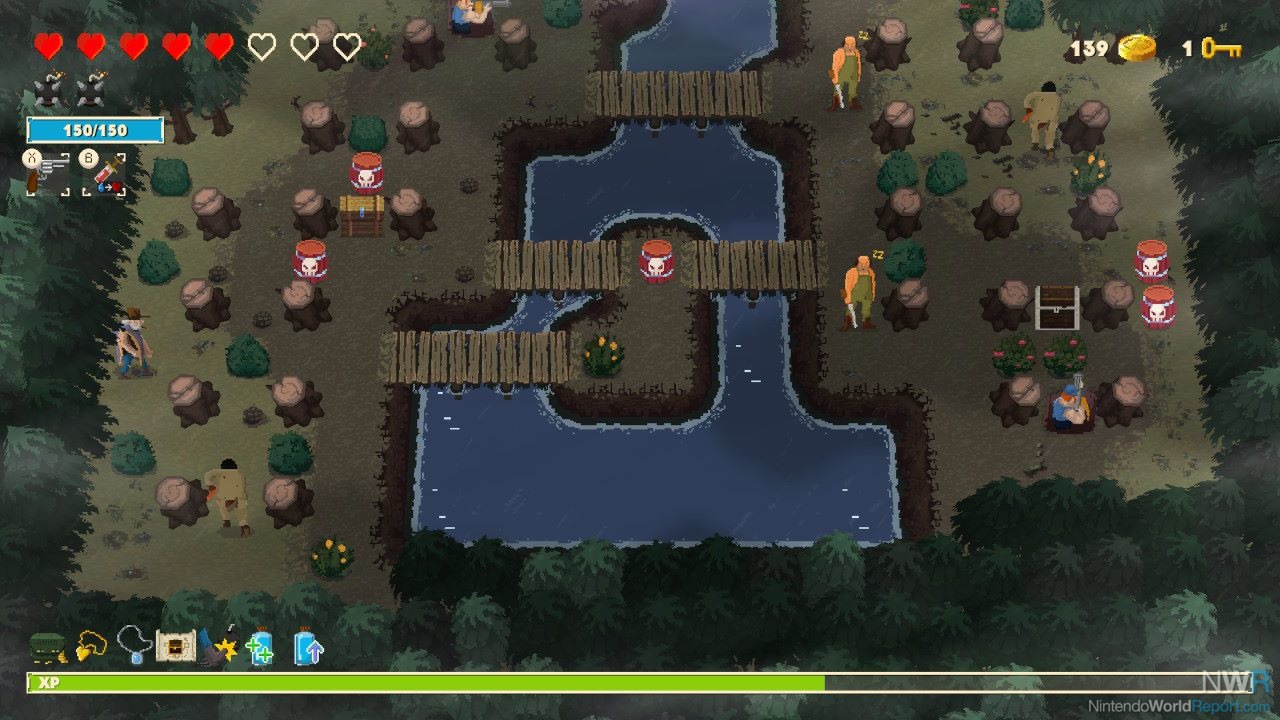 The multiplayer mode included is about what you’d expect from your standard Bomberman game, which is not a bad thing. Up to four friends (or CPUs) can get together to play either a Deathmatch or Last Man Standing match set inside 12 different maps. The gameplay doesn’t vary too much from the single player campaign with the main change being that upgrades to your character drop much more frequently on the map, creating quite the frenzy of a battle indeed. While not the most groundbreaking experience, any time a game can add in a fun multiplayer mode for my friends and I to enjoy is a good play in my book, and we ended up having a great time.

With the combination of the easy-to-learn upgrade system, charming aesthetic, and simple tried and true gameplay, Bombslinger completely hooked me in every way. When I started it up for the first time, I had no idea that this seemingly simple Bomberman-like game would have such well implemented depth and addicting gameplay to keep me coming back for more. The whole setup allows every player to adjust the game to their own play style, and while at first it can seem very punishing, the upgrade system and newly learned strategies beckon for “just one more playthrough.” On top of that, the frantic multiplayer mode included is a great bonus for a quick session with friends, not to mention being a perfect game to play on the go. So if you are a fan of satisfying roguelikes, you definitely won’t want to miss out on Bombslinger.