When I found out that Attack on Titan 2 was coming to Switch without the inclusion of the first game, I was a little confused. Isn’t this game supposed to be based on Season 2 of the anime? I should have known better.

Like some previous Omega Force anime action game sequels (Fist of the North Star: Ken’s Rage 2 comes to mind), Attack on Titan 2 retells the complete story from the first game (which covers Season 1) as well as the story of Season 2. The Season 2 story, however, represents the last quarter of the game at most, meaning that if you played the first game, you’re going to have to deal with roughly eight hours of story all over again. As a Switch owner playing this game (and game series) for the first time, I’m in luck. 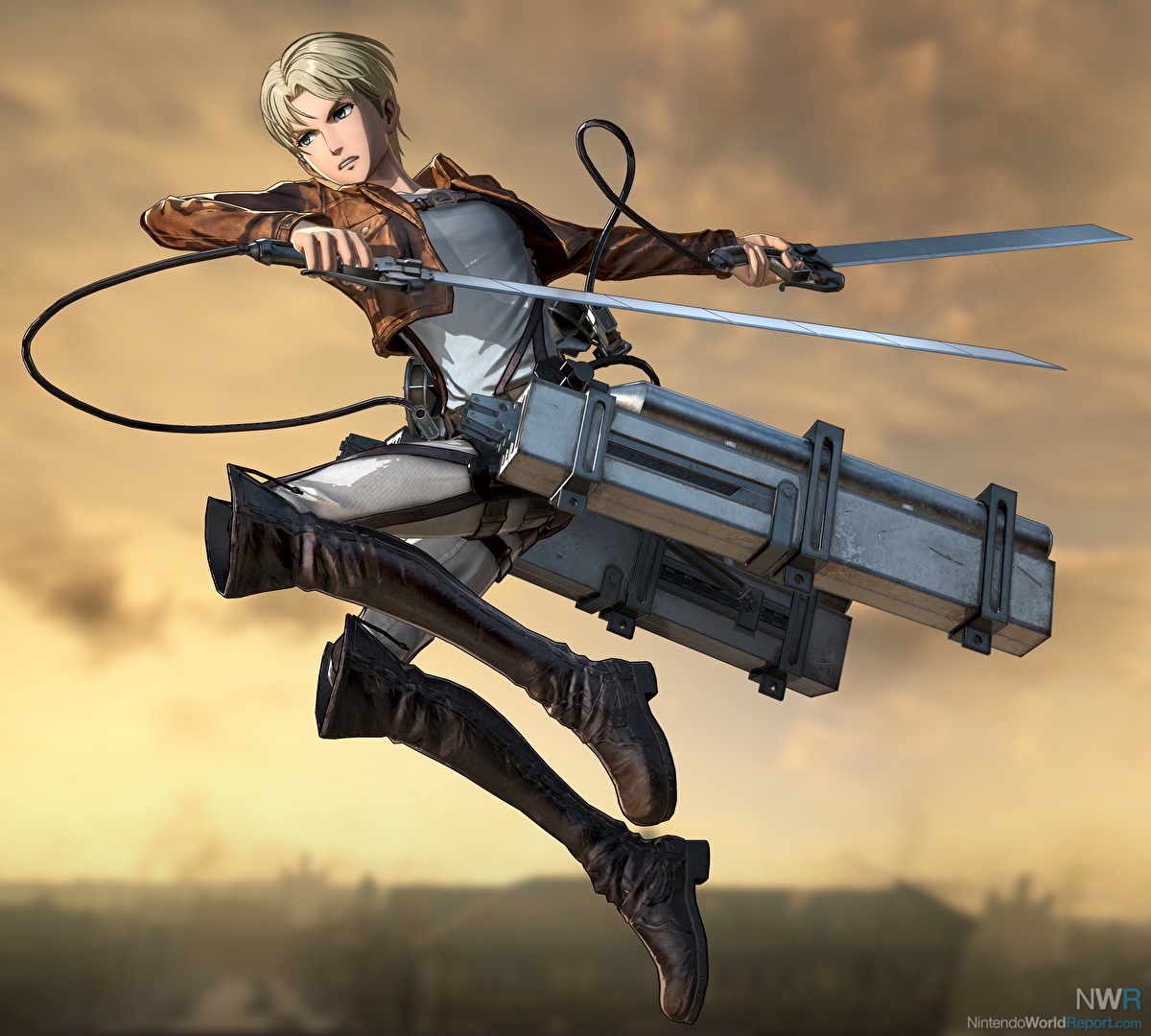 Unlike many of the Warriors-style games that Omega Force has developed in the past, Attack on Titan 2 is one that offers a good bit more diversity than the tried-and-true “kill hundreds of enemies with ease”-style gameplay. Here, you’re tasked with killing a far smaller number of the series’ giant antagonists, the titans.

To do that, you zip around on your Omni-Directional Mobility gear using the Y button to surround and attack the beasts, almost like a more limited version of the web-slinging in the old Spider-Man games. It does feel a bit clumsier—or at least harder to use—than those old games, but I don’t knock the game for that because it controls exactly how the show portrays it.

While you’re zipping around, titans of various shapes and sizes wander around the map, and it’s your job to kill them by slicing the back of their neck. You can also target limbs to slow them down, but unless you’re playing in a higher difficulty, it’s pretty easy to go most of the game by going straight in for the kill without worrying about other body parts.

It’s not just about zipping and slicing necks. Some other mechanics crop up as well, like stealth attacks from afar, as well as a fun teamwork mechanic where you kill titans alongside characters in the show. Other variables during missions include weapon and gear degradation, very light base building, and side missions where you kill other, less story-critical titans for rewards.

But for the most part, outside of some exceptions, a lot of the core gameplay involves zipping and slicing repeatedly, even if sometimes you’re doing so while escorting enemies or saving a bystander in need. The gameplay is fun at times, especially when some of the more mechanically diverse titans come out, but the game falls victim to significant repetition at parts. That said, It’s far less repetitive than many Omega Force games (especially once the story gets going), so it certainly has that going for it.

The story represents both Attack on Titan 2’s biggest strength and biggest weakness. As you go through the story, you play as a character-created trainee who just happened to be there for all of the crucial parts of the show. The story is mostly told through first-person cutscenes that convey the anime plot extremely well; I especially enjoyed the cutscenes where your character uses the Omni-Directional gear in first-person. 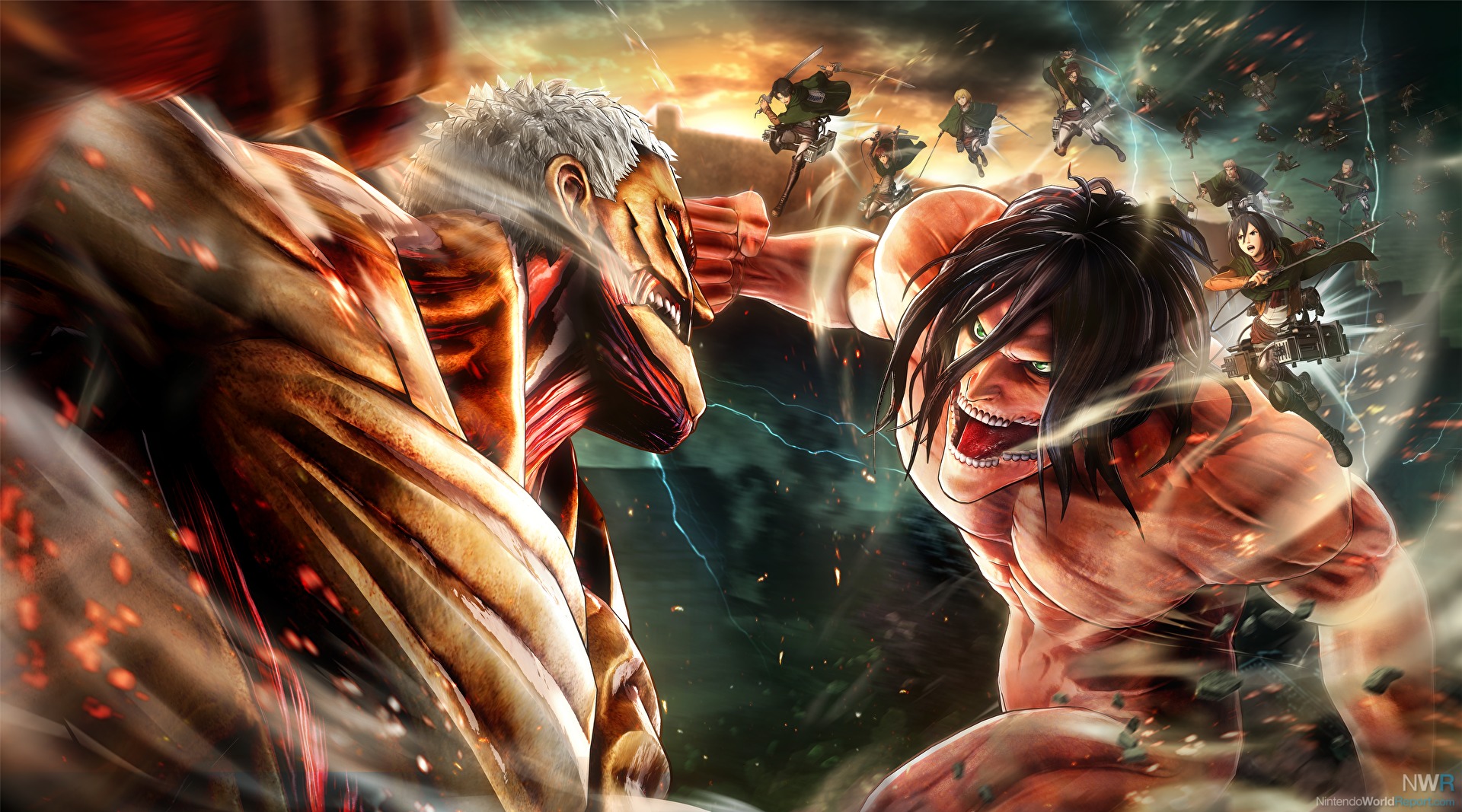 The problem is everything outside the cutscenes. The story is moved along by talking to characters and gaining Persona-style relationship points by choosing the right basic, nice-guy speech option. You also use this between-mission time as an opportunity to upgrade your weapons and gear using a very basic material-crafting system. Too much uninteresting non-cutscene dialogue makes it a chore to pay attention to. It just moves so slowly, and more of this connective content is boring than not.

Outside of the story mode, “Another Mode” lets you can play as various characters from the show in a number of non-story missions. It’s a good ‘one of those’ kinds of Omega Force modes, but there’s not much to say about it other than that.

Attack on Titan 2 is a generally decent Attack on Titan game. The mechanics and cutscenes capture the essence of the show quite well, making it one of the less-one-note Omega Force games I’ve played. Unfortunately, the story moves at a plodding pace, and the game falls into more unfortunate strides of repetition than I’d hoped for. It could be better, but as 3DS’s Humanity in Chains taught us in 2015, it could also be much worse.