Metropolis: Lux Obscura is easy to describe: it’s a motion comic interspersed with Puzzle Quest-like fight sequences, all set to the tune of a thinly-veiled homage to Sin City. The protagonist is kind of a combination of Marv, Hartigan, and Dwight (if you’ve seen the movie) and is freshly out of the slammer trying to track down an old stripper friend named Goldie. He visits a strip club where a dancer named Bliss helps track Goldie down. Meanwhile, there’s a violent, womanizing senator’s son threatening a woman and her daughter who Lockheart can try to save. In all this, Lockheart battles street thugs, bouncers, an Elvis impersonator, actual dogs, and the fuzz on his way to four possible endings. 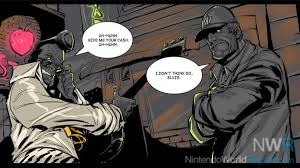 For what it’s worth, the art in Metropolis: Lux Obscura is gorgeous. Hundreds of separate drawings form the backbone of the game’s characterizations and atmosphere. The art has a J. Scott Campbell feel to it, if J. Scott Campbell were to take a swing at Sin City. Being a motion comic, there’s minimal animation but it works. The game also has impressive voice acting (for the most part) and the storytelling is usually good. There’s definitely a “best” ending, although I can’t say it’s very uplifting.

You can usually select what part of town Lockheart visits, which influences the story’s progression, and there is the rare occasion where you get to choose what to do during a story sequence. The bulk of the gameplay, however, takes place during brawls, at which point Metropolis turns into Puzzle Quest.

It’s a typical match-three tile game, where the icons represent attacks, stat boosts, health, or police encounters (avoid that last one). Most enemies give you several turns to rack up damage before landing their own blows. This is fun in theory but it is not Panel de Pon. Here, you can only move one tile per turn vertically or horizontally, which counts as a single turn, and you have to make a match every turn. This effectively means you can’t set up chains or get your tiles in a strategically favorable position. When chains do occur, it’s thanks to providence, not skill. You’re going to lose a lot. Restarting the match happens quickly but if the tiles aren’t cooperating you’re just beating your head against the wall.

Metropolis’ solution is to offer you a choice of permanent modifiers for future brawls every time you win a match. You can make more health tiles appear, increase the damage done by fist-based tiles, potentially turn police tiles into stat boost tiles, etc. These are great but almost always based on an invisible D10 dice roll—stacking the same mod just widens the success window. Mods are not going to help you if you need to match some damn health tiles but they’re nowhere near each other on the board. I eventually got used to the flow of combat (it helps that there’s no timer) but it often feels like you don’t have much control.

However, the game is very short, and you shouldn’t have much trouble seeing all four endings within a few play sessions. The art and voice acting carried me through the Puzzle Quest bits. I should mention that the game is loaded with adult content. Oh sure, there’s drinking, smoking and cursing, but there are also topless strippers and at least one surprisingly graphic sex scene. How graphic? Well, Lockheart might want to think about manscaping. I will say I’ve never played a game like Metropolis: Lux Obscura and I’m glad I did, but I think it has narrow appeal. If you like Sin City, it’s worth a look.