Even Peter Pan would stay away from this Neverland.

WorldNeverland - Elnea Kingdom is a game that bills itself as “simulat[ing] the lives of the people who live there finely.” The game is peppered with awkward English, grammar errors, and weird names, but these are the least of its problems. WorldNeverland is a life-sim, role-playing game filled with things to do, calling to mind titles like Stardew Valley and the Rune Factory series. These games, however, are significantly more polished and fun. Imagine an Olympic-sized swimming pool consisting entirely of a shallow end: that’s WorldNeverland.

Developed and published by althi Inc., WorldNeverland was originally released on mobile in 2016 as a free-to-play game with in-app purchases. Many such games are known for not requiring a player’s full attention, and such is the case here, too. The Switch version is easy enough to control and play, making use of all of the Switch’s buttons, but the Pro Controller is not currently supported, nor are touch controls. 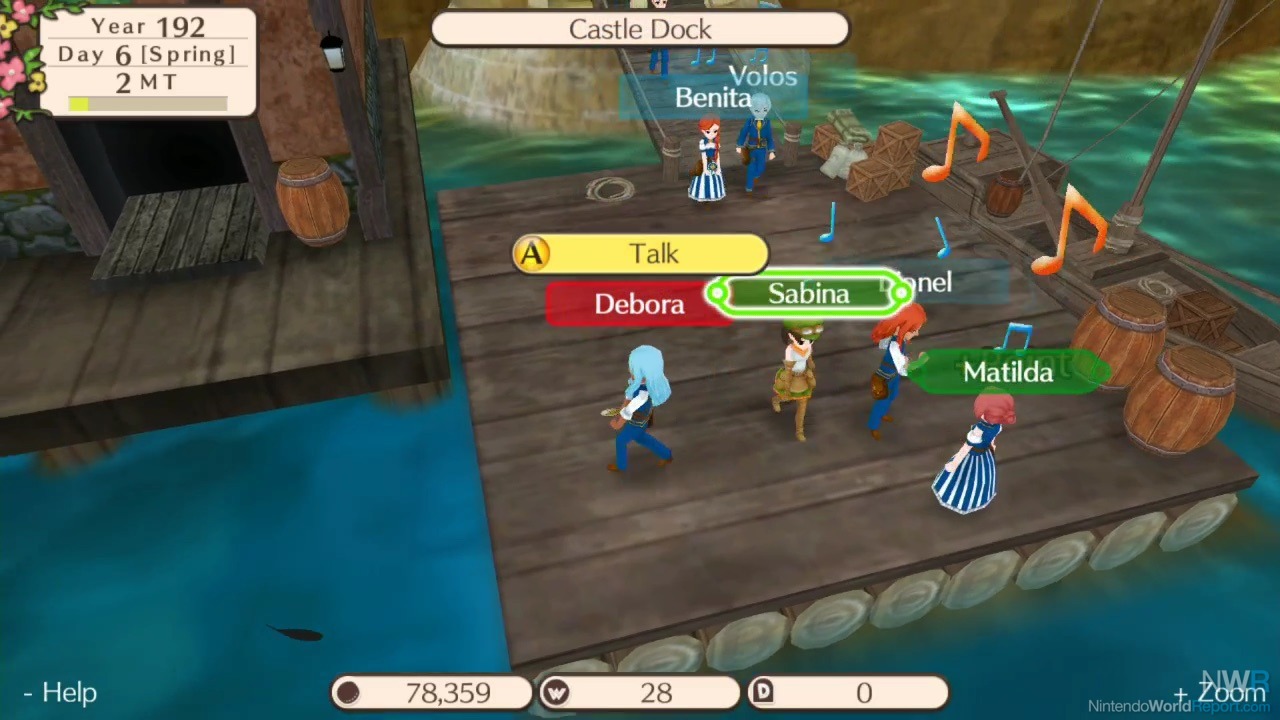 After using the rudimentary character creator to craft an avatar, the player is dropped into the middle of a seemingly large world and given basic gameplay instructions from the tavern owner, Wiala, who also plays the role of quest-giver. Wiala is your main point of contact for the beginning of the game as she doles out tutorial quests meant to introduce the various areas and aspects of WorldNeverland. Unfortunately, a number of the mechanics, statistics, and finer points are left up to the player to learn. After the first handful of quests, it becomes clear that although there are many different activities to do in Elnea Kingdom, few of them are enjoyable or meaningful. Without a story to tie your endeavors together or propel you forward, the game eventually loses steam.

One glaring issue is the inaptly named “fast travel” system. For many of the quests and map locations, you can press a button that allows you to automatically reach your destination; however, you are forced to watch your character actually walk to their goal (including load screens between areas) rather than simply teleporting or warping to the designated area. This “auto travel” might have been worthwhile if the game world and characters were at all visually appealing, but the graphics look like they belong on the 3DS, if that. Ironically, the fast travel mechanic is both a waste of time and a necessity. Many areas of the kingdom look the same and quest goals can be confusing or vague; it is frustrating to only sometimes have the fast travel option at your disposal. 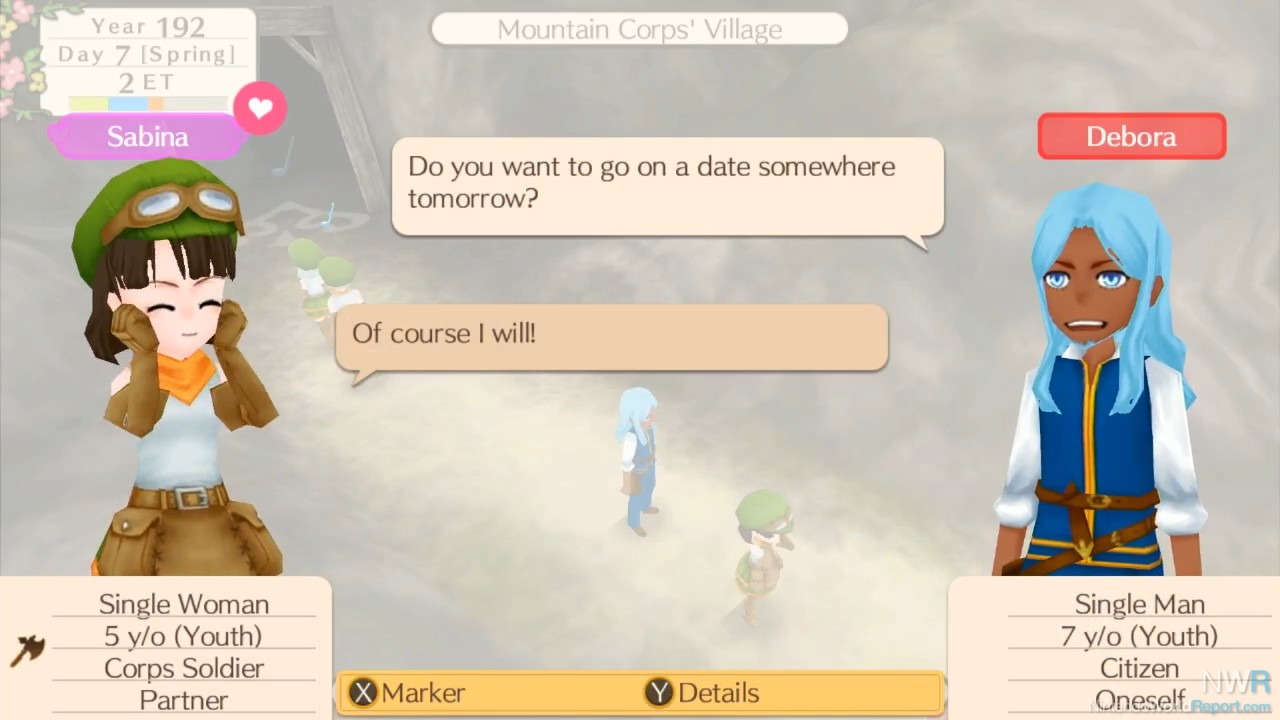 Non-player characters (NPCs) can be interacted with in a variety of ways, but nothing is deep or interesting. NPCs sometimes fill the screen but at other times are nowhere to be found; what’s worse is that they all basically look the same. When you do strike up a conversation, the dialogue is banal and boring. Whenever I chose to ask “Where are you going?” the response was usually a comically simple “Just over there.” After speaking to an NPC a handful of times, you have the option to become friends, which allows you to fast travel to their location, but only if you have a particular item. Without a different and even rarer item, you also can’t advance the clock until the day is 75 percent over, each day lasting 16 real-world minutes. In a paid game with set appointment times and waiting for crops to grow and events to happen, requiring an item to fast travel to people is a nuisance; needing one to move time forward is just absurd.

With enough persistence (and patience), you can form a romantic relationship with an NPC, get married, and have children. One of the cutscenes for these interactions showed my character and his partner standing in front of “Lucky Tower” (subtle, right?) staring ahead blankly as they confessed their feelings to one another. The scene couldn’t have been more devoid of emotion. One neat concept in terms of the relationship aspect is that when your character dies, you take over by playing as one of your children, but the effort required to get to this point may not be worth the reward.

The farming, fishing, and gathering aspects are all very basic and require little thought on behalf of the player. Seemingly all goods that you collect can be sold/deposited at any of a number of stores, and doing so rewards you with work points, one of many stats in the game. Work points contribute to your overall pay at the end of each in-game year, which frustratingly means you need to play a full year in the game to reap what you have sown. Adventure points are earned by venturing into dungeons where you can collect items, find treasure, and defeat monsters. Combat in these dungeons is incredibly basic: you choose from a few different skills requiring a certain percentage of your stamina or CP. There are no attack animations at all, and your character automatically walks through the straight-line dungeon. Every activity you do in WorldNeverland just feels exceedingly simplistic and vapid.

Job classes, daily quests, and challenge dungeons all add breadth to the game. For those looking for something simple that isn’t overly taxing, you may find more to like about WorldNeverland. In-game achievements give the player another reason to explore the game world, but you are really just checking off boxes rather than completing meaningful tasks. Other games that have come before WorldNeverland have elements that make simple and repetitive gameplay fun. Animal Crossing and Harvest Moon, in addition to the titles mentioned earlier, are life-sim games that have color, charm, and wit. You won’t find any of these elements in Elnea Kingdom. I can’t recommend this game on Switch, but try the mobile version to see if this game is worth your time and money. WorldNeverland is far too ambitious. Like Macbeth who “must fall down, or else o’erleap” his competition, WorldNeverland falls. Finely.

I understand your extensive review, but something about this game still calls to me...

It reminds me of a particular genre of user-created map in StarCraft and WarCraft III which I know as "Open RPGs". Essentially, these user-created maps were a setting with towns and monsters and mechanics... but the players were placed there sort of without an objective. So you sort of went into a functioning world and... decided what your goals would be that you'd work towards. Sort of a low pressure experience, but with gameplay mechanics to shape anything you DO decide to do.

I'll admit the game's current price IS higher than I feel comfortable but... I can't stop thinking about it @_@

It may be that this "Open RPG" you mention is exactly what the devs were aiming for with WorldNeverland. I just rarely found any of the game activities fun to do. Meaningful progress is also largely absent.


What's more, we have so many really fun and charming entries in the life-sim genre that I would easily recommend over this game.


To scratch that itch you're having, play the free mobile version!

How awesome is it that some Switch games have free "demo" versions on the phone we can try out! ^_^

Voez, for one, made a GREAT impression on me and is one of my favorite early purchases on the Switch despite being a Mobile-to-Console port!