This brutally tough roguelike shoot-’em-up is not for the faint of heart.

The Switch is quietly becoming the go-to place for roguelikes and shoot-’em-ups alike, and with the release of Steredenn Binary Stars, we see the two fused together to create a brutally tough yet rewarding 2D side-scroller. While it doesn’t jump off the page visually and the music quickly becomes grating, the core mechanics and power ups are satisfying enough to continuously smash your head against the wall as you slowly make progress from run to run. While the ruthless difficulty will certainly be enough to turn off some, it becomes increasingly gratifying for those who choose to embrace it. 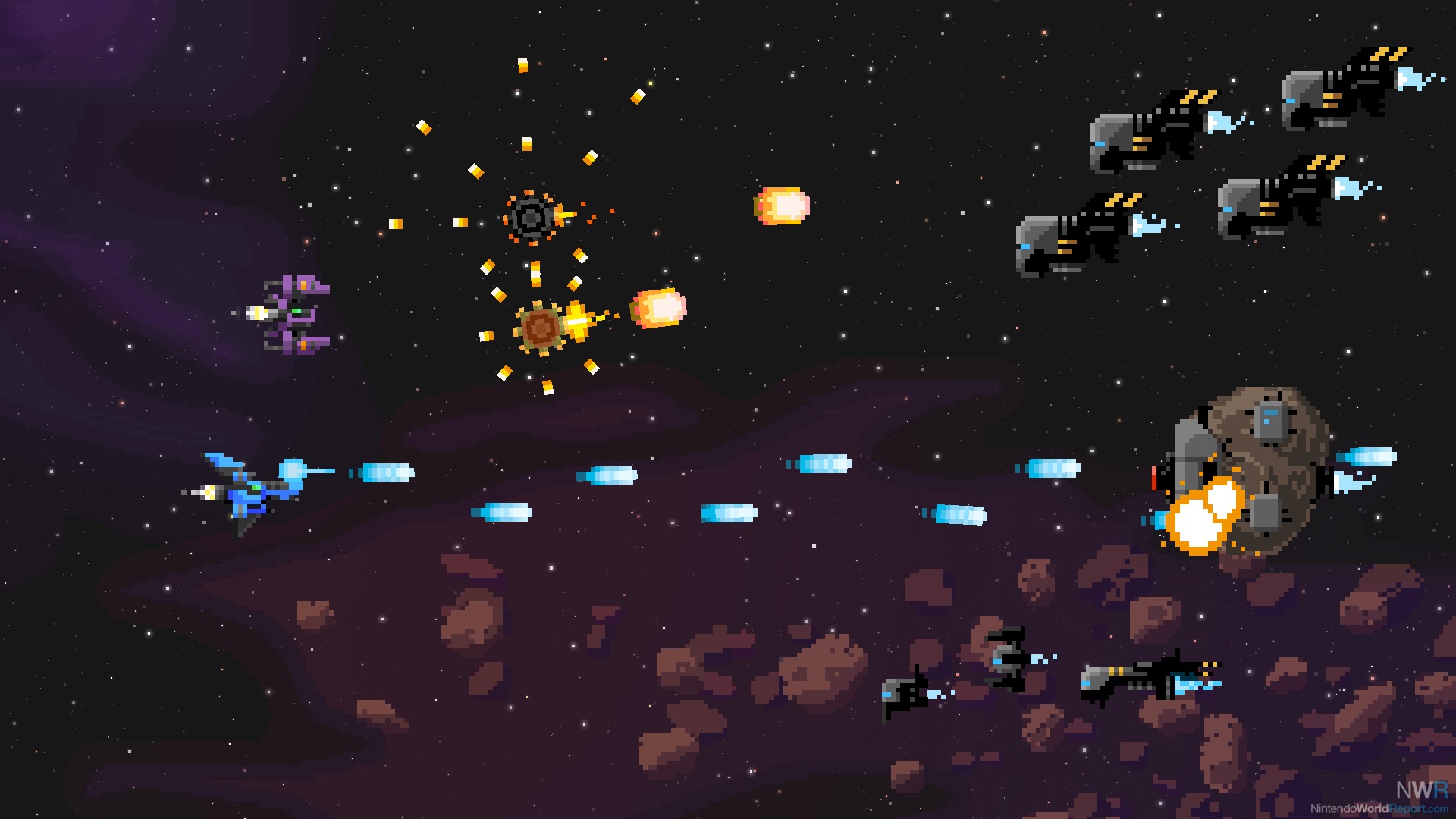 Many shoot-em-ups inheritably feel similar to rougelikes, leaving you underpowered and facing an uphill battle after losing a life. Developer Pixelnest Studio noticed the match seemingly made in heaven, and decided to go full roguelike with Steredenn, forcing the player to restart from scratch with every failed attempt. Each run has you progress through a number of segments filled with legions of enemies, culminating with a fun and well designed multiphase boss fight. As you blast enemies into pieces, the occasional cargo ship will be dispatched to the scene, yielding a new weapon when destroyed. While you can only have one weapon active at a time, ships have two weapon slots and with the press of a button you can switch between the two on the fly. Ships also have unique special attacks which add another tool to your arsenal. Limiting the ships’ capabilities as such makes the controls straightforward and easy to grasp. Within just a run or two I felt in full control, leaving me to focus on trying to survive the chaos on screen, which proves to be a daunting task. It can’t be understated just how difficult this game can be especially since it throws no lifejackets your way. Making progress comes at the expense of repetitively slamming your head against the wall which, depending on your mindset, can be either rewarding or incredibly frustrating. Runs tend to be relatively short, which works well with the focus on replayability. 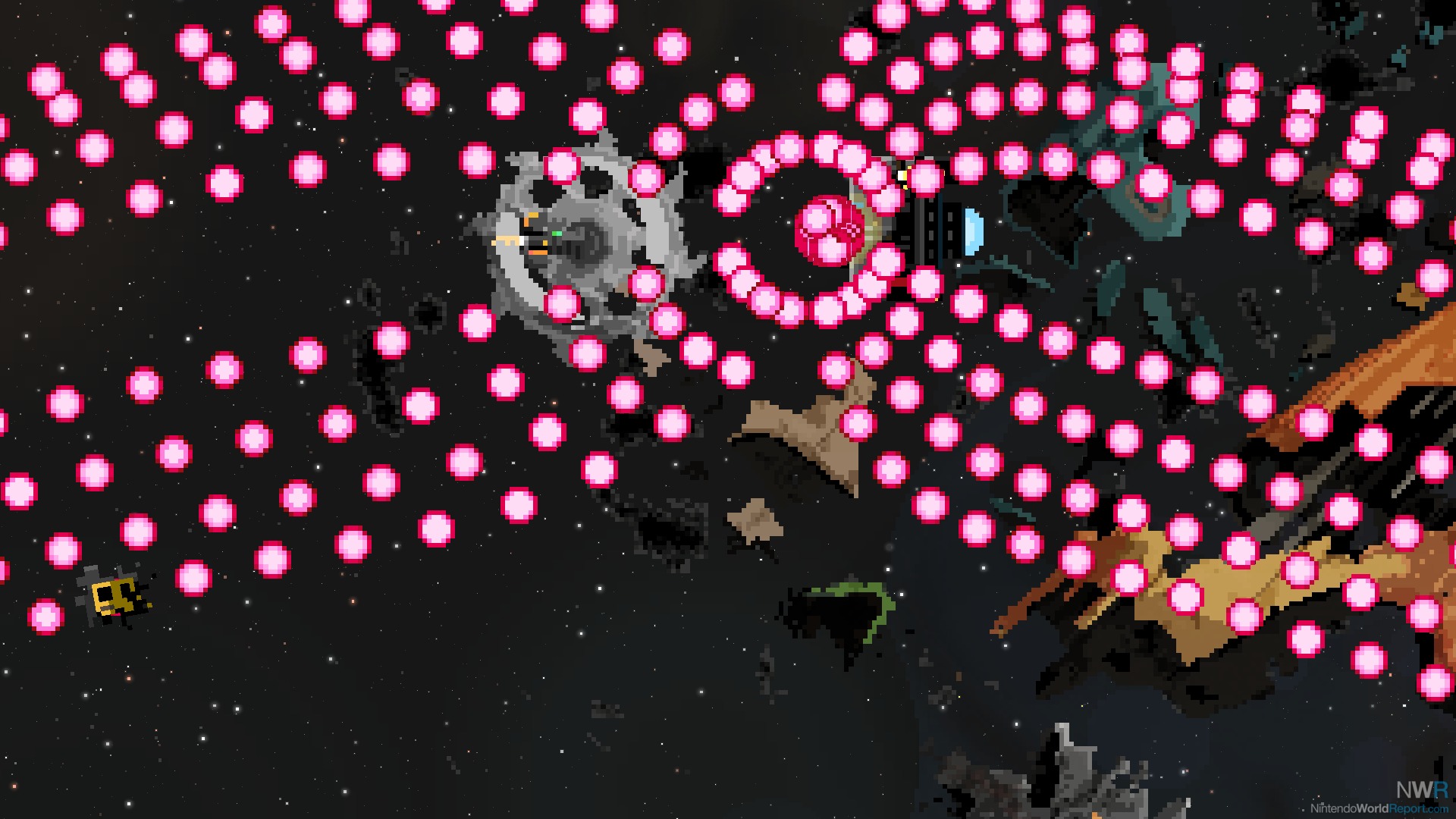 Where Steredenn really separates itself from other shoot-’em-ups is with its wide selection of weapons. There are the more conventional weapons such as fire blasters, lasers, and standard shots, but far more interesting weapons such as bots, swords, and others help keep each run fun and exciting. There are pros and cons associated with each weapon that must be taken into account when deciding how to approach each stage. For example, the sword power up attaches a giant sword to the front of your ship that inflicts a huge amount of damage, but in order to land a blow you must be very close to the foe, which leaves you in harm’s way. Using the two weapons in conjunction with one another is not only beneficial, but necessary as the game continues to ramp up its difficulty. I found the most fun and effective strategy was to use bots alongside a more standard shot. This allowed me to unleash a few bots to pepper the enemy with bullets, helping to keep the battlefield a bit less hectic while I zeroed in a specific group of enemies. There will be times when you get some unfortunate drops that lead to doubling up on one type of weapon, but more often than not there is a good amount of diversity among the power ups in each run. While the power ups are random, you do have choice when it comes to your ship selection. Starting with only the well balanced ship unlocked, new ships with different abilities and traits become available as you progress and defeat certain bosses. Testing out each ship is encouraged, as finding which suits your playstyle the most will be a big factor in how well you do. 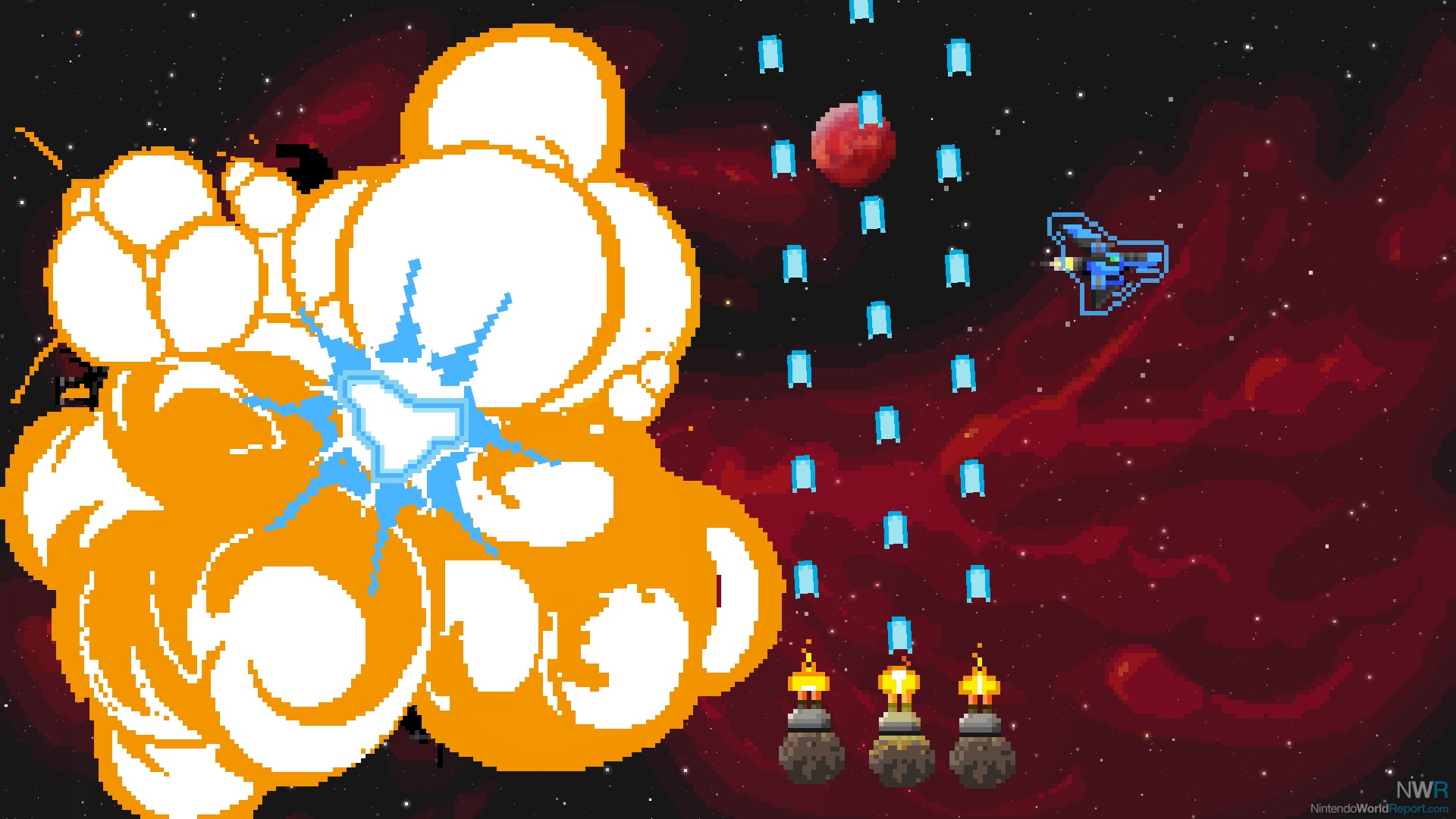 From a presentation standpoint, Steredenn looks good, but fails to really differentiate itself. Solid pixel art, interesting enemy design, and nice albeit somewhat generic backgrounds are present throughout, but tend to be a commonplace for the genre. The most impressive thing is the explosions after disposing a boss, which is a nice visual reward, before actually being rewarded with a modifier to boost your ships stats. While graphics look solid, I found the soundtrack to be grating after just a short period of time. I actually found myself playing with the volume turned off, which is an uncommon practice for me. In addition to the standard game mode, there’s a daily run where you have a single run to get your highest score to compete with others online, a co-op mode where you share a single life bar, an arena mode where you can hone your skills against bosses you’ve defeated, and finally a boss rush mode. The game runs well in both handheld and docked modes with no slowdown. I did however have the game crash on me once, but luckily it seemed to be an isolated incidence.

With so many shoot-’em-ups and roguelikes hitting the eShop, it’s difficult to know where exactly to start. Steredenn Binary Stars might look like a generic shoot-’em-up on the surface, but it offers quite a bit to be excited about. I found the wonderful selection of weapons and multiphase bosses an absolute delight despite the relentless difficulty. While the all or nothing nature will be more than enough to turn some people off, for those who welcome it will without a doubt find themselves proclaiming, just one more run.