Mamas, don’t let your babies grow up to be arcanas.

A few games have been on my radar when we see the weekly Hamster releases of arcade classics on Switch. Neo Turf Masters came early in the system’s life, and I still await the opportunity to swing for the fences in Baseball Stars II. But among the bucket list of titles was their rendition of Magical Drop III, which I had heard the highest of praise about from people who could afford a $600 system with $150 games in the late 1990s. It turns out that these incredibly lucky or rich people were onto something. 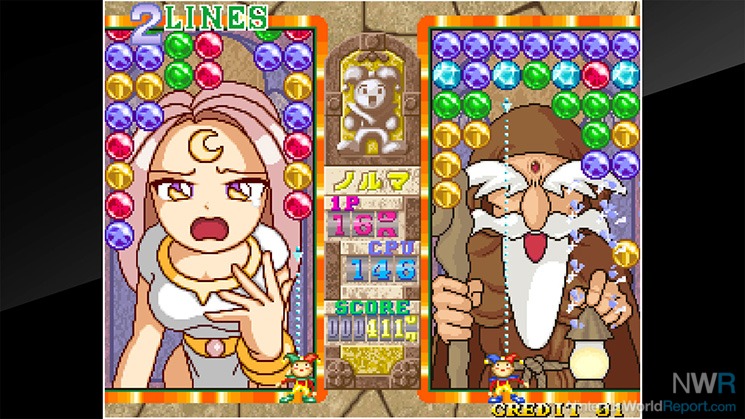 As with most puzzle games, the rules of Magical Drop are simple: Colored, circular orbs descend from the top of the screen, and you can pull as many of the same-colored orbs into your hand from the bottom row as you can get. When the orbs are released, sending up three will remove them from the board along with any orbs of the same color that touch it. If there’s an extended horizontal match, the remaining orbs will go up a row which can cause a chain of clears. The chains aren’t as easy to pull off as in a Panel de Pon type puzzle game, but I found them easier than most Puyo Puyo modes. The default controls worked fine, but can be adjusted if Y and B as the main commands would be unusual.

Magical Drop III doesn’t appear to offer much up front, but there’s a big choice right off the hop in the Arcade Archive interface; Japanese or North American. The North American version doesn’t offer versus CPU battles in the Magical Journey (adventure) mode or “difficult” battles. It also restricts the voice acting. I didn’t really miss any of these features in the time I spent with the NA version, but playing Magical Journey based on the Japanese version gave some more relaxing moments. Magical Journey is set up as a board game, but some of the later spaces threw me into multiple difficult rounds - rounds with a wider board, faster drops, and spots in the columns that required multiple chains to clear - in a row. I believe the most I had was five, and using the unlimited continues put me back to the first every time. I think I would’ve dumped the game’s cost in quarters to get past one nasty round (in Canadian funds).

The character designs for Magical Drop III are extremely sharp, even when playing in handheld mode. The art style is reminiscent of Japanese animation of the mid-’90s as well. The gems were easy to tell apart (red, blue, yellow, green), but there wasn’t an option that I could find to make adjustments for those who have trouble distinguishing colors. The voice acting was about what I expected for the time - a lot of screaming - and the music was largely forgettable. It’s a good game to have in a group setting where there’d be a lot of conversation, or to have other music/podcasts playing in the background if flying solo.

Although Magical Drop III isn’t at the top of the Switch’s tier list of puzzle games - Puyo Puyo Tetris and Ironcast are fighting for that spot - it’s still a high-tier product. Even if you’ll want to punch that stupid raven after losing for the 35th time, you’ll want to try again. The Neo Geo wasn’t really known for puzzle games, but this is the best that system had to offer.

A copy of the game was purchased by the reviewer. Youtube footage courtesy Daan Koopman.