Tonight we dine on turtle soup, but the soup has way too many ingredients.

TurtlePop, from Singapore developer Zengami, throws up a cutesy facade from the start, with bouncing music, a child-like vibrant aesthetic, and adorable animals. From that look, the game appears to be a younger-skewing adventure, but over the course of more than 100 stages and a variety of multiplayer options, this bright and cheery adventure gets overburdened with competing game ideas and concepts that mire the entire experience. TurtlePop is fun in spurts, but it’s not consistent and the numerous systems too often border on tedium. 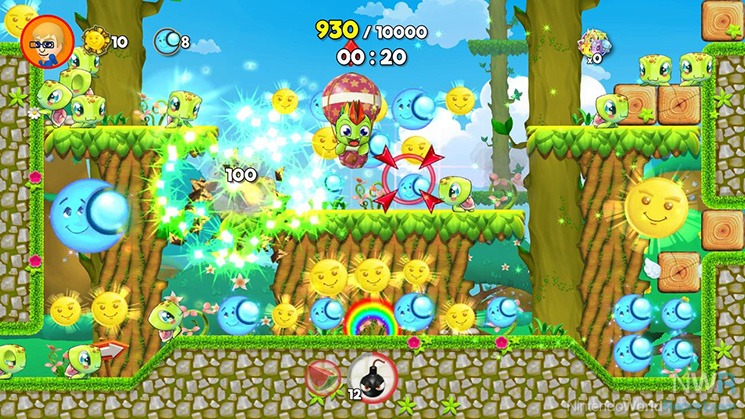 At first blush, this is a charming multi-character puzzle platformer. The initial moments are just about moving these little turtles to the goal. Only one can be controlled at a time, but each can be switched between when close by and a press of a button groups all nearby turtles together so they can move at once. Soon after, more complexities are added. Turns out a genie is helping you by throwing items at your characters. The genie can also switch certain items so a bomb blows up or an obstacle goes away. Then match-three puzzle elements are added, as the item switch genie ability can change colored blocks and remove obstacles too. Then new turtles get added at a regular clip, each with their own specific traits.

Switching between the genie and the various turtles gets clumsy, especially when levels auto-scroll or are time-restricted. The controls and breadth of functions don’t jive well with precision. While it oscillates between the two ideas, TurtlePop is best when it’s a gentle puzzling stroll, not a frantic race to the finish.

But even more ideas are piled on top of that base. Outside of the moment-to-moment gameplay, a loot-driven card system helps to power up your items and more. Cards are earned by beating levels, but they are randomly given out. Get multiple cards of a certain type and that card can be upgraded, unlocking new functionality. To gain and upgrade the cards, three different types of currency can be used. It’s kind of ridiculous. The entire card system feels like something from a free-to-play game with in-app purchases, but thankfully, no extraneous cost crops up here. While it’s somewhat novel at first, the card idea just becomes overwhelming after an hour or so. It’s not fun to manage; it just feels like a chore to work through, even more so when you’re trying to build up a specific set of cards because, as far as I can tell, the only route to acquiring more cards is random. 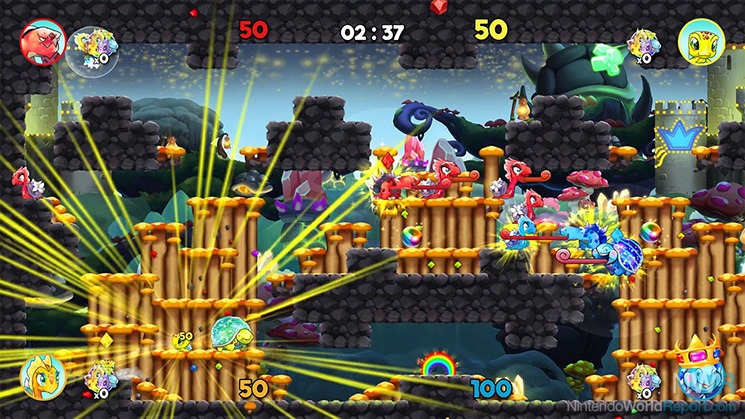 All these competing ideas coalesce into an unfocused mess. The content’s there - it has seven worlds filled with upwards of 100 levels. The challenge is inconsistent, though, as some levels are bafflingly simple and others are crazy hard, even more so if the cards don’t fall your way and you can’t get certain items.

On the bright side, everything can be played in two-player co-op, so at least you could sort through the mess with a pal. The co-op’s fun, but the nuances aren’t immediate, so drop-in partners aren’t recommended. Local four-player multiplayer suffers from similar issues, especially in the Turtle Clash split-screen battles, which make use of stages from the game. The other two arena-focused multiplayer modes, Crown Thief and Lick’em Up, are a lot easier for newcomers to jump into. They’re fun in spurts but not really something worth keeping in the local play rotation.

TurtlePop is bursting at the seams with stuff to do, but none of it is great. It’s all just okay at best, and the frustration mounts to a crescendo when random happenstance prevents you from passing a match-three heavy area and your green blocks are taking too long to respawn and you run out of time. A good game exists in the overburdened chaos that is TurtlePop, but as it stands, this is all far too convoluted to be something worth sinking a lot of time into. Charm can only go so far when strangled by numerous and conflicting ideas.