Subsurface Circular is a “Bithell Short”, a game from the developer of Thomas Was Alone made in the span of four months as a palate cleanser of sorts between bigger projects. It is a short interactive story where most of the gameplay consists of choosing between dialogue options. 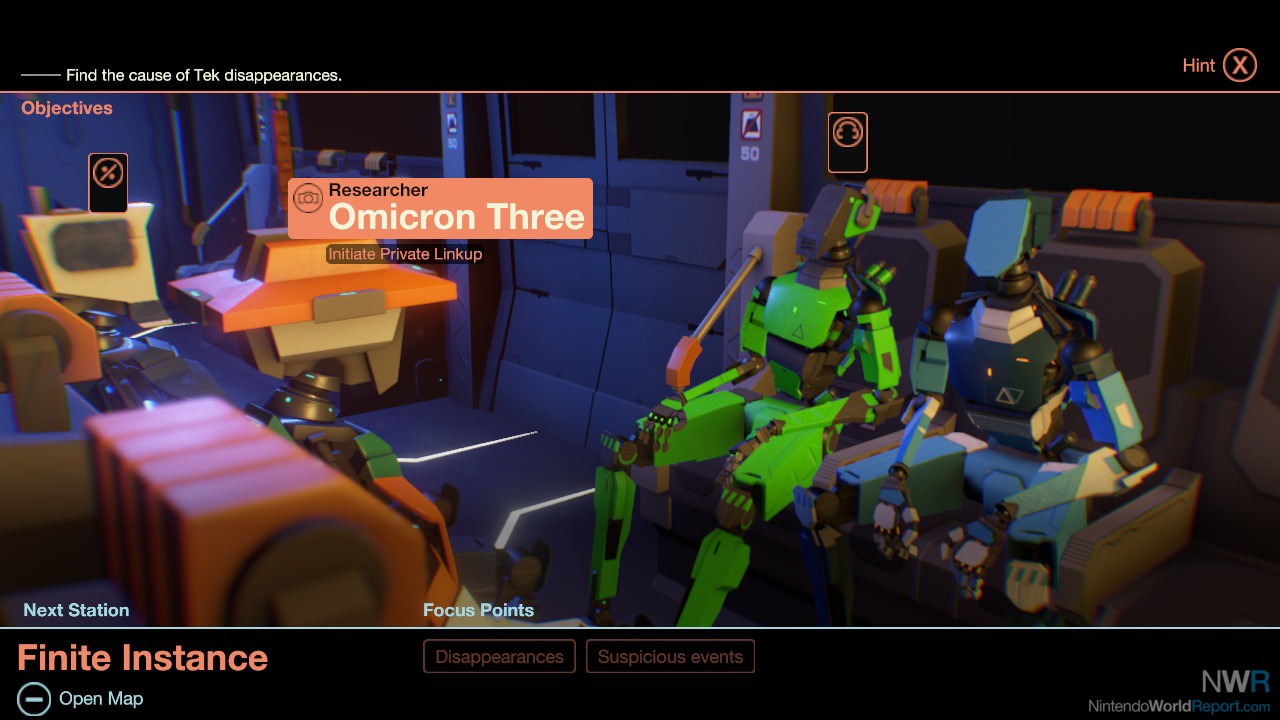 In a future where sentient robots called Teks have replaced humans not just in low-skilled jobs, but also in psychiatry or sports, you play as a detective who, in the subway, runs into a Tek asking you to look into a friend’s disappearance. You normally get assigned cases by the Management (the humans on top), but decide to take on this task, otherwise a short game would be even shorter. From there, you never leave your subway car, but instead interrogate the Teks who come in to see if they’ve seen anything suspicious.

The game has a couple of dialogue-based puzzles and a pretty kicking soundtrack. It even cleverly uses the Switch’s HD rumble feature to simulate the feel of a train stopping and going. However, this type of game lives and dies by its writing. Neo-noir stories where robots with minds of their own stand in for oppressed minorities is a popular subgenre of science-fiction and one I’m very familiar with, so I set out to do my best and choose the dialogue options that would get me to the bottom of this mystery. Always polite and often keeping the fact that I’m a detective to myself, I questioned robot nannies and construction workers to learn if they were aware of strange happenings. I had the case solved after a couple of hours of reading.

Turns out I could have been rude and unsubtle and still solved the mystery, as most dialogue choices barely have any impact on the way things unfold. One of the most significant changes in my second playthrough is that I nicknamed an old Tek “Rusty Piston” instead of “Grandpa”. The interactivity in this game is minimal, to say the least.

So when I say this game lives and dies by its writing, I mean it. And unfortunately, the more I thought about the game and the world it describes, the more it fell apart.

After the first playthrough, you unlock a developer commentary option. In it, the developer states that it was very much their intention to make a political game. The game is not subtle about, on one level, Teks standing in for immigrant workers. But if you’re going to write an allegory with robots standing in for humans, you run the risk of unintentionally saying something gross.

For instance, your interviews reveal discontent amongst humans because Teks have taken their jobs. You can choose to reply in disbelief “But that’s against their best economic interest!” or “But we’re doing the jobs they won’t touch!”, as if you could appeal to the financial sense of bigots to make them accept the other. As if “they’re good for the economy” was the best reason, the most moral reason, to treat others with dignity. 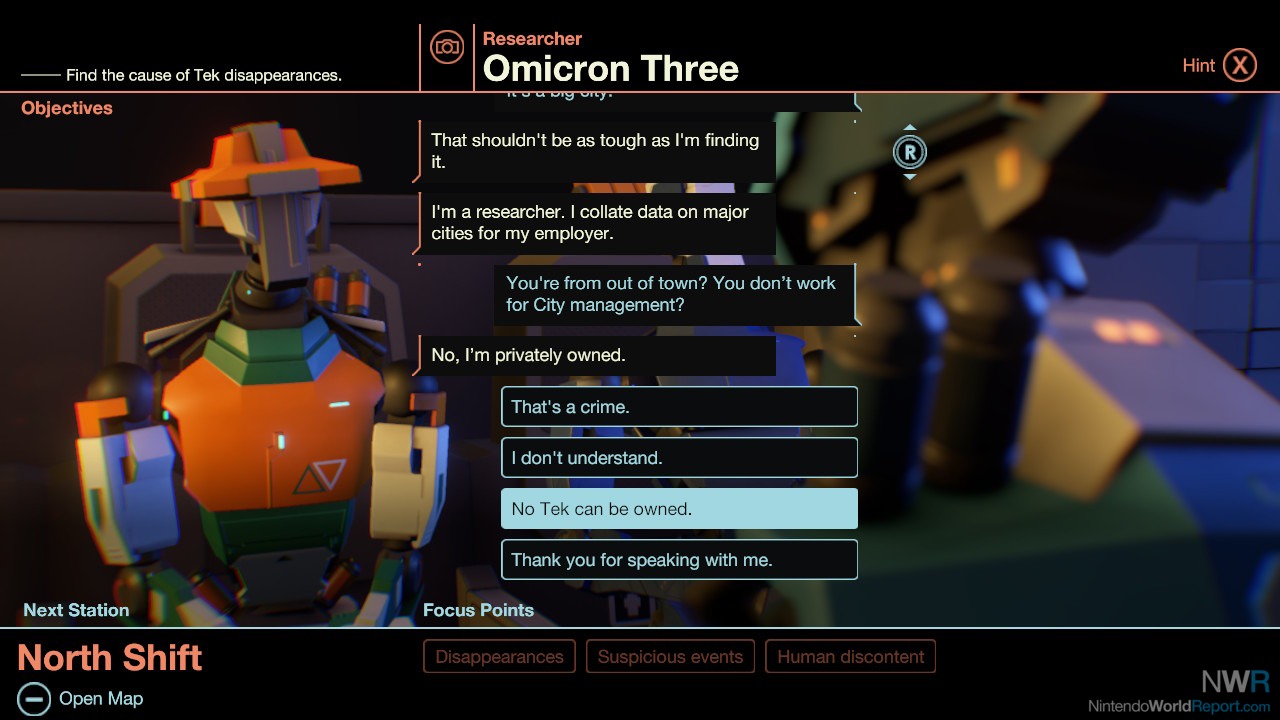 Add to this the fact that the robots you meet in this game have no inner life, not even a fake one like the replicants of Blade Runner 2049. They are 100% their job. Their very personality is set to match their occupation. Despite the game’s efforts to humanize the Teks, by having them demonstrate emotions for instance, they were never a convincing simulacra of humanity to me. It made a would-be gut-wrenching dilemma late in the game rather clear-cut. And again, if the goal of the developer was to have the player empathize with the plight of immigrants, I wonder if having robots standing in for them would have the opposite effect. On the commentary, the developer admits the allegory isn’t perfect, but I would argue it’s downright harmful.

Outside of the janky allegory, the game touches on other interesting themes, but never explores them deeply enough. It is stated for instance that private ownership of Teks is illegal and that all Tek athletes, psychiatrists, librarians, or nannies are government-owned, yet only the wealthy can afford their services, meaning this isn’t a post-capitalism society like in Star Trek. What does that look like? How many people has poverty killed? I find it weird that a game that aims to be political doesn’t even try to explore these questions.

I don’t believe I am thinking too deeply about all this: getting the player to think about the consequences of increased automation and the power structures that lead to inequality and scapegoating is the whole point of the game. I think it’s commendable and I have no doubt the developer had the best of intentions, I just hope that next time they handle such serious questions with more care.