Master the claw and the claw is your master.

The first game from HALEgg, the mobile arm of HAL Laboratory, Hatakaru UFO has been localised in several languages and is available for iOS and Android as Part Time UFO. Bearing a similarity to HAL’s BoxBoy! series with its pixel style, though more colorful, it’s a fairly simple physics game. However, the levels have enough variation and some clever puzzles to keep them interesting.

You control a little UFO friend with a claw who is visiting Earth and finds that helping people with jobs and earning money is how things work around here. Using the claw, you have to pick up and stack items in a particular order to solve a level. The levels put you in many different situations and you may have to deal with the environment when you are working away carrying items. Unlike the rigged controls of real life prize claw games, the claw controls very well, particularly impressive for a touchscreen mobile game. For the main control option, the game advises that you hold the phone in both hands upright with one thumb controlling the joystick on the bottom left of the screen and one controlling the drop button on the bottom right. This also solves the problem of your hand covering the screen. There is a second option for one-handed play where you are dragging the UFO around the screen directly, but it is less accurate for fine control.

Most of the time you can just grab objects from roughly above them as long as you are not too close but sometimes you will have to precisely position the claw as the angle at which you pick it up it has an impact on which way round it ends up and how much it sways. Being physics based, the speed you move at also influences this. If you fly around fast and just toss things around, they will just fall and roll. If you slowly, carefully, tap your way around, you can get pixel precision in placement. It feels very accurate and you never feel that the game has caused you to drop something. 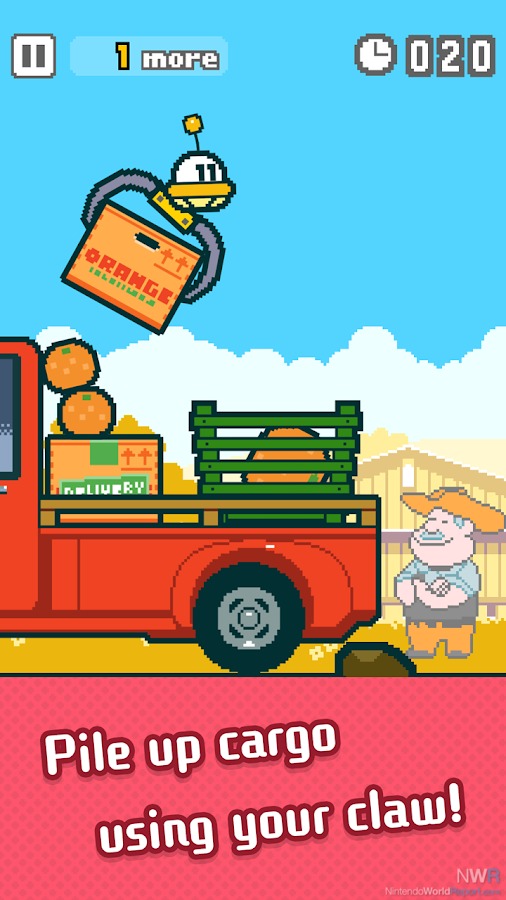 The graphics and style add up to a great, detailed presentation and each level is full of animated touches such as the character expressions. Our hardworking friend will perspire with effort while moving heavy objects and background characters react to your successes and failures. It is really very polished and just as whimsical as you’d imagine from the theme. The musical track helps with this, with a little voice singing along reminding you of the original Japanese name and also changing sometimes to match the mood of the level.

Each level has a time limit but that is just one of three medals you can earn, and play continues past the time limit as there is no requirement to get all of the medals at once. Clues for the other two medals are given in the pause menu and end screen of each level. This means you can go at your own pace and it can be quite a relaxing experience. That doesn’t mean the challenge isn’t there though; you will certainly need to try multiple times to get it right and figure out all the puzzles. 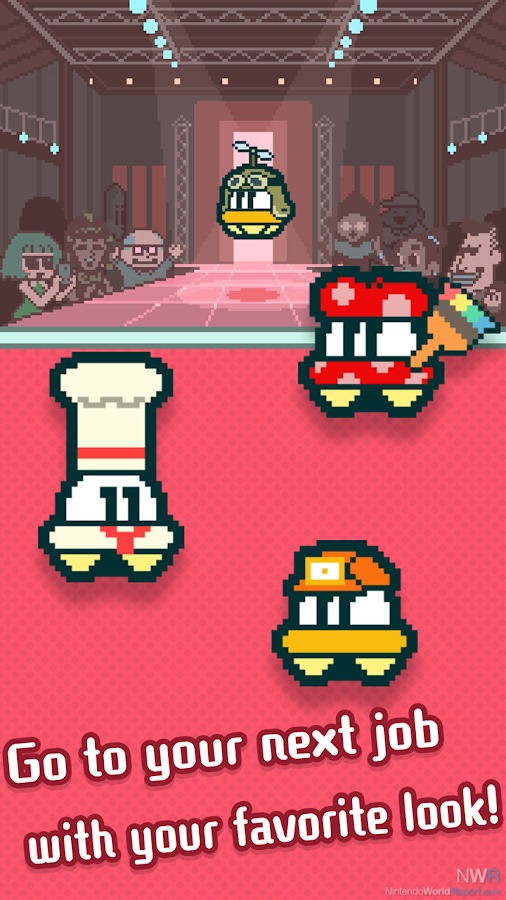 What can your earnings be used for? Buying hats. The various hats grant abilities or simply look stylish and match the level theme. Some of the hats help in specific levels and one hat in particular makes the game a little easier, but you could always choose not to use it. Replaying levels grants plenty of coins too, so if you are struggling you can easily save up for a hat that makes it easier to traverse a certain level.

Even though you won’t instantly figure out every level, the game won’t take long to complete, nor much longer to get all the medals and achievements. And there is really no reason to replay a level once you’ve collected all the medals.

It’s refreshing to find an entirely self-contained mobile game that doesn’t have in-app purchases and doesn’t require a constant internet connection. Sadly you can reach the end in one play session and it doesn’t take much longer for 100% completion, but it’s worth the price of entry for the joy of that Nintendo polish in mobile form.

It looks fun. I plan on buying it once I get a new phone