Make sure you have a group of co-conspirators otherwise this heist will take a turn for the worse.

After casing Nintendo for a number of months, Payday 2 is finally ready to bust down the doors to the Switch to steal some cold hard cash. Joining a strong catalogue of multiplayer games on the Switch, Payday 2 looks to differentiate itself with a strong focus on teamwork and coordination. A perceived importance is put on stealth while pulling off heists, but it quickly devolves into fighting through endless waves of enemies. While that’s not necessarily a bad thing, a tedious solo experience, horrible AI, and no way to communicate with other players leave this port falling a bit flat.

A few tutorial heists right off the bat do a wonderful job of teaching players the skills they’ll need to succeed. These give a complete run down of the controls, which aren’t exactly simple, but do an elegant job of making them easy to understand. Button prompts will spring up during heists at certain events, like when trying to open doors, tie up hostages, or setting up drills to crack safes. After just a short period of time, everything felt natural and I no longer had to worry about the controls. The tutorials also lay down the foundation on how the heists themselves work, which do vary substantially from mission to mission. Before starting a heist, a brief rundown of the objective and a possible way to approach it are given before letting you case the area. This allows players to scope out the vicinity in order to discover other possible ways to enter and possible hazards blocking your objective. This opportunity to map out your surroundings is useful, though once the chaos begins it sometimes becomes difficult to determine your next course of action which can lead to wandering around aimlessly. 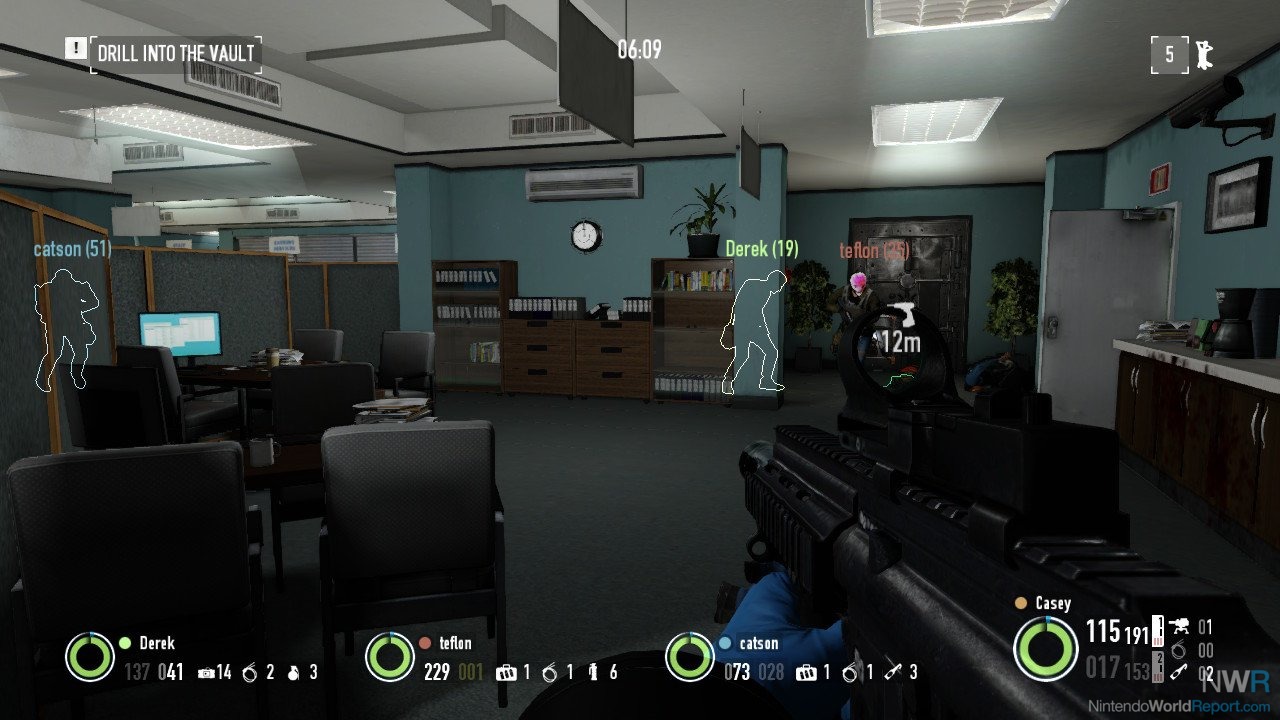 After completing the tutorials you’ll be introduced to Crime.net, the hub that facilitates all of the heists that are available. Details of each heist are laid out including how much payout will be rewarded for successfully completion. Each heist has its own difficulty ranking, with later campaigns ramping up tenfold. Some missions are simply robbing banks, but others are more complicated, such as stealing drugs from a club, parachuting out of a cargo plane to retrieve stolen goods, or even gathering goats scattered throughout the city. The beauty of each heist is that certain aspects are dynamically generated, with set pieces such as safe locations changing, keeping each playthrough fresh. Cash rewards are given upon completing heists and are used to upgrade your arsenal of weapons. Weapon modifications are fun to tinker with, giving each weapon a personal touch and feel. Heists also provide experience that can be used to unlock customization in the skill tree. The skill trees are varied with different abilities and perks which are a blast to experiment with in conjunction with perk decks.

With the main focus on cooperative multiplayer, it begs the question if the solo experience is up to snuff and the truthful answer is no. When playing alone, the rest of the group is filled with three computer partners that are outright awful. They tend to stand way too close to you instead of covering choke points to protect an area while using a drill or carrying cargo to the getaway van. They also don’t help with the objective, so if five bales of cash need to make it to a van all the way across the map, you’ll be making that trek five times on your own. They can revive downed teammates and fire at enemies, but more often than not they just get in the way. 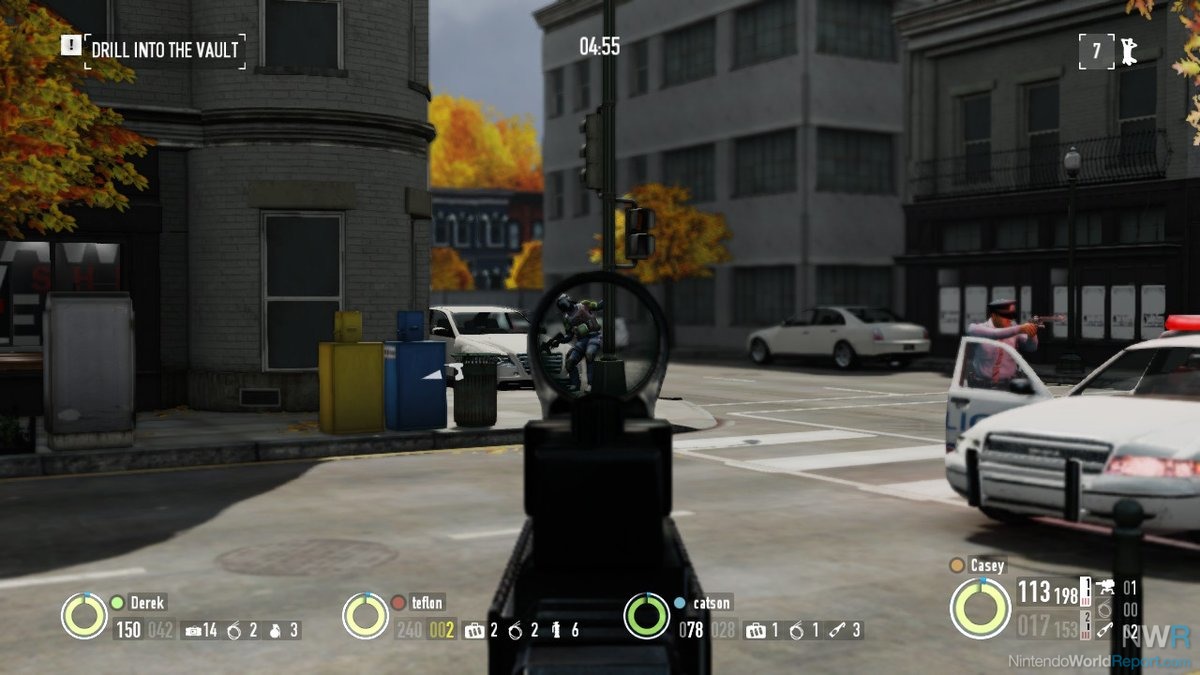 Fortunately, everything works infinitely better with human controlled partners and this is where the value comes in. Working together to bring huge loads of cash to the van was both fun and exhilarating. Getting connected is fairly simple, opening Crime.net lets you start a room or join an already existing game. I found that once I was in a game it ran well and I didn’t experience lag, however there were a few cases of being disconnected from the host. Another irritation was that the game pauses while new players are trying to connect and won’t restart until they’re fully loaded in. The biggest oversight of playing online is there’s currently no in game way to communicate with other players. While voice chat with the Switch is likely not possible, simple action commands similar to Splatoon 2 would have gone a long way. This usually isn’t a problem with the easier heists, but when attempting a three or four skull difficulty, it becomes apparent verbal communication is needed. There’s also local multiplayer available by connecting up to four switches, which sadly I was unable to test. 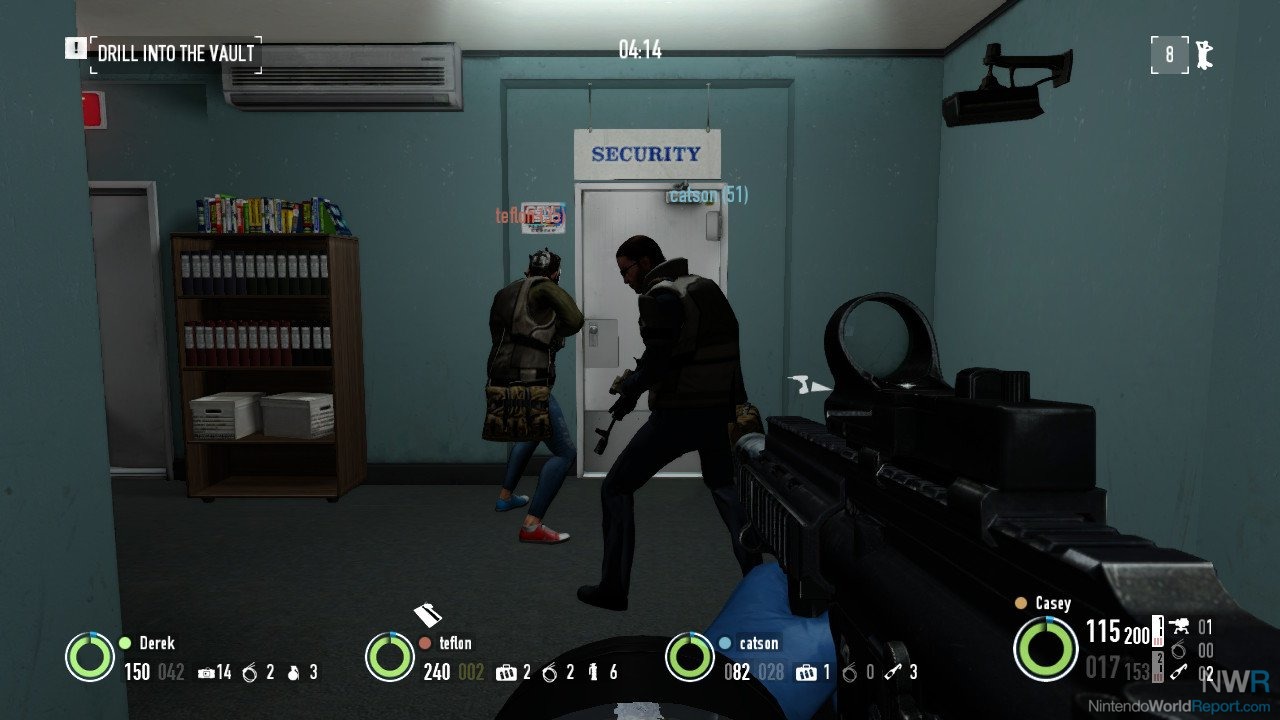 Performance is always under the microscope with ports and for the most part Payday 2 does very well on the Switch. In docked mode it runs in 1080p and in handheld 720p, both capped at 30fps. I found it ran exceptionally well in either mode, with only a few occurrences of minor frame rate issues when flames from molotov cocktails or flares were up close. Fortunately, it wasn’t severe enough to negatively affect gameplay. Visually speaking Payday 2 is a bit dated, but ultimately not a distraction. There were a few instances of enemies getting stuck behind a door with no room to stand, but these didn’t occur often. Poor AI in general is a problem throughout the game as enemies don’t really have much of a plan aside from peppering an area with bullets or foregoing personal safety to sprint up close with no regard for their well being. It simply feeds into the endless waves of enemies the game more often than not falls back into.

Payday 2 has a lot of good ideas, but is held back by a bevy of issues. For those who have a dedicated group to play with online there are hours worth of fun to be had overcoming the more difficult challenges. However, If you’ll need to rely on random players the fun can only go so far without any form of communication. And if playing solo is your only option, I’d highly suggest thinking twice because quite frankly playing alone is not very much fun at all.

Yeah, the bots got a lot more useful since the version that got ported. On the PC you get buffs for using bots, they can carry loot (though slowly), they no longer get stunlocked by turrets, they can be equipped with different weapons and abilities and you can order them to hold a position. It's ludicrous that they didn't include that stuff on the Switch.

In case you needed any more evidence that putting voice chat in phone app outside the system itself was a massive mistake.

I'm actually tempted to pick this up if enough of my online buddies do the same. Sounds fun, and I don't think the older version will bog down my fun.

They more than likely missing the new features as Payday 2 is such a fast moving target. Trying to include the changes during the porting process would be a mess. If the other console releases are to go by the switch version will get updated with the new features but will have them rolled up in one big patch. Don't ask when as it gets delayed alot as it's PC first game but if they say they are going to patch it they will follow through until it is technically infeasible.

Do not buy this if you have no other friend(s) to play with. Single player is a trap. If you have a PC that can run it, get it there, its not very demanding but as said before its a moving target so the requirements are higher than the minimum stated.

If you have played as long and followed it as I have it is pretty amazing how far this game has gone. It started off pretty simple, small jobs, small maps, broke dick drills into something huge. It several multiples larger than release.

I burned out by the One down update as that difficulty level is anti-fun, you don't feel a sense of achievement finishing it, just relief you don't have to do it again. Its one of those listening to the fans is good but don't actually listen to them as a lot of ideas are just bad and the effort separating the good from bad is better off developing the game. The loudest are the most toxic who know less about gameplay than anyone else.