If you miss this the second time around, make sure to go back and go through the timeline where you play this game.

Radiant Historia had the unfortunate luck of coming out on DS in 2011, right before the 3DS launch. I was excited for the game back then and I still got distracted from it for months due to the new system. It’s almost comical that the 3DS remake, called Radiant Historia: Perfect Chronology, is coming out equally as late in the life of its system, almost a year after the Switch stole the 3DS’ thunder. Nevertheless, this classically-styled RPG is every bit as good as it was in 2011. This remake has a wide variety of new content that, while a little on the superfluous side, is really nice, making it a lot more than just a regular old upgraded port.

If you’ve already played Radiant Historia, feel free to skip down a bit to read about the new stuff. If you’re coming in blind, here’s the basics: Radiant Historia is a story-heavy RPG that has a large emphasis on alternate histories and timelines. The main character, Stocke, is a stoic soldier who is given access to the White Chronicle, a book that allows him to travel between time nodes, as represented in game as a helpful flowchart. Early on, Stocke makes a choice that veers off into two distinct timelines. The rest of the game involves bouncing between both timelines, reaching a variety of dead ends and uncovering a lot of secrets and mysteries about the origins of the White Chronicle and the war that is raging between the kingdoms of Alistel and Granorg.

The story gets a little on the convoluted and crazy side in the back half, but the characters are well written and the twists and turns are fun and exciting, especially with the layers of dramatic irony because you, the player, generally know much more than the players do. Even upon replay, the story holds up. My only other knock against it is that the story does take over at various points. It’s nowhere near Metal Gear Solid levels of gameplay-less story dumps, but exposition and developments can take you away from combat and exploration very often.

Turn-based combat has a few twists of its own here, as the enemies are all laid on a 3-by-3 grid. Using different special abilities, you hit the enemies all over the playing field with your three-person party to line them up in the same square so you can do damage to more than one at a time. That’s the basics, but it gets more complex as you get a bigger cast with varied abilities. For example, one early character uses traps, which you can place and then knock enemies into for massive damage. The combat benefits a lot from being broken up by bits of story often. I find it works very well in small doses, but at a certain point, you develop specific strategies for dealing with enemies and the battles start to feel repetitive, which in turn drags on the gameplay. Bosses and other enemies that flip the script on you are excellent, though, as making use of the various systems to effectively defeat challenge enemies is grand.

For the most part, this is the same game as it was in 2011 with a lot of quality of life upgrades. The pace seems generally quicker and the new art looks a lot sharper. If you enjoyed this back in the day, the changes are for the better, making it the ideal way to revisit it.

But Perfect Chronology also holds a lot of new content. The biggest aspect of that is Possible History, a series of alternate history quests that unlocks near the end of Chapter 1. Stocke is whisked away mid-adventure to the Dunamis, a ship that soars through space and time going to bonkers alt-histories. Running in parallel to the main story after its introduction, these quests add background and depth to world and characters of Vainqueur. At the center is a new character, Nemesia, who works with you to acquire different artifacts. While it isn’t essential to the overall story, Possible History is a fun change of pace that puts characters in off-kilter and weird situations.

The other major addition is the Vault of Time. This extra dungeon is just that - a dungeon with a lot of enemies to fight. It’s great if you want to grind levels at all during the story, especially if you have some characters underleveled. The other benefit is a currency you earn in the dungeon that can be used to get a variety of good items and weapons. With both this and Possible History, the biggest downside is that the story is spread very thin. In its original form, jockeying between the two timelines is relatively easy because they are distinct enough to separate. The new content adds way more variations, making it easy to get confused and overwhelmed. The game recommends playing Append mode first, which is the story as it was in 2011. Perfect mode features all the new content, but it’s hard to recommend new players play through it twice to experience the game in a less convoluted manner and then see the cool new stuff.

The rest of the additions are just quality of life improvements. It kicks off with a ridiculous anime opening and theme song. Character art is redone. Yoko Shimomura added a few new tracks to the subtle but spectacular soundtrack. The voice acting, added for the majority of the main cast, is one of the only bones of contention. It’s mostly inoffensive, but a few characters are a little grating. The important role of the main hero Stocke is cast well, though. He matches the voice the character had in my head when I played this game seven years ago.

Radiant Historia: Perfect Chronology is a fantastic remake of an excellent RPG. The original DS game isn’t exactly dated, but the additions here are interesting and fun, even if a little unneeded. The new content mostly just seems more like the result of a development team revisiting an old project than anything else. The core game here is already so strong and so engrossing that more content is good no matter how necessary it might be. I’m thrilled Radiant Historia is back on a modern system, especially since the new release is now the best, definitive way to experience a masterful RPG.

February 13th 2017 seems like an eternity away.  Radiant Historia is by far my #1 favorite DS game -- which says a lot considering the RPG library on that piece of hardware.  Ever since I heard this game was being remade (for 3DS) in Japan it was pure torture waiting for a NA localization announcement.


Now I must decide if I should finish up Etrian Odyssey 5 first or jump right into RH:PC.  Which reminds me...I wonder what the future of the "Etrian Odyssey" series will be.  Switch?  Vita?  Non-existent?  I'm sure all 10,000 of us Etrian-Odyssey fans would love a 6th game or a remake of the 3rd game....for 3DS.  Just saying.

Been interested in this series for a while but haven't jumped into it. When I have a chance I will pick this up. 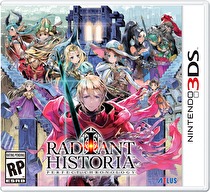