The classic PC-style adventure game has something that always manages to put a smile on my face. With a blend of unusual circumstances, slightly off-center characters, oddball puzzles, and typically humor, they’re not usually deep but they are at least consistently entertaining. Seeing little more than just the opening cutscene to Her Majesty’s SPIFFING, it looked like all boxes would be checked, and while the adventure isn’t a very long one, it does manage to provide a few hours of quirky adventure fun. 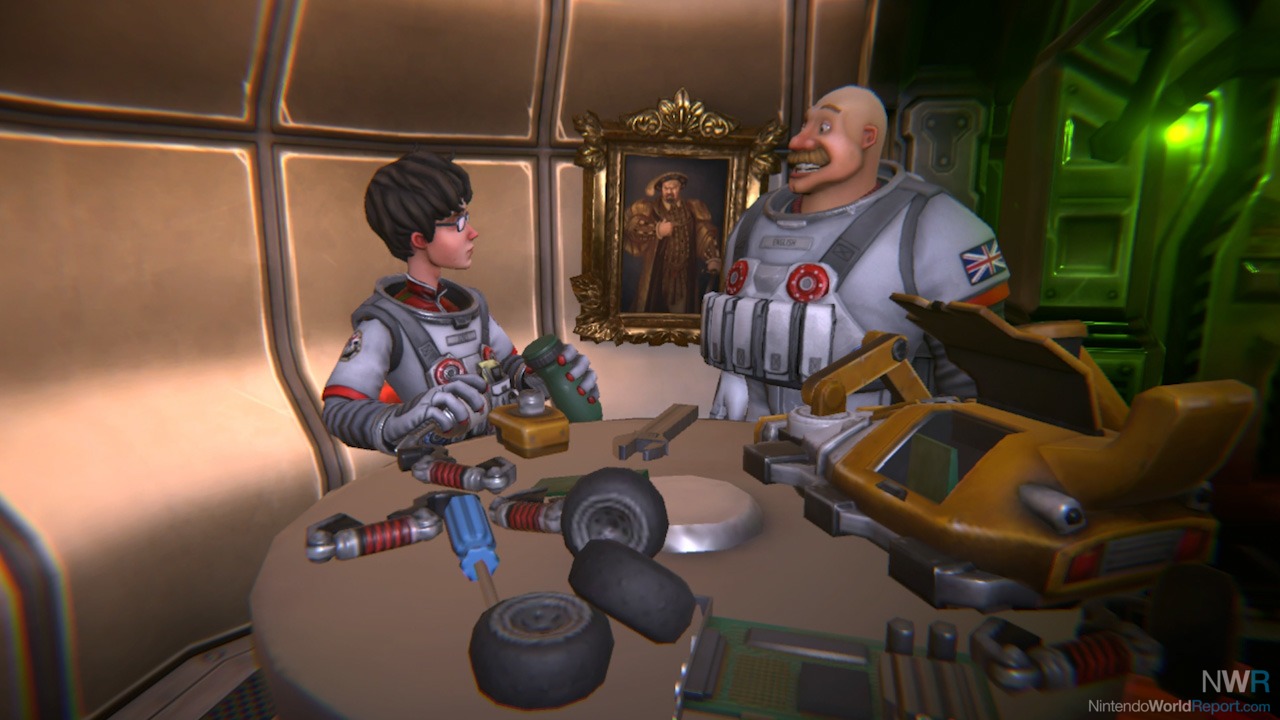 You play as one of the pilots of a very curious-looking spacecraft launched by the Queen Mother herself to expand the breadth of the Empire once again, just this time in space. The path to doing so will require that you resolve some unusual problems in typically weird adventure game ways, engage in some silly dialogue full of self-deprecating humor, and essentially “click” on anything and everything you see that will allow it. Thankfully when you walk near anything you can interact with, it will automatically be highlighted (eliminating the dreaded pixel-hunting that occurs in many games) and the straight-forward action wheel that pops up when you decide to check something out makes this a breeze. You can typically look at, talk about, or analyze any of these objects you’re able to interact with and the actions are also always context-sensitive. Even if you think you know what you’re doing, there’s almost always something cheeky your character will have to say so in general I’d say it is well worth always exhausting your options, if nothing else for the giggles.

The humor is really what manages to keep things afloat, whether it is in the interactions between you and your co-pilot, your character simply talking to themselves, or some of the silly solutions you’ll need to find for the problems you’re presented with. In general the normal Adventure game rules apply; you’ll want to thoroughly explore every space, leave no object unchecked, and always give anything you pick up a good look as well for measure. As the game goes on, several situations crop up where you need to attack in a few layers so taking note of just about anything your character says is important as there may be a hint thrown in. While one typical issue with the genre is that solutions will tend to get convoluted, I wouldn’t say that there are any horrible offenders in SPIFFING. No doubt understanding what you should do may take some trial and error and head scratching but I’d consider the vast majority of solutions to be quite sensible. The fact that your inventory doesn’t get filled with junk and red herring objects helps keep you focused.

In terms of the issues, first and foremost would be that the length feels slightly short, and the end a bit abrupt. It just seemed like the game had fully hit its stride and then the credits rolled. Now, for the budget-friendly price, t is a fair trade; I just would have wished to have a little more to do so the end of the game didn’t feel so sudden. Outside of the length, I actually have very few concerns to speak of though as the interface is generally intuitive, the dialogue is uniformly funny (though perhaps people less familiar with British culture and humor could find it less amusing), and everything generally runs very smoothly.

Overall Her Majesty’s SPIFFING was a pleasant surprise, full of cracking humor and some suitably absurd puzzle-solving. It may feel a bit on the short side but given its price the length is fair and I would prefer it over too soon rather than overstaying its welcome. For people searching for a game that is light, not terribly demanding, and can just be enjoyed for quite a few hours it’s pretty easy to recommend.