Quite possibly the most appropriately titled game ever 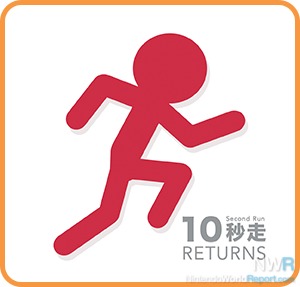 Way back in 2010, a little game titled 10 Second Run was released on the DSiWare shop, and it became quite the hit. The nature of the game was self-explanatory, and made good use of the portability of the DSi. Now we have 10 Second Run Returns, a revisit of the franchise arriving on Switch, which also has the wonderful ability of being able to play on the go. So how does it stack up? 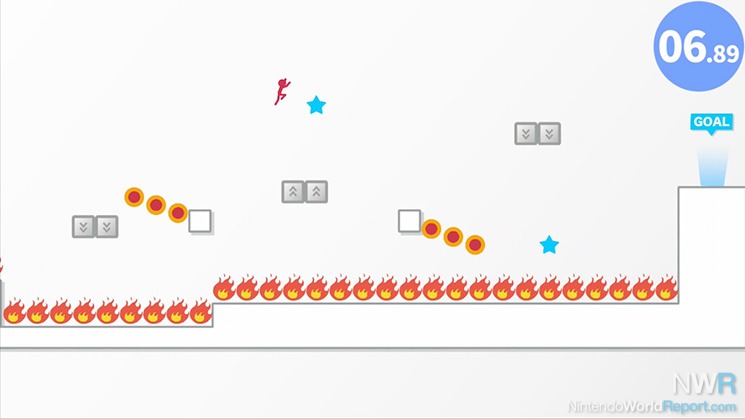 The gameplay is about as simple as it could be. The player has the ability to run, dash, jump and wall jump throughout each tiny level, with the goal being - as you’d probably guess - get to the end goal within 10 seconds. The jumping feels good, and the dash button adds a nice amount of control both midair and while running that gives the player a little more speed when needed.  The challenge starts out easy enough but the difficulty quickly increases after only a few levels. It’s hard enough dodging obstacles and traversing moving platforms to get to the goal, but also included in every level are 3 collectible blue stars that add even more challenge to the mix. Obtaining these stars also unlocks different characters that can be used, some more interesting than others.

Throughout the entirety of the game I never experienced a drop in frame rate, both in single and in multiplayer. Everything from the menus to the gameplay runs silky smooth, providing a nice polished feeling to the overall experience. Never once did I feel cheated having come up short of reaching the goal, I was keenly aware that every mistake was my fault. Because of the frantic nature of the game, I died and restarted levels numerously, and that instant restart was appreciated the more I played. 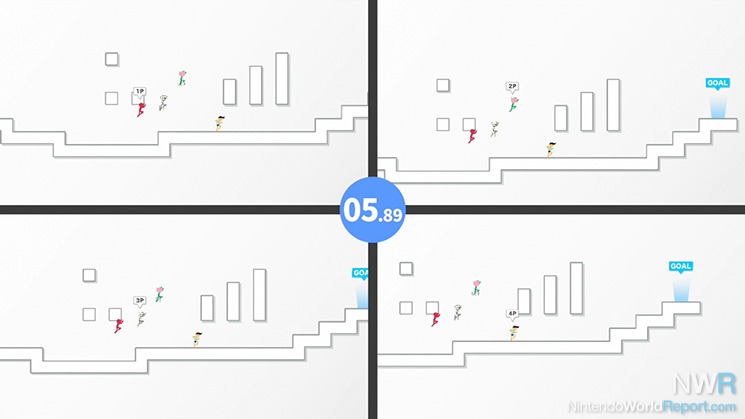 The level design is surprisingly well crafted. Almost all of the levels have a perfect way to complete them, and some even have multiple paths. After getting used to the physics and playing through many challenging levels, it felt great to plow through a group of tough levels on my first try. The setup of each level differentiates a great deal, as sometimes you’ll be jumping over tons of obstacles, or running from a fast-moving spike wall, or rushing up an elevator, among many other scenarios.   The multiplayer modes included are a nice addition, but ultimately disappointing. Although touted “VS Battle Mode” and “Battle Royal”, there really isn’t any change to the gameplay from single player - just now you are racing through each level with up to 3 other friends. This is all fine and dandy, but unfortunately there isn’t any real goal to shoot for when playing against friends, for it only counts the number of wins from each player. This does provide the opportunity for groups of friends to come up with their own rules, (first to 5 wins, first to 10 wins, etc.) but the lack of any real reward did leave my chums and I somewhat unfulfilled.

Overall, 10 Second Run Returns is a solid but somewhat dull title. The music is nice, but everything else from the art, gameplay, and multiplayer is quite barebones. What it lacks in sizzle it makes up for in function. The level design is fair and fun to overcome, and holds plenty of challenge for the platforming fanatic. Although there may be many other more exciting looking selections available on Switch, 10 Second Run is a good option for quick and reliable platforming fun.

What are the little "L SEP" box things throughout the review?