Battle Royale is fun while it lasts, but doesn’t offer anything substantial.

Kirby games have always appealed to me. They’re light, cheerful, and usually fun to play. Kirby Battle Royale, a collection of mini-games on 3DS, has all these qualities. For the most part, Battle Royale is fun and I never really had any real issues. The problem boils down to the lack of content. It clearly is nothing more than a bunch of mini games put together in one package, that, while nice, don’t offer any longevity.

A few different modes are available to choose from, though they all revolve around playing the same mini games. The story mode is simple, and probably the most interesting out of the lot. The setup is that Kirby meets up with Bandana Waddle Dee and together, they compete in a league hosted by King Dedede in the hopes of scoring a really lovely looking cake. Of course, Dedede isn’t going to let them win this tournament, and plans on making things tough for the duo.

It’s here that you’ll compete in a series of mini-games, aiming to earn enough points to fill up the meter that, when filled to capacity, will allow you to move on to the next league. You can also use these points later to unlock skills for use in the mini-games, as well as other collectables. The story mode isn’t particularly interesting and doesn’t overstay its welcome. It’s a quick, mildly interesting quest that’s best parts are the familiar faces you see.

Outside of the story, the other primary mode is Battle, where you can just jump in and play the games. A separate Online mode lets you play against others online, a Training mode is there for training, and a Collection mode is there for, well, collecting. The names are self-explanatory.

10 mini-games are available at your disposal. I never had any problems playing any of them, but the fun I had varied. Rocket Rumble, where you throw as many fuel cubes into your rocket ship before the timer expires, and Attack Riders, where you can use a motorcycle to bash opponents and to score as many coins as possible, are fun, for example. Battle Arena has you beating up other Kirby using the skills you unlock. This is fun, as it requires a bit of strategy since you need to knock out all of the Kirbys at once to win. Adapting skills for use in these mini-games are fun in general and spices things up.

But while some of the mini-games are fun, others are just kind of easy or boring. Apple Scramble, where you throw apples into a trap door where your partner is supposed to pull the lever, is rather boring, for starters. I liked the idea of Crazy Theatre, where it asks you a question and you have to answer quickly, but the execution is a bit too simplistic and easy.

Kirby Battle Royale comes off as a fine, but barebones title overall. Fun can be had, but it’s fleeting, and replay value is very limited. I rather like the idea of a Kirby mini game collection where you can play using various Kirby copy abilities and battle it out amongst friends. While Battle Royale lets you do just that, it feels like a concept or an idea as opposed to a full-fledged game. This is fun to play over a weekend, but not much beyond that. 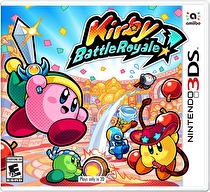