Hack and slash your way through two wonderfully designed campaigns.

While Gauntlet brought hack and slack games into the spotlight, it was the Diablo series that brought them into relevance for me. I’ve spent an unimaginable amount of time slaying legions of monsters and dungeon crawling my way into the depths below Tristram. Diablo aside, my experience in the genre is limited, so with the arrival of Hammerwatch on the Switch I was excited to see a different take on something familiar. However what I found was quite a bit different, mainly being more simplistic, it still managed to sink its hooks into me. There are a few hiccups along the way, but at the end of the day it does much more right than wrong. 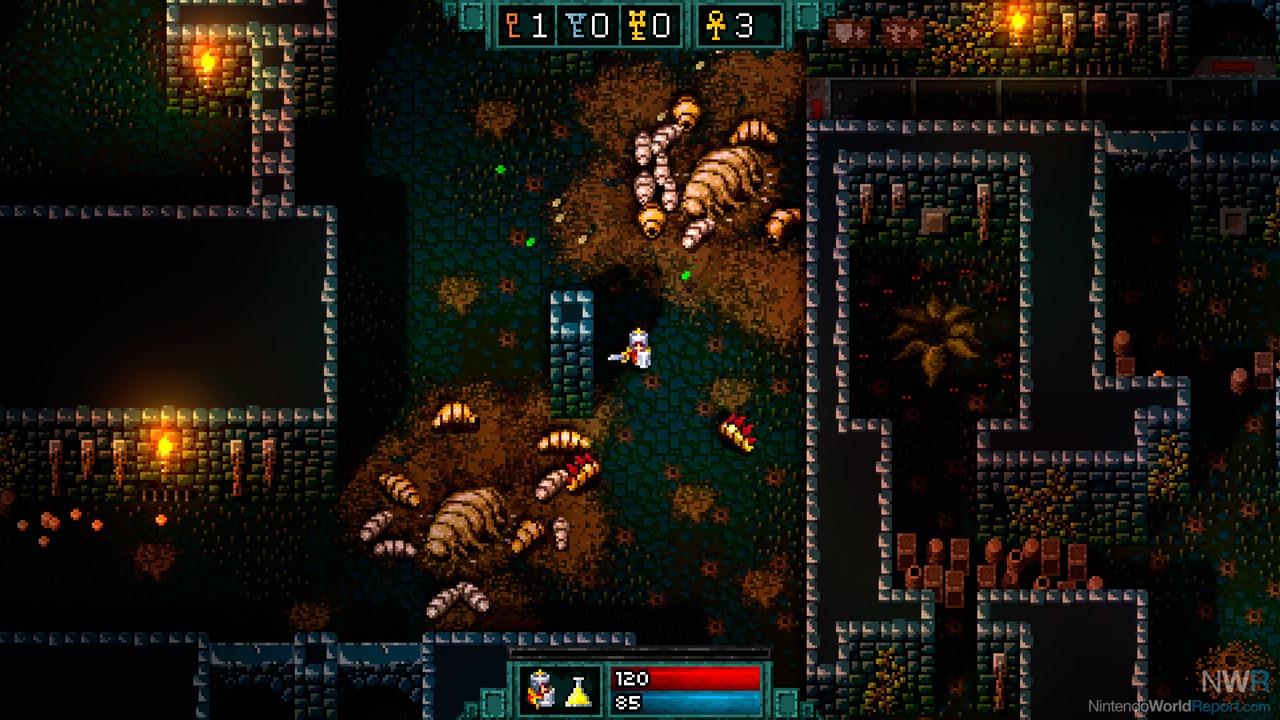 Hack and slash games are generally pretty straight forward, at least from a control aspect, and Hammerwatch is no different. Within just a few minutes of grabbing a controller you’ll have a complete understanding of how the game works. Moving the character is as simple as moving the left stick and attacking is done by taking aim with the right stick and pressing or holding down the R trigger. Using the L trigger will unleash a special attack, but it comes at the cost of your magic meter. At the onset of the journey there are seven different classes to choose from depending on your preferred style of play. Ranged are more beginner friendly while melee proved to be much more challenging, at least in a solo environment. While there’s obviously a big difference between the two main types, there’s enough difference between each class within ranged and melee to promote toying around. There are a number of different upgrades to bolster your arsenal such as improving damage output or increasing the health meter, but what I found the most interesting were the combo upgrades. By successfully chaining together kills within a short period of time, a temporary increase in movement and attack speed is awarded. This boost can be a game changer, turning rooms once filled with hordes of enemies into a complete ghost town in a matter of just a few seconds. I was always elated to see the combo vendor to see what new abilities I could unlock to further my characters power. 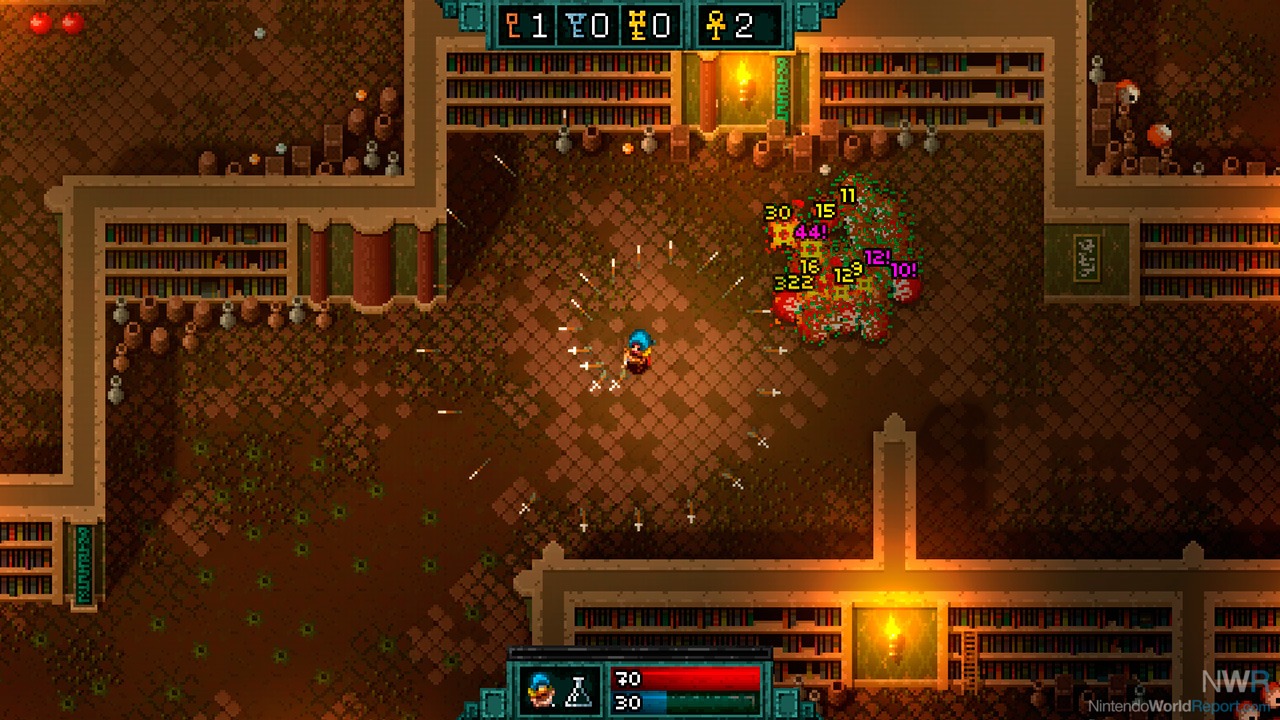 While a few different game modes are available the clear focus is on the two campaigns. Don’t be discouraged by the lack of campaigns like I initially was because these are beefy experiences that easily surpass five hours each. They’re tough to finish especially when later sections start to really ramp up the difficulty. Each campaign offers a unique setting and puzzles that accompany it. The first is a medieval castle and the second is a vast desert area that requires a bit more exploration. I was pleasantly surprised when starting the second campaign to see it didn’t follow the same formula as the first, which could easily have been recycled with the fresh aesthetic. I found the level design to be really stellar in each, handcrafted to present fun areas filled with challenging enemies and some light puzzle elements thrown into the fray. I loved the design, but one downside of the levels not being procedurally generated is that after completing each campaign there isn’t as much of an incentive to revisit the areas. This was a disappointment considering there are seven different classes to use. There’s an option for online play, but sadly at the moment it isn’t available, so any co-op will be restricted to local at least for the time being. Also included are Survival and Hero Defense modes. The former tasks you with clearing out area after area as the difficulty increases and the latter has you protecting civilization from an endless onslaught of enemies.

Pixel art has become increasingly popular among the indie scene with varying degrees of success, but fortunately developer Crackshell nailed the look and feel. Environments in both campaigns are detailed and look wonderful, making exploration a true joy. Character and enemy design while simple, fit well within the world. Boss fights feature some good designs and for the most part fun fights, but there were a few clunkers along the way. The music really enhances the mood but the loops would come to an abrupt end before starting from the beginning and I found this to be a bit jarring. The game runs well in docked and handheld, but I did experience a few crashes. Fortunately they were around the time I had hit a checkpoint and I ultimately didn’t lose too much progress, but could have been a big issue had the timing not be so kind. 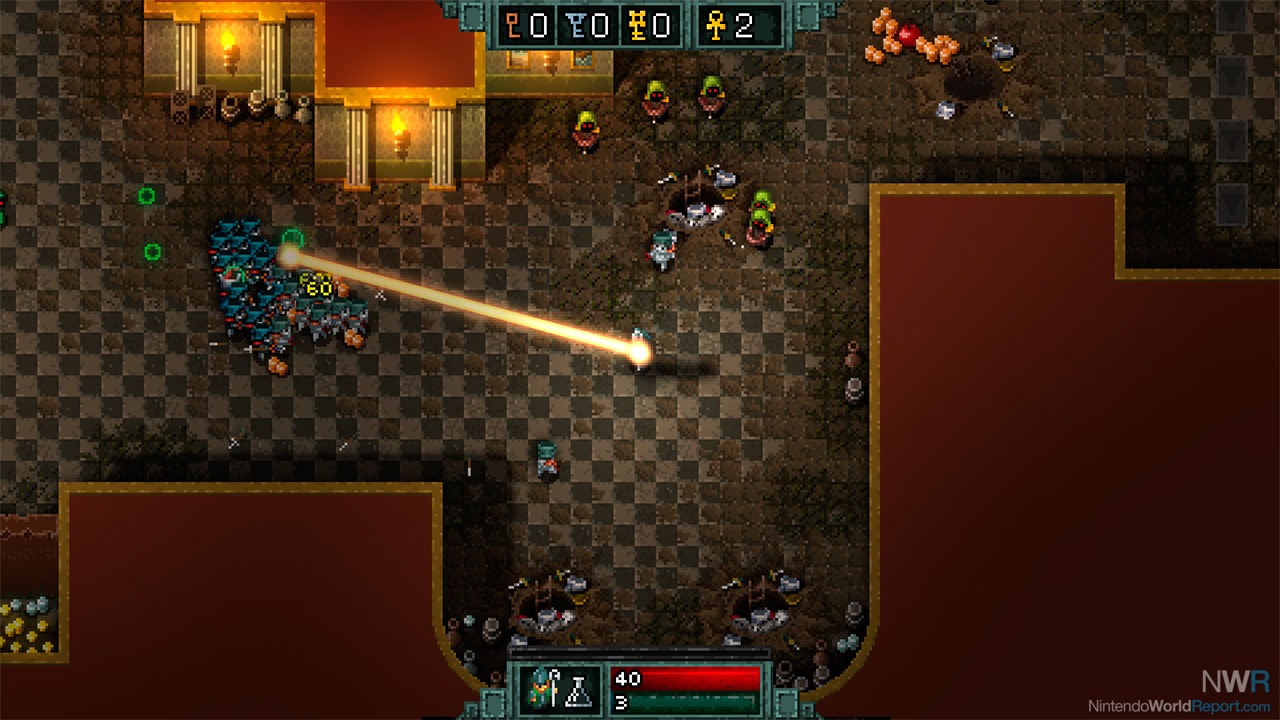 When I first picked up Hammerwatch I was expecting it to scratch the Diablo itch, but it ended up scratching an itch I didn’t even realize I had. The wonderfully crafted campaigns present both fun and challenging tasks that can be tackled in a number of different ways depending on which of the seven classes you choose. It’s likely that the game will run thin before really messing around with all the classes, but the soon to launch online mode could help elevate that feeling. Even with a few blemishes with the music and a couple of crashes, the hook of exploration and monster slaying kept me crawling back for more.