Slain: Back From Hell (Switch) Review

Who knew a game inspired by Altered Beast could be good?

Slain: Back from Hell has had quite the journey since it was first announced on Kickstarter at the end of 2014. Inspired by side-scrolling, hack and slash games such as Altered Beast, Shadow of the Beast, and Ghosts 'n Goblins, Slain! caught the attention of many thanks to its intricately detailed pixel art. However, after it was released to negative reviews in 2016, the developers, Wolf Brew Games, went back and reworked the game and rereleased it as Slain: Back from Hell. Nearly a year later, the game has made its way to the Nintendo Switch. 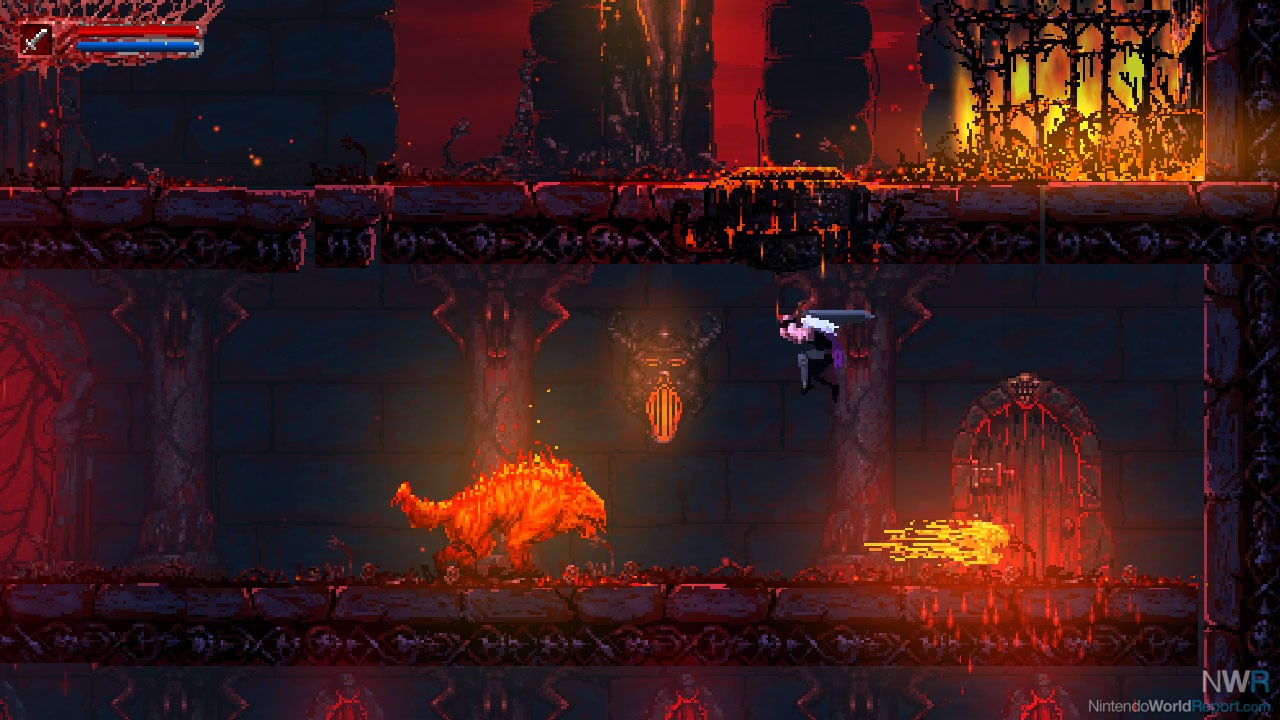 Slain: Back from Hell follows Bathoryn, an undead warrior who has been awoken from his tomb to combat the demonic overlord, Vroll. True to its retro inspirations, the story provides little more than motivation to keep the challengers coming. Where the game truly shines is in its presentation. Slain is a stunning game to see in motion. The animations of Bathoryn and his enemies are fluid, and the detail present in the pixel art for both the characters and the backgrounds fit the game’s gothic inspired art style perfectly. Moreover, the game is filled with copious amounts of gore. You’ll be as accustomed to Bathoryn’s insides as you are his outsides by the end. Nothing really feels dated about Slain’s visuals as can be the case with so many other retro-inspired titles.

Where Slain starts to feel a bit dated is in the gameplay, but not in a bad way. It borrows a lot from the side-scrolling, hack and slash games that inspired it. Bathoryn can do a simple combo attack with his sword. Likewise, you can charge the blade to have him lunge forward to take out his enemies. If an enemy is too close for comfort, you can parry and counter their attack for more damage. For long distance, Bathoryn can use a magic missile style attack that requires mana which can be obtained through countering attacks as well as using the charged attack to kill enemies. The magic attack can also be charged for a room-clearing effect. Furthermore, you can apply fire and ice elements to your sword to do more damage to different enemy types. Despite, or maybe because of its simplicity, the movement and combat feel fluid. I never had any problems with imprecise controls while playing the game in handheld mode. However, I would recommend against playing Slain while docked, as the wireless controller presents noticeable input lag. Timing and countering enemy attacks are a must to succeed at this game. 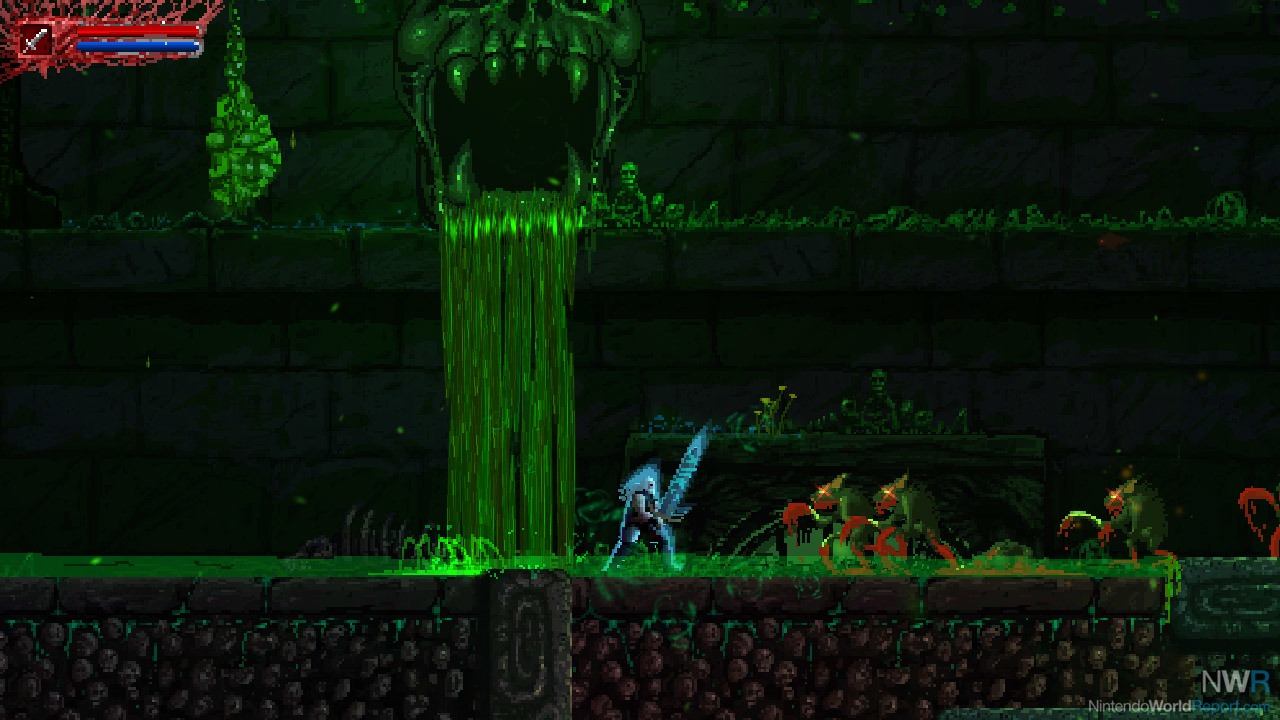 The areas of the game are all separated into two types of levels. When you first choose an area from the hub world, the level starts out incredibly linear. The objective is simply to move from the left side of the screen to the right while taking out enemies and doing some rudimentary platforming. Slain keeps these levels from getting too repetitive by throwing the enemies at you in sequences that you cannot brute force your way through. You need to plan your timing and attacks or else you won’t be able to advance to the interior sections of the levels. These sections are a bit less linear as you have to find switches to activate platforms or interact with the environment to progress. You’ll die a lot in both sections from hordes of enemies, difficult mini-bosses, and instadeath traps. However, only rarely did I feel a death was cheap. I learned from most of my deaths and became a better player. Slain forces you to grow by upping the number of difficult enemies you need to defeat to proceed. There is no leveling system and Bathoryn does not get stronger, you simply learn how to deal with enemies that you may have struggled with at first. The same is true for the boss of each area. I died several times fighting every boss in this game, but each time I got a bit better until I was able to defeat it. The bosses are well-designed and are worth learning their patterns. Luckily, deaths are not a hindrance in Slain, as there are lots of checkpoints scattered throughout levels and you respawn fairly quickly. 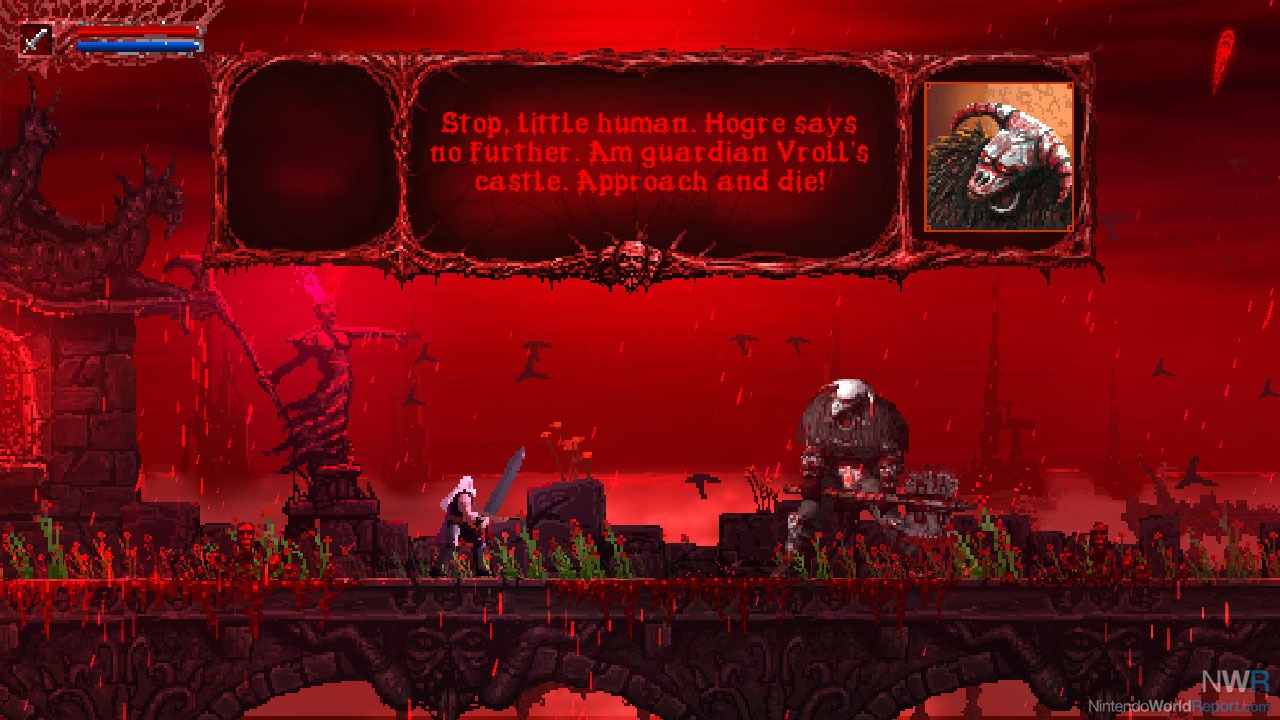 Slain: Back from Hell is not a game that everyone will enjoy. It’s difficult and requires a lot of patience to see it through to the end. It’s also not a very long game. My first playthrough clocked in at around seven hours, though better players could certainly finish it more quickly. There’s also nothing new to do once you’ve slain Vroll. But if you have a thing for the difficult platformers of yore, Slain: Back from Hell is a satisfying blend of what made those games great.