Originally making its debut on the 3DS eShop in 2012, Mutant Mudds has since seen ports to various consoles as well as a devilishly difficult follow-up title, Mutant Mudds Super Challenge. This collection includes both platformers alongside a reskin of the 3DS arcade puzzler, Bomb Monkey, dubbed Mudd Blocks. While lacking the stereoscopic 3D that its 3DS brethren bolstered, the Mutant Mudds Collection does add online leaderboards for each game, including both friend and world rankings. With three great games included, this collection is a great fit for any platforming fan looking for a fun challenge. 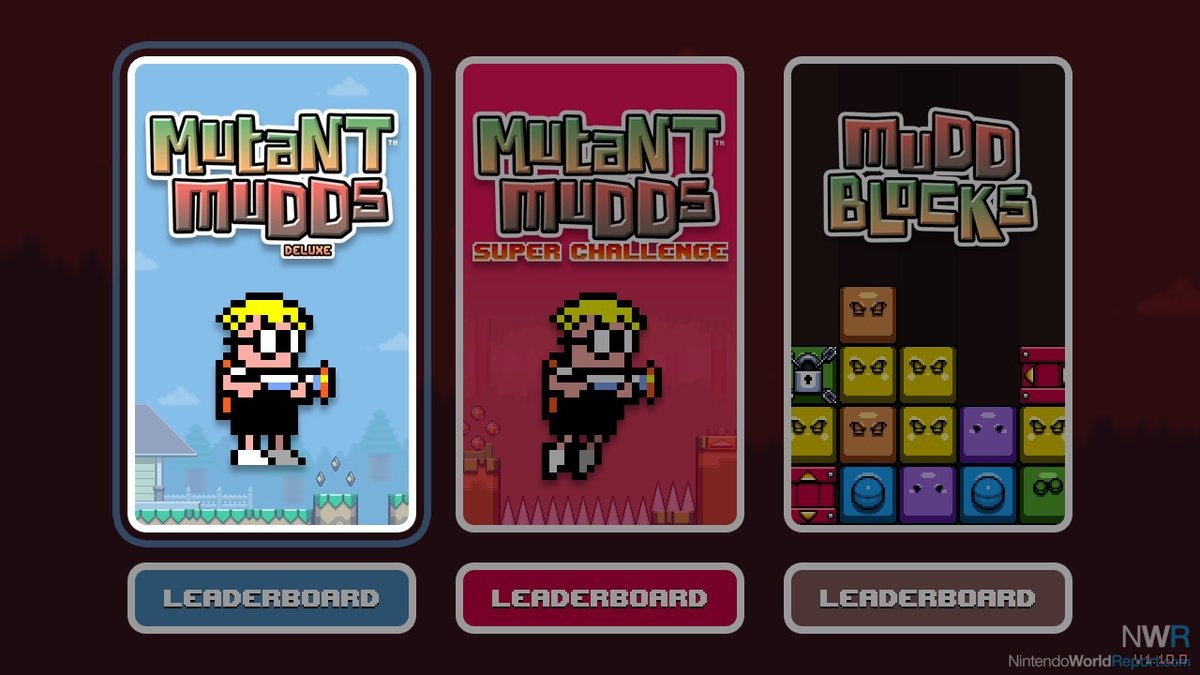 Taking inspiration from classics such as Mega Man, Gargoyle’s Quest, and Virtual Boy Wario Land, Mutant Mudds is a retro-styled platformer with precise controls. With just a few tools in your belt, you’ll jump, hover, and blast your way to the end of each stage in order to collect the Water Sprite. Movement is more akin to Mega Man, with an emphasis on slowly and methodically working through each stage. Despite the limited skill set, it’s extremely satisfying to traverse each stage, all filled with demanding platforming and a litany of enemies stationed about to ruin your day. While combat isn’t the focus, it adds great balance to the gameplay especially when used hand in hand with strenuous jumps. The ultimate goal is to reach the end of each stage, but 100 diamonds per stage are laid out to collect as well as secret exits to find. These secret exits require the use of power-ups, which are unlocked by collecting diamonds, and lead to the most difficult stages in the game.

Super Challenge is the follow-up to the original, but this time around it focuses on packing a serious punch, and a serious punch it packs indeed. Running on the same engine, the controls and look of the game are identical, but the difficulty level is ramped up tenfold. Where in the original the very tough levels were rewards for finding a way into the secret exit, now every level has that degree of challenge and then some. Death happens often, in fact so much that a death counter keeps track of all the lives lost throughout your game file. This could turn some people off, but downtime between death and restarting is minimal, relegating your frustration to how difficult the game is and not at lengthy load times. New to Super Challenge are ghost levels and bosses, both offering unique challenges not seen in the predecessor. It should not be understated just how punishing Super Challenge is. It’ll continuously beat you down, but for those willing to see it out, it’s a rewarding experience. 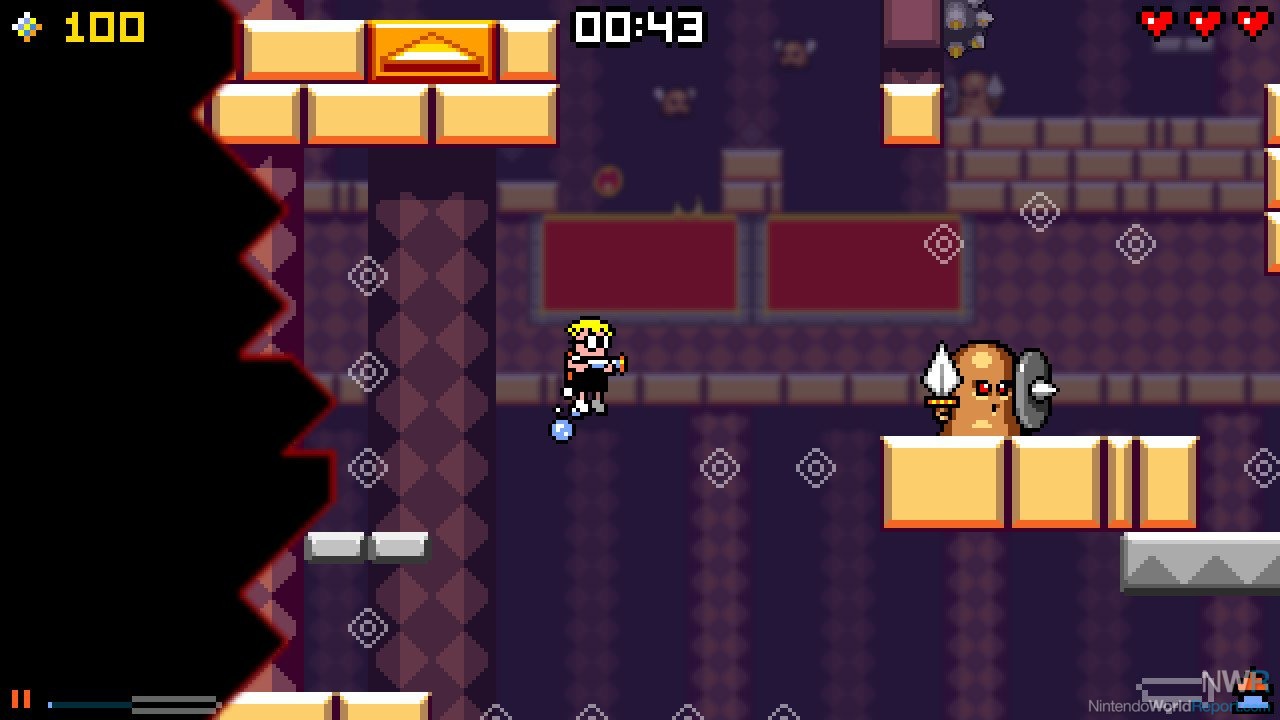 Visually, the games all look great, especially when playing in handheld. The art direction, much like the gameplay, takes inspiration from the classics featuring beautiful sprite work and interesting environments. A great mechanic present throughout both games is jumping between the background and foreground. It’s fun to see how being on different planes affects what’s visible and how challenging platforming is. However this is also where my only real complaint with the collection comes from. The stereoscopic 3D really made these sections stand out as something truly special, but without 3D it loses that feeling. A few enemies move between planes and while you can still tell their location, it isn’t as easy to deduce without 3D. The soundtrack is absolutely superb throughout, often leaving me humming these cheerful chiptunes for hours on end. Of course a major concern with ports is how the software runs on hardware it wasn’t originally developed for, but luckily no need to worry here. Each game runs perfectly whether it’s docked or handheld mode, with no noticeable downgrade over other versions. 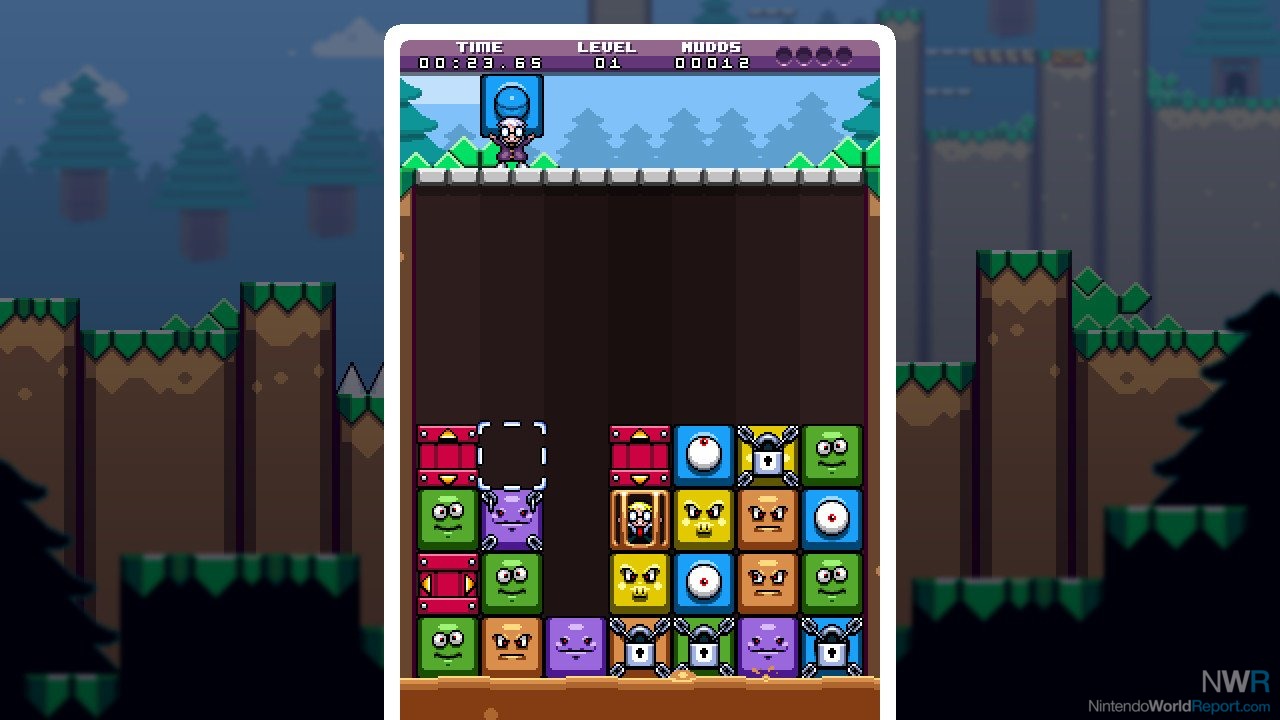 Thrown into the mix is a reskinned version of Bomb Monkey, a small arcade puzzle game. This color-matching block game is simple at its core, but can become quite addicting. Drop blocks from the top of the screen and try to line up colors in a row. When you get a bomb to drop, it’ll explode and any blocks touching it will set off a chain explosion eliminating blocks of the same color. The main objective is to not let blocks stack to the top of the screen, but a few different modes vary up the circumstances. Rescue is a game mode where a character must be freed from cage that must be blown up with bombs. Two players can also play against each other, which works well for Switch. My favorite option is rotating the screen for vertical play, utilizing the Switch’s screen in full instead of wasted black space on either side when in the traditional horizontal perspective. The online and friend leaderboards throughout the entire collection give a great reason to revisit levels in the main game modes, but works exceptionally well with the arcade style gameplay in Mudd Blocks.

Mutant Mudds has seen ports to just about every console under the sun (with good reason), so I figured it’d only be a matter of time before it graced the Nintendo Switch. What I didn’t expect was to get Mutant Mudds, Mutant Mudds Super Challenge, and Mudd Blocks all in one convenient package. With the great gameplay of three games present and brand new leaderboards for each game, this is the ultimately collection for anyone interested in the Mudds franchise. The lack of stereoscopic 3D is the only blemish, but hardly enough to diminish an otherwise fantastic offering.