A musical and sports mini-game collection may not be the perfect combination, but rhythm fun is still to be had.

Super Beat Sports is the latest title from Harmonix Music Systems, the creators of Rock Band and Amplitude. The Switch game is an upgraded version of Beat Sports that originally debuted on the Apple TV back in 2015. Fans of the rhythm genre will enjoy the game’s kickin’ beats, but may ultimately be dismayed by the lackluster single-player mode. 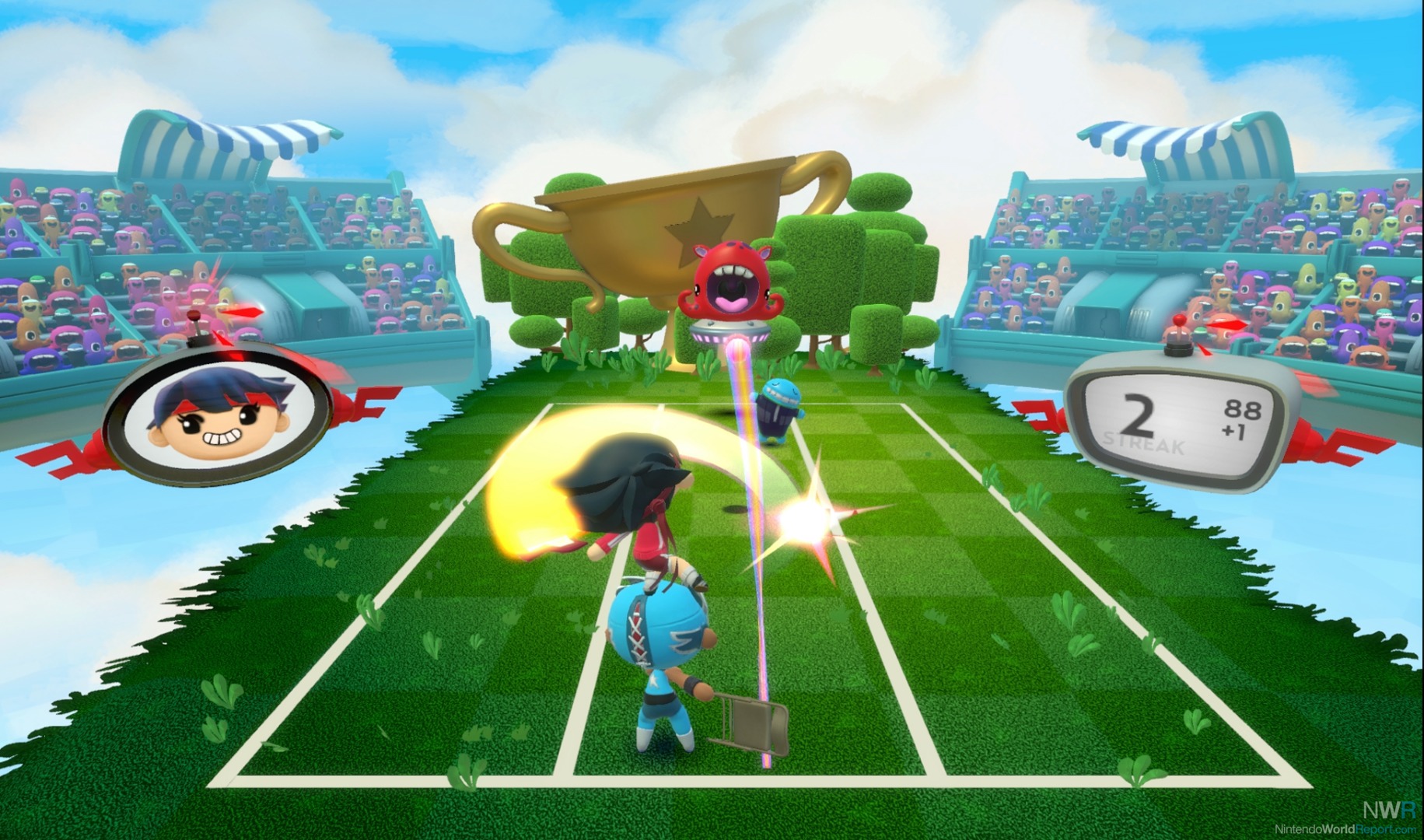 Five musical mini-games are available to play, all featuring a multiplayer component. Players have a choice of controlling the action via a button press or with the swing of a Joy-Con. The game’s colorful and eccentric cast of humans and aliens are very cute and seem like they could have been pulled out of an episode of the Powerpuff Girls. As players progress, they can unlock a variety of unusual objects to play with, ranging from garden gnomes to guitars. However, the different rackets don’t have any effect on the gameplay.

Whacky Bat is likely the first mini-game you’ll play when you boot up the game. In the baseball-inspired mini-game, multiple aliens will pitch you baseballs and you must swing at them to the beat of the music. Adding to the difficulty are multiple lanes from which the aliens can throw the baseballs, so you must quickly move left and right to the appropriate lane. This mode strongly reminded me of Rhythm Heaven.

Gobble Golf is a very unusual take on golf featuring memorization. You’re presented with multiple floating platforms that feature an assortment of aliens. Before swinging, you must carefully watch the aliens sing. Once you know the alien’s musical order, it’s your turn to knock golf balls into their mouths during their refrain.

Net Ball is a musical adaption of volleyball. Like the other modes, the goal is to hit the ball to the beat of the rhythm. This mode is played in a doubles fashion with one alien ally and two aliens opponents on the other side of the net. At random points during the match, your ally will set the ball for you and give you a chance to spike it. To successfully spike you must hit ball after a brief countdown, which is shown visually on-screen.

The mini-game that arguably requires the quickest reflexes is Buddy Ball. In this mode, you and your opponents must bounce a ball against a trio of aliens and then survive the longest by keeping your heart meter intact. Depending on which type of alien you hit, the ball will bounce off them in different ways. Missing a volley is the easiest way to lose a heart, but this mode also has items like exploding bombs, which can cause damage. 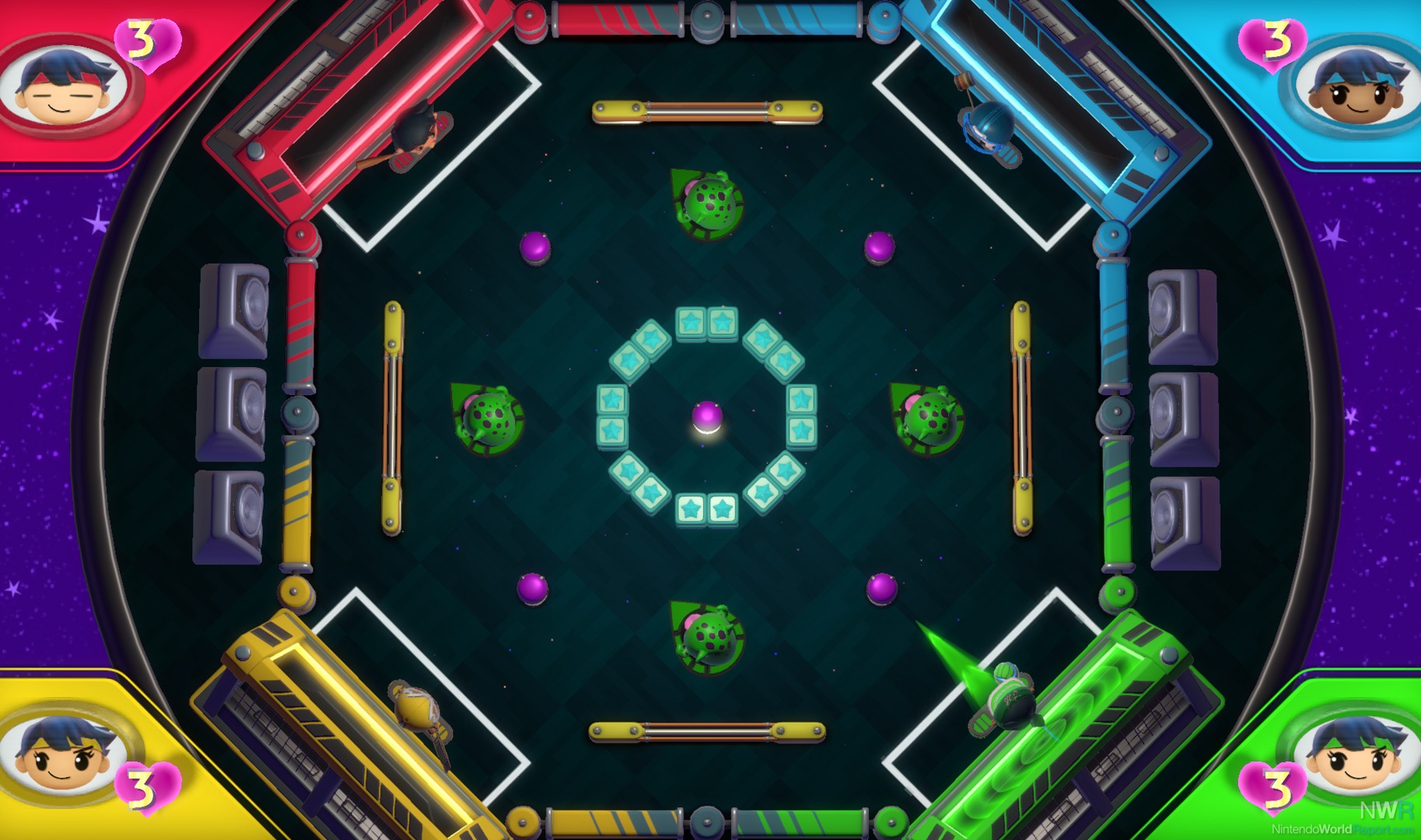 The final game mode is Rhythm Racket, which is sort like air hockey on steroids. This mode can either be played 1-on-1 or as a free for all with four players. Each player stands in front of their goal and must defend it while also knocking the incoming shots out onto the playfield. There are multiple surfaces to ricochet shots around and those same surfaces actually move around and reshape themselves at different moments of the match. To help defeat your opponents, players can also pass the ball to aliens scattered on the course who you temporarily take control of and can aim your shot from. This mode makes for some fast-paced fun and should please those who’ve wished for an insanely hectic version of pong.

Super Beat Sports is a fun, but overall very simple compilation of games. While many of the modes have multiple single-player challenges to complete, they quickly become repetitive and are missing the charm, range, and cleverness that you might find in a Rhythm Heaven game. This mini-game collection is best when played with friends and family who want to test their reflexes in a musical fashion. It might not be a game you play a lot, but it can provide an hour of fun when you have company over.

I liked the demo, so I will buy it. But its clearly not as good as Rhythm Paradise Megamix.

I think this game is great fun as a Rhythm Heaven enthusiast. Of course, nothing really compares to RH and I'm starting to think nothing ever will as these Rhythm games don't put the not-so-hard-to-surpass effort Nintendo SPD put into Rhythm Heaven. And even if anyone does, the charm in those games is far too strong.