Rock ‘N Racing blows a tire on the Switch. 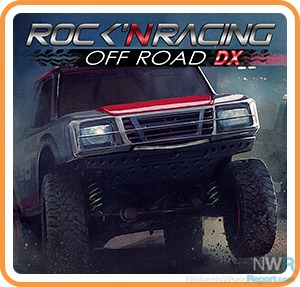 If you’ve got a hankering for some classic top-down, single-screen, arcade racing the resurgence of these sorts of games in the indie scene is likely quite a blessing. Borrowing from the likes of Super Sprint and Super Off-Road Racing, this distinctive style of racer was very popular in the game rooms of yesteryear. Rock ‘N Racing Off-Road DX looks to capitalize on this enthusiasm of classic gamers and adventurous folks alike, but it’s unfortunately shaky off the line.

Starting with what’s positive, the aesthetics of the classic style are mostly intact, and since they’re rendered in 3D they actually look a bit better, though still a little on the primitive side. All of the tracks have hills and bumps you can clearly see and the surface is bump-mapped to give it a muddy look. The vehicles themselves are generally not very detailed but have at least a little personality and around the edges of the track there’s some decent theming going on to bring you the track experience. Through the 5 cups of the Championship Mode you’ll race on 4 tracks a piece, though the generalized layout of tracks will begin to repeat about half-way through moving in the opposite direction and with some different hilly details. You’ll also be able to participate in Time Trials on your unlocked circuits, competing on the worldwide leaderboards for top times, and you can also partake in Local Racing with up to 3 friends as well. 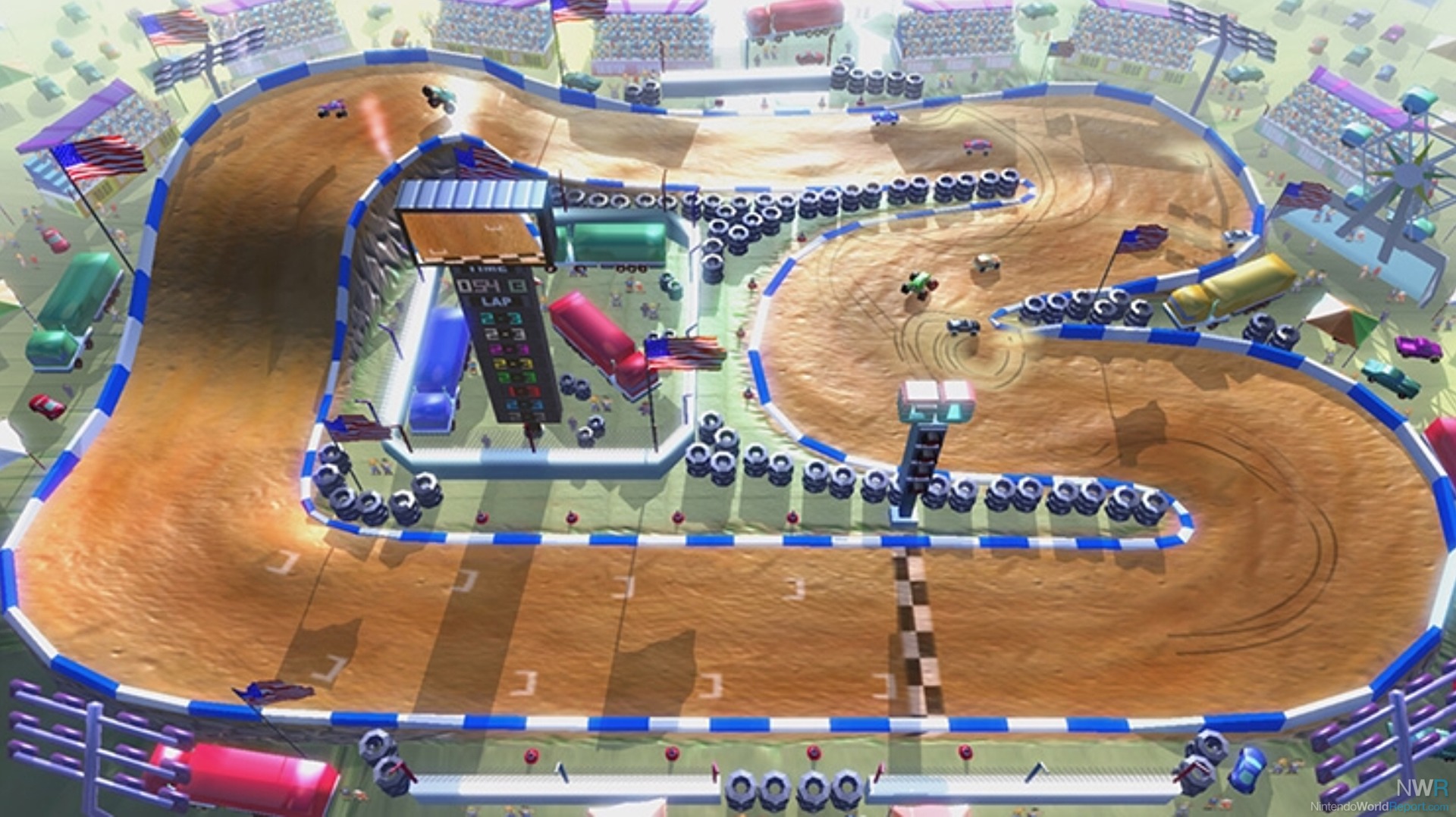 The racing isn’t exactly stellar, I found it very highly dependent on the class of cars and the performance of the AI drivers which can be weirdly inconsistent. Starting with the computer driver AI I would have some races where it would do well and throw up a real challenge but then others where, I won’t lie, the majority of the CPU pack wouldn’t finish the race as some would stall out completely and others would get caught up with peculiar issues. In terms of handling the physics, the game can be quirky in general and when you throw that on top of the characteristics of specific vehicles it gets a bit more pronounced and that’s not necessarily a good thing. Specifically, I found both the Buggies and the Monster Trucks to be problematic in terms of control, encountering enough trouble with them that I generally opted not to use them and stuck with Highlander the majority of the time. This left the somewhat unusual physics from landing your jumps and sometimes catching the track funny to more of a minimum. In particular if you collide with other vehicles or the walls at the wrong angle getting back in the swing of things can take quite a lot of effort, and will typically lose you a substantial amount of time. Turning around, controlling in reverse, it’s all just a bit strange and I can’t put a finger on it beyond saying it makes any crash potentially a big timesink. 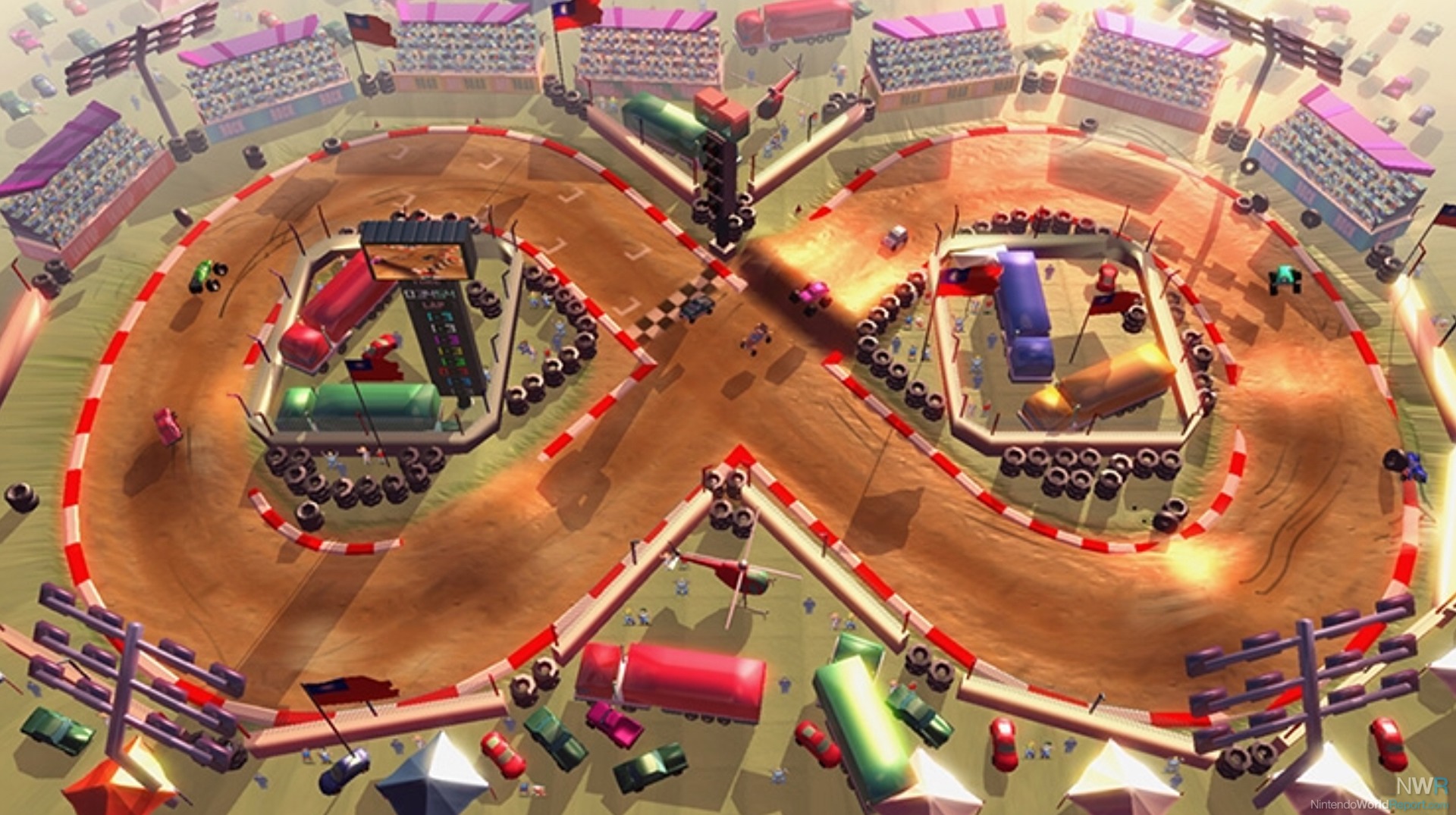 Since there are tracks that have a lot of deliberate cross-overs, this will require you to be even more cautious in these areas. Taking an element of unpredictability that I actually relish (I love Figure 8 track racing in general) and making it a bit more complicated than I think is intended. Even when you’re on your own and doing fine the way you can sometimes land or catch an edge in a turn is quite peculiar. This makes it one of the things I enjoy about the game, the relatively diverse track design (given how simple a game this is overall) you run into, a set of mixed blessings. For every element that keeps it from being too flat and boring there’s a degree of unpredictability. Certainly by braking you can and should reduce some of these risks, but when I tried to play around at different speeds the peculiar way you’d fly off of jumps would still be an issue even at lower speeds. It’s just a bit odd at times. My main criticism of the track in terms of a lesson not learned from the classics that the game emulates is a lack of risk/reward short cuts which were almost always a staple. I saw one case there was a hole in a row of tires on a track but it was so subtle I actually wondered if it was meant to be there or an accident.

Keeping in mind the budget price, Rock ‘N Racing Off-Road DX is a tough one to call. It makes fair attempts at providing some variety with multiple track layouts mixed with jumps and uneven terrain but at the same time racing physics being tricky at times can make for unintended challenges. While there is likely an element of personal taste to control in the 5 vehicles, I found that the Highlander class (the first you’ll unlock) to be far superior to most everything else in terms of overall performance and handling. It may just take some tweaks but collisions are inevitable in the game and can royally screw you up, more than I’d expect. This can detract from some of the fun of the tracks that overlap themselves and that’s a shame. While there are some positives to be had in the game it’s also quirky enough that it’s tough to recommend.

For a split second, after reading the article title, I thought this was a sequel to Rock 'n' Roll Racing for the SNES. Got excited for a second there. :p