It's dangerous to go alone! Take this stick.

Developer Ludosity is at it again, with Zelda-inspired Ittle Dew 2+ finally arriving (appropriately) on a Nintendo platform. Having not played the first game in the series I was intrigued to see just what the game was all about. All I really knew was that it was heavily inspired by Zelda, (with the original Ittle Dew being pitched to Nintendo as an actual Zelda game) but I didn't know to what extent the inspiration influenced the final product. Though not with its flaws, as a fan of old-school dungeon puzzles I definitely enjoyed what Ittle Dew 2+ had to offer. 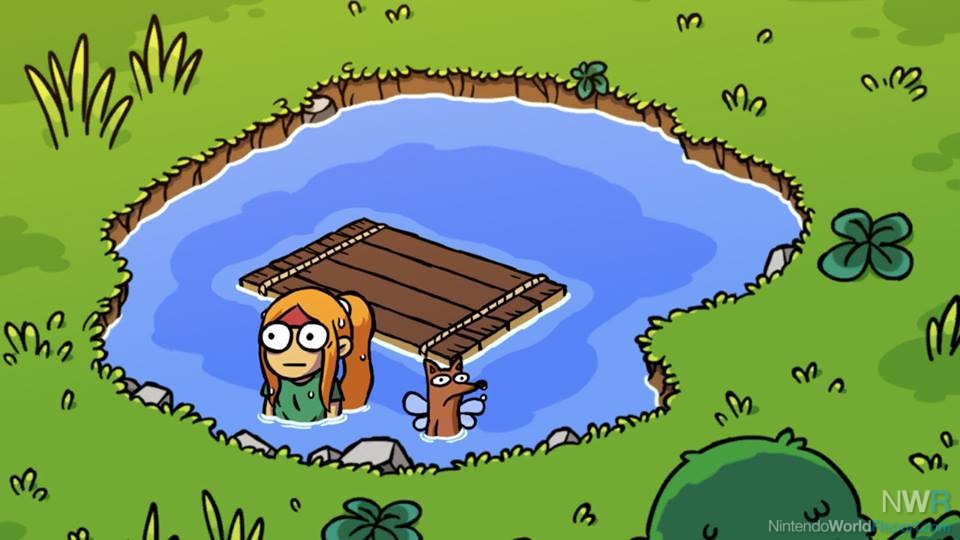 One of the first things I noticed was the game's sense of humor, starting with the dialogue between the main characters, the protagonist Ittle and her fox sidekick Tipsy. The art direction really pulls it all together, with a cartoon style of characters and enemies that look like they were pulled out of a bizarre children's book. These enemies range from pathetic platypi to macho cacti, and that's just scratching the surface of absurdity. The overall tone is silly and wacky, with almost all characters breaking the fourth wall any chance they get. It seems that there is an actual living world existing around you and I genuinely laughed out loud at a bunch of the ludicrous scenarios I seemed to stumble upon. Even the basic plot is ridiculous, for you are trying to build a raft and need to collect a broken board from each dungeon. There really isn't any level of seriousness included in the game, so consider this your warning for wackiness. As for the soundtrack, throughout the game it ranged from pleasantly catchy to just plain annoying. Occasionally a quickly repeating melody can add to the frustration when facing a particularly brutal puzzle in a dungeon and I had to turn the sound off, but most of the time I did enjoy the music. 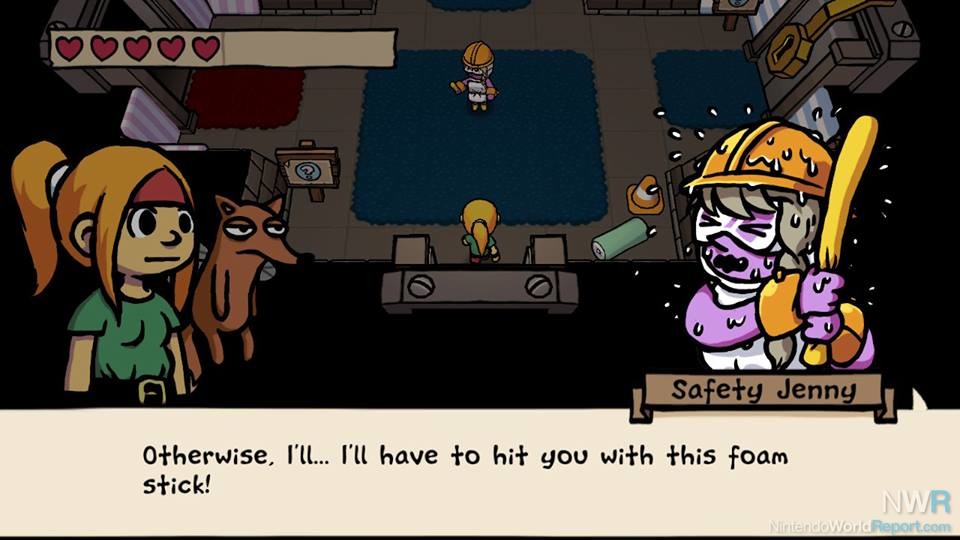 The gameplay is very reminiscent of a standard top-down Zelda game, only with a faster pace. The biggest difference I found was that there aren't any missions or quests in-between dungeons. Perhaps paying an homage to the original Legend of Zelda, the developers allowed the ability to choose which order to complete the first 7 dungeons (In case you're wondering, the order that I completed them in was 1-2-4-7-3-5-6-8). True to form, each dungeon sits in its own aesthetically different part of the world. Having been used to linear experiences, the ability to roam the land from the start was a breath of fresh air. 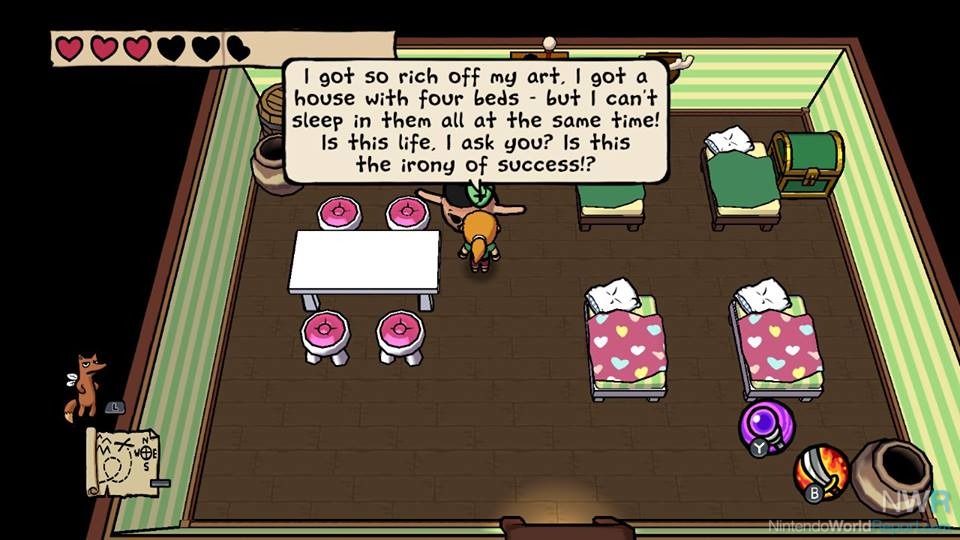 Like previously stated, the game is relatively brisk. My first playthrough of the campaign took about 8 hours to complete (with plenty of exploring in-between but far away from 100% completion). While adventuring throughout the land I stumbled upon many "Optional Cave" maps, that show up on your main map. These caves serve as mini-puzzles that reward you with weapon or health upgrades, and some even have weapons not found in the main dungeons. Acquiring these upgrades added some very much needed spice to the otherwise straightforward gameplay and battle mechanics, which unfortunately seemed to be a big downside to the game. 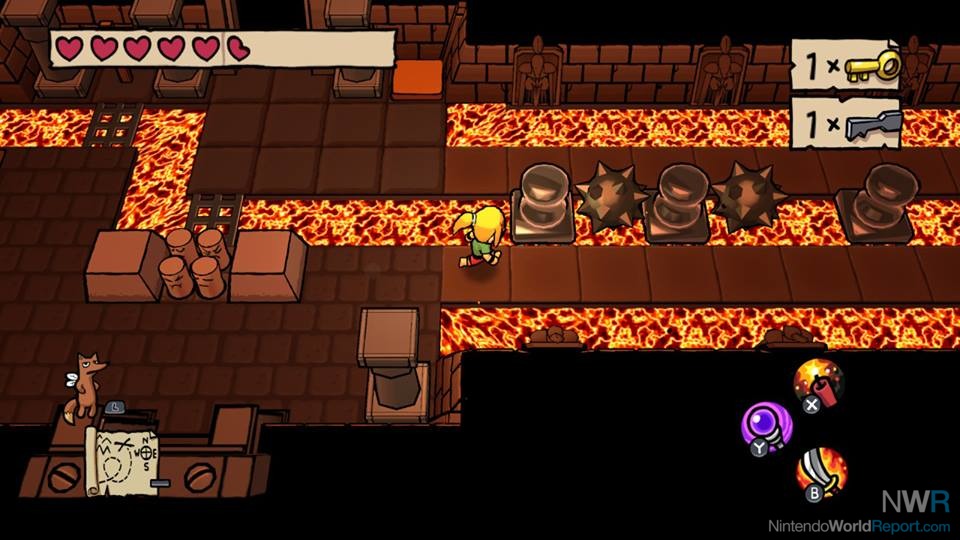 When fighting enemies I found that their attack patterns seemed to feel imprecise much of the time. Many times I would take the same approach to defeating an enemy and because of pure luck I would win. This doesn't just go for the boss fights, but any enemies you encounter. When this happens it feels like the design is working against itself. On one hand, having a quick-moving character who can swing her sword fast can make for a delightfully brisk experience. On the other hand, given many instances, the gameplay feels too fast and I died or fell to my demise in what seemed like 2 seconds. In Zelda games I rarely die, but in Ittle Dew 2+ I died a lot. This isn't necessary a bad thing, but with very few checkpoints there was a lot of time just running through completed points of dungeons just to get to the room I kept dying at. Granted, because the quick speed of Ittle and the relatively small size of the dungeons the time it took to get there is small, but over time I was yearning for a more slow-paced experience where more thought was put into fighting than what seemed like repeated attempts mixed in with a little luck. 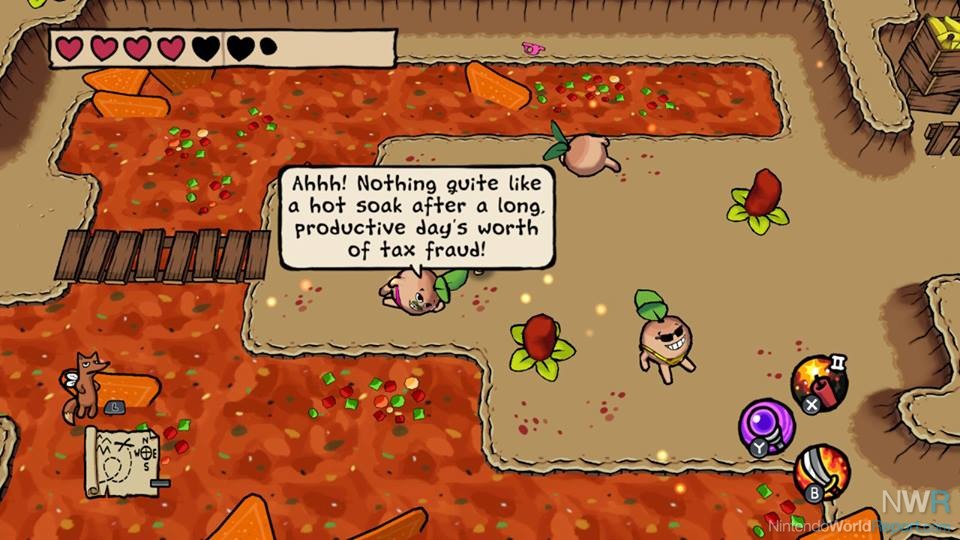 What Ittle Dew 2+ does exceed at, however, is its puzzle designs. Playing through the game shows off the puzzle-design passion of the developers, and clearly is the best part about the game. Included in this 2+ package is the original 8 dungeons and 5 new Dream World dungeons, essentially a new campaign to play through. These are an absolute delight, for these offer insanely well thought-out challenges and puzzles that will test the games mechanics (and your brain) to the limit. Every room teaches you something new about your seemingly simple weapon scheme, and there is really nothing better than finally solving a puzzle that seemed impossible from the get-go. For being extras I was surprised to actually like the dream dungeons more than the original, a very welcome surprise.

Overall, Ittle Dew 2+ is a good game with unfortunate flaws. While the puzzle aspect is top-notch, the action can feel a little inconsistent at times. The biggest problem I felt it faced is its lack of dynamic gameplay. Although it encourages you to explore to find hidden items, the game is basically "Go to this dungeon, now go to this dungeon" until the very end. Besides that though, I really did enjoy my time playing and laughing through the quirky story and it's undeniable charm. Sure it's not exactly Zelda, but Ittle Dew (2+).